Screening minelayers in the Baltic with Flotilla Forward

Flotilla Forward is 70% done.  Finally got off my duff and started to work on the scenarios.  Have worked on raids, convoys and now screening of minelayers.  Still fixated on the eastern front.  Mine warfare was not a big part of Black Sea operations so had to move to the Baltic for this one.  Fortunately I had a flotilla rolled up pre Cruel Seas for my MO-4 boats. They have had 4 missions and have a good reputation. [ works similarly to Squadron Forward]  So...

Capt Lt Marinesko had his orders.  Patrol the outmost mine barrier while several Tral minesweepers tidied it up a bit.  He would take 2 boats with him and the junior captains/crews as this shouldn't be to difficult. 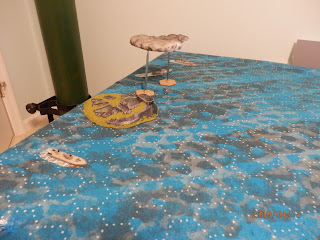 The MO boats on patrol.  Semyon above, Ranacev below and our good Capt Lt in the middle 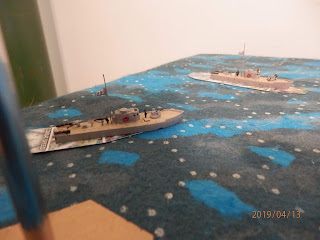 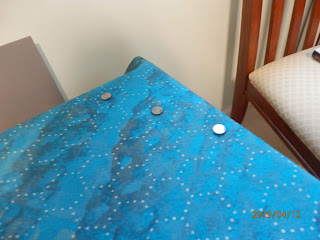 3 blinds enter the opposite edge.  Though Marinesko is green, since he has the "eagle eye" trait he sees as a veteran. 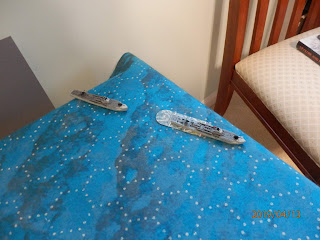 He identifies 2 raum boats even though they look like S-boats. 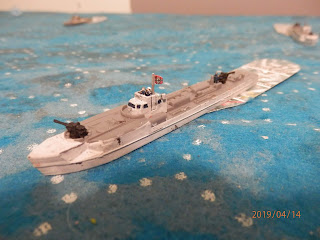 The Germans are excellent at camouflage!  I have ordered Warlords Raum boats though. 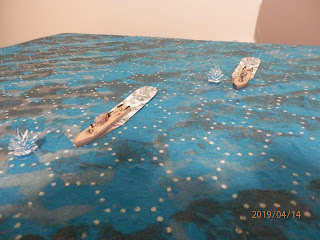 Marinesko orders a starboard turn and Semyon misses it and is late. This will become important later. 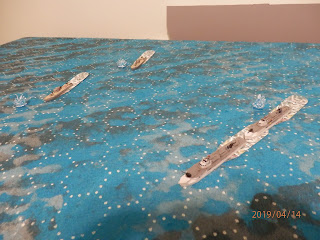 As the battle is joined Marinesko is confident. Lt  Ranacev is coming up to join.  Though the Raum boats are heavier he out guns them.  [ Russian 45mms were poor though so they -2 hps from their dice]   Unfortunatley the German fire is more accurate than the russian fire and Marinesko's boat begins to take damage. 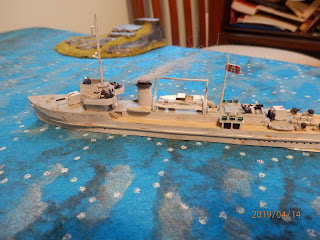 A German minesweeper shows up and begins to shell the Russians from afar with its 4 inch gun. 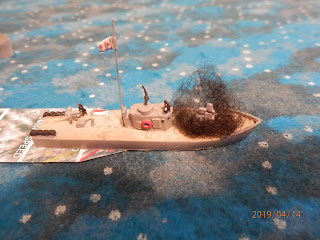 Unfortunately a 4 inch shell finds Lt Ranacev's boat taking the front 45mm gun and most of the bow!
He retires before having even fired a shot at the Raum boats.

Meanwhile a Russian minesweeper arrives to the sound of guns... 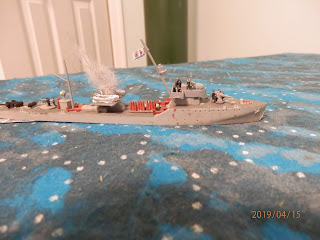 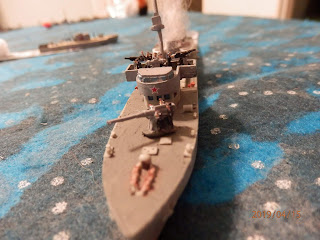 and begins to fire at the german minesweeper.  Unfortunately they are green as well so the odds of a hit at over a mile are slim.  They also start to take damage. 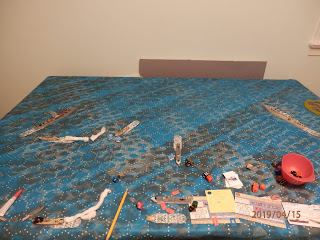 Towards end game.  The minesweepers trade shots.  The raum boats are making a 180 degree turn.  Lt RRanacev is leaving behind smoke.  Capt Lt Marinesko, his ship 66% damaged, has also turned for home behind smoke.  Lt Semyon, since his is not following close behind fails to see the signal and will be delayed in his turn. 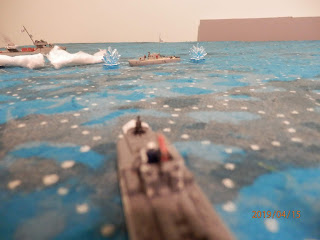 This allows both Raum boats to concentrate fire on him and with some excellent shooting manage to sink him.  Behind the smoke screen neither Marinesko nor Ranacev notice.

The Russian minesweeper also breaks off the engagement.

Fun game that played quick.  With all the russians green and all germans average the Russians were outclassed.   I still gave the germans the win though as the russians did lose a patrol boat.

Post game Lt Semyon's crew is rescued and they are not happy about being abandoned.  Capt Lt Marinesko feels, with some justification, that had Semyon not missed signals he wouldn't have been left.  No one is happy and since Semyon is evil by nature he will not let this die.  He is now trying to undermine Marinesko though Marinesko hasn't realized the extent yet.   Morale in the flotilla has dropped from 8 to 7. Worse, Capt 2nd rank Antov has pulled one of their boats for a separate mission so with 2 boats in the shop and one lost the flotilla is down to 3 boats right now.   Capt Lt Marinesko will have his hands full trying to take this Flotilla Forward!

Bag the Seas or Cruel Hun?

Have been working on Flotilla Forward and painting my Russian fleet.  Also working on air rules for Cruel Seas.   Thought it would be fun to run a Bag the Hun battle and finish with BTH bombing and my new bombing rules for CS to see how they compare.  Sort of a Bag the Seas or Cruel Hun combo game.
Still fixated on the siege at Sevastopol decided the Germans would bomb a tanker trying to break the blockage.  I actually wanted the Romanians to bomb the tanker as I have a Romanian squadron rolled up for Squadron Forward but alas they were withdrawn in 1942. Digging through my squadrons I had a ME 110 squadron on the russian front in 1941.  There was one fast bomber Zerstorer squadron deployed in the south in 1942.  Perfect!
This squadron has not racked up the kills as only 1 of their 5 missions has been a fighter sweep.  Their 2 senior NCO have all their kills ( Katzman 4/ Langman 3) but 5 of them have scored hits by bombing.  They are considered a solid squadron.
Hauptman Eicker looked at the Frago; another bombing opportunity as it was expected Ivan would try to sneak some ships through to the port.  Enemy resistance was expected to be moderate and they would have some escort.  He had 8 planes but only 6 pilots as Blummer had not been replaced and Blocker was still detailed.  All 6 planes would carry bombs but SFW Katzman and UFW Ziezt would be designated to be escort if the need arose.
Characters
Hptmn Eicker    unsupportive/ postion     avg    connected nazi
FW Langman naive/position     3 kills      vet

Mission is Fighter Bomber plus I added 2 escorts. 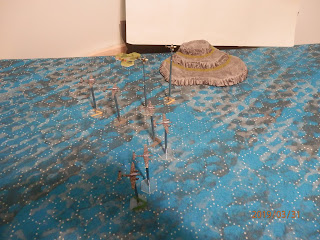 The Zerstorers over the Black Sea 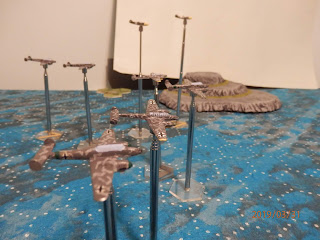 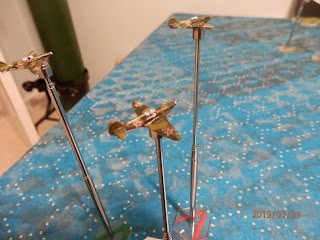 3 Yak-1s manage to come in from behind. 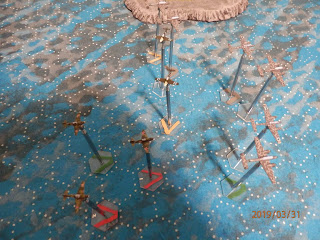 They are spotted but very late.  Lt Lugger arrives to try to knock one off Lt Lamber's tail but one Yak has a clear shot at FW Dobele. 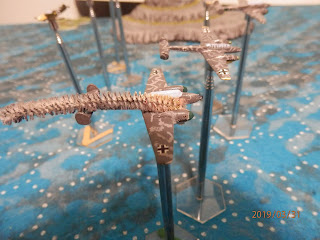 A fire starts on Dobele's starboard engine as he descends.  [ I used my tables from the specials.] 40 seconds later his plane explodes.  No chutes were seen.

Lt Lamber jettisons bombs the other 4 hold onto their eggs and grimly press on.  The ME 109s do their best.   Suddenly several Rata's enter from the right.   Lt Lamber engages... 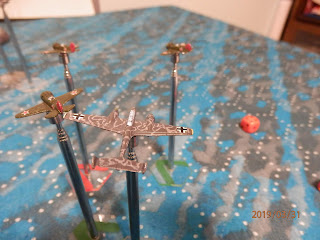 He gets several shots and one is seen leaving the area trailing fuel but no kills. 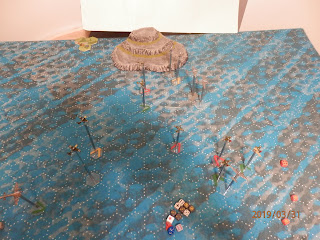 A shot of the melee 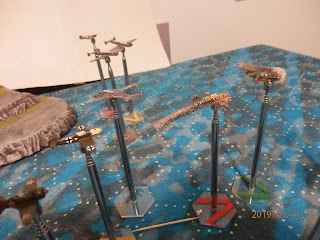 Lt Lugger gets one and SFW Katzman causes a Yak to leave the are trailing smoke but it is only counted as a probable since no one saw it go down. [ engine coolant]  Katzman's achievement is all the more impressive as he is still carrying bombs. 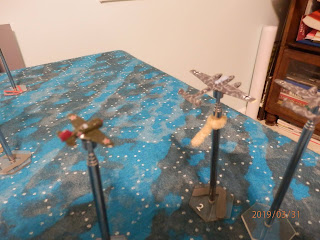 Eicker's plane is finally targeted by a Rata.  He may be an unsupportive connected Nazi but he is no coward.  He keeps leading his men towards the target.  Finally his wing becomes damaged enough that he can't keep trim with bombs on board. 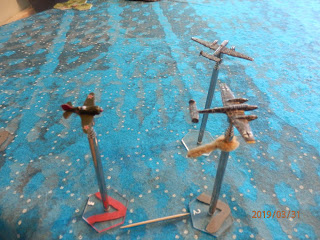 He jettisons his bombs and moves tangentially away but still keeps moving towards the target.  The Rata pulls away only when the flak comes close.    Hptman Eicker scored some points with his men today! 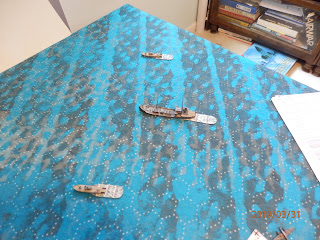 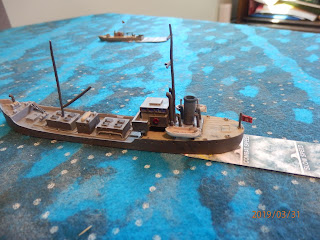 The target    I certainly didn't buy these ships for aircraft targets but they look really cool! 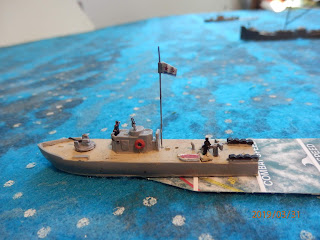 Not the target but still looks really cool.

So I had 3 planes bomb and Lt Lamber strafe a MO-4 boat using BTH2 rules [ plus my Brag the Hun suplement] and then I repeated using my CS mods. 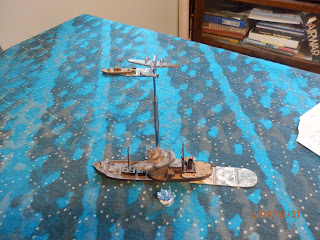 Everybody managed at least one hit.  Of course this was a tanker moving at 10 knots! 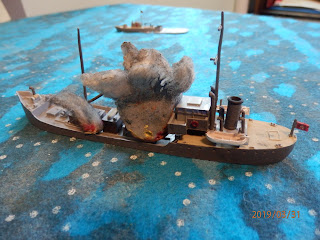 sent it to the bottom!      Mission success.
Lt Lamber was actually driven off from strafing by flak.   Had he managed to hit it he would have done superficial damage. 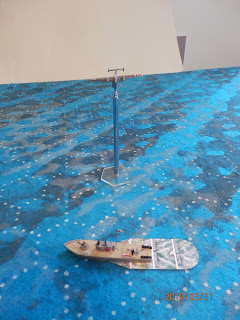 Lt Lamber lining up his shot.


With my Cruel Seas variant Flak again was ineffective but only 1 bomber hit the tanker.  It did 21 points of damage and did start a fire.  I used 7 dice for a 500lb bomb but that probably isn't enough.  There were no near misses.   Lt Lambert strafed a MO-4 causing 6 points of damage and caused an engine critical hit.  Interesting and a good starting point.

For the squadron I used the BTH results so the squadron has it's first tanker sunk.   Mission Success
Their elan increases to 2.  FW Langman is selected for OCS.  I placed a 50% chance of him coming back to the squadron because though unrealistic, it makes a better story.  He will be back after 2 missions with the full support of SFW Katzman who realizes he is not cut out to be an offizer.  As the squadron bids temporary farewell to Langman, Unteroffizer Katchka arrives at the front.  Of course he is green.  Will he learn fast enough to survive?

It was fun to combine the 2 games and easy enough to do so.  It takes a while but that is one of the benefits of solo play; no rush. 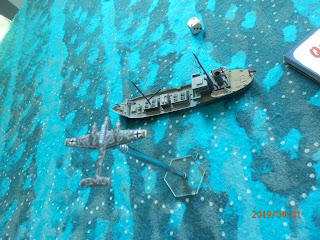