Very busy couple of weeks for me with little time for gaming.  Realized I need some more US troops for my 1st Cav in vietnam if I want 3 figures per squad with 2 companies on the board at once.  So I opened a pack of battlefront figures that I have had for several years and set up a new squad. 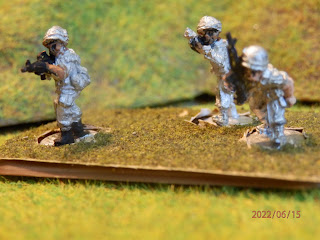 For grins I am using the battlefront base with railroad matting over it.  This will save me building up the base.  Will see how it looks.

Also realized I only had a section of Pattons.  I needed another one so viola! 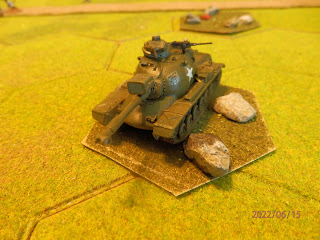 Almost ready for action.  Still need to add the TC figure.  Hopefully you will see these both near a rice paddy in the near future.

So wanted to do something different and didn't feel nautical-- how about SAGA?  I am not much of an ancients guy but SAGA is such a fun game and it feels like how I think ancients should work that I really enjoy playing it.  I am sure if I was more of an ancients devotee the system would seem gamey and upset me but since I am not let's play SAGA!

Pattonus Tankus hoped his men felt the determination that he felt.  The Picts had conducted yet another raid killing more innocent Roman's and Britons.  "We must teach them a lesson they won't soon forget!" he had told his men. 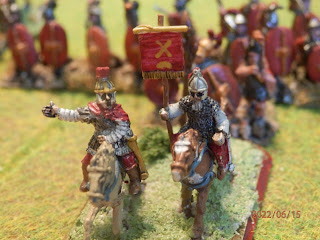 Pattonus Tankus leads a 5 point army as I have to get familiar with the rules.  I use V2 rules but Roman calvary are classed as warriors here as the legion still reigns supreme. 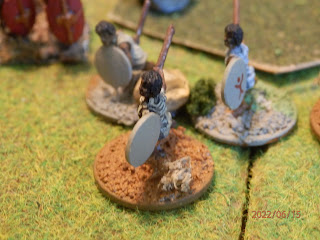 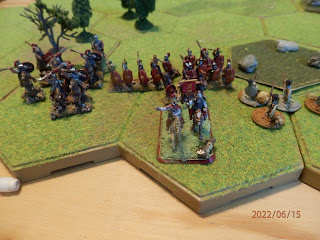 1 pt levy archers [ they split them into 2 groups] 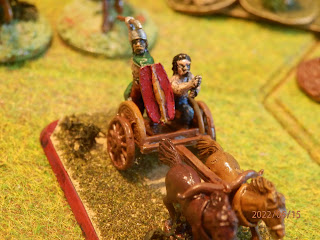 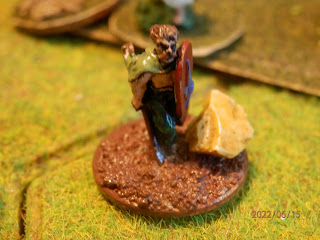 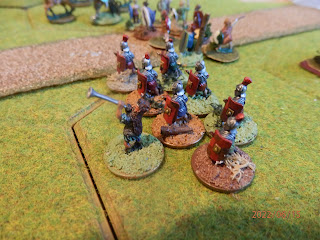 Dastardly roman deserters.   Bonus for capturing them so they can be crucified! 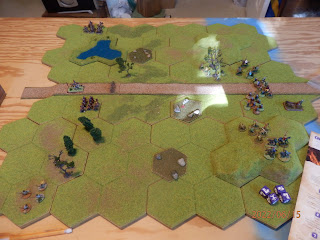 I keep it simple with Clash of Warlords scenario.  [ Basically engagement] Pattonus deploys cavalry and skirmishers to either flank with his legions in the middle. He hopes to use his light troops to keep the archers at bay while the legions do the heavy lifting. 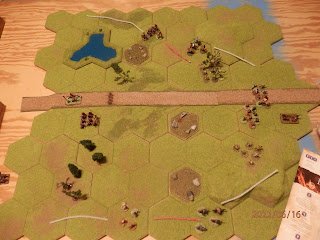 In this U-2 recon photo of the first turn you can see Pattonus' flanks move up and throw javelins while the Pict cavalry also moves up to block. 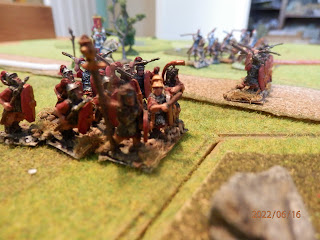 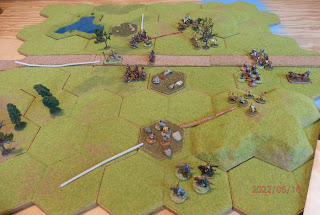 Turn 2.  The roman cavalry continue to harass while the numidians [ each figure counts as two. Haven't painted up 8 yet] move up to have a go at the archers.  They hit one which is significant as in V2 a unit of less than 6 levies doesn't generate a SAGA die. 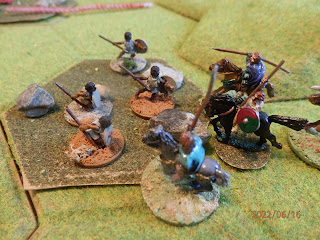 During the Picts half of the turn their cavalry charge the skirmishers.  They hurt them and push them back which was the goal.  Unfortunately they take one fatigue for the battle but another for horses ending in rough terrain.  This will come back to haunt them. 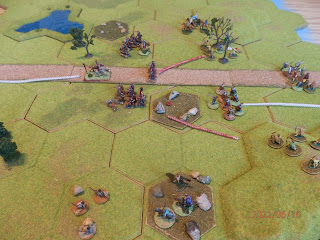 The rest of the Picts turn.  They pour arrows into the legions trying to reduce their strength.  The  Picts chieftain, wanting to get his monies worth, orders the deserters forward.

At this point the U-2 plane supplying our images ran into a storm so we will have to switch to radio descriptions momentarily.  We apologize for the inconvenience.

The legion on the road [ see above picture] deviates slightly and charges the archers in the wood.  They cause minimal casualties but take the wood and take no casualties themselves. Tankus, seeing the Pict cavalry dispersed on his right.  Orders the main legion to wheel right and charge.  They do so with devastating effect- wiping out the cavalry with minimal losses to themselves.

In the Picts half turn... 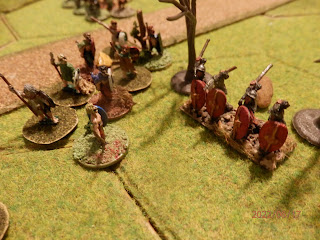 their infantry charge the legion in the wood with very good effect... 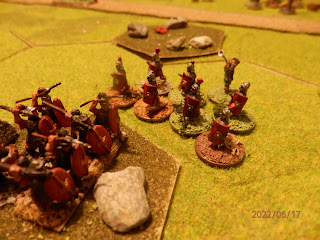 the deserters fall on the legions flank.  It is at this point the Picts find out that the best legionnaires are not the ones who desert.  The attack fails. 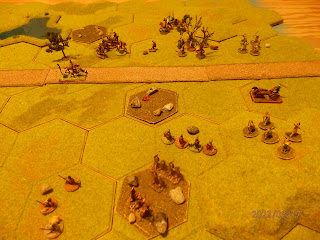 Images are now restored at the end of the Picts turn.  You can see the remnants of one legion in front of the wood above the road.  The deserters are in front of an angry legion below the road. 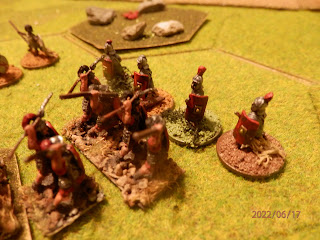 The main legion finishes off the deserters.  Pattonus pulls his forces from above the road to below. 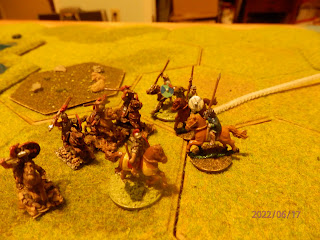 As the cavalry screens the withdrawal the Picts strike; they are rebuffed! 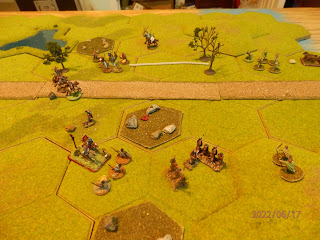 Situation towards the end.  The numidians have weakened the near archers.  The Roman and Pict cavalry have fought to a draw which is a win for the romans.  The Pict archers near the wood continue to fire at the legion while the Pict infantry moves out to take out either the roman cavalry or the weakened legion. 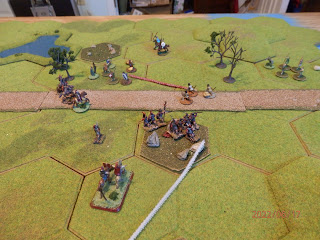 Pattonus sees his chance.  Ignoring the archers he moves up the skirmishers and legion for the kill... 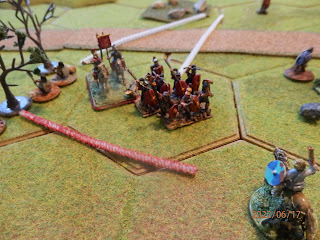 With the Pict infantry weakened with javelins from the skirmishers and cavalry he moves the skirmishers into the wood [ blocking the archers from this position] and joins the legion for the final charge... 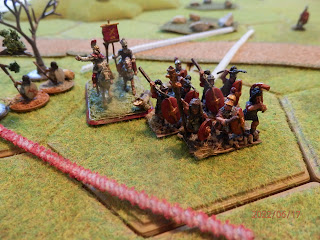 With three fourths of his cavalry gone, half of both his infantry and archers down the Picts fade away.

"This is a lesion I hope they learn well!" says Pattonus Tankus.

Great game that played fast.  SAGA always gives a great game.  In retrospect I shouldn't have split the Pict archers evenly as I lost dice too fast.  Either keep them together or an 8/4.

Posted by FlightDoc at 11:57 AM No comments: