Alpha boats for FoF and other pictures

Have played several games over the last 2 weeks including a great one taking place in Iraq that the US lost with only 2 turns left.  But this post is going to highlight my current fascination with riverine warfare in Vietnam.  A unique aspect of the war and one of the true successful innovations the French had.
Every year I blow $100 on frivolous stuff I really don't need but would be cool.  Now my wife would tell you all my wargaming stuff is frivolous but I am talking even frivolous for me.  Last year it was custom dice.  This year I bought an alpha boat from Battlefront (25% off) and a building complex from Crescent Root. ( love their buildings!)   The boat is frivolous because how often do you really need an alpha boat in a skirmish game?  The buildings are because... I have alot of buildings already. Good news is only spent $85.
So to my alpha boat.    It is big and looks cool!!! 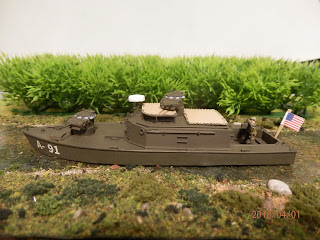 Here it is pimped out with a custom flag!

And because you all know I have my French Foreign Legion in Indochina we have... 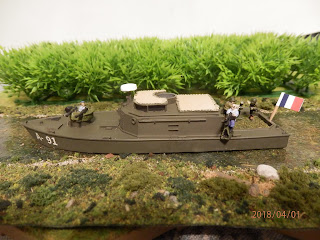 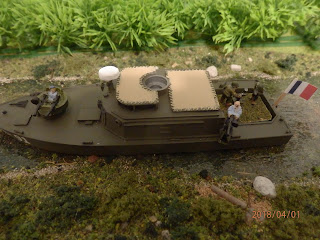 These were Harbor Defense Launches that the French added guns and armor too.  Many had 20 mm guns in front but mine has twin 50s from my Peter Pig PBR.  Needless to say Ambush Valley has no stats for this baby either so...
Vedette de Port   Class M    twin 50s 4/3 L   single HMG ( one per side) 3/0    60mm Mtr  3/0
armor 2D8 except rear 1D8   crew 7   Notes armor and weapons varied; more
added as war progressed
Other stuff to report: 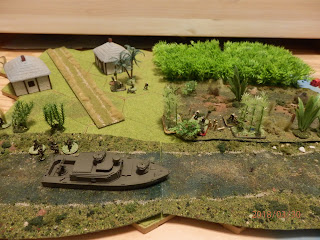 Quick game just to get my "river legs" with my half painted alpha boat ambushed.  5 Navy SEALS jump out. 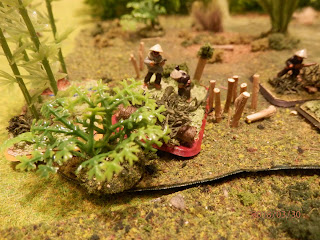 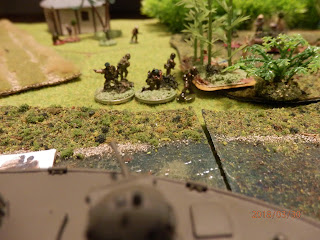 SEALS attempt to capture the rifle but it slips away. 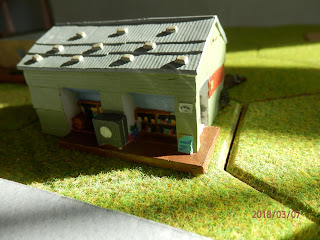 Finally painted up a Timecast building I bought last year at Historicon. 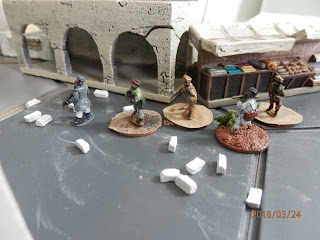 In the mean streets of Iraq... 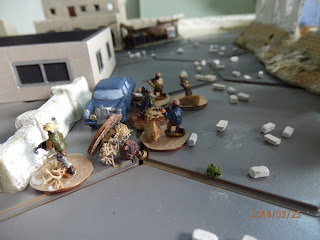 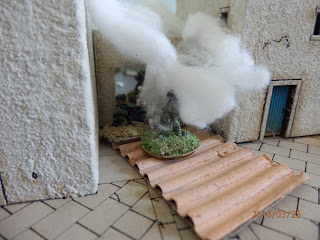 US forces moving under the cover of smoke 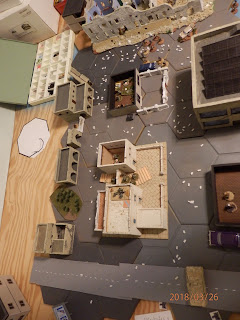 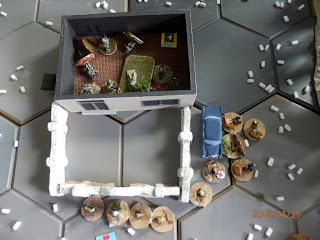 One fireteam pinned as the rebels get ready to storm the building!  SL down WIA. 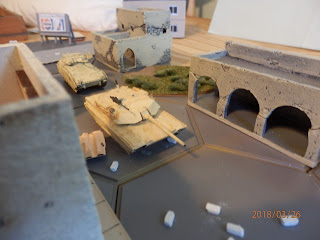 Armor shows up but will it get there in time?


It didn't.  The Rebels charged but were beaten back with final defensive fire.  US held on to their positions but lost on points as they had too many seriously wounded.   Great game.

That is all the news that is fit to print.  Happy Easter everyone.  Anyone with better info and ratings for the Alpha or Vedette de Port boats please let me know.

Johhny A in the FFL Chapter one

Finally decided to start a French Foreign Legion squad in Vietnam using Grunt's Forward and my rules for the Legion which will be in my African expansion.  There is a 10% chance of getting an American and I finally got one! ( Okay so 10% is high but hey it is my game and I am an American.  There is also a 10% chance of getting someone from the UK.)  Great back story as well so this guy can't die.  Gentlemen and Jack ( I doubt there are any ladies that read this, if there are please let me know and I will correct myself!) I introduce to you Johnny Anderson better known as "Johnny A".

Johnny A grew up as a golden boy high school athlete and class president of well to do parents in the mid west.  WW II broke out and in 1943 Johnny turned 18 and against his parents wishes "threw it all away" and enlisted in the marines to serve his country. His touch continued as he was quickly found to have true leadership talent and ended up a squad leader on Okinawa.  After the war he demobilized and went to college to prepare for law school to take over his dad's practice.  He was restless however, and Betty Lou helped quench that fire in him. After Betty informed him she was with child his dad told him the honorable thing to do was marry her and stop living a wild life.  Johnny didn't want to give up his wild life so spit for the east coast.  After bouncing around for 6 months he realized he knew how to soldier and went to France and joined the Legion armed with his High School French.  The Legion also noted his skill and he advanced rapidly to once again become a squad leader.   His brash cockyness did rub his fellow NCOs a bit, particularly the kraut Dietz ( swear I rolled him up too!) and the Lt Carville but the Company commander fancied himself a fluent english speaker and americanophile so liked this marine who had seen action in WW II while he himself had been in North Africa.

West of Hanoi in the Red River Delta 1951
Capt Doucet informed Johnny in English that a mentor of his had located to Annam and he wanted to take him to see the temple up river.  He wanted Johnny's squad to accompany them.  The boat would only hold a dozen people so he should pick 10 and meet him at the dock tomorrow at 7 am.  Now Johnny didn't like the Captain but he had treated Johnny well and the Captain was brilliant in a fight.  None better he had every seen; even in the Corps.  Besides, the Captain was the Captain...
Patrol scenario using Grunt Forward.
Sgt Johnny A         Gr II Leader
1st Squad  10 men including 1 BAR       8/10
ASL Cpl Hughes    Gr II Leader
Capt Doucet            Gr III leader with Brilliant characteristic
1 patrol boat with LMG up front. 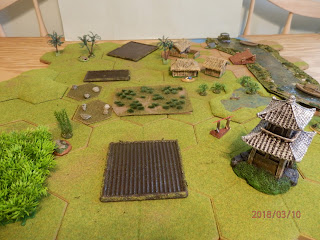 French will land at the dock upper right and proceed to temple on foot.  VC will be returning to village 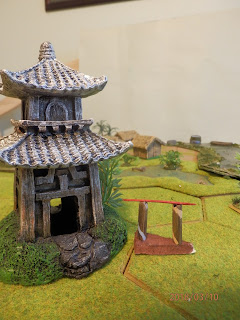 My cool $4 temple from Petsmart 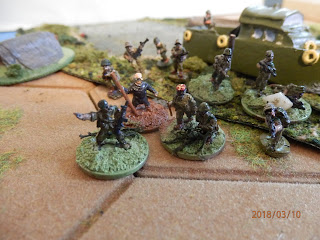 Johnny A, the Capt and Fr LaRouche, SJ. 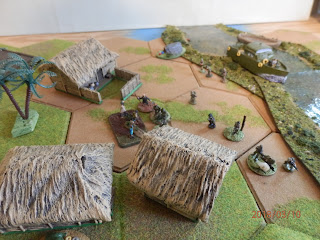 Fr LaRouche meets some villagers.  Yes he does speak the language but they tell him nothing. ( yes there is a table for that.) 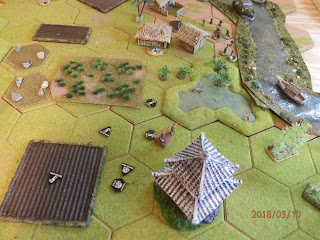 The enemy shows up on blinds and becomes... 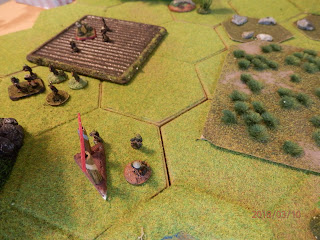 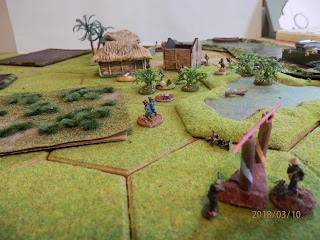 Cpl Hughes gets pinned down right away and civilians scramble for cover.
The VC use tunnels to move to the opposite side of the village leaving the LMG in the temple.  One of Hugh's men goes down with a serious wound.   Johnny patches him up and takes him back to the boat. 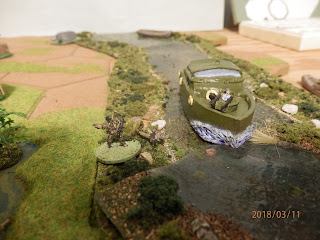 Johnny A making a drop off.

The boat moves up and eliminates the LMG. 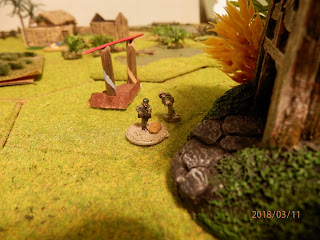 Johnny sends 2 men into the temple. He goes back for the rear guard and the Capt and priest start towards the temple again.  Battle over? 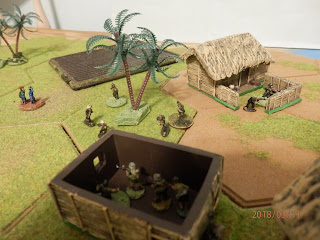 As Johnny picks up the rear guard to move they are attacked by the VC squad.  Disciplined firepower carries the firefight and after 2 KIAs charlie breaks off contact.

Short fun firefight!     Easy victory for Johnny A. One serious wound vrs 4 KIA for the VC. ( VM)  Post battle Johnny gets to talking with the priest who also speaks english and they strike up a friendship.  Also, Cpl Hugh's fireteam takes a liking to him with a +1.
More to come for sure! 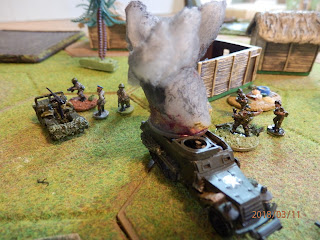