Been playing multiple games but none have been overwhelming. Still working on a scenario generator for SAGA.   I think 4 squads total is about all one person can handle in Combat Patrol which for the solo player means two squads a piece.  After that the game starts to slow down.
Pictures of recent battles: 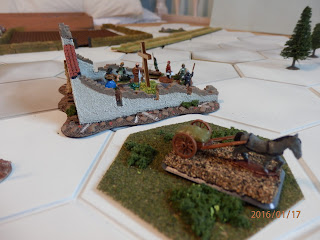 SAGA battle with workers building a church forced to defend it! 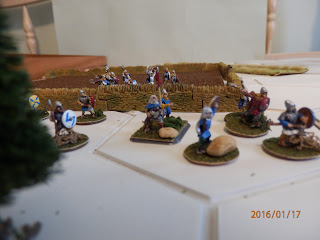 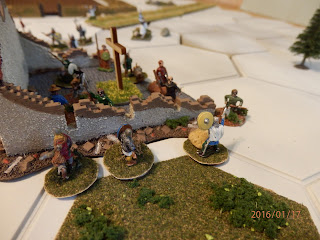 Final assault on the church.  Vikings lost.  It was fun! 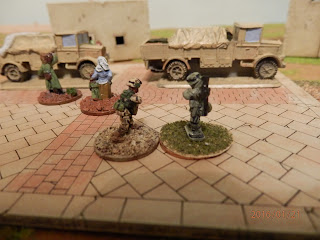 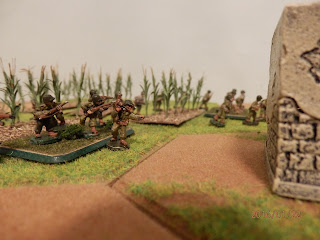 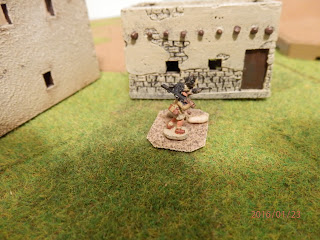 Tunisia; even here the Italians are retreating!

Now on to the sea.   Release the Hounds is done and I have moved on to Flotilla Forward.  These are the campaign rules for any small craft battles.

OLzS Schwartzmann looked at the stars; the clouds had been clearing which was a mixed blessing for his small force.  He could find convoys easier but the British escorts could see him more clearly!!

OLzS Schwartzmann   Flotilla leader.  ( These are the characteristics rolled up for your characters)   Ardent Nazi seeking wealth  Avg leader
LtzS Bareuther  Cultured man who believes in Germany's quest but not the Nazi party.  Natural born leader
LTzS Wehneit   Pessimistic about surviving the war in small boats.  Father was naval officer in WW I on a Cruiser.  Is reckless
LTzS Rudorffer  Naive but lusts for battle.  Father is a mid-level Nazi official so Schwartzmann likes Rudorffer and cuts him slack. 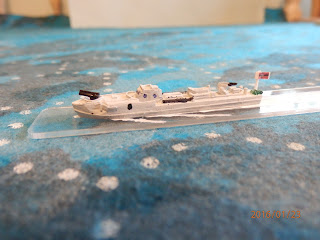 OLTzS Schwartzmann on patrol.
The lookout on Schwartzmann's boat called out a large ship dead ahead.  Schwartzmann took Bareuther towards the ship and sent the other two boats around in front to see if there was a convoy near. 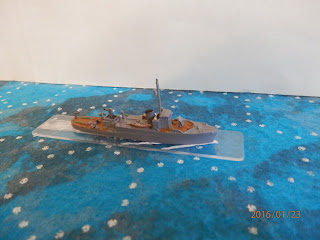 He identified the British ship as a minesweeper of the Algerine class right after it started firering.  He crew could do nothing but grin and bear it as he tried to closed the 3.5 miles toward the convoy.  ( He was saving his torpedoes and 20mm guns don't fire very far.)  Unfortunately several near misses from the 4 in gun caused moderate damage to his ship.  When a shell fragment went through his torpedo tubes he decided to quit while he was ahead.  He peeled of towards a squall and gave command to Bareuther.  He told Bareuther to fire his torpedoes and peel off as well. 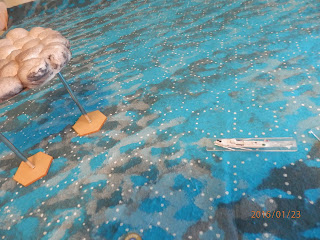 Schwartzmann seeks the shelter of the rain.


Rudorffer signalled a new ship was sighted but it was not a freighter.  It was a Hunt Class Destroyer. 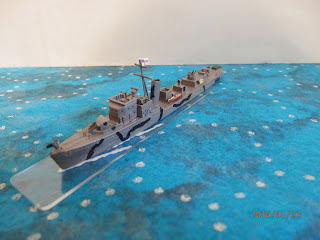 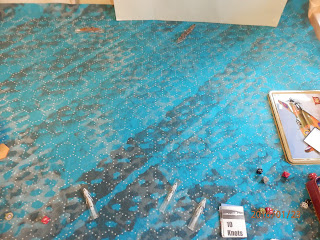 Situation when scale is reduced to each hex 100 yards.  Bareuther is lower left with Wehneit and Rudorffer to the right trying to get around the DE.

At this point there is an explosion at the right end of the E-boat line.  A (un)lucky direct hit from the Southdown sinks Rudorffer's ship. 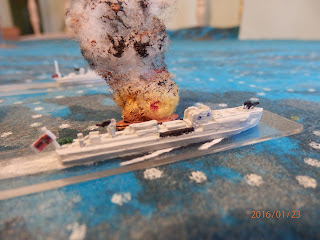 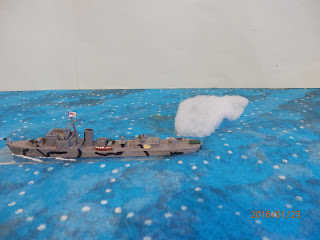 With half the ships gone Bareuther fires his torpedoes at the minesweeper (haven't yet seen a merchantman) and orders Wehneit to fire at the DE then peel away for home.

As Bareuther banks hard to port he and his crew are rewarded with a large explosion as the minesweeper is hit!! 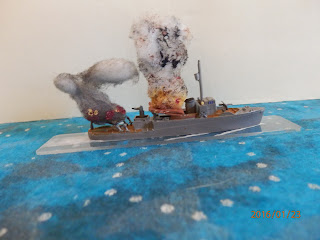 HMS Rifleman badly hit but will actually survive the night to be towed back to port. 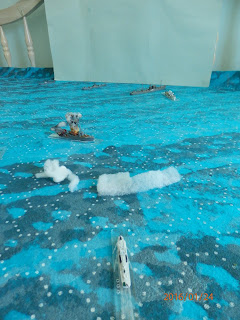 What is this?  LTzS is continuing on hoping to find the merchants. 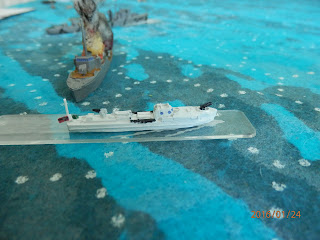 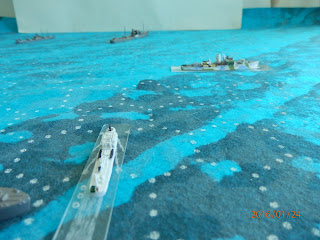 At last; he sees a merchantman.  Now his fish won't be wasted.  He fires and then turns hard to port.  Unfortunately for him, no explosion is heard or seen-- he missed.

Schwartzmann and Bareuther are furious with Wehneit.  Needless to say Wehneit's crew is not fond of him either.  He is given a formal drewwing down by Fregat Kaptain Froshler the CO. Rudorffer is not found.
Froshler is not happy with Schwartzmann as he can't lead his officers, lost a Nazi officer and failed to hit a merchantman.  He blocks the flotilla getting a replacement boat and crew. 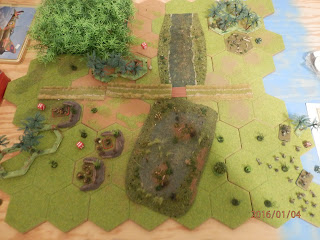 Turtle Creek    The US had two stonks of 81mms which they dropped into the jungle.
Lt Braxton's plan was to have his best squad (1st) cross over the footbridge; his worst squad (2nd) provide covering fire from the top right and his last squad advance to the swamp and either provide fire or advance. 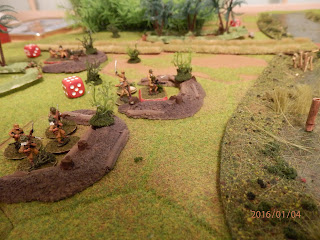 Close up of Jap positions 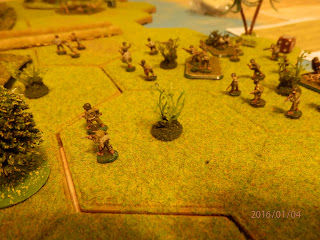 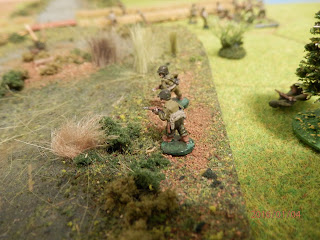 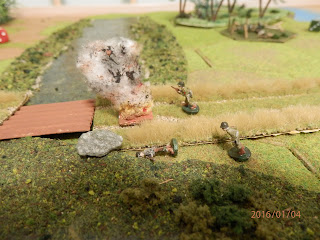 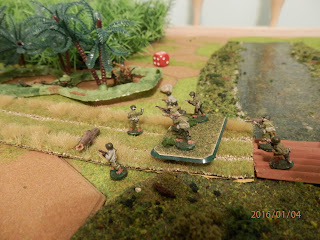 With Big Joe pinning the Japs in the jungle Smokes gets his squad across intact.  ( One Japanese LMG broke which helped!) 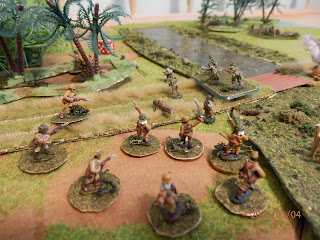 The Japanese Lt, seeing the danger leads his forces out to throw Smokes back!  The fighting is brutal but Smokes squad yields under the pressure.  ( I gave the Japanese +1 in melee.  +2 if you are carrying a sword!)

Seeing Smokes get across.  Lt Braxton directs 3rd squad to follow up their success. 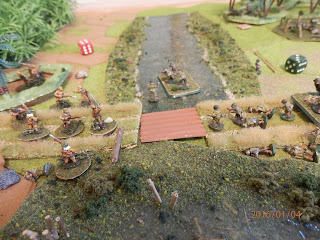 Sgt Trimble meets the Japanese force and the hand grenades fly! The Japanese are cut down. 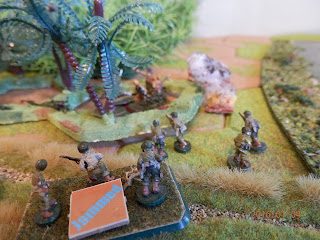 Flushed with success, Trimble takes on the half squad that is left in the jungle despite the BAR being jammed.  The Japanese retreat through the jungle.  The exhausted americans do not pursue.

Fun first battle.  Lt Braxton is pleased with the platoon.  He thinks briefly about putting Trimble in for a medal but there is probably not enough there and his CO Capt Grimes, will be cautious because he wants to become Maj Grimes ASAP.  That said, Capt Grimes must be impressed with the platoon because an unarmed man shows up at the platoon and introduces himself as "Black ink" Webb.  He has been given permission to write about the platoon! Just what Braxton needs!!! 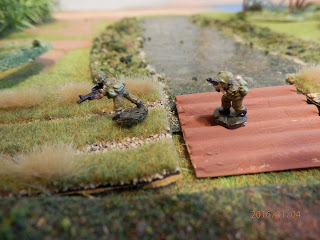 Just for fun used the same board to have a squad of US infantry patrol against a squad of VC.  Worked well.