Happy Halloween!  October was a busy non gaming month.  I did play a WW III battle after reading one of my old General magazines about MBT. 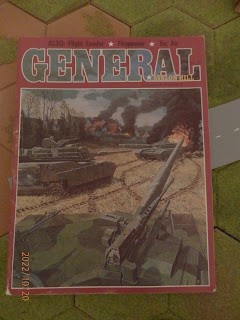 That cover is still the best box cover I have ever seen on a game.

The replay in the mag was a meeting engagement between a tank heavy german company and a large russian guards company.  It was an umpired game so neither player knew where the other's forces were or what their objective was.  Now Platoon Forward does a pretty good job at hiding your opponent's forces but I have never tackled their intentions.  That was today's challenge; a prototype system where I didn't know exactly what the Russians were up to!

I went with 6mm forces that I bought from Jack.  I use 1 to 1 ground scale for my skirmish games so 6mm is closer to 1 to 1 for my battalion games but I do like the detail of the infantry and houses for 15mm.  I really haven't made up my mind as to which scale I should use going forward.

Hauptman Borsch walked back to his tank.  He had been told the situation was "fluid" but the russians were advancing.  He was to take his company and occupy the town of Hauptstuhle and hold it.

His Forces   [ All Veteran] 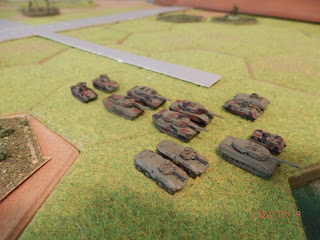 German forces.  Each vehicle represents 2 except the command element.  Each hex 100 yards. Each turn about 10 minutes.    I am using Battlefront rules except for initiative, orders and activation which is O group.  As this is only a company the Germans start with 7 command dice.  I did away with preparatory rolling and had the forces enter per my "meeting engagement" scenario "R" found in one of the Too Fat Lardie Specials. [ If you want a blast from the past my first posted meeting engagement was posted Sept 2013.  I was using TW&T which is still a great game.] 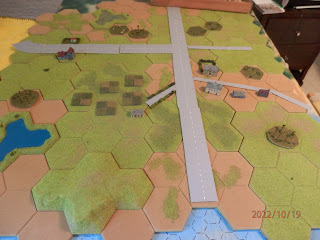 The battlefield looking east.  Hauptstuhle sits right center near a major intersection.  Borsch decides to have 1 tank platoon and his panzer grenadiers advance into the town center.  His Jaguars will move to the hill on the left with his XO.  He will place himself with the second tank platoon in reserve.  They have access to mortars but the mortars are often busy. The armored cars will first scout the town and then push down both major roads.    Let's hope it works! 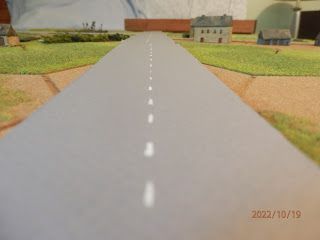 Its a long, long rooooad... 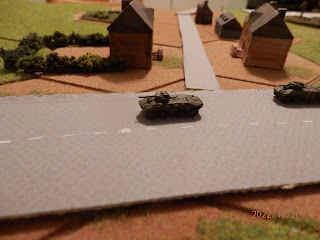 Borsch is lucky.  They get a 20 minute jump on Ivan.  His scouts report no enemy seen in the town! 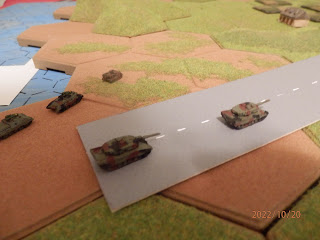 1st Panzer and the Jaguars move out!  Maybe the Russians have stopped for supplies? 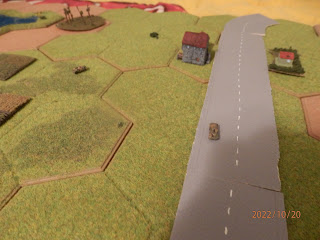 As the recon vehicles near the crossroads they report 2 Russian BMRDS approaching from the north.  Borsch says, "Confirm direction of traffic; north not east?"  Affirmative is the answer.  [ My first surprise of the day. But will this now become the main access of their attack or is this just a platoon with a whole battalion waiting in the east?] 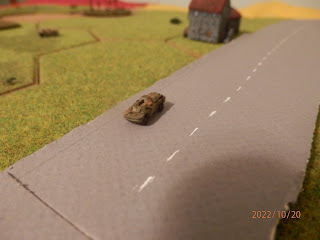 What are these guys thinking?  Either way they need to stop. 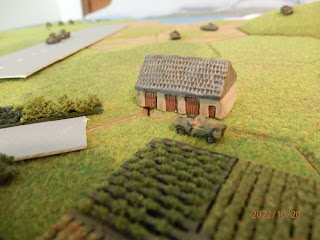 The Luchs drive off the russian on the road but the cross country guy is fast.  He makes it into the rural part of Hauptstuhle.  Great, now he can see our panzer grenadiers and jaguars!  So much for German deception. 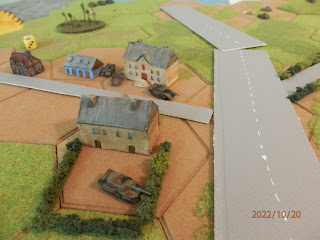 Hauptman Borsch isn't prepared to change his plan just yet.  1st platoon does swing their tanks towards the north and he decides not to debuss the infantry yet. 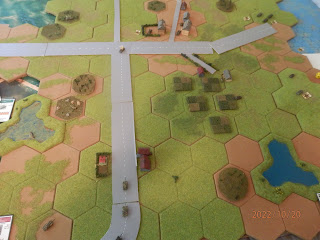 The battlefield about 20 minutes after first contact.  1st Platoon and 3rd platoon in Hauptstuhl proper.  Jaguars deployed on hill and in front.  2nd platoon and CC in reserve upper right.  Remaining AC looking down the road towards the east.  A company of T-72s enters from the north.  [ Each tank is 3 vehicles.] 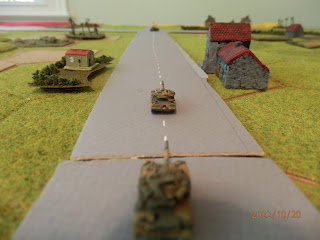 This looks like the main axis of attack to me.  What do you think? 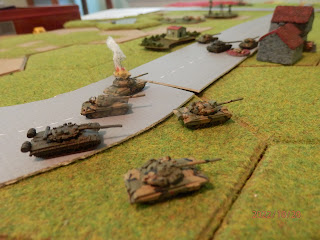 The Jaguars score hits and the Leopards start to engage the first company. Borsch follows the battle over the company net.  A second tank company emerges.  Okay, I think I know where they are coming from now! 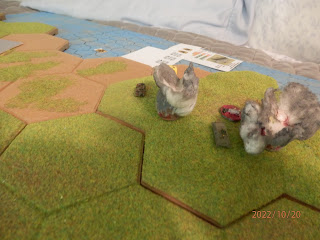 Suddenly the hill erupts in flame as shells rain down. [ 33% chance that.]  1 Jag is KOed and the other beats a hasty retreat.  The XO is actually OK. 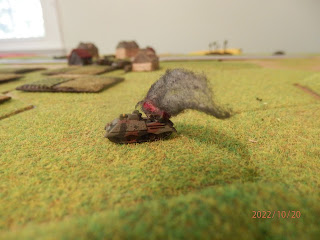 When it rains it pours.  The other 2 jags are destroyed by the mass of T-72s.  Now there are no german forces north of Hauptstuhl. 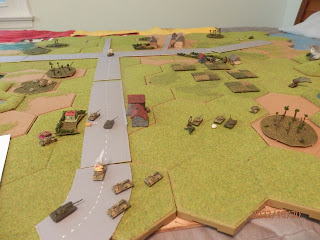 Hauptman Borsch moves his 2nd tank platoon into the eastern half of the town just as BMPs appear. [ 2nd surprise of the day.  Man the russians have a lot of stuff!]   There is still a 20% chance of additional reinforcements but they will be minimal unless it is the Mig 23s I painted up.With 3 companies on the board the russians now have 8 command dice and play normally. [ The russians can use 2 commands to have an entire company do the exact same thing.]  I now need to dice for their objective since they are starting to advance. [ 3rd surprise of the day.] 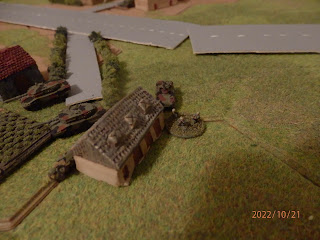 With BMPs on the horizon Capt Borsch ask 3rd platoon to send a small force to the east to protect the tanks.  He still plans to do the main fighting for the town in the town center. 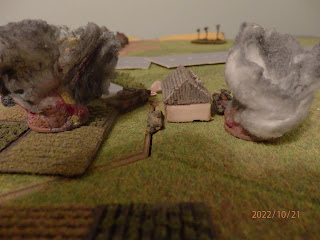 the infantry are greeted with a barrage of artillery.  Mercifully few casualties. 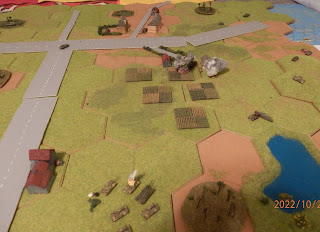 A look at the battlefield a good hour after contact.  The first russian tank company has retreated.  The second is in disarray but 1 platoon has managed to reach the hill.  The BMPs are ready to rumble. 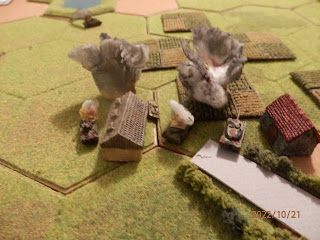 Artillery continues to pound Hauptstuhl destroying the Marder.  T-72s get lucky and take out 2 leopards. Borsch has no reserves.  He sends messages for troops in the eastern section of town to withdraw to the center.  That is where we will defend the town. 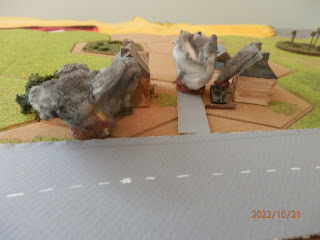 After he sends those orders artillery shifts to the town center and the T-72 platoon on the hill takes out 2 leopards in town with a side shot.  Rats. 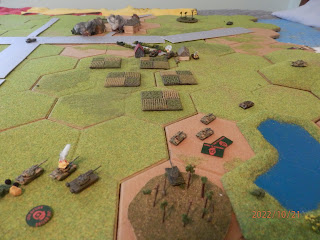 The BMPs continue their advance but they aren't headed for town.  they are headed for the hill.  Where is our artillery?  Our Air Force? 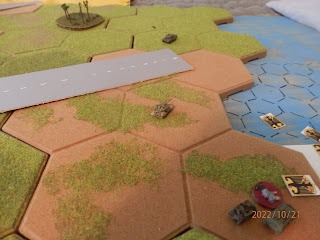 The T-72 platoon on the hill, after toasting 2 Leopards, now starts to head for the main road!  His platoon starts to engage Borsch's tank.  [ my lone jaguar never did recover.  It is trembling over in that corner.]  Borsch fires back and quickly moves towards the woods. 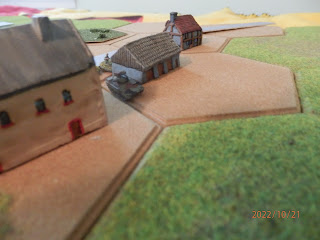 But help is on it's way for our Captain... 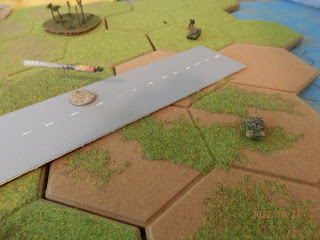 Borsch's tank takes damage [disrupted] so the company temporarily has no command.  It does have several milan missles moving towards the T-72s but they all miss!  The Marders are quickly dispatched by this miracle T-72 platoon. 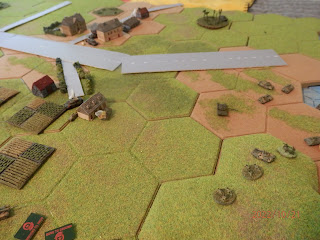 The Russians leave 1 infantry platoon on the hill to overlook the town as the rest of their vehicles stream towards the road heading west.  The germans have lost all their leopards and have 2 squads of infantry left in the town.  Borsch, in his damaged tank, tells the panzer grenadiers and his lone Luchs to head south where they will try to circle up with german forces.  He takes some solice that they were greatly outnumbered.

Great game that contained several surprised which is always nice.  I think I would have set up differently had I know the russians where just passing through.  The infantry would have been placed to the east or on the hill for example.  My system worked but it was very situation depended.  Will need to generalize it more.  Still a meeting scenario is probably the most complex scenario to tackle.  Attack and defensive postures should be easier.

For those of you interested the butcher's bill was:

Not a great kill ratio for the leopards.

Posted by FlightDoc at 10:41 AM No comments: