Donnybrook?!    He hasn't played that in years.   What happened?  I will tell you friends 2 seemingly unrelated events have happened.  First, I have finally gotten around to reading Chernow's biography of Alexander Hamilton.  It is a great book so far.  Hamilton was very active in the battle of New York as an Artillery Captain. Second, Scale Creep is having a sale on rule books so I bought Dead Man's Hand for almost 50% off.   That got me thinking of all the rule sets I have bought over the years.  A few not very good [Black Seas], several okay [Piquet], several good that got replaced with better, [KMH, BTH, COC, TWAT and Patrol] and a few that are good I just don't play the period very often [ Post Captain, SAGA and Donnybrook.]  So I pulled out Donnybrook while I am waiting to see if Dead Man's Hand will be any good and presto!  We are here.

If you go to Feb 2014 you will see 2 reviews of Donnybrook.  I have thought it was a very good set of rules except for 2 things, morale and combat in the open seemed too deadly.   I think you know I am a huge fan of the mechanics of Force on Force. [ Jack I know you aren't;  There is still time to evolve!] There are a lot of similarities between the 2 games.  Both have static target numbers and the type of die changes with the quality of the troops, both are quick play and both are fun.  The morale rules from FOF should work well with Donnybrook and solve one problem. Each time a unit takes a casualty roll a morale check for the unit as follows.  Roll I quality die for each figure in the group need a 4+ to pass.  Count up the passes.  You need more passes than fails to pass the check.  Musicians add 2 d12s. I thought of using the initiative rules from FOF but you lose the elegance of the reload cards.  How to solve the deadly shooting?    Instead of a save how about a wound check similar to characters?  At the end of the turn [or units turn] roll a d6.  On a result of 5,6 it is a light wound.  2 Lt wounds and a figure is out.  The figure is still down for the morale check however.   Right, lets try this out.

Lt Hinton is tasked with taking a small detachment of troops  and breaking up a drill of militia practicing at Tinytown.  He was to  avoid bloodshed is possible.  He felt this would be a good chance to hear his new piper!

1 unit of drilled highlanders (8) plus 1 bagpiper

Rebels or freedom fighters depending on your view 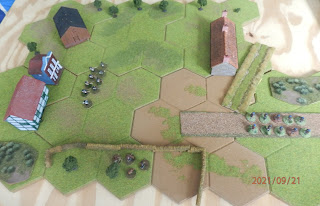 The common of Tinytown.  Lt Anderson's force completing their drill left.  Minitemen behind wall and Lt Hinton marching up the road to restore peace. 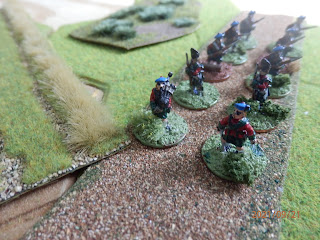 Lt Hinton and his men.  I painted this piper several years ago.  He finally made it onto a board! 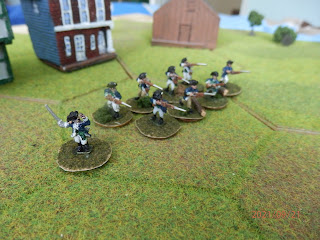 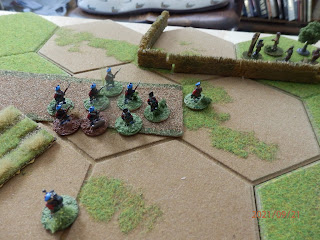 Lt Hinton starts to parlay while his force forms a line to add weight to his words.  The minitemen's card did not come up at this time.  They were able to hold fire till after the parley. In spite of what my friends across the pond think we are not savages! 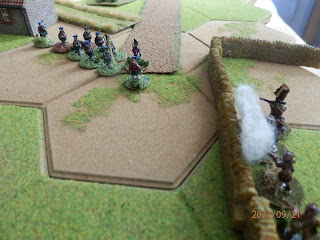 Line formed parley over!  "All these Brits do is talk." 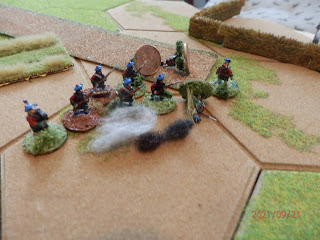 Lt Hinton is appalled.  He was just getting to the punch line too.  With 3 down the piper starts to play.  The Scott's morale holds.  Hinton decides best to break the rabble in the square first then deal with the cowards behind the wall.  Fire! 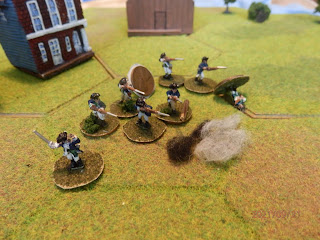 As he sees the Scottish line fire Anderson orders his own line to fire.  He sees 2 of his own men fall.  He really doesn't want to go toe to toe with the Scotts for long... 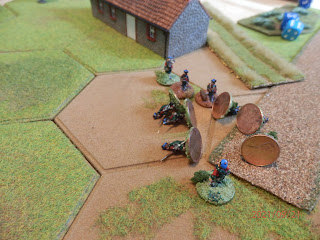 The rebel fire sends 3 more men down. [ told you fire in the open is too deadly!] Miraculously morale holds.  Hinton is glad we are trying out this light wounds rule.  "Two of these lads should be still fit to fight at the end of this turn." 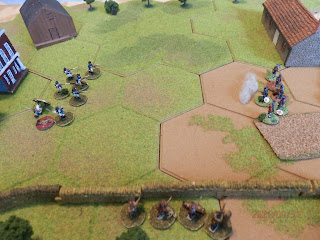 Beginning of turn 2.  The Scotts fire straight away causing only 1 casualty but the Rebels morale is starting to waiver. 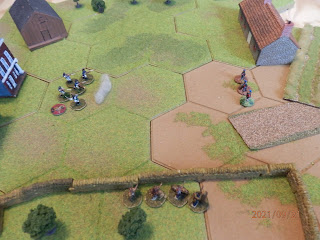 The Militia fire back! 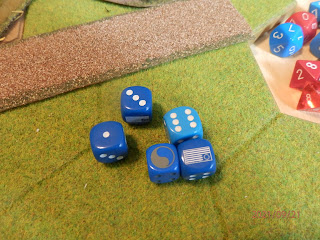 I know Mr Hilton and the people from Donnybrook say I can't roll that many 6s but here you go; three hits!  [ No the "1" did not cause damage.  I checked though I don't use that rule in 1776.] 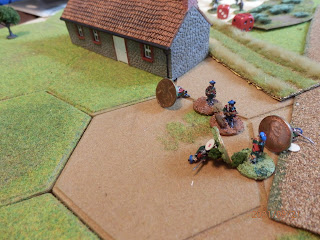 On No, not the bagpiper!  We really have to quit standing in the open.  Amazingly the Scotts hang tough.   Lt Hinton picks up a musket.   "Just a little more pressure lads and they will be running for the hills." 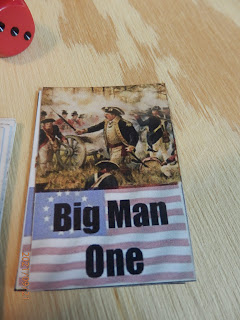 Lt Anderson's card comes up.   Decision time!  Does he reload his troops or rally them?   Beside the stories this is what I like about skirmish gaming.   He decides to rally.  If he can rally he can charge the Scotts and drive them from Tinytown. 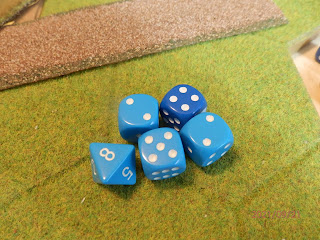 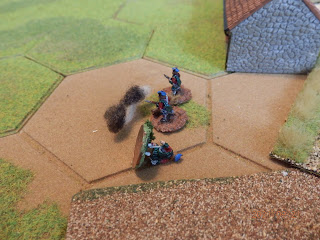 Just then a shot rings out from the poucher [sharpshooter].  Lt Hinton goes down in a heap.  The two remaining Scotts finally break and drag their officer around the corner of the stone building.  As they ponder their situation they hear a voice, " Lads you are getting my kilt dirty." 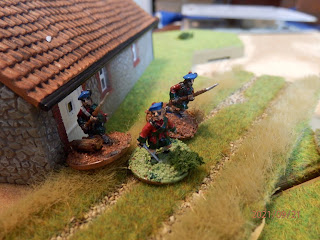 Lt Hinton was just grazed!@  [ Passed his wound check per normal rules.]  With just 2 effectives and cheers coming from the common the Lt faces the truth and heads back down the path away from Tinytown.

Great game that played in 30 minutes.  Helped me knock the dust off the rules.  I really like the morale rules I inserted.  That really was the intent for the Scotts and the only way they could have won. I also like my wound solution to combat.   Will need several more playtests to see it that works.  Glad I played Donnybrook and hope to get some more games on the table.