Sometimes the cards are stacked against you--- Santa Barbara

Sorry for the quiet spell on the blog.  Have been in the states working on further studies for a couple of weeks.   In the off time was working on Jasta Forward.  This will be the WW I version of Squadron Forward.  Sections I and III will be quite similar.  Section II, the scenarios, will be different and off course all the appendi (?) will be all changed to reflect WW I aircraft.

Back here last weekend am experimenting with Lazy TW&T.  Am melding it with SAGA.  We will see where it goes.  The best news of course is no matter what the tactical rules it still goes with Platoon Forward.  My brother gave me a beautiful Italian church for my birthday so I turned to my british platoon in Italy for this game.  This is a great platoon and is a poster child for PF.  It has loads of characters and no one gets along!

Is this a soap opera or what?

Red smiled.  "Balls" had finally given the platoon a hard assignment.  He was to lead the main attack against the church of Santa Barbara.  (Red had always felt that Balls felt he wasn't a true leader.)  He had that coward McGregore but also artillery and a tank.  He felt confident his men could take the church. 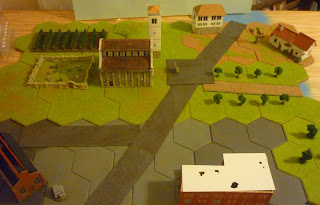 The Church looking from British lines.
His plan was to put McGregore in the building on the right and have him interdict the battlefield.  He would lay one stonk on the tower, one on the graveyard and one of smoke infront of the church.  Cpl Clarksone would charge the church directly while his best men (Barnes) would go into the graveyard and assault the church from the side.   He would stay in the left building with the drunk McNabb and follow up the assault to hold off any counter attack. 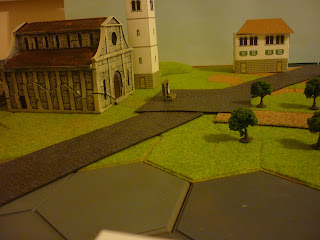 Another view of the church with St Barbara in front 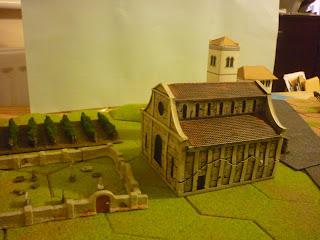 The back of the Church.
(What a great model!) 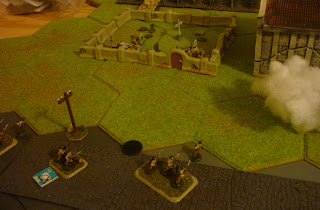 The attack begins!!!
Cpl Clarksone leads the way
Now in Platoon Forward I wrote that the system will give you a great game 90% of the time.  Well, sometimes the cards are stacked against you.  (Sometimes you get a walk over too.)  First, we were facing paratroopers as you can see in the picture above in the graveyard.    Second; all the german forces were stacked on the graveyard side of the table!!   There was one half squad on the other side.  If I didn't know better I would have accused the game of leaking my plans to it.  (Who wrote these dumb rules anyway!)  Third; the germans rolled better than average for support weapons getting two HMGs, one in the tower and one on the hill behind the church.  There was even a tank behind the graveyard!
Suffice to say the attack met "stiff resistance". 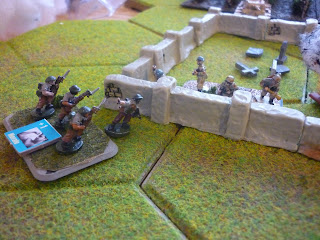 Sgt Barnes makes it to the graveyard!
Cpl Clarksone managed to make it into the church but upon losing his life, his men thought better of it and left to crouch behind the graveyard wall.   Cpl McNabb moved his men up to support and was caught in a withering crossfire and lost half his section.  At this point Red had seen enough and ordered a withdraw.
Red tried to explain to "Balls" what happened but fell on deaf ears.   Morale dropped in third section due to McNabb's antics so Red felt he had to go and ask for McNabb to be replaced.  (unlikely)  Bad idea.   Not only did Red get a lecture on the evils of blaming ones failures on others (-1 towards Ball's view towards the platoon), McNabb and McCarthy are both mad at Red (-1 as well), Cpl McNabb stays, morale still drops by one in 3rd section and now Sgt Maj McCarthy is going to go out with the platoon next mission to check on Red's leadership.  Whew!  Just another day in Platoon Forward!
Great game and the system sure surprised me this time.   I would have shifted my forces but the ground was just too open.
For those of you that want to do better than Red the Germans had
2 squads both +1 morale  (remember 2 LMGs per squad)   1 Gr IV 1 Gr III and 1 Gr II
2  HMGs and    1 PZ III tank.    The germans start dug in.
Enjoy
Joe﻿
﻿
﻿
Posted by FlightDoc at 2:19 PM 1 comment:

A miniatures gamer looks at Fields of Fire

My brother gave me an old GMT solitaire game "Fields of Fire" for Christmas.  I finally got to play it twice and thought I would share my opinions.  Up front it would appear to be a good move; I started out in board games (though I haven't played one since 2007), love solitaire systems and love command and control.  This game has a reputation for emphasis on command and control while having a horrible rule book and being very complicated.

In the game you take an infantry company through 7 missions in either WW II, Korea or Vietnam.  You gain experience as you go.  Terrain is abstracted and drawn from a terrain deck.  Units are squads, MG teams and HQs.  Each step is 2-3 men.  Time is abstracted as well but ranges from 10-30 minutes.  As a miniatures gamer I made a couple of modifications... 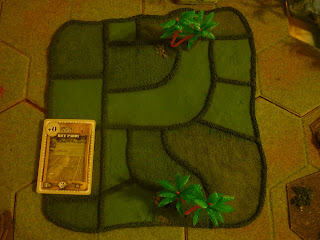 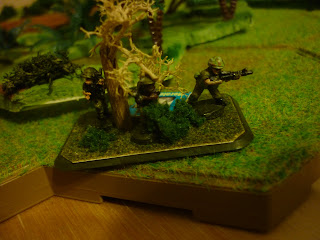 A squad counter becomes...﻿
You get the idea.
You activate your Company HQ with a certain # of points and then spend those points to activate platoon HQs who in turn active squads to move, rally, concentrate fire ect.   There is a fair amount of minutiae regarding communications with radio nets, flares and having to order troops to do everything but fire.
Combat is complicated because it uses an unfamilar mechanism.  Primary Direction of Fire and the modifer for combat is the best weapon firering at the card regardless  of how many weapons are firering.   The rationale here is that the modern battlefield is "empty" so most fire is wasted.   Combat results roll morale and death into one with squads breaking down into fire teams, litter teams and taking casulties.
The solitaire enemy is activated by entering cards and rolling to see what is on there.  The difference here is once you discover the enemy you roll again to see where it is placed.  It normally will be placed on another card firering at you.
The whole system is diceless and uses a deck  of cards for activation.
How does it work? 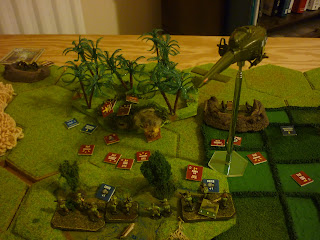 2nd Platoon closes in on a bunker complex
with artillary and helicopter support! 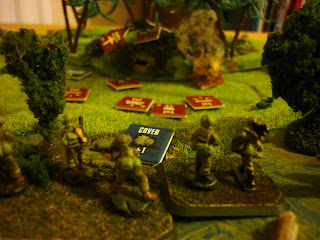 It works well.   The rulebook is confusing (including the second edition I downloaded) but the examples of play on the GMT website help a lot.   If you think about what is actually happening on the board it it not that complicated and after about 5 turns the game flowed.  [ I was even able to remove about 25% of the markers.]  The command mechanism works well and shows you the decisions real commanders have to make.  The combat mechanism took me a while to get use to but actually works.  The solitaire enemy works well once they appear.   The way they appeared on the board still seemed a little random to me but it did produce an enjoyable game both times.
I like this game a lot.  A couple house rules I will add in are:
HQ units will have a higher chance to rally than squads.  (they are the leaders right!)
Cooler random events stolen from Platoon Forward
I will add something for weight of numbers.   3 squads firering have got to be better than 1.
Close combat could be better represented.
Best parts of this game are:
Command and control mechansim really gets it
Snipers are killer to get rid of
Enemy AI once they are on the board is good
You can use Platoon Forward with this game
All in all a very good game.  Easily converted to miniatures as you can see above and worth a look for the solitaire gamer.
Thanks bro for the present! 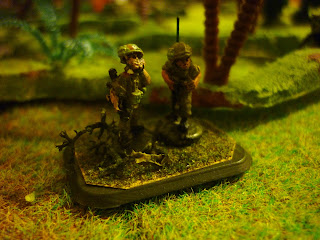