Sorry for the long break in posts but the weather has been so good in England that we haven't spent much time at home on the weekends.  Weekdays are busy with work, daughter's sports and painting up americans for my AWI battles I have yet to fight.  Have played several BTH games and this game of DonnyPractice.  It takes its inspiration from a Dave O Brien scenario about rescuing prisoners from a slave market in Tangiers.  I don't have those kind of figures so I made due.

"Prescot!   We have recieved word that the notorious, pirate HR Block, is meeting with Abdulla Jack 5 kilometers south of town tomorrow.  HR is going to sell some prisoners he has reciently captured.  Take a platoon down there and break up the party and free those prisoners.  Better yet capture HR in the process.  If you want a promotion capture HR and Abdulla Jack!   Ensign Selfridge will be joining you with some marines.   Good Luck old boy." 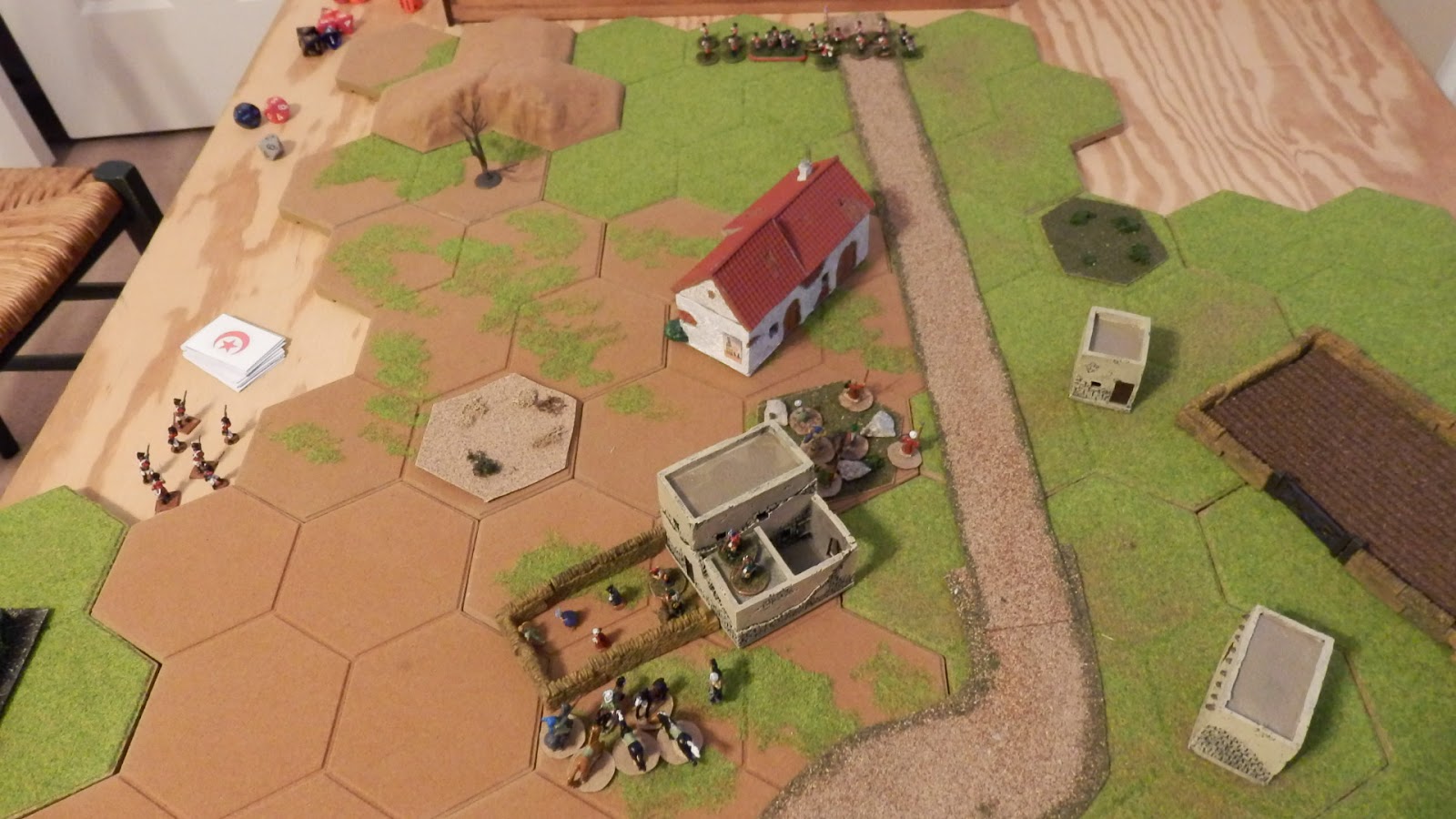 LT Prescot enters from the top of the board.   Prisoners held in the center courtyard while HR and Jack discuss bussiness. 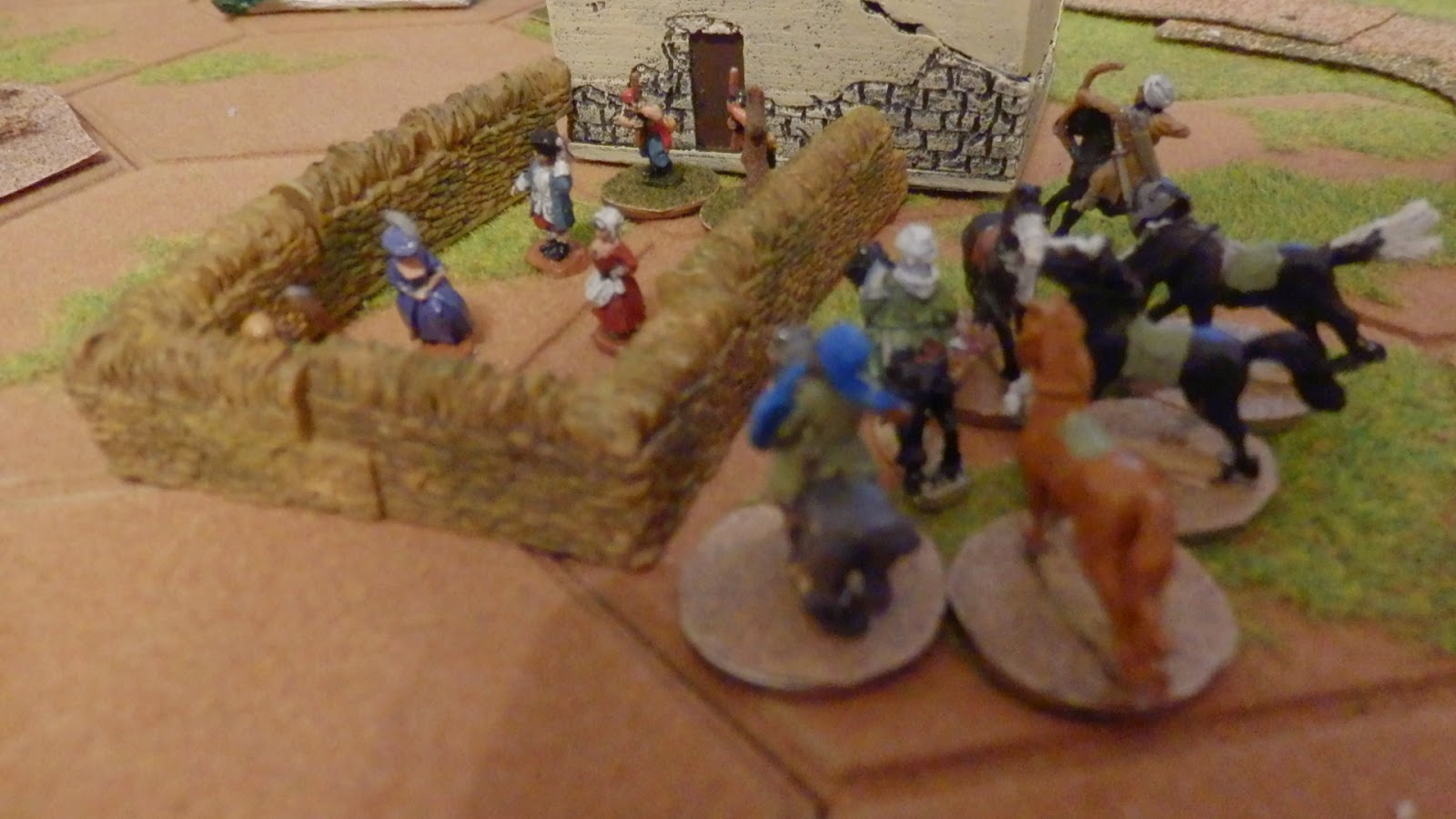 The prisoners await their fate! 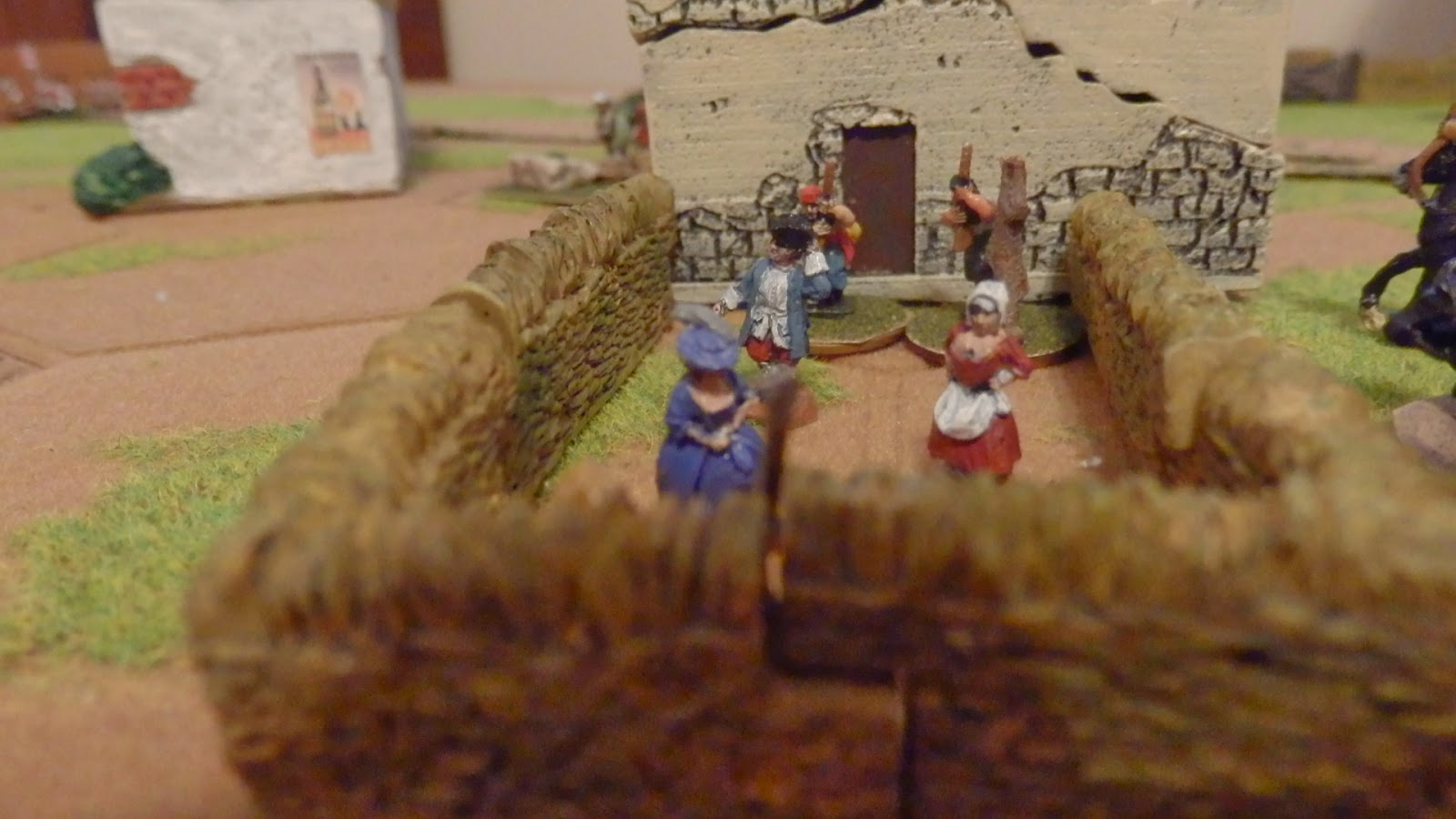 Lt Prescot's men moved down towards the building and split into two groups in order to keep the pirates from running off with the captives.   Lt Prescot kept to the road and Cpl Tennison moved toward the courtyard.   Lookouts spotted the redcoats and sounded the alarm.  Arab calvalry moved to charge up the road while pirates manned the courtyard. 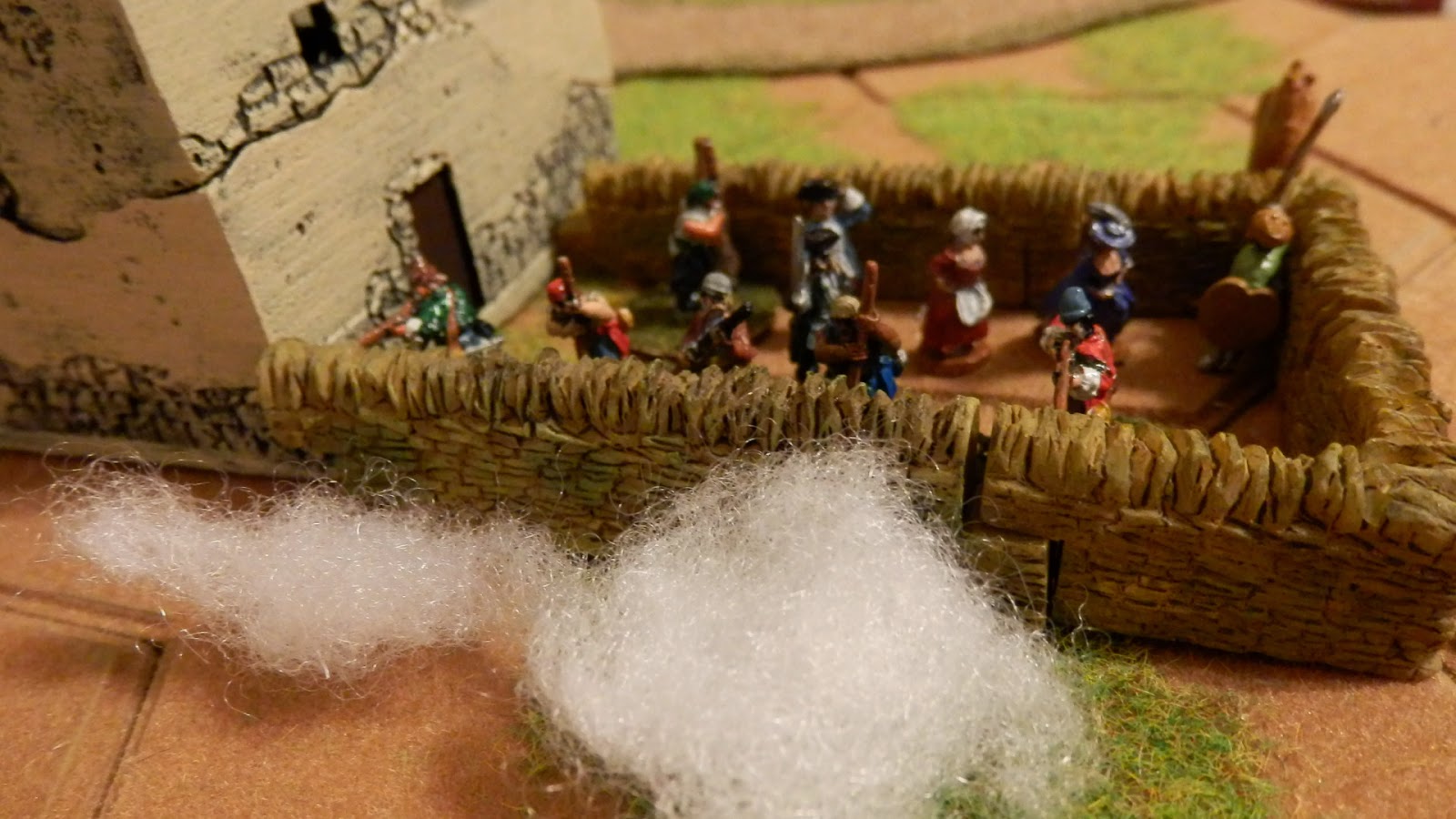 Pirates start to fire at teh advancing british.  One Arab and one pirate guard the prisoners. 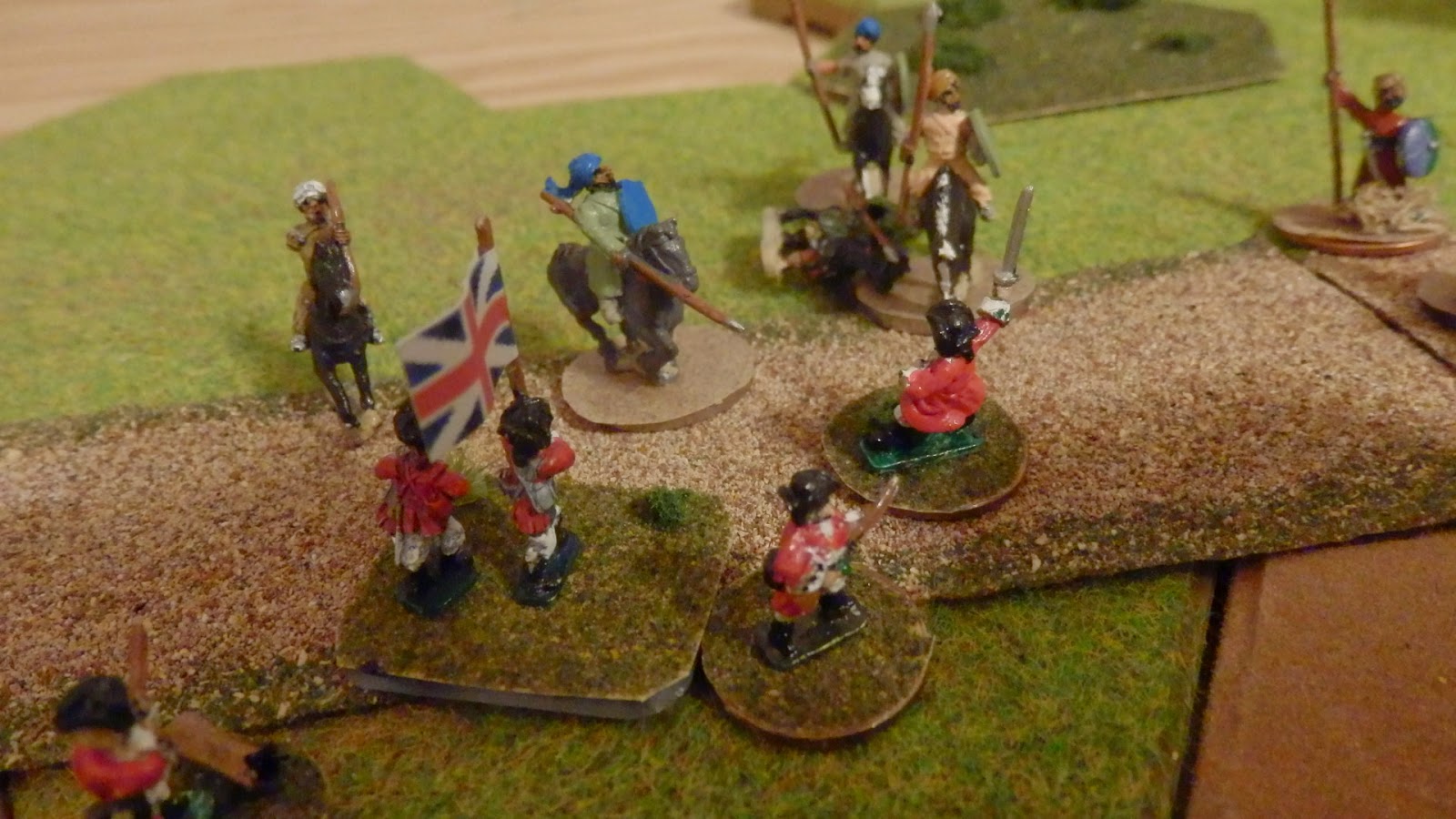 Meanwhile the calvalry take a toll on the british, severly wounding the Lt. 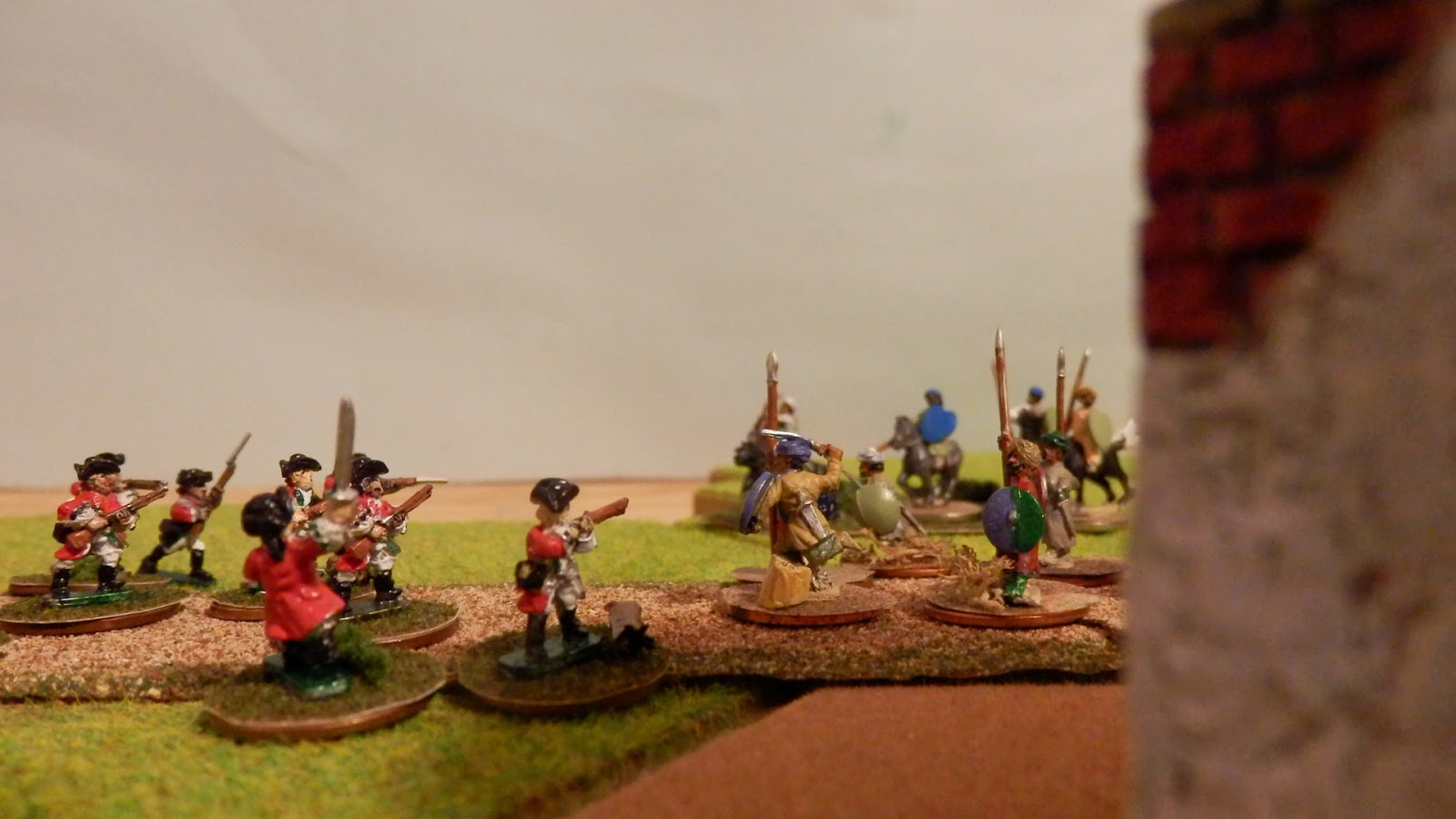 This is immediatly followed up by an infantry charge.
It is too much for the half platoon.   They retreat towards Cpl Tennison. 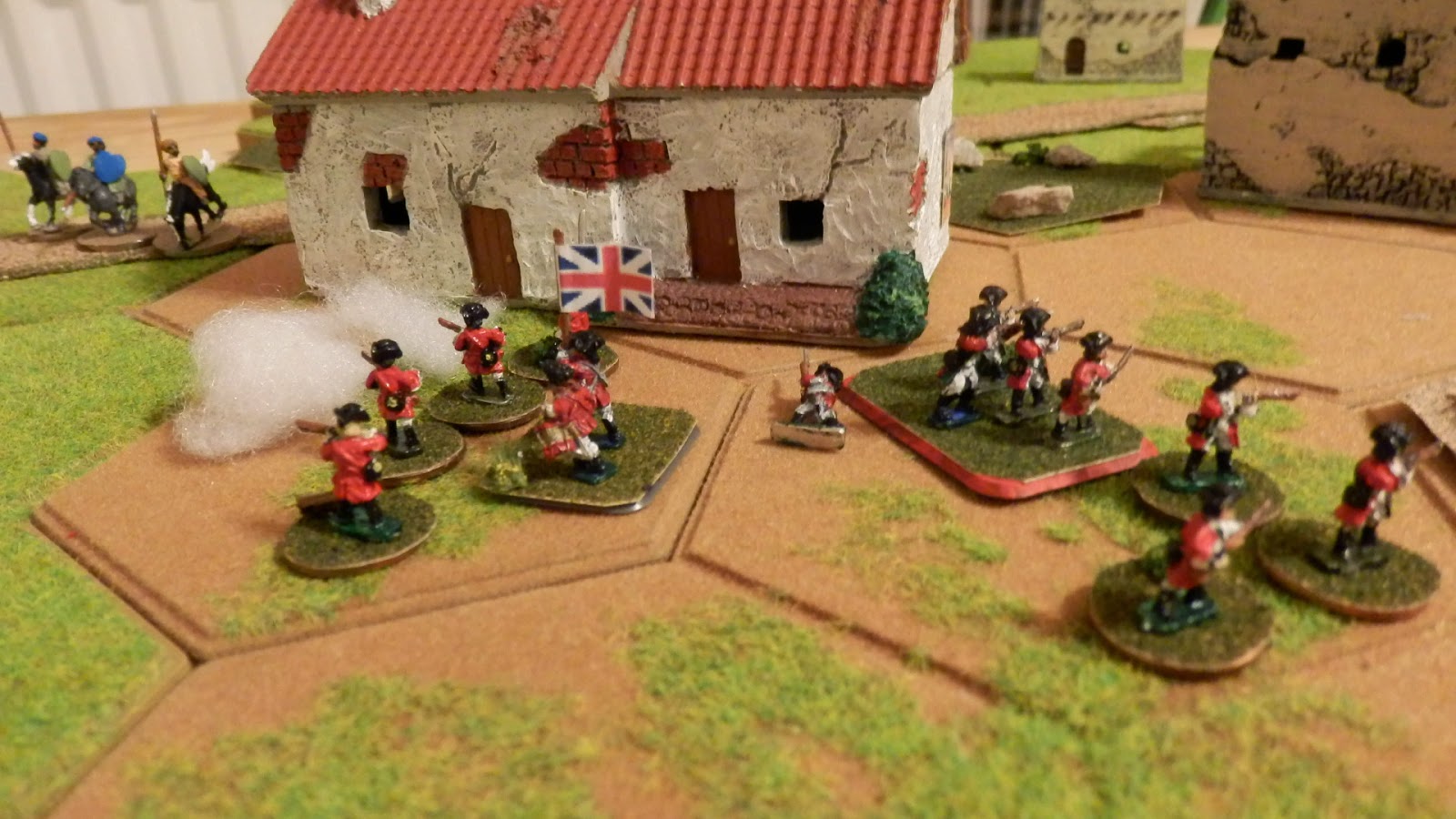 The British make a stand as the Lt is bandaged. 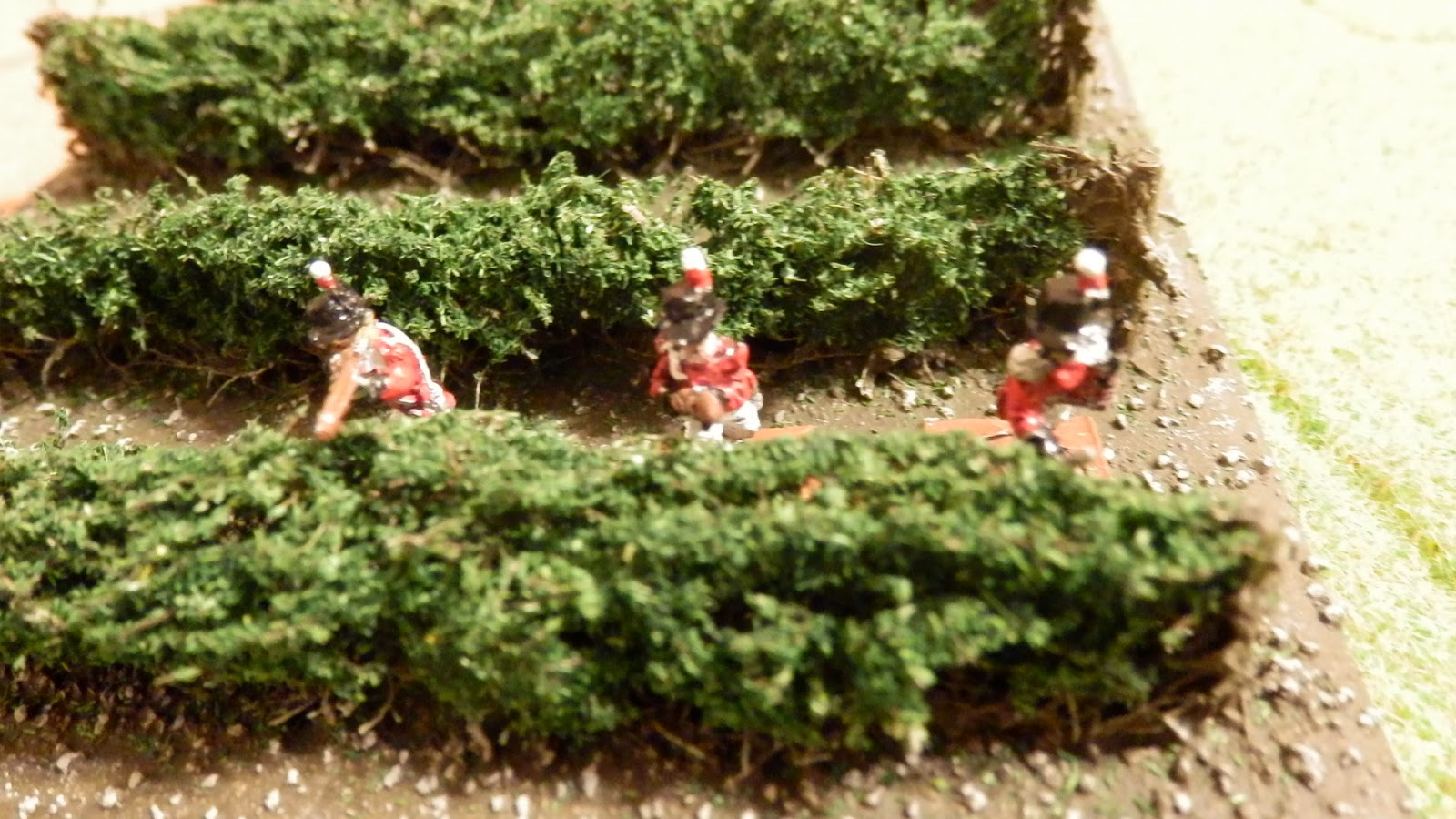 Meanwhile british marines snipe at the pirates from a distance. 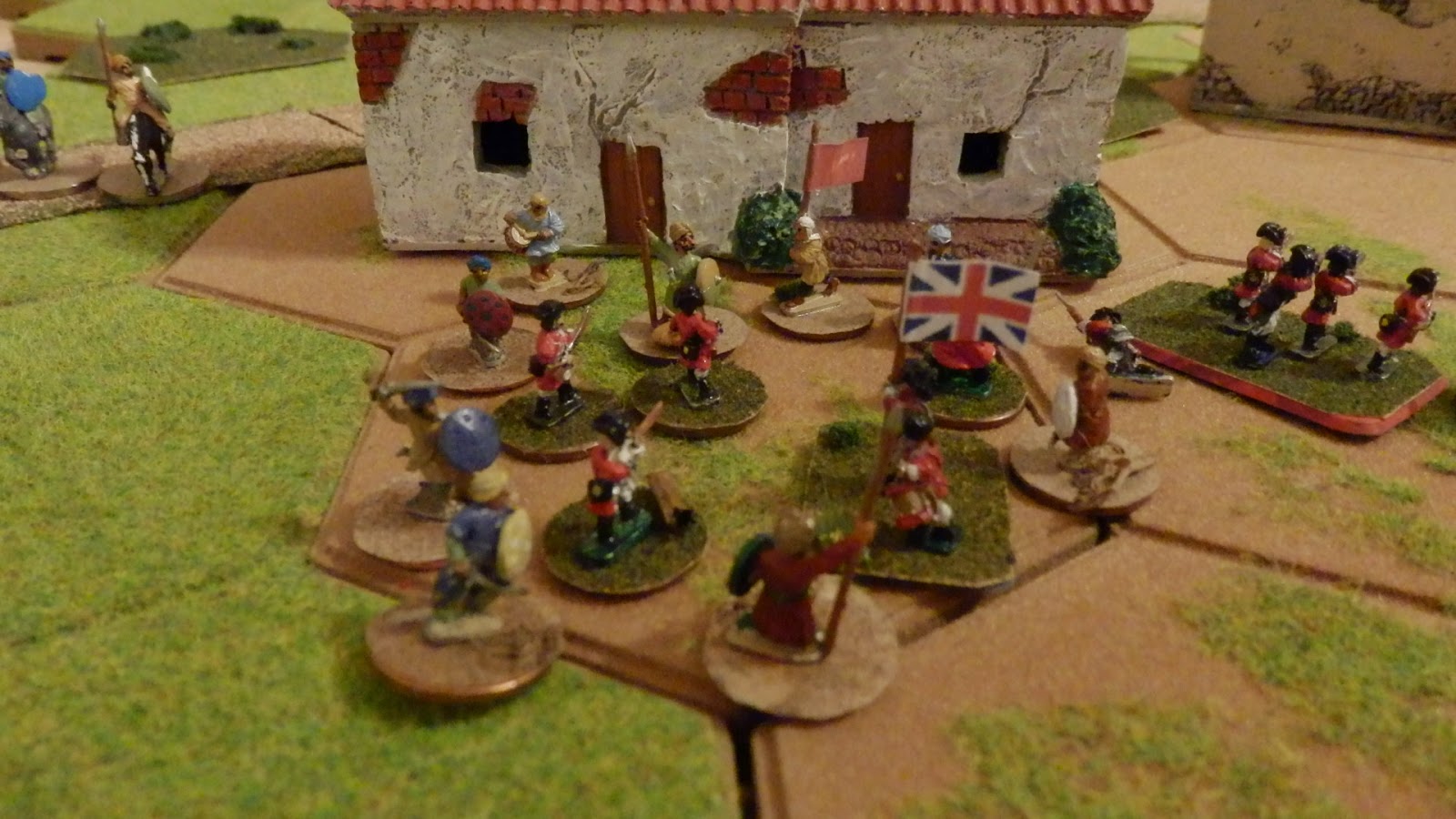 The arab infantry, buoyed with men from the town attack again!  Lt Prescot, weak from loss of blood, rallies the men to the colors!  The Arab's morale breaks but the cost in Englsih casualties is high. 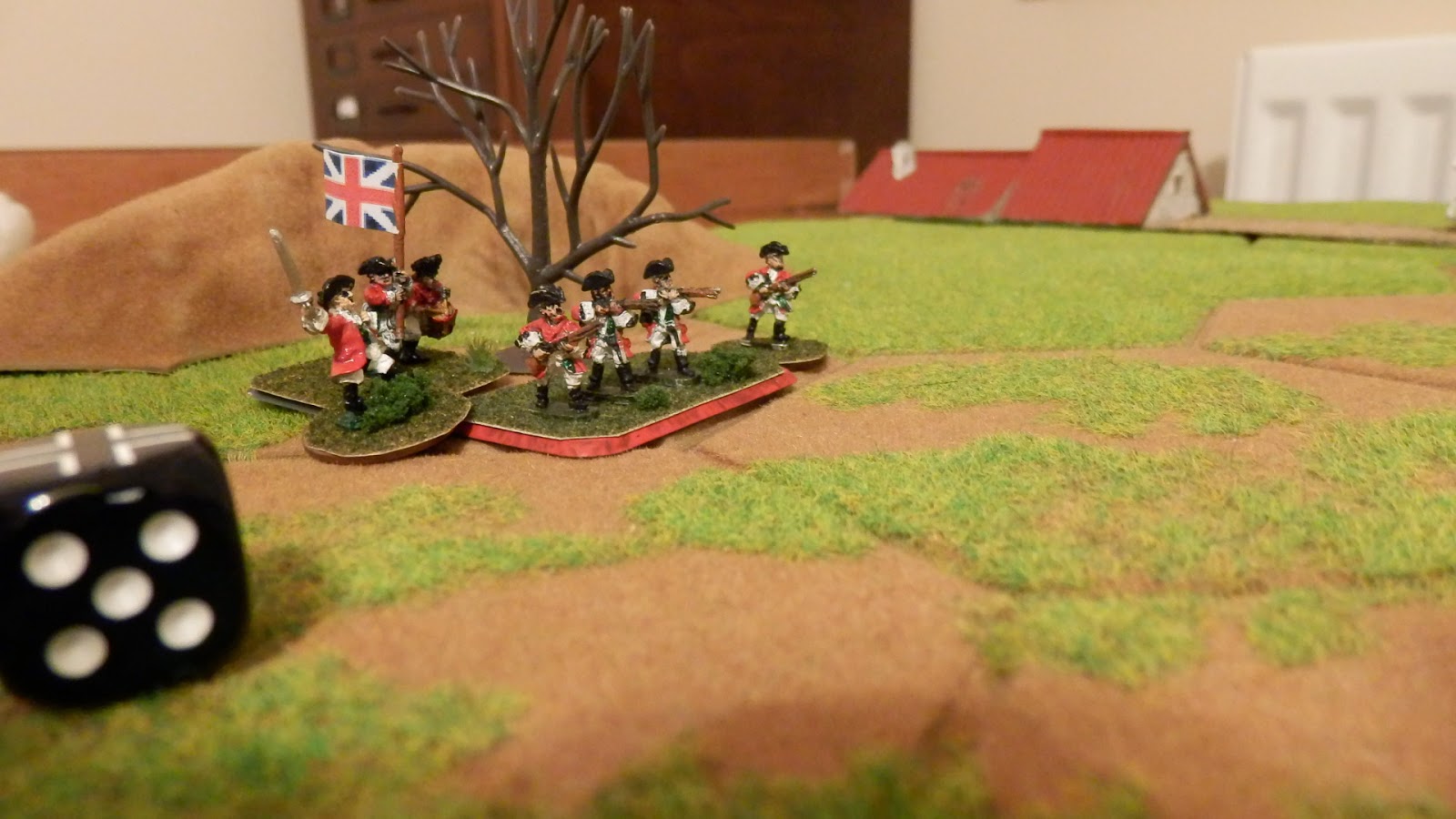 Lt Prescot gathers the survivors of the platoon and moves them back out of the town while Arab calvalry look on.   There will be no rescue today.

Great game that once again played fast.  I tried a different save mechanism that I dropped halfway through the game because I didn't like it.  This was the first game where muskets were not dominating and the enemy could actually close.  Unfortunatly the british payed the price.  Splitting my force was a mistake.   I still like my command rules and use the morale and fire rules straight out of Donnybrook.
For those wishing to try it the enemy had:

Captain HR Block  D 12  Gr II and 8 pirates. ( all have muskets) drilled
Abdulla Jack  D 10  Gr II  mounted
5 calvalry   elite
Sergant  D8  Gr I leader  with 6 raw infantry
3 prisoners controlled by pirates.   1 is D6 raw if given the chance.  All are unarmed.   One bad guy can control all three prisoners.
5 elite calvary enter bottom of board on first draw of Arab reinforcement card
6 raw infantry and banner enter bottom of board on second draw of Arab reinforcement card