Hope everyone had a great holiday and a happy New Year.  Very busy time for me with family and work.  Not much chance to game; did get one game of SAGA in with my son which I really enjoyed.  I believe he was humoring me to play it but I will take it! 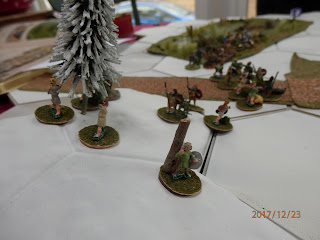 I was the Picts raiding past the wall. 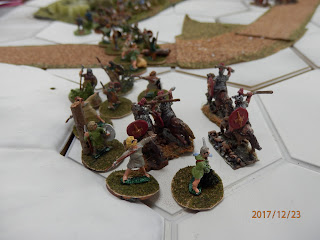 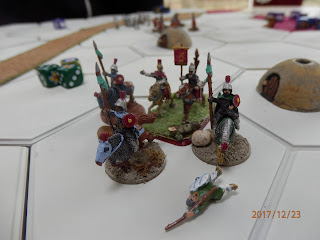 Ah the Cataphracts!  The King Tigers of their day! 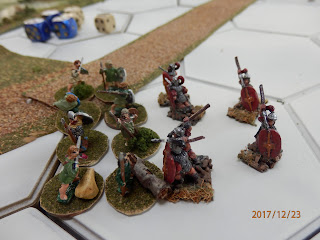 It came down to a slogging match between infantry and the Picts won!

I visited with my brother over the holiday.  He only plays boardgames.  I have been looking at a grand tactical aerial game called Wing Leader by GMT.  I bought it hoping we could play during my visit.  I was intrigued as each counter is a squadron but you track individual losses.
I bought it; we played and had fun and have to say I am still enjoying it.  It is one level up from "individual skirmish" such as Bag the Hun or CY6.  You lose some of the detail at this scale but you gain a different perspective on the missions and have to make different decisions.  I still think some of the aircraft could be better differentiated and the bombing table appears so realistic as to be a waste of time; both issues I am tackling.  Also I am modifying Squadron Forward for this level as this game is screaming for it-- I can't wait.  My big decision right now is whether  to put the player as the group commander ( despite the name that is really the players role in the game normally.) or as the wing commander.
Here is a quick run through of a game from the weekend. 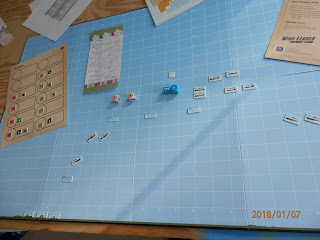 China 1944.   2 squadrons of Peggy bombers are bombing a US base.  They are escorted by 3 squadrons of Oscar IIs and a flight of Franks.  ( Out of a whole squadron they could only get 4 running today as the initial Franks had huge problems with their engines.)  14th AF scrambles 2 squadrons of P-51Bs and a squadron of P-40s.  2 squadrons of P-40s are vectored in from elsewhere to help with defense.  I rolled for weather ( modified from Squadron Forward) and got dense clouds and a whiff of scattered clouds.
As you can see the game takes place from the side and the counters are gorgeous.  I rolled for squadron status as per Squadron Forward. 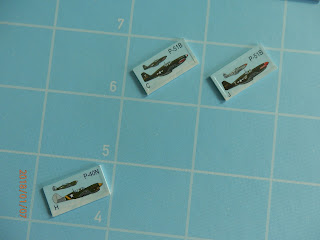 Americans climbing to intercept.   Due to weather and the reliance on ground spotters they had a 33% chance of having their vector off and it was.  ( too high and to the left) 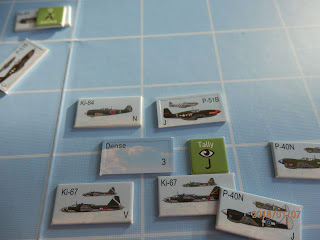 The mustangs and the Franks miss each other in the clouds.  The Warhawks find the bombers but only down one. 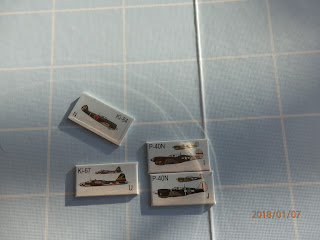 Franks to the rescue!   4 Franks (vets with 1 ace) against 16 warhawks ends up with both sides losing one!!  Daddy I want a Frank to fly!  A cool thing this game takes into consideration is cohesion of the squadron after the encounter.  Squadrons get strung out and planes damaged and become less effective therefore you have to pick your battles.  All squadrons hang tough. 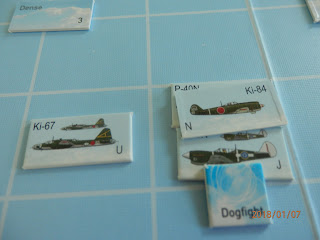 So, the warhawks want to go after the bombers; the franks want to protect the bombers.  You can attempt to embroil your foe in a dogfight which fixes him in the spot.  Tough decision here; franks are outnumbered 4:1- do you tie up all the fighters or try to pick off just one squadron at better odds?  Would never have to make that decision in my tactical game.   The Franks decide to sell themselves dearly  and manage to tie up all the warhawks as the bombers proceed to the target.  Cool!   They succeed in their goal but lose 2 more while only downing more 1 warhawk. 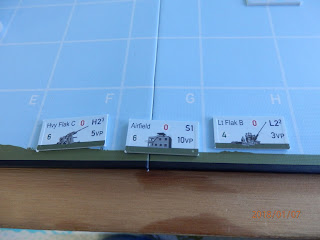 The target.     Unfortunately perfectly safe from a level bomber given the number of negative modifiers the Peggy's got from bombing at 12K feet.  I understand bombing was inaccurate; I also understand an airfield is a big target- you think we would have hit something!  Even one bomb on a reserve taxiway would have boosted our Frank pilots morale!  ( Lee, seriously we have to  work on this.  This is a way better story if the Peggy's damaged the airfield!  :  )   ) 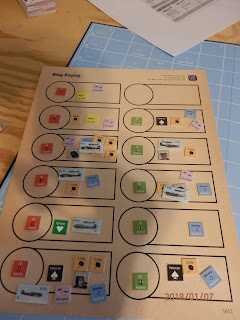 Here is the status board at the end of the battle.  I think you can get a flavor for some of the detail in the game.
I haven't played a board game in 2 years but I am really enjoying Wing Leader.  Despite my complaints ( which are minor ) Lee has done a great job with this game.  I originally planned on converting this to miniatures but the counters look so good that I haven't felt the need to so far.  The thing that might push me there is being limited by the counter mix of planes that come with the game.

Posted by FlightDoc at 7:17 PM No comments: