Finally got some French Foreign Legion painted up.  Also managed to paint up 5 African soldiers patterned on Angola.  Decided to playtest a new scenario called "Injun Country".  Basically your squad gets stuck out in the badlands and has to wait for help.

Republic of Congo    1990.  France has yet again sent in her legion to protect interests and maintain order.

Screeeeeeeeech!  Thunka, thunka thunka!.  Sgt Barrie looked behind him and saw the commandeered truck his squad was riding in  slow to a halt by the side of the road. They had just passed through a squalid village on the way back to camp and now this! 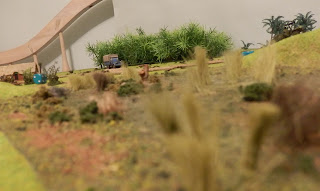 Lt Lorray decided the convoy would keep moving as the trucks and NGOs needed to get back.  He would send a truck back to pick up Sgt Barrie and his 1st Squad of legionaries.  He did leave a MG jeep behind as well for "a little protection."  " You will be fine Guy.  We are in the middle of no where."  he said.   Famous last words Sgt Guy Barrie thought. 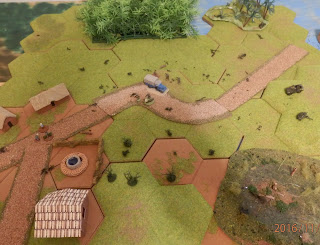 Sgt Barrie puts the jeep and two men on the right hand hill overlooking the town and jungle.  He places two men behind the truck looking down the road to the right.  He and three men face the town where curious villagers are starting to form. 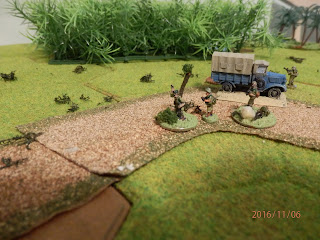 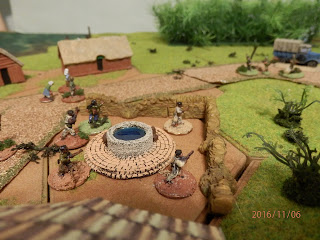 As Sgt Barrie tries to disperse the crowd several armed men show up for a drink!
Sgt Barrie curses his rules of engagement that states he is not to fire unless fired upon.  He considers firering anyway but iron discipline is his nature. 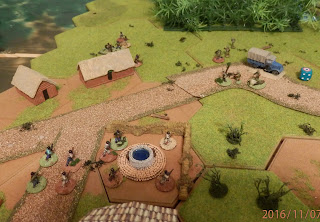 Fortunately one of the tribesman can't hold his fire and unloads before the rebels have a chance to fully deploy.  IT'S ON! 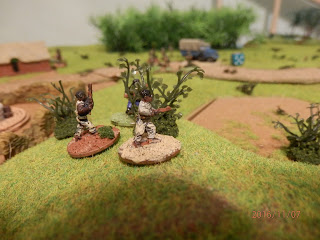 The battle is very one sided as the FFL's martial skill shines through.  One legionnaire, a Dane, Pvt Pedersen is seriously wounded and moved behind the truck. 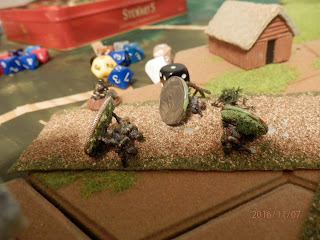 My brand new african soldiers 6/8 don't even last a turn! 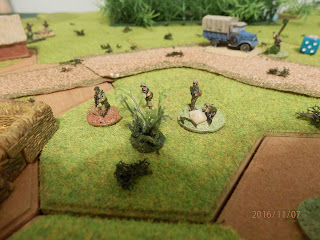 The legionnaires are doing so well they actually move up to the well. 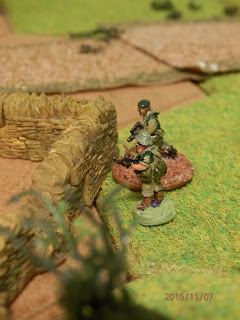 Now they can sweep the streets with lead. 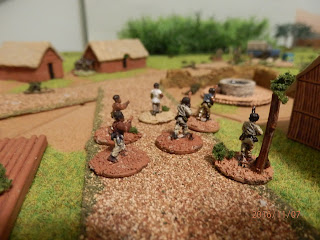 These guys run right into the lead! 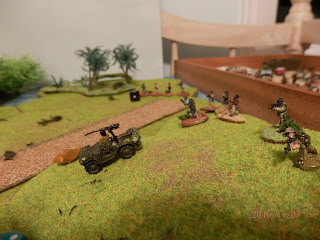 One moment of peril for the FFL.  Some rebels with a RPG manage to maneuver up the road behind the jeep. 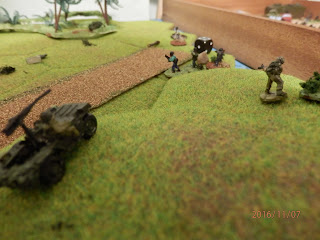 The gunner on the jeep is stunned by a near miss but the two infantrymen drive the attackers off! 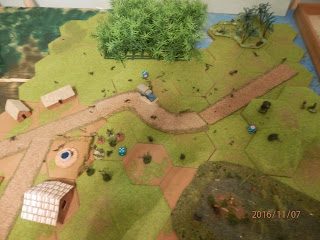 After a 15 minute firefight all is quiet.  Sgt Barrie thinks out loud, " I can't wait to get out of Injun country!"

Really fun game.  The rebels ended up with 40 men all told.  They were all 6/8.  Will need to "roll up" a formal FFL squad now for Platoon Forward.