The Romans are here!

Received Saga Aetius and Arthur on Thursday!  Have been waiting for this since I bought the original Saga years ago.  While I have been mildly interested in the Viking age after living in England for several years I have always thought roman legions were cool.  Alas, this book is centered on 410 AD and the fall of Rome rather than the height of the legions but at least we have romans now! 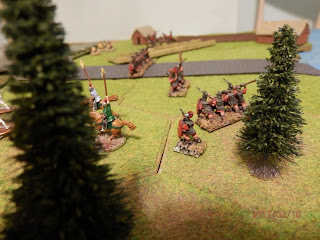 Roman soldiers, a centurion and the cool horn thing!

So what do you get for a lot of money?  If you like SAGA in general you will not be disappointed.  There is a lot more of all the stuff that makes SAGA such a great game.  The production values of the book are great and all the factions are well done.  The Huns are better balanced now while still being excellent horse archers and I feel their battle board makes the old "Steppe tribes" board obsolete.  I still think I will give their warriors the "eagle eye trait " since I don't have to worry about play balance.  ( If you take them as a mercenary they get it so why can't they shoot for their own faction?) The Huns celebrating their Eagle eyes!

The Goths are basically Vikings that ride horses.  ( This is only after one play.  One thing I have learned is there is often a fair amount of subtlety in the battle boards.)  The Saxons are foot soldiers.  I haven't figured out the Picts yet.  They appear to need broken terrain to succeed.  I haven't played the British because, well, they have Romans available.
And of course they have the Romans! 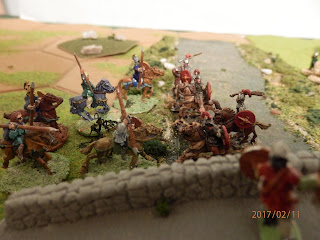 Gothic and Roman cavalry clash while a Goth infantryman looks on.

The Roman board using Impetus much like the christian board uses piety.  Most importantly for me, the board is not tied to the 400s with Rome being more cavalry heavy and should work just fine with heathguards as infantry such as during the 100s.  ( In A & A the cavalry are elite and the infantry are the warriors which is historically correct.  Easy enough to change though.) 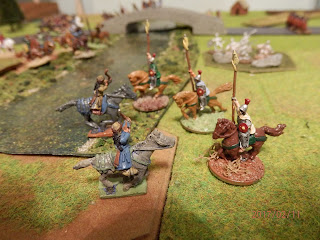 The rules include several nice mercenary units including step tribes, germanic tribes, and deserters.  ( Also has Sea Wolves which I don't understand.) 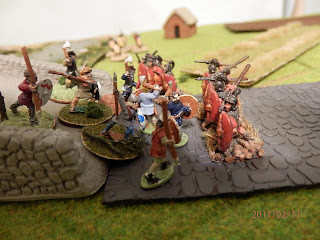 Now we are talking!  Romans and Goths at the bridge

A nice addition is a section on how previously released factions fit into this historical period.  The Franks, Byzantines, Scottis and several others from the north are retrofitted which further expands the fun. 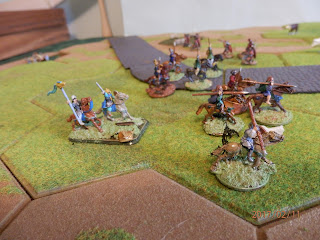 There is a page on several historical scenarios for Age of the Wolf which I can't wait to try.
The only thing I was disappointed in was the campaign game.  Romans manning an outpost against a barbarian hoard, what is not to like?  There is only one scenario!  Yes, you get to pick a bunch of stuff but each time you play one scenario.    I suspect that will get boring fast.
So I will have to design my own based on all the good stuff from Age of Wolf.

Overall the supplement is well worth it if you like SAGA.  It adds a great deal more of what makes the game fun.  Overlook the campaign game and you will be very happy.  Did I mention it had Romans?!

Playing ARVN is clearly not obscure enough; I have to play the South Vietnamese ( or actually the "independent" Army of Vietnam.) in 1953.  Reading a great book recommended to me on TMP called Embers of War.   Really shows how French thinking evolved during the conflict and how the US saw it as an Anti-communism war; pity.
Back to the game.  Rolled up a squad using Grunts Forward  and they have had 3 actions.  My squad leader is "evil" which is a first for me.  It is actually fun seeing all his opportunities in this light.  The LT is a weak Catholic whose Dad is a government official so he is filling time.  The second squad leader is at odds with my Sgt, Dang Tong.  Because the platoon's performance has not been good up till now a french advisor is tagging alone to see Lt Chu in action.

Lt Chu briefed the squad leaders on the mission though he was clearly nervous at having to brief in front of the French officer.  "Intel has pinpointed this village as a supply point for the Viet Minh.  We also think that the temple is a HQ of some sort.  We need to go in fast and hard before they can move or destroy anything! ( trying to sound confident in front of the french officer)  Sgt Tong, you will enter by the road and draw any fire and deal with it.  Sgt Chu will accompany me on a flanking manuever to get to the temple.  There will be a french patrol boat on the far side of the village so no one can escape.  Remember, speed is essential!"
Characters
Lt Chu         Inept/religion   Father is minor government official      Gr I with hesitant card
Sgt Dang Tong 1st squad     Evil/ pleasure     Orphaned and raised on extremely hard work on his uncle's farm                             Gr I
Cpl Binh  ASL  1st squad   liberal patriot/ alcoholic              Gr 0
Sgt Trang Chu 2nd squad   Gambler/wealth       Gr II leader
1 LMG attached with Gr 0 leader
1 French observer( Gr III leader) and 1 80mm MTR available.
Vietnamese National Army is 8/8 for you FOF fans.  VM irregulars are 6/10. 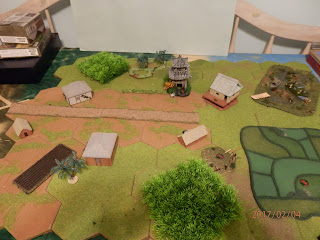 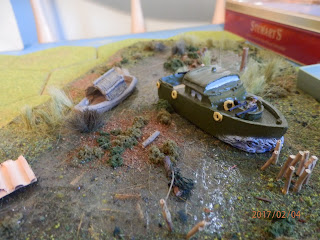 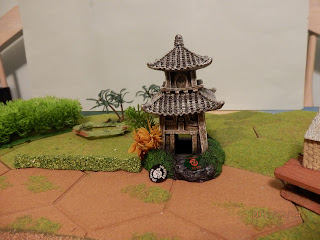 My $4 temple from Pet Smart!!!!!   Black marker is enemy blind.  Green marker designates one of the 4 areas that need to be searched.  ( One is removed per turn starting turn 7). The two officers discuss the move into the village. 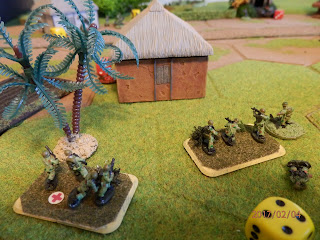 Sgt Chu's squad encounters fire from a hut.  1 KIA and they are stopped.  Sgt Chu rallies the troops and they assault the building... Meanwhile Sgt Tong encounters fire from the Buddhist temple.  The fire is accurate and the squad sustains 1 KIA and 1 WIA.  Sgt Tong is pinned down and actually feels fear momentarily.  This feeling is eclipsed by shame and anger as Lt Chu ( of all people!) has to come over and tell him to get moving.  ( Lt Chu braved sniper fire to deliver this message.  Of course, he only delivered the message after the Frenchman suggested the attack was stalled.) 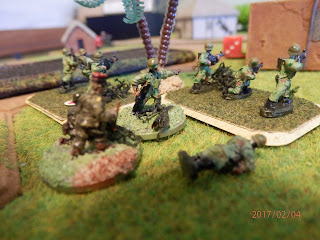 Meanwhile, Sgt Chu's assault fails costing yet another KIA.  The frenchman comes to rally the squad.  Under his tutelage the hut is hammered by the LMG and several grenades.  When Sgt Chu assaults back into the house it is empty! ( Darn those tunnels!)  Sgt Chu's men can't find a tunnel though they suspect one must be there.  But they do fine a large store of grain.
Meanwhile... 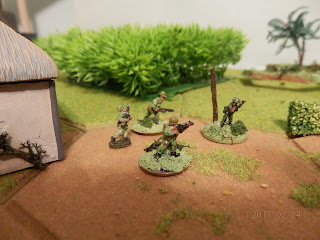 Sgt Tong is determined to prove he doesn't need the LT for anything and charges the temple.  The squad makes it through the sniper fire rapidly and enters finding a lone gunmen trying to escape.  He is quickly captured. Sg tTong finds a monk hiding a roughs him up looking for intel ( told you he was evil!).  The monk remains stoic and Sgt Tong would have killed him but the Lt catches up just at that moment and Sgt Tong doesn't want to take any chances. 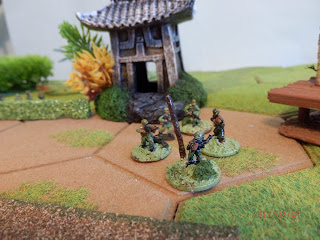 Sgt Tong with his prisoner.

With the temple captured the VM resistance quickly ends as the east part of the village is under effective fire from the french gunboat.  The Vietnamese search the rest of the village and find nothing.  Still it is a victory!  They capture the village with all the grain and sustain only 4 KIA.

Post game Lt Chu is impressed with Sgt Tong's capture of the temple and netting a POW.  1st squad's KIA is not replaced yet but the squad continues to have high confidence in Tong's abilities. Sgt Tong also meets a black marketeer who needs a favor.  For the right price Sgt Tong has agreed to raid a warehouse with the squad.  He reasons he can take the men out on a training mission and stumble onto a VM drug cache.  Yeah, the LT will buy that.  He will pay his squad to keep quiet and threaten the corporal with exposure of his alcoholism if he talks.   Being evil is fun!

Grunts Forward generated the following OPFOR for this scenario:
2 squads of 7 men each with 2 leaders ( 1 Gr II and 1 Gr I), a LMG and a sniper.    1 LMG came is as a reinforcement on turn 4.