Sgt Lawrence gets a medal

I have been playtesting Grunt's Forward for about 40 games now.  One of the cool things it introduces is the ability to obtain a medal.  Obviously they should be hard to get but at somepoint I had to roll well right?
This was a very short battle that ended up being very one sided.  For initiative Sgt Lawrence kept roll a "6" and his cards kept coming up. 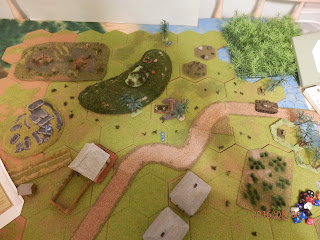 Object is the large hill in the middle.  Lts plan was to have the tank and MMG lay down covering fire while 2nd squad ( Sgt Lawrence) moved from the jungle to assault the hill covered by smoke.  1st squad would follow to mop up.
105s worked over the hill to little effect but one round was short and hit a NVA recoiless rifle!
Then the smoke rounds landed perfectly.
I will let the citation take it from here: 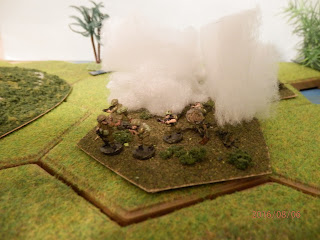 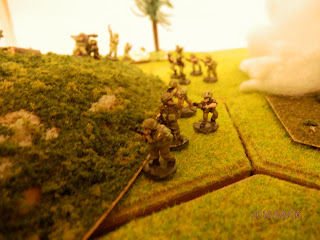 to assault a critical hill that was heavily fortified with a machine gun/mortar and infantry.  2nd squad, under Sgt Lawrence's leadership cleared the hill manned by at least twice there number. 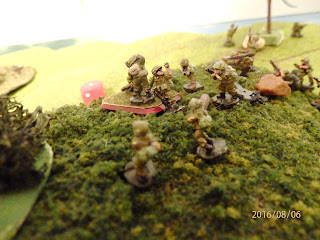 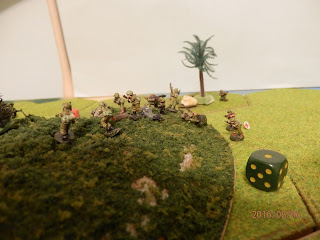 For gallantry and leadership under fire in the best traditions of the United States Army, Sgt Duane A. Lawrence is hereby awarded the Silver Star with "V" device.
( I took some liberties with how real medal citations read for effect!) 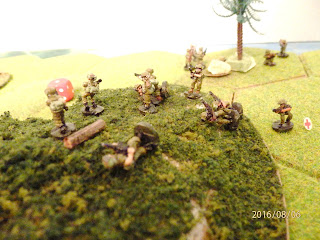 Sgt Lawrence took 8 men with him and had 1 KIA, 3 WIA to include Cpl Black.  They actually pushed 12 entrenched  NVA off the hill.
I actually had enough "points" earned to start rolling with the Distinguished Service Cross.  Missed that but was lucky on a roll for the Silver Star.  The squad was actually happy for Lawrence as all 3 WIA quickly returned to the unit.
Am working with 2 friends of mine in formatting Grunt's Forward and ensuring it flows smoothly.

Also got one game in of Squadron Forward using BTH.  Used my P-38 Headhunters on a barge busting mission. 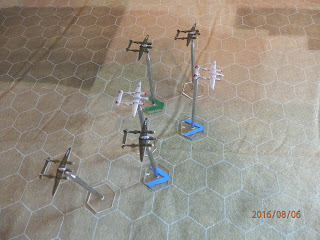 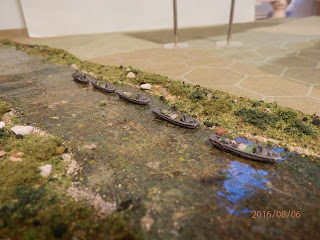 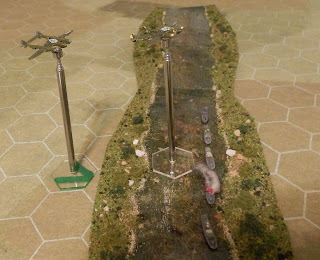 One barge sunk, one damaged.  And Lt Porky Sullivan bags an Oscar!


Posted by FlightDoc at 7:11 AM No comments: