As you know I can't keep focused on one front or even one type of battle.  Last weekend I used my Grun Hartz squadron with Squadron Forward.  They have actually only had two other missions but have done reasonably well.  I say "reasonably" because 12 kills on the russian front is not all that great.  Matter of fact I play that germans don't reach Ace status until 6 kills. ( Romanians are different. )
A note on my tactical rules.  I use Bag The Hun but have tweaked everything about them so the only part still original is you roll lots of dice.  My goal was to differenciate every type of aircraft.  For Example: 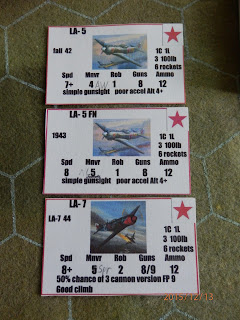 On my to do list is to publish this in a special entitled "Bling the Hun".

" Lost!  They were flipping lost thought SFW Nordman.  We are too deep in Ivan's territory.  Herr officer is going to get us killed!"  " Sir, I wonder if we need to move back west?", Nordman asked over the radio."
" Bandits 12 o clock level", FW Heil broke into the conversation.  There appeared to be several dilapidated bombers and 3 LA-5s already bearing down on them. 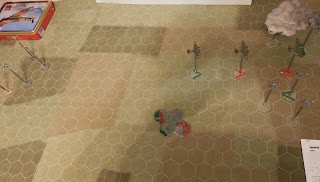 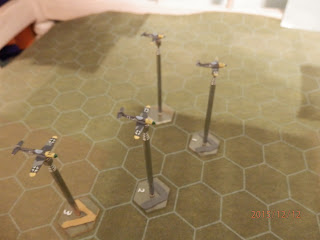 Wilke was at least decisive.  "Nordman, you go after the bombers.  I will take the fighters." 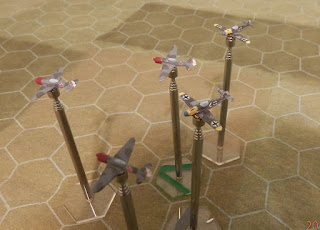 The Russian pilots were not very good and did not turn fast enough.  Both Wilke and Schmidt got shots and sent Ivan down on silk.  They chased the lead and damaged him but he kept running from the battle.

Meanwhile Nordman was chasing the bombers.  Just as it looked like a blow out, I rolled a random event and... 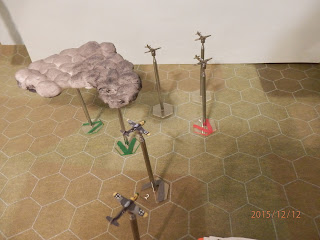 3 Yak-9s arrive after flying towards the sound of guns!  ( The red one is a veteran pilot which helps a lot to get initiative.) 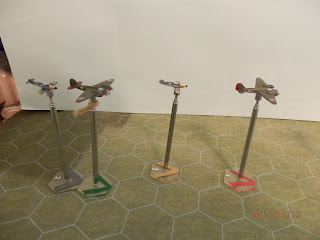 Nordman and Heil rush past them and manage to down two of the bombers. 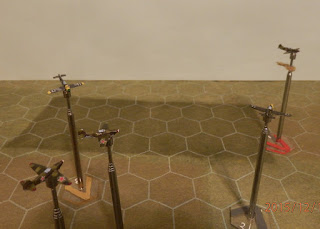 A dogfight ensues and Nordman downs a Yak for his second kill of the day.  Immediately afterwards his fuel line is cut by a russian round.  I refer to our " All Knowing Odds Table" and it is possible for him to make it back to German lines.  He does!  It is then very unlikely that he will make it back to the airfield.  He won't!  Now he is really swearing at OLT Wilke with his mike off for taking them deep into russian territory.  He decides to crash land rather than bail out.  It is probable that he can find a nice field.  He does!  Then the moment of truth arrives as the ME-109G sets down and goes screeching across the field.  He looses a wing and most of his tail but the cockpit is intact when the plane stops!  15 minutes later a german truck finds him smoking a cigarette looking at the sun.  He is back at the base 20 minutes later.

Great game with an exciting finish!  Now the background; I rolled a pre engagement event that was "navigation error".  I thought, okay on a fighter sweep what am I going to do with that?"  For the sweep I rolled encounter transport/recon aircraft.  I then rolled and it was 3 transports.  Way cool!  Wilke had a navigation error that led them deep into russia where they encountered a general moving to a new HQ.  SFW Norman, who is fat and lazy would not want to risk his life deep in russia.  One transport would have the general in it and I would roll which plane at the end of the game.  ( they missed him!)  With the 3 LA-5s easily dispatched I thought it was going to be a turkey shoot then a random event shows up; 3 Yaks!  This made for a neat battle that I hadn't even envisioned.  When Nordman had his fuel line cut and had to get back this became a great battle!

Post game the squadron did not earn a cool point because they were not where they were suppose to be. FW Schmidt becomes a veteran.   OLT Wilke goes down in the squadron's eyes while lazy slug Nordman is re evaluated.  He shoots down two planes and nurses his damaged plane back to German lines and crashes it without a scratch to himself.  Probably a good guy to have in a fight!

Drama in the Greek Army.

My inspiration for Platoon Forward was not to create a great mechanism for solo gaming or a scenario generator.  It was actually to create tension and stress for "my characters".  Some of the best tension is when it is between characters.  I read Cross of Iron and the tension and backstabbing by Capt Stransky was what I was going for.
One of my more dramatic platoons are the Greeks.  ( Big surprise.)  The story just seems to break that way.  So I tried out Combat Patrol again with the Greeks against the Germans.
April 1941
As Lt Spozito trudged back to his platoon he was frustrated.  It wasn't that the Greeks were losing the war exactly.  It was that he fancied himself a great military man and his platoon was not a very good one.  His NCOs were not very good.  He had worked with them for a year without much success.  The men too did not respond.    Sgt Hellick was an alcoholic who couldn't lead lemmings.  Problem was he was drinking buddies with SSgt Radistas who controlled supplies for the company.  Sgt Pitsikas was a country bumpkin who couldn't learn any tactics.  Sgt Basakidas was also an alcoholic but he was generous and did have limited leadership skills.  Then there was that prick from battalion, SLT Hivah, who seemed to have it out for him.
As he gathered his platoon "leaders" around him he explained that the mission was yet another blocking action down the road to Koritza.
Characters
Lt Spozito      Plesant/ family     Gr I
Sgt Hellick     pessimistic/ alcohol   Gr 0  Squad only half reconstituted after last battle  disliked by Lt sposito
Sgt  Pitsikas  course/glutton  Gr I   disliked by Lt Sposito
Sgt Basakidas  Generous/alcohol  Gr II
1 25mm french ATG 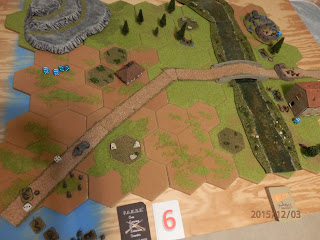 Dispositions as Jerry enters the board.  3rd squad ( the best) is in the farmhouse on the right.  2nd squad ( next best) is near the bridge.  1st squad ( which is a half squad)  is positioned in the forest on the LEFT side of the river.  His orders are to engage the germans as they enter the house.  Once they break out of the house or he is to be overun he retreats across the ford at the top of the screen.  Lt Sposito is with the ATG on the hill to ensure it shoots. 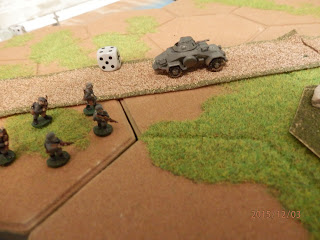 German armored car enters the board.  I love using this thing but rarely do as I don't play early war often. 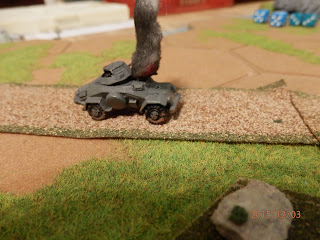 Very first shot takes it out.  Yea for Lt Sposito but it didn't even get to fire!

The Germans are stopped dead and struggle to even get to the house.  They bring up a cannon to neutralize the farmhouse. 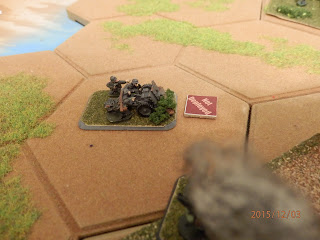 A random event immobilizes it for four turns!  Haven't they ever set this thing up before!
The german officer is a victim of a lucky shot to make things worse.

For those of you that have played "rearguard" before you know that some blinds come in on the side.  I had one "A" and one "C" to come in. 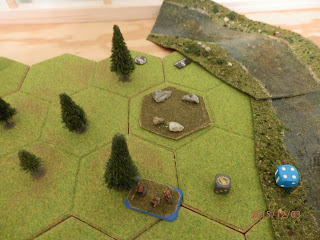 The two blinds come in right behind Sgt Hellick's crew.  I hate when my own game smokes me! 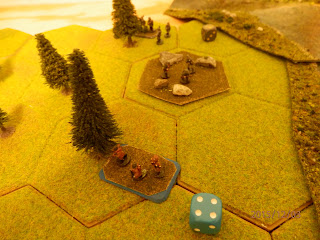 After the dice are rolled the germans have a squad with a Gr I leader. 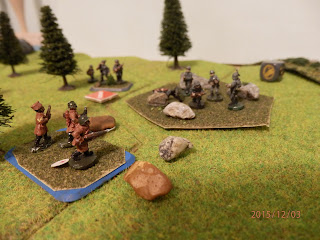 The Greeks turn around and start fighting for their way out.  ( Each hex is 20 yards)  The nearby stones are morale markers.
Lt Spozito shifts second squad's fire to the new threat but keeps the ATG and 1st squad firing at the rest of the Germans.  A flare comes up from behind; the signal for Spozito's platoon to withdraw.  He packs up the ATG and orders 1st squad to withdraw.  Sgt Pitsikasasks for permission to cross and help Sgt Hellick.  Lt Spozito declines saying covering fire will be sufficient.
The platoon watches Sgt Hellick's attempted escape. 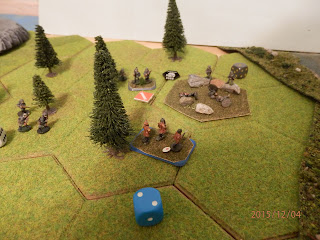 The squad is down to four men.  The German squad to their front ( un be knowst to them) is pinned after their squad leader is killed.  As germans start to come up from their side Hellick knows they have to make a break for the stream since his comrades are not coming to his aid. 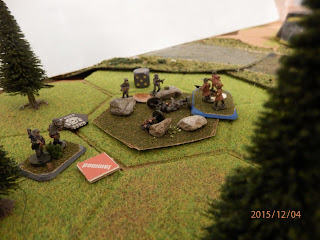 The greeks win the hand to hand losing only one man.  ( I like the way Combat Patrol does melee but up the modifiers.)
At this point another random event generates a hero for the germans.  The German machine gun team clears their jam and charges the greeks. 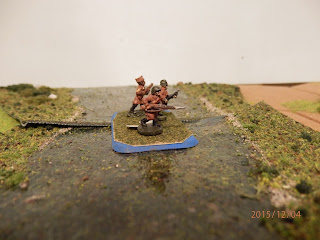 The Greeks are faster and start across the ford.  LMG bullets trail them as 2nd squad tries to suppress the LMG.  But how do you suppress a hero?
In a scene reminiscent of the movie " Platoon" all three men are shot down before reaching the bank.

As the last body falls, Lt Spozito orders 2nd squad to withdraw.  Nothing is said but the men are uneasy and the Lt has suddenly become very unpopular.

Great game with unexpected drama to boot!  Morale for 2nd squad goes down and Lt Spozito becomes unpopular.  The Platoon is not issued any grenades because SSgt Radistas ( Hellick's drinking buddy) can't find any.  SLt Hivah ( battalion S-1) actually does nothing so far.  An NCO is not available so Pvt Ditrtkas is promoted from the ranks.  He is grade 0 but not an alcoholic.

I still really like Combat Patrol.  It is smooth and handles differences in training well.  ( I gave the Germans 2 extra cards.)  It ties in well with Platoon Forward.

For those of you that want to try this the Germans had
2 squads of 10 men with Gr I leaders.
1 Lt who is Grade II and a 50mm mtr.
A 75mm short cannon. ( Think it is called a Sig or something like that.)
At the top of the board on turn 5 a third squads enters with a Gr I leader.

Posted by FlightDoc at 5:13 PM No comments: