External playtesting for Release the Hounds is "Dead in the Water" as all my playtesters have abandoned me.  No worries, I still have the rules and am continuing to work on Flotilla Forward! Am now working on bombardment rules. With my Soviet Destroyers painted up we enter the Polar Coast!

Kaptain Doydz was excited that he was being given an exciting mission for his ships!   A bombardment of the Fascist artillary positions.  With any luck the Kriegsmarine would react.  The old navy men were like women and wouldn't let his destroyers take on the Nazis usually.  All he could do was lay mines.   Tomorrow would be different!

The plan was to arrive off the coast 3 miles away, slow to 10 knots and use map fire for 15 minutes and then retire.

As the russians started to fire to the left of the lighthouse... 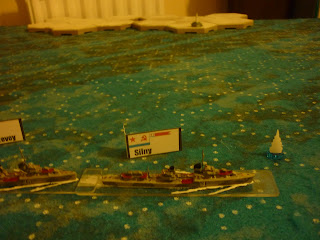 Light artillery fire coming back from the
Polar Coast
The Storozevoy continues to pound the artillery while Doydz's gunner officer finds a battery of 88s near the lighthouse and a duel commenses.  The Nazis are given a good pasting (actually just temporarily neutralized) while a lucky hit knocks A turret off balance and it can not rotate properly.
While this is occuring... 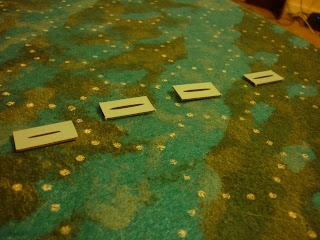 A look out sees shapes on the horizon!
In Flotilla Forward these are probablly DDs but can be torpedo boats or even a Light cruiser!  They turn out to be 2 Maas class DDs and the battle is on!! 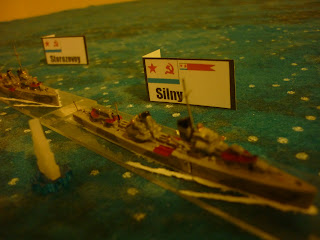 For Workers Everywhere!
Unfortunatly early in the battle... 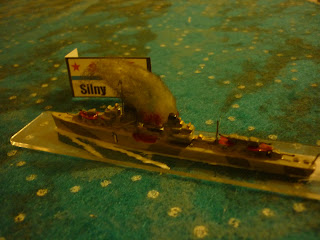 Silny with minimal damage but a large fire!
With his ship on fire Doydz moves upwind while his guns (minus A turret) continue to fire.   The Soviets manage to pound the lead german DD﻿ and it sinks!   The remaining German DD retreats.  (Sorry I forgot to take pictures of the battle!)   The Storozevoy is lightly damaged.    Unfortunatly as the Silny makes its way back to port at 15 knots the fire continues to spread  (Soviets stink at damage control) and Doydz must eventually give the order to abandon ship.
Fortunatly this is seen as a victory by his superiors as the Germans lose a DD and the bombardment was a success!    The Storozevoy is quickly repaired and Kaptain Doydz meets Mrs Rennivon the Commisar's wife and falls in love!   Not a good thing even for a party member.
Great game and challanging taking the Soviet side.   I ordered some Minesweepers and MTBs from Morningsides which I will have to paint up soon.
Meanwhile the lighthouse still stands guard along the Polar coast... 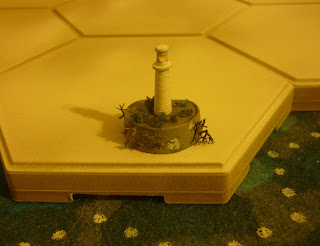 Hope everyone had a great holiday!  Mine was fantastic hence no posts.   Time for family and a trip to Spain.


We also got to Gibraltar where I visited the great tunnel.  Not too much left there from WW II though. 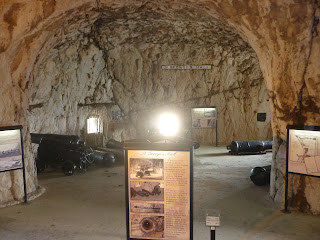 Played some SAGA, Bag the Hun and Release the Hounds.    Actually got some ships I plan to use as my Russian navy.  Next time a RTH battle report.  Today I wanted to talk about a game I bought my son.
I bought my son the X-wing game from Fantasy Flight.

I am not a huge Star Wars guy but it was a lot of fun.  It reminded me of P-40s vrs Oscars or Nates. :)   The system is simple yet subtle.  I really like the combat resolution routine.   It uses special dice but the dice take into consideration extra factors (concentration) and critical hits all in one go; elegant.   Battles are not in the vertical (except you can do an immelman) but it seems to work well.   Movement is simultaneous as plotted on a wheel which is a bummer for the solitaire gamer and combat is sequental based on pilot skill.  My son actually came up with a way to play solitaire which should work.  Roll a D6 for each pilot to determine who goes first with highest score going last.  An average pilot has a +2, Veteran +4 and Luke and Darth +6 to the die roll.
Most importantly we had a blast playing!  They don't call the Immelman turns "Immelman" turns in the game but something else.  So I was able to poke my son by referring to them as such!
We played everyday we weren't in Spain and got to spend some quality time together. Any game that can do that is OK in my book!

{ Sorry there are no pictures for this post.   I can't seem to load pictures from my hard drive anymore.  Does anyone know how to do that now?   It use to be an option under insert picture.}