Apologize for the lack of updates. Fact is I have been doing little gaming. I have received orders for England and am getting ready to move. Good news is Squadron Forward is basically done. All I have to do now is write it down and begin the painful yet important process of haivng Rich Clark make it a better product. Next should be Middle of NoWhere and I am now starting to toy with Rifles Forward.
Would like to mention 2 games I did get in. The first was with my Italians (Sgt Bustamanti) in Kenya. They were soundly defeated by the British and there were no particularly interesting post game actions. A fun game but not a great battle report. 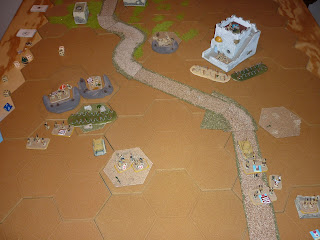 The Italian Attack.
Busta on the left.
This was as far as they got!

Staying with the desert theme I took 6 Tomahawks up from 111 SQN on a fighter sweep. Fighter Sweep is a great mission. It is similar to "patrol" in that you don't exactly know what will happen when you start.

Sdr Ldr "Puck" Poole was leading 2 vics on a fighter sweep when Dandoline came over the wireless. "Bandits 12 angles heading toward comet". Comet was a small convoy that was returning from Tobruk. Looks like they were going to earn there flight pay today! He only hoped he would get a chance to drink it.

He spotted the enemy far off and due to his experience, managed to get behind the stukas. "Must be italians" he thought. As he closed in he told everyone to break the vics and go for a stuka. He and Oldfield managed to do just that before the firing started. 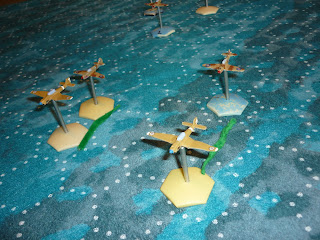 "Puck" and Oldfield execute the bounce!

It was a one sided battle despite the prescence of 3 MC 200 fighters. "Puck" got 1 stuka and damaged another one. Flgt Sgt Skinner picked up both a stuka and an italian fighter. F/O Oldfield managed a hat trick with 2 stukas and a MC 200! Of the 6 Stukas only 1 reached the ships and he missed. Sgt Harrison was wounded during the battle and crashed landed back at base. He and his plane are reparable. 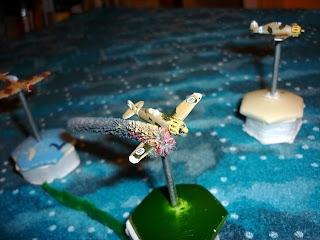 Nick takes out a fighter!

Post battle I tried to get F/O Oldfield promoted but this was denigned. Our reputation has increased and a junior staffer shows up next mission to fly with us! Lastly "Boomer" Balfour has returned form OCS and is now P/O Balfour but he wants the same respect he had when he was a Sgt!

Great battle. The Character system works well and the scenarios are fun and balanced. What I have found is that I really worry about putting some of my guys on a limb now. Unlike Platoon Forward, death is a more likely possibility for these guys, particularly over enemy territory or water. Oldfield is well liked in the squadron [jovial] and I can see everyone celebrating his hat trick. What if the next mission is a straffing mission of an enemy airfield deep in their territory?
Great fun with highs and lows!

Posted by FlightDoc at 6:18 PM No comments: