Greetings! Doing the final moving from the US to the UK. Read Coastl Patrol rules in the Lardie special. They look like a fun quick play set of rules; good show Jim! Thus inspired, I dusted off my Release the Hounds rules and tried my take on the scenario from the book.

Lt Ian Evershiem (RNR) took stock of his boat one last time. Intel had a convoy coming down the coast tonight with a light escort. Hopefully trawlers, maybe barges but not F-lighters. Ian didn't have a good answer to those yet. Draft too shallow for torpedoes, Jerry had added armor and concrete to barges, then added 88s to create a force to be reckoned with .

I did not roll for Jerry to try to play the scenario. I didn't mess with blinds but used initative similar to Squadron Forward.
Jerry
2 Patrol Boats 1 88 each Raeder's men (Avg)
4 Flak Lighters 2 Raeder's men 2 Hitler's men ( green) 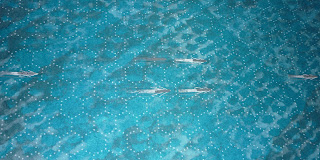 Jerry creeping down the coast 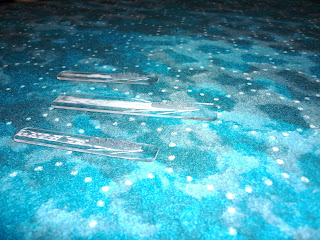 Lt Evershiem on the Hunt

Lt Evershiem had his eyes peeled for movement. A half moon hung in the sky and visability was about a mile for barges. Despite the cool night air he was sweating profusely.

Suddenly the air errupted with light and exposions and his boat came under fire from his 11"o clock. KuJ 324's gunners opened up on the Dog Boats as they radioed to the fleet of the danger. As Ian gathered his wits, a fire errupted aft and his boats started taking a pounding from 88mm and 37mm shells coming a mile a way. 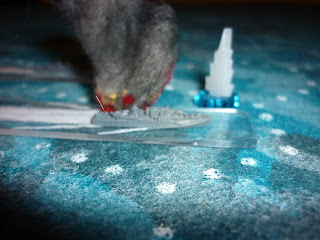 Ian immediatly doubled back as Smith broke right and Tompkins broke left looking for the merchants. Fortunately the germans did not pursue Ian but went after Smith. Why became apparent 3 minutes later when Smith sighted 2 barges. 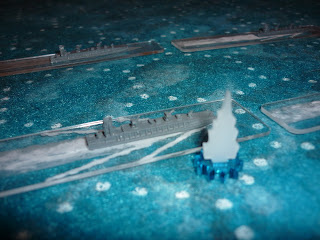 Dog 2 trying to find the range

SLT Tompkins had circled far left and was now trying to join the battle. Ian was still in retreat; trying to fight a fire aft before it blew his small craft to kingdom come. SLT Smith gallantly charged the barges hoping they were not Flak lighters. 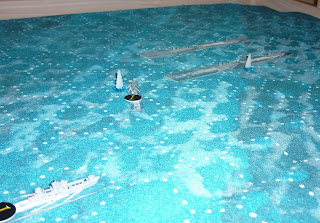 They were Flaklighters! Blast! Well the 6 pounders could still do damage. Smith bobbed and weaved his boat on a gun run and managed to damage one of the F-lighters. In return his boat was damaged and flooding. He turned for home. Ian had put out the fire but with a boat 50% damaged it was foolish to go up against Flak lighters. Lt Tompkins meanwhile had lined up KuJ 324 for a torpedo shot. He let go his torpedoes early at a mile and turned his attention to the damaged F-lighter. A gun pass revieled no significant damage to either side. But then a huge explosion (20% chance!) cut through the night. 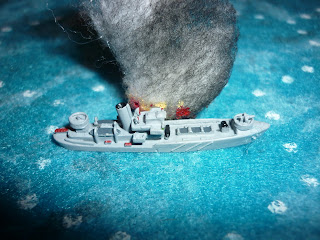 KuJ324 after the Torpedo hit
She sank in 15 minutes

With that the British withdrew savoring a minor victory!

Fun game! Would like to play it again to see what would happen if Ian's boat is not put out of action on the first turn. Will also change it to 1 Flaklighter and 3 unarmored barges.
Have actually started writing down Squadron Forward.
Talk to you next from the UK

Scenario R is available in the Too Fat Lardies Summer Special. At the risk of sounding like an advertisement, they really pack alot of stuff into their specials for 5 pounds [ about $7 ]. I always enjoy reading them; even the bits about games and history I don't play ( which is minimal).

In the editing, Rich either forgot or wisely cut out my introductory comments; for the intrepid they are reproduced here:

The Scenarios included in Platoon Forward were aimed at typical situations that a basic platoon would face. That doesn't mean we can't have a little fun. Included in this issue is a meeting engagement that an armored infantry platoon might be faced with. It is ideal for the US and German panzergrenadiers as well as the UK motorized infantry. It also works well with Russian tank riders but you should beef up the defenders a bit by ensuring your first real "B" is a big AT gun or ensure your real "C" are tanks or SP guns. Players should feel free to substitute scenario R into the scneario table wherever they wish. I often put it in in place of recon; not because it makes sense, but because I often do not wish to play recon! [recce for the St Albans group!]
In addition, this is my favorite 2 player game because, like the patrol scenario, it never plays the same way twice, allows both players to manuver and everyone gets to play with at least a couple of vehicles.
I would like to thank those of you who have given me feedback on Platoon Forward. Your support and kindness have been more than I could have imagined. Thank You.

"Fighting Joe" Legan
Posted by FlightDoc at 1:58 PM No comments:

Flank attack at the factory

Finally got my soldiers; not all my terrain but you can't have everything. So last weekend had a chance to send my Russian Platoon Forward! This is battle #5 and this is a fun platoon to play. There is tension between the platoon leader and the 1st squad leader. This is not helped by the fact that the company commander seems to favor the squad leader. It is 1943 and the Platoon Leader is a replacement coming into the company. To catch up read about the attack outside of Kursk from last November posted on this site; I'll wait...

Still no camera so I will try to describe the board:

There is a factory in the center with a plaza in front. To the right is a small collection of buildings and on the left is a small church. Behind the factory are some scattered trees. To the left of the factory is a ruined railroad station. This is all on a beautiful Kalestra hexagon board that a least one visitor doesn't like :)


If you read the post from last November you know that a reporter from Pravda is here to do a story on Sgt Shakulo. Of course the CO is not going to let the JrLT mess this up so he is going to to make sure the reporter is not killed.

Sgt Shakulo wished commerade Lennin was here. The Russian army in 1943 was not the classless society Lennin envisioned. These officers were driving him crazy! Oh, they had their place, doing grand strategy and such. They had gotten the platoon onto the flanks of the fascists today. But by and large they got in his way. JrLT Bessonov was a timid old woman. He was afraid of making a decision and was against a man having a drink now and then. Lt Konerko was better. But he was always trying to help him. Shakulo didn't need any help. He just wanted to rid mother russia of the invaders and go home to his family. Now this reporter was here asking hiim all kinds of questions. Lt Konerko seemed nervous.


By the time they got into position, a T-34 and an armored car had joined the platoon. JrLtBessonov's plan was to have Shakulo clear the houses on the right. 2nd squad would stay with the armor in the center and 3rd squad would be in reserve. As soon as the reporter said he was going wtih Shakulo the JLt decided he was leaving the reserve and going with Shakulo too. Shakulo tried to run his squad but the JrLT kept taking over. They cleared the first building easily. They became pinned down by a MG from the factory while advancing towards a second building. Lt Konerko showed up. He Ordered teh Jr LT to go back and rally 3rd squad in the plaza (the tanks had run into an 88 dug in near the church) while he shuffled the reported into the safety of a house. I got my squad moving again and barely missed capturing a MMG in the second house.


By this time 2nd squad and my own were in buildings facing the factory trading fire with its occupants which consisted of about a squad of germans supported by several MGs. We traded fire until Lt Konerko showed up with the reporter. The reporter wanted to see me and my squad "in action". Lt Konerko led our 2 squads in an assault on the factory. He told me he wanted my squad to go in first. Just as we were entering JrLt Bessonov showed up with 3 men from 3rd squad. He ran past me to make sure he entered the building right behind the Lt! Fighting in the factory was moderate until the germans retreated. The reported took my picture in the factory next to a russian flag that he had and left pleased.

Unfortunatly Sgt Mikhev was badly wounded in the attack. I don't think he will be back. JrLt Bessonov has moved Cpl Zuvich up to take over 3rd squad.


Great battle. The fighting in the factory was particularly exciting. We never even saw the company CP in the station. I am sorry I have no pictures for you all. The only other post game event of note is 3rd squad's morale is decreased.


For the scenario:
This is a flank attack (C) so set up the germans facing to the right. The russians recieve a T-34 and armored car at start.
The german forces generated for me were:
1 squad, 2 MMGs 1 88 ATG 1 company command post with 10 men with decreased morale.
1 Gr III leader, 3 Gr II leaders and 1 Gr I leader