Real World has interposed into my wargaming.  This time that has been a good thing.  Trip to Las Vegas, baseball playoffs and kids visiting has left little time or need for my normal escape.  that said, finished Cold War Tanker poolside in Vegas.  The offensive stats steadily increased throughout development.  Also added rules for unbuttoned as I think this is a big part of situational awareness.  So what I hope is the final draft is off by carrier pigeon to Lard Island.  We will see if it makes it into the special.  As I haven't gamed much here are some pics of my final playtests. 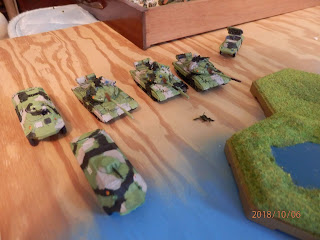 I really like the east vrs west germans for some reason! 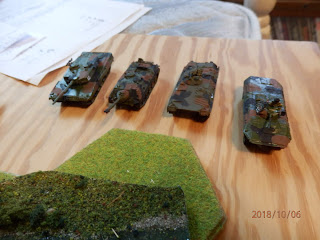 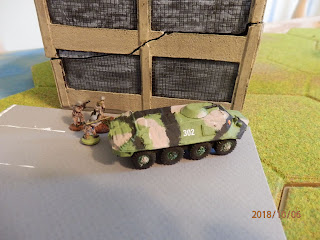 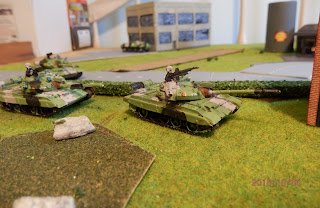 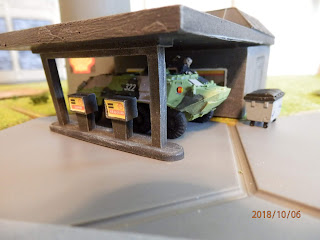 BTR stops for Gas ( or petrol) 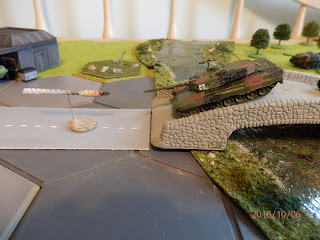 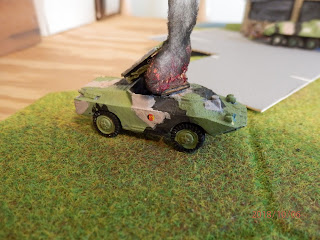 The fate of BRDM-AT every time he takes the field! 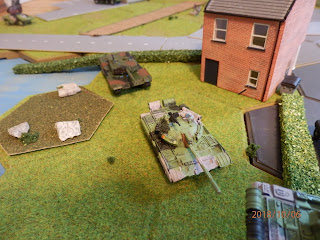 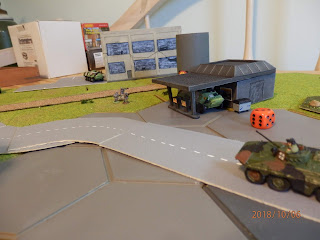 Infantry in the open don't fair well in the infantry rules. 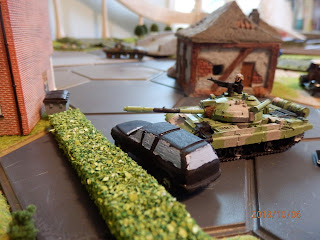 This looks like a good position and it shows off the new station wagon Joe painted up. 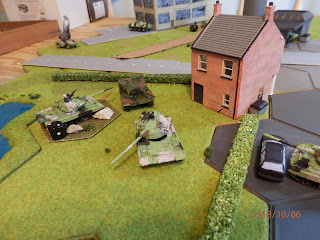 This should have worked out well for the East Germans but they lost the initiative. 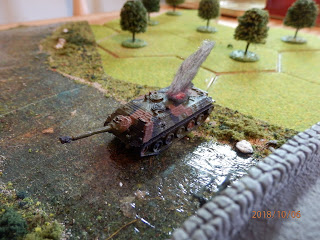 Jagpanzer meets german infantry at the gas station.  ( The ridges in the 3D models just bug me; sorry!) 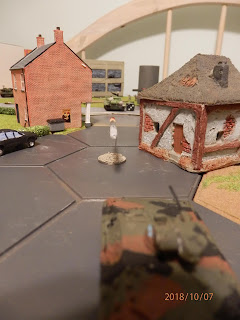 So hope everyone is doing well.
Hopefully you will see Cold War Tanker in the Christmas Special.  It has been fun to develop.

Cold War Tanker is now moving from notes on scratch paper to a proper word document in preparation for delivery to Lard Island.  Only thing left to do is figure out points for each vehicle.  After reading several neat blogs about fights in Africa I was inspired to go back to the Legion and have a go.  You may recall I wrote up a mini-campaign about the legion's exploits in Kolwesi.  That is done, just have to transfer it from scratch paper to word.  I have another platoon in Africa.  These folks are in the 80s and have spent most of their time in the Ivory Coast.  They have only had 3 battles so are relatively untested.

Sgt Bomba's mind wander to 4 days ago.  4 days ago they were relatively safe in the Central African Republic when yet more violence erupted in Zaire. 2 Platoons of the 2nd regiment rode in to Zaire to protect European interests and keep the peace.  That is what the Legion had been doing in Africa ever since Bomba had joined them 7 years earlier.  He smiled as he thought of his home in Morocco. Yes, the legion had literally saved his life.  You can only de-flower so many women before running into a family with the will and the means to take revenge.
So here he was in a land rover heading to rescue some French citizens held hostage by somebody.  If his Mom and Dad and Tamara's Dad could only see him now!
MISSION:  Hostage Rescue/   AMBUSH
LOCATION    ZAIRE
FORCES:   2 French Squads, 1 medic, 1 armored car, 2 land rovers, 1 IFV
Characters
Lt Lorray     Son of a farmer        Gr I
Sgt Barrie   French   son of carrier NCO.  Wanted to be tougher than dad so joined the legion  Gr I
Cpl Leach  Scottish   Escaped from prision    Gr O
Sgt Bomba  Moraccan  Romeo who had to leave town quickly   Gr II
Cpl Collins English   Cambridge grad in romantic languages bored with teaching secondary school
Gr 0 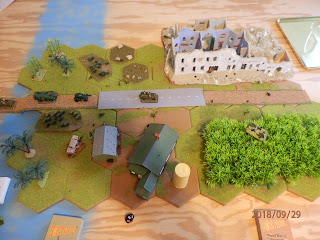 Our little band rolling towards the hostages.    This is an ambush scenario before the big rescue.  1st squad in the IFV.  Sgt Bomba's squad split between teh 2 rovers.  Normally Sgt Bomba would be in the rear but Lt Lorray decided he would ride in a Rover rather than the smelly IFV so Bomba was bumped up front.  No worries as long as there is no ambush... 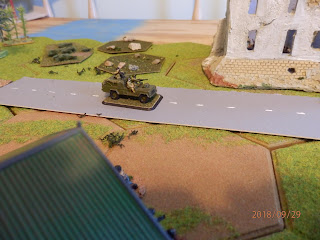 Sgt Bomba day dreaming as the miles go by... 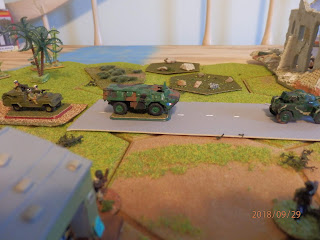 The rest of the mighty band!  ( I lost my blue background.) 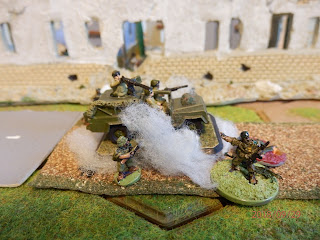 Boom!  Mine KOs the rover.  No casualties though everyone automatically pinned.  Ambush time! 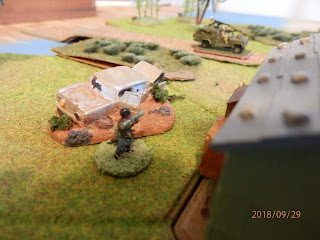 Rebels line up a shot to take care of the rear of the convoy.  He missed!

As fire erupts around the legionnaires Lorray screams for everyone to keep moving!  Responding to training they do.  Sgt Bomba and his team is pinned down by a LMG and rifle fire.  RPGs bounce off the vehicles like rain. 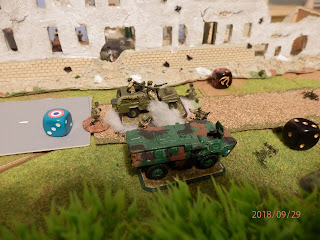 Sgt Barrie positions the carrier alongside Bomba while his squad fires out the ports into the jungle. 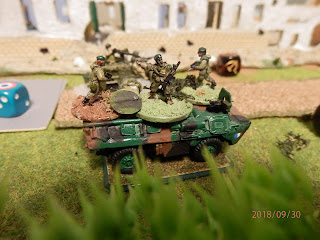 Sgt Bomba's men scramble a top the carrier.  Amazingly, no one is hit.  Sgt Bomba, always playing to any ladies present, strikes a heroic pose. 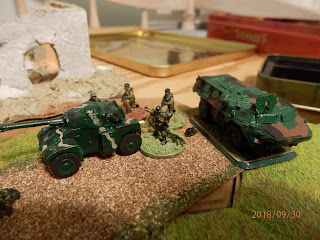 At the far edge of the ambush the AC and Sgt Bomba lay down covering fire as the Lt still needs to pass through the gauntlet of fire.  "I bet the Lt wishes he was in the smelly IFV now." thinks the irreverent Sgt. 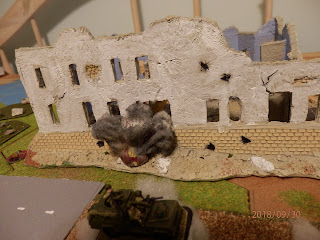 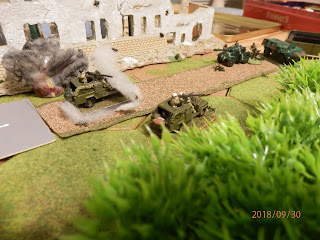 Great exciting game that played in under an hour.  The French had no casualties except 1 land rover but I did give them body armor.  The rebels had 5 KIA.  The force must now go into town and rescue the hostages.
I made the French 8/10 but I almost made them 10/10.  Think I will make them 10/10 for the finale.
The rebels were 6/10 I Grunt's Forward generated the forces using the Ambuscale scenario.   If you want to try it generated 2 squads, 1 HMG, 1 LMG and 2 RPGs.

The game was short enough I used the same basic board for a quick Vietnam Tanker game pitting 1 Walker Bulldog against a PT-76. 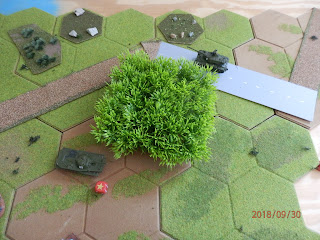 Around and around we go! 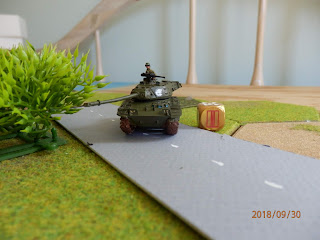 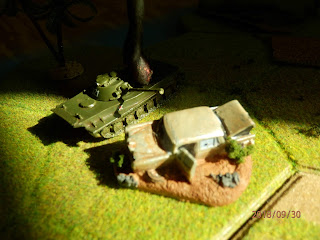