Sorry for the long brief between posts.   I have been busy!    Work got in the way and my son is home from University so we have taken a couple of short trips including one to Hastings!  (They have a well done walking tour but expected a little more from the museum.)
Played Hastings last night with him a la SAGA with a great battle where the English held on with a win by killing William! 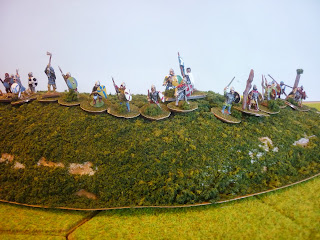 My Saxons await the silly Normans!
WI published my Sailing to New Horizons in their July's issue in which I talk about air and naval gaming and why you should do it.   I also have two more articles in the works.
David Manley sent me his quick play coastal rules Schnell rules for Schnellboote.   They are very good and I recommend them.  I like Release the Hounds better except his damage system was simpiler and more fun!   The only thing was it wasn't made for destroyers (go figure) and I wasn't keen on the way critical hits were done.   Over the last 3 weeks I have tweaked the damaged system  A couple more playtests and I will send it to him to see what he thinks.
The other good thing about having a set of tactical rules I like is I can really start turning my attention to Flotilla Forward.   What follows is a playtest of both the tactical damage rules and FF.


OberLeutenant zur See Schwartz heard engines in the distance; good-- they were in the correct spot.  He signalled for his S boots to start up and head towards the convoy lanes.  He had with him OberLt Walther, a bit cautious but an experience sailor who had come up through the ranks.  Lt Bareuther, from the privliged class but Schwartz had to admit, a natural born leader.  And Lt Jennewein, always down but another experience sailor up from the ranks.  Tonight he would let the british know they had just moved down into their area!! 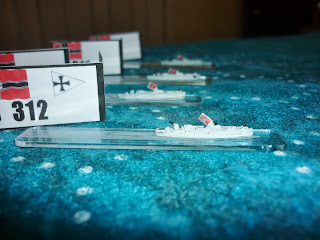 Schwartz in 312 moves towards the sound of engines! 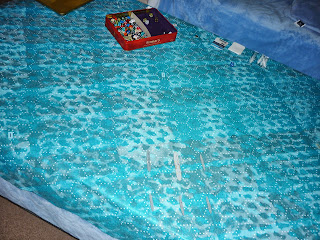 The convoy was rolled up to include 6 merchants and 3 class A escorts and 6 class B escorts.  they are noted on the table by inverted markers.   Each hex is 200 yards but you do not need to play any of these games with hexes.      The S boots approached from the convoys 2 o'clock. 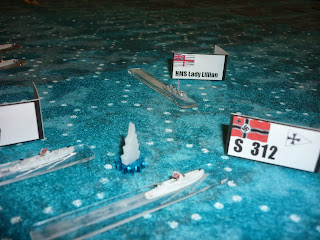 Mist must be swirling despite the stated visability because both sides find it difficult to spot.  One of the B markers on the flanks turns out to be a small ASW trawler.  The germans are after bigger fish and speed by raking her with 20mm shells.  She scores no hits but alerts the convoy. 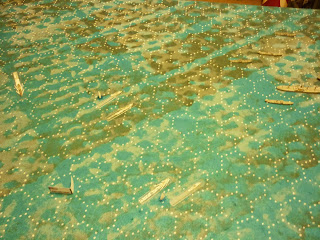 A larger ASW trawler is also on the flank and starts to shell the boats but they are difficult to hit with ancient guns!   OberLt zur See Schwartz continues blindly forward but can not spot the convoy through the mist.  The S-Boots split into pairs to widen the search. 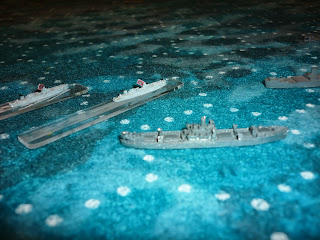 Schwartz stumbles on the convoy at 1000 yards.  (A random event dropped visability to 2000 yards)  He rakes the unarmed ships as he passes causing minor damage. 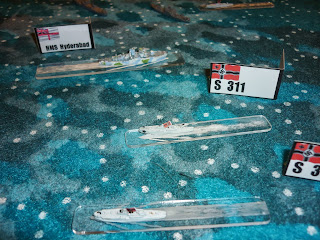 Walther isn't as lucky.  He stumbles upon a Flower class corvette at 1500 yards.  A 4 in shell finds his boat and does moderate damage and taking out his 20mm gun mount aft. 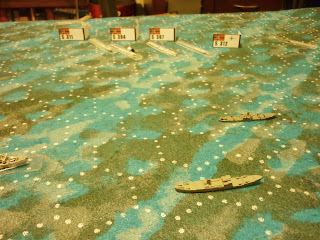 Schwarts orders his boats to line up for a torpedo run at the transports.
(The corvette is just to the left of the picture desperatly trying to prevent this.) 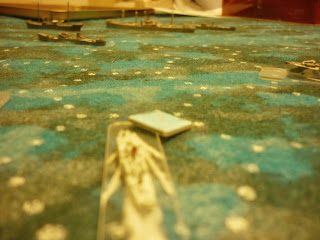 A S-boot level view of the torpedo run! 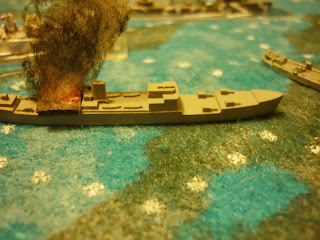 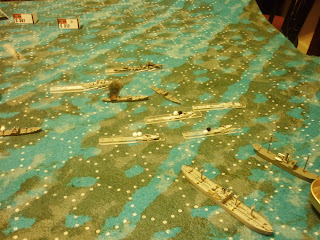 The Flottila make their escape!


The merchant ship, 1,800 tons goes down so the S-boats get their first victory!  Both S- boots are repaired for next mission.  The Flottilla meets OberLt zur See Ankiel who is a planner on the navy staff.  He is a mecurical and religious and has a run in with Jennewien who promptly ticks him off.

I was happy with the damage system and after a couple of more play tests will pronounce it done and send it to Mr Manley.    The FF went well also.    I really like these games because they play quickly, this game took 90 minutes.  For those of you that would like to attempt this at home, the british forces ended up being
1 V class DD
1 Flower Corvette
1 large ASW trawler  4in gun
2 small ASW trawlers  3 in gun
DD and corvette are considered elite, trawlers are average.
S-boats are considered average.

Posted by FlightDoc at 2:54 PM No comments: