Motivation by The Croc

Hope everyone in the US is preparing to give thanks for the past year.  Had about 20 UK surgeons over with their families to introduce them to an american thanksgiving.  It was a blast.  Sweat potatoes seemed to be the most popular!
Used my Australian platoon from New Guinea this week.  Lt Pinky Seibert is recovering from wounds.  The Sgt Major took them out on their last patrol and was seriously wounded.  Today they have to clear a section of road along the trail.  Their company CO is legandary and known only as " The Croc". 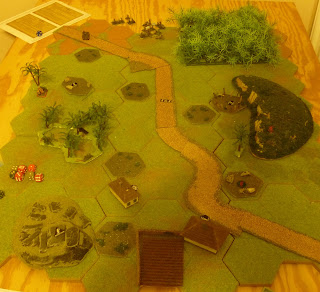 Aussies enter from the top
Primary goal is large building near the road
Native scouts revieled a MMG on the hill to Croc's right. [cool pregame event]  So that got a pre game stonk and the green hill on the left got the other one.  The plan was to have the honey enter the via the road and pin down the MMG while two section went through the jungle to attack the hill on the left.  Cpl Higgins' section would be held back in reserve with Croc.
The artillery was ineffective and the tank was driven back by the MMG!.  2nd section laid down fire on a Japanese squad near the hill while Sgt McDonnel attempted to close. 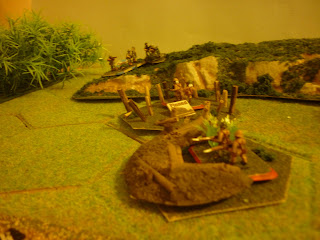 Sgt McDonnel moves up the flank! 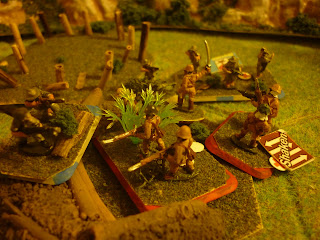 Sgt McDonnel closes with the enemy
and wins the position in a close run thing
Croc moved up Cpl Stokes but he was slow on the draw due to the MMG that was firering across the valley. (The Stuart was useless) He sent Cpl Higgins around the left to take care of an ATG that was postioned near the house.
Sgt McDonnel had his 6 survivors fire on some more infantry in the jungle in front of him.  Suddenly a cry of Banzai! was heard...
﻿
﻿ 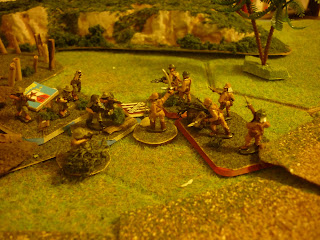 Banzai!!!!!!!!!!
[Cool random event caused the Japanese commander to act on his own, ordering a charge. :) ]  Turned out to be a brilliant move as 3 section lost 2 more men and were swept from the position.
The Croc had had enough.   He went out to where 2 section was milling about the Stuart. 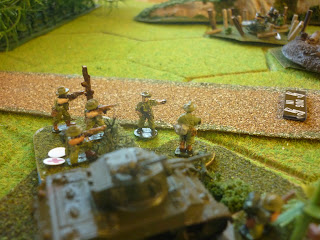 The Croc motivating his NCO and
the second section!  @#%&@
[the dug in marker is for Jap pre registered fire
per the rules.] 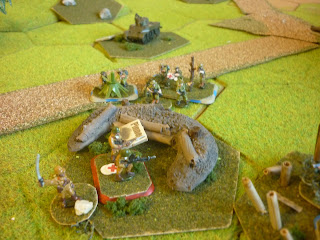 After sufficient motivation,
The Croc leads the men into the Japanese
position himself
Needless to say the Aussies carried the position and the day.  Great game with the Japanese very tenacious.
Post game a lot happens.   The Croc relieves Cpl Stokes of his NCO stripes.  He is transfered to another company to save him a little humiliation.   Pvt Collins, a hero in first section from an earilier game, is promoted to Cpl and will take second section.  Sgt McDonnel misses his roll to become a Gr III leader unfortunatley.  :(   Pinky is recovered from his wounds and will be back with the platoon next battle.    Also, while the battalion commander, LtCol Devers, is touring the unit, Cpl Higgins lets him know what he thinks of conditions for the fighitng man.  Devers is pissed. (-1 towards the platoon) The section is thrilled with their leader's bravery. (section morale +1).
[ My two events were; Higgins meets battalion CO with a negative encounter and 1st section morale goes up.  I thought that was a good explenation!]
For those of you that want to recreate the battle.  When rolling the Japanese I did not use "C" blinds but gave them an addition "B" instead and make one of the real Bs an ATG. I gave them two potential pre plotted 76mm arts as per the company attack sceanario.  If you are not rolling up forces the forces I actually used were a little light:
2 squads           1 Gr III leader
1 37mm ATG    1 MMG
For play balance I would add a section of knee mortars or a half squad plus a Gr I leader.
Happy Thanksgiving!
Joe
Posted by FlightDoc at 3:29 AM 2 comments:

Hope you all had a great Veteran's day or Rememberance day.  I had the honor of representing the base at a local ceremony and laying a wreath; very touching.  There are still people dying in the defense of freedom every day-- remember.
Been doing a lot of Release the Hounds lately and starting to work on a scenario generator for Flotilla Forward.  The game I would like to report on today is a Middle of NoWhere scneario using my Italian platoon on anti partisan duty in Yugoslavia.  This is only their second scenario.   They won the first and their CO promised them extra equipment for this one.  I rolled up a Patrol and the board turned out to be a village.  In Middle of NoWhere, unlike Platoon Forward, there is a chance that the enemy will be tipped off to your patrol and can set up a hasty ambush.  This is what happened here. As the partisans approached the village they were warned of the approaching column.

Lt Scapolini was still stuck in Yugoslavia. He had won the last battle but it wasn't enough yet.  He would bid his time.  At least it was better than Russia!  His CO wanted the platoon to conduct a patrol through a local village to show the populace who was boss.   Scapolini would take his second squad as they were weak and this would give them some practice.  The CO secured an old german AC for support.
Characters
Lt Scapolini   cunning/avarice                Gr II
Sgt Gunesto  2nd sq   unsupportive/religion    Gr I
Cpl Tarento  ASL     Cheap/ position          Gr I
2nd squad is -1 morale
I play the Italian squads are made of 18 men broken down in a 10 man assault team and a 8 man 2 MG team.  The platoon has 2 squads. 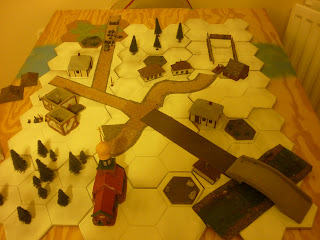 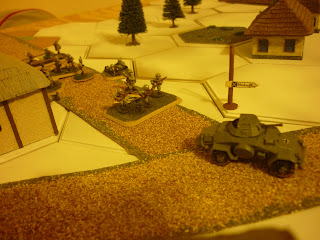 Italians enter with 5 men in the lead and Sgt Gunesto
Suddenly the column started taking fire from several buildings on their right.  Most of the squad fell to the ground and would not move.   The AC started to return fire while the Lt and Sgt Gunesto tried to rally the squad.  Lt Scapolini sent one LMG into a nearby building with Cpl Tarento.
Then the Italian spear blunted!  The lead Italian group of 5 sustained 2 KIAs and the last 3 fled into the woods while the MG in the german AC broke.   The Lt took the remaining assault soldiers and LMG and led them around the building in an attempt to outflank the partisans. 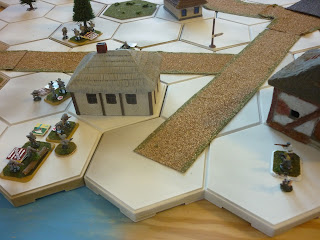 Scapolini is met by partisans 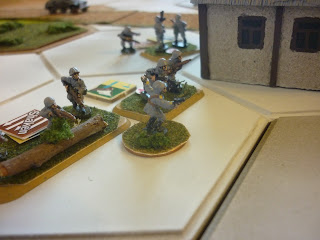 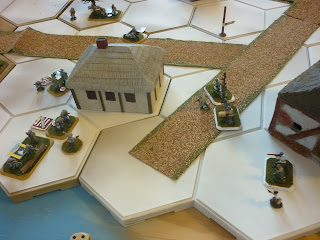 Cpl Tarento retreats from the house and
the partisans move up 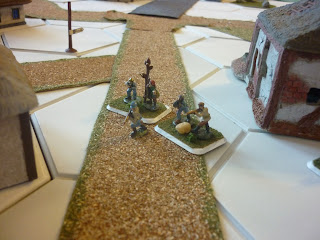 Partisans smell blood
With his LMGs retreated Lt Scapolini can not advance against the partisans and he pulls back out of the town.  The squad sustains 2 KIA and 2 WIA.   He doesn't know but the partisans sustain no casualties.
Post battle  his report to the Captain stresses a well laid ambush against his forces by a large partisan force and the Captain buys it.   The squad is upset with Cpl Tarento and doesn't trust his leadership.  Their morale stays at -1.   He has a talk with Sgt Gunesto and says if both NCOs don't shape up next battle he will have them both removed.  He also meets Senior Mafusco, a man from the goverment ministry.  Lt Scapolini hope he will either be a ticket to wealth or a ticket to Rome.   We will see...
Fun battle that played fast due to the small forces involved.   For those of you that want to try it the enemy forces generated were:
2 partasan squads and 1 LMG.
3 grII leaders.
Enjoy
Joe﻿
﻿
﻿
﻿
Posted by FlightDoc at 1:52 PM No comments: