Hope everyone is staying safe and keeping calm.  I have been working horrendous hours (15) at the hospital since the outbreak in Virginia so gaming has been almost nonexistent.  I have tried to play 15-20 minutes a day just to unwind before going to bed.  I only worked half a day today ( 6) so I will post the game I played this week.    Please pray for all our patients, hospital workers and all the families affected.  With courage, faith and hope we will all weather this.

Warlord games posted about the battle of turtle gut inlet.  It was an interesting battle but really was more of a small boat boarding action.  I decided, what if the US ships went out into the bay and escorted the brig?  that would make an interesting battle.  So here is alternate history with ships that were there and this easily could have happened.

The British had blockaded the Deleware bay to prevent supplies from reaching Philidelphia which at the time was the busiest seaport in the colonies.  At the time there were only a few ships on station and these could not move up the deleware river due to sandbars.  We will ignore the 32 gun Orpheus and just use
6th rate 28 gun  HMS Liverpool     4L    30 HP     average crew
Sloop 14 gun HMS Kingfisher       2L    24 HP     crack crew

The colonies have commissioned the brig Nancy to bring back gunpowder and shot from the Caribbean.


Capt "father of the US navy" Barry is in the brig Lexington and is sailing out with the Reprisal to get the Nancy up river to Philadelphia.

In Black Captain there is a different between the 4 pounders of the Lexington and the 6 pounders of the Reprisal.  For Black Seas players that want a taste, roll a D6 for each hit from teh Lexington, on a "1" the hit is canceled.  Post Captain players should be able to make the ship cards reasonable easy. 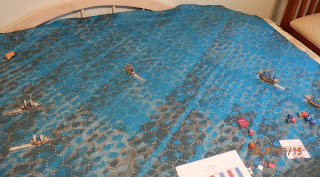 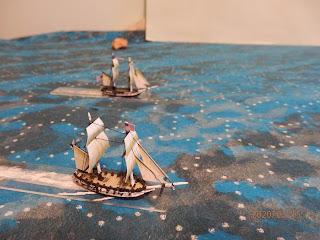 US running into the bay.  Capt Barry hoping they are not too late to save the revolution!  Lexington is far ship with streamer on main mast.  Ships by Warlord 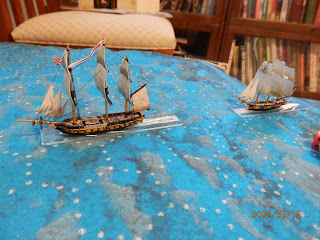 British Navy shutting down another rebel running the blockage.  Liverpool leading Kingfisher.  Liverpool by Warlord and Kingfisher by Hagen.  British are at full sail. 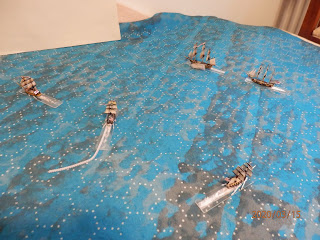 Nancy beats towards teh river at easy sail.  Barry realizes he doesn't need to defeat the British, just delay them by getting in their way.  So the Lexington turns to port and the Reprisal goes straight for a stern shot 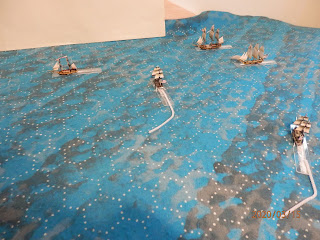 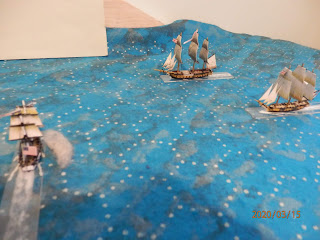 Though at long range for the Lexington, Barry fires at the Kingfisher's full sails.  He gets exceedingly lucky and scores a critical that takes down the topmast!  [ Black Captain playtest criticals] This will set the Kingfisher back. 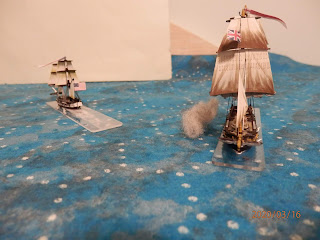 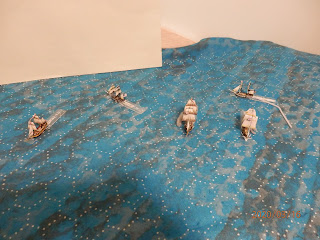 As you can see the Nancy is making good progress.  The Reprisal and Kingfisher have traded shots with the Kingfisher getting the worst of it.  Due to sail damage the Kingfisher is forced to battle sails. 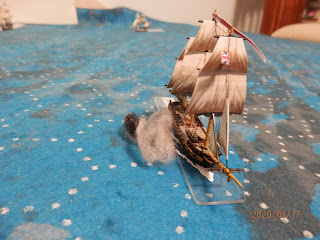 The Liverpool finally gets a shot at the Nancy.   Several holes in her sails but nothing substantial at this range. 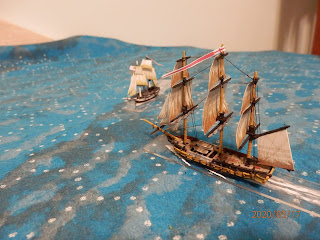 The plucky Lexington coming in close! 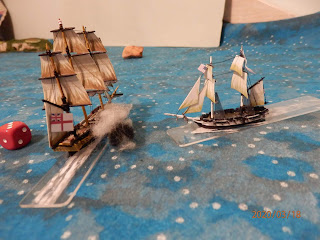 Even with a bow rake at 100 yards she survives with moderate damage. 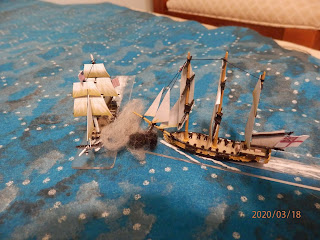 The USS Reprisal during a bow rake gets tangled in the sheets with the Kingfisher!  Being impetuous colonials, and because I wanted to try out the boarding rules for Black Captain, the US decides to board!    British marines stand at the ready and the battle starts to rage.  [ I used melee rules from Black Seas and morale rules from Post Captain.] 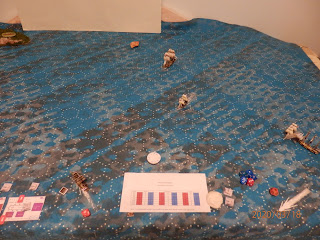 Upper left corner is the beginning of the Deleware river with a battery of 6 pounders.  Liverpool cant enter.  If she goes past the rock upper center she must test every turn to see if she hits a sandbar.   Nancy bottom left.  Lexington center.  Liverpool upper center.   Reprisal/kingfisher locked in melee right. 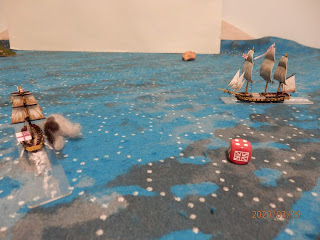 The HMS Liverpool rushes forward for one last attack on the Nancy before she makes the river.  Nancy fires at her attacker's rigging hoping for a critical; alas it is not to be.

After 9 minutes of furious combat the colonials are soundly defeated by the larger british crew.  The British Commander Graeme suggested that the new ship be renamed the HMS Repentance but this was rejected by the Admiralty. 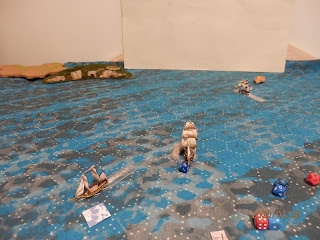 The HMS Liverpool, not wishing to chance the water any further takes one last shot at the Nancy and was the damage was moderate, she continued sailing towards the Delaware river.


Fun game that took forever only because of my schedule.   It was a tactical british victory as they captured the Reprisal but an operational defeat as the Nancy got through.    The rules seemed to work well and the scenario was fun.  The change I would make would be to have the wind blowing from down to up on the pictures so that all ships would start out running.   This would have give the british a better chance of catching up with the Nancy. 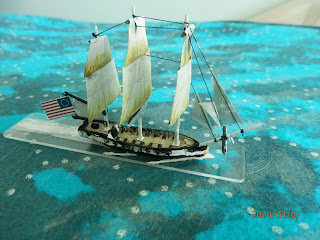 Picture of one more Hagen Miniature.   They are nice ships for the money when paired with Warlord flags.

Hello.  Been a busy 2 weeks here.  Went to NYC for 3 days and had a great time.  Took the train so had time to finally write down cohesively Flotilla Forward.  Done with the first 2 parts including the scenarios.  There will be 4 basic scenarios with variations to each one; convoy intercept, sea sweep, rescue and landing party.  Am just writing up the in game charts and post game charts.   Hope to be done with the first draft within 2 weeks. 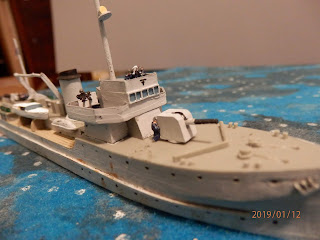 Should be seeing this baby in Flotilla Forward by summer!

Second update is Mr A over on TMP asked how I converted Post Captain to hexes.    Easy; each hex is 50 yards so it is easy to read the charts from there.  For fouling and musket fire adjacent hexes are considered 25 yards.  For turning I use the spines of the hexes as well.    I love hexes as I never have to stop and measure anything!     Lastly movement needs to be converted to hexes.  Here is the chart broken down by phases. 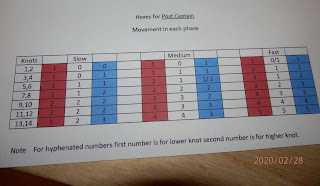 Hopefully that is easy enough to read.  Any questions just ask.

Lastly my variant for Post Captain ( which I changed to Black Captain as one of you suggested) is going very well.  I have fine tuned the cannons so a 9 lb is different than a 12 lb and have worked on incorporating sail damage better.    Stay tuned for this one.

Couple of pictures from the great lakes 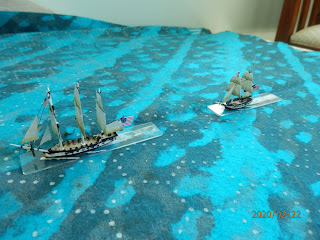 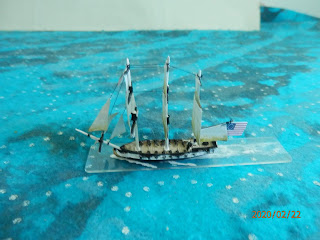 One of my Hagen miniatures painted up.   Looks great at a great price! 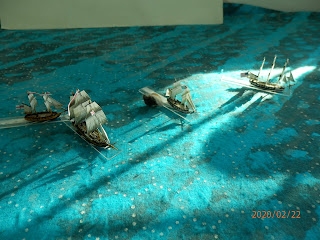 That is all for now.

Posted by FlightDoc at 2:24 PM No comments: