I have always thought Post Captain was an excellent ruleset; I still do.  I bought into the 1/700 scale ships of Black Seas and bought the rules as well.  With many modifications, Cruel Seas ( a la Crueler Seas) is my go to rules for coastal actions so I figured Black Seas was worth a try.
Black Seas is way too simple for my taste but a decent set of rules for a starter set.  See my review of them on  Oct 27 2019   As I stated there I was intrigued by the 1 hit point value for each ship encompassing hull, crew and rigging.   Could I somehow incorporate that combat routine into Post Captain?  I was sick in bed for 2 days this week and that gave me plenty of time to work out the math and expand the critical hit tables to do just that.  The rigging and speed loss is tricky and I am still not sure I have it right.     So last night a ran a single ship engagement to test out the new rules.  This is 70% straight Post Captain and 30% me converting the damage routine of Black Seas.  I call the fusion Post Seas.

I rolled up an encounter between 2 brigs on Lake Ontario, the USS Onedia and the HMS Earl of Moria.

USS Oneida is 16 gun brig with 24 pdr cannonades  and 2 9 pdrs on swivels .     As was suggested on TMP 3 guns earns 1 die in Black Seas so the charts in Post Captain work quite well.  Here is her card. 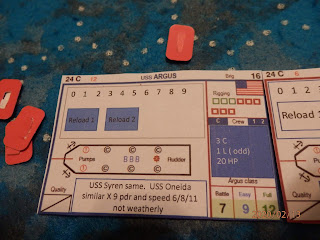 The Earl has a colorful history and was manned by Canadians.  This is her refit with 24pdr cannonades.  She only has 6 on a side but is a 1 knot faster than her amernican opponent and is weatherly.  Thus she will generate only 2 D10s per broadside but be a little more nimble.  In Black Seas these sailing characteristics would be lost.  To make this even more interesting I roll up both crew per Post Captain and get a Crack Canadian crew and an Average US crew.  { I had to roll a 10 on the US die!} 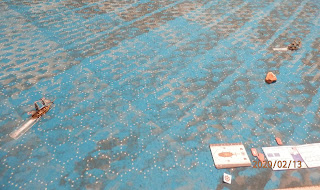 Starting positions with a fresh breeze.   The rock is a rock and ships must test for grounding within 200 yards of it.  [ I have converted Post Captain to hexes years ago though I also use the spines.  Each hex is 50 yards.]  Enemy sighted!        The Canadians with their crack crew and full of beer go to full sail to catch the americans. 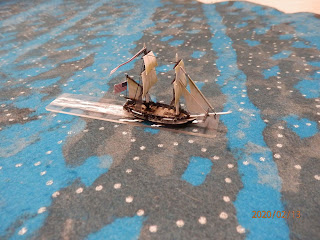 The US with the 9 Cannon and board elect to tack; not a sure think with an average crew but it works. The Earl, attempts to slow and take down sail but not before the Oneida unleases a broadside at 250 yards.  Significant but not dangerous damage is done. 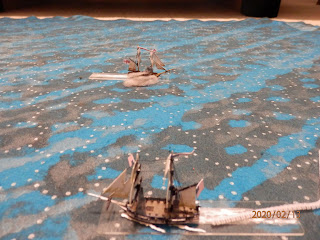 1 Minute later, now at battle sail, the Earl responds with her own broadside.  Despite her crack crew, little damage is done to the Oneida. 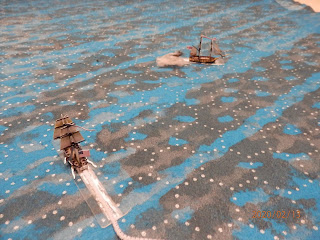 Risking grounding on the rocks the Oneida turns to close.  The Earl, unloaded and with fewer guns per broadside, declines a circling battle. 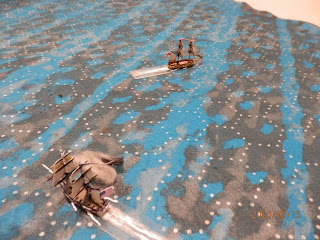 Before the Earl can turn to port the Oneida unleashes another broadside at 300 yards. 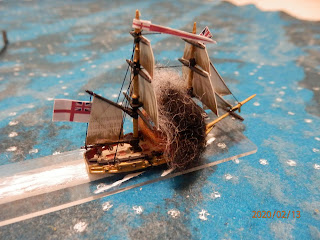 This time the accumulative damage is significant. [ down to 1/2 hps]   With several sails sprung her speed is decreased by 2knts.  Worse a fire starts!

The crack crew quickly puts out the fire but the ship is clearly damaged.  At this point in PC you make a command check which the Earl's captain passes with ease.    Still, his ship now has no speed advantage, is outgunned and is down to 8 hps verses the Oneida's 17. 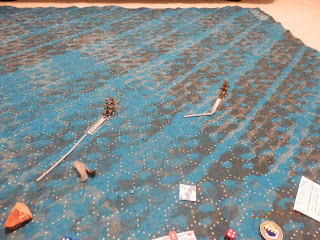 As Styx says, Come sail away.
Thus begins a chase.

Post Captain has a great chase sequence that includes little gusts and eddies.

.  I also give a crack crew a modifier as they would be getting the most out of their ship and the weather.
I give the USS Oneida 6 minutes of chase to see how things stand... 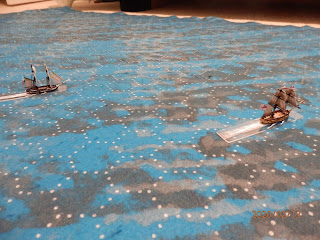 In that time she manages to loose 150 yards!  Clearly they will not be catching the Earl today.

Great game that was fun and tense throughout.  The fusion seemed to work well though still need to tweak the speed loss through sail damage.    I did like that the game played faster [ whole thing played out in 80 minutes including set up and pictures] but still had strategy and sailing flavor of Post Captain.    Will see where this goes. 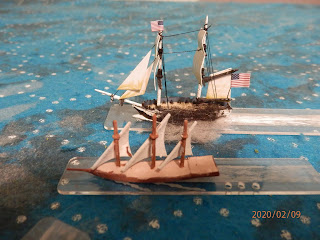 Just a picture of a Xebec I got off the internet for some Barbary Coast action.