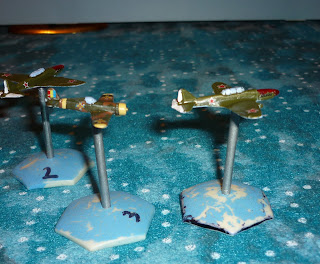 Capt Sandru making ace!!
Apologize for the lack of posting. A bussiness trip; real life and working of 2 projects for BTH 2 have kept me from playing any real games of late. Both projects should be in the Lardies summer special. The first is LAAF; simple anti aircraft rules for BTH 2. I have gotten some great help on this from Dan Nelson. The second is Bragging the Hun. It is more detailed damage tables for BTH 2 so you too can brag about your exploits back at the squadron bar! Ran 4 playtests this weekend including a particularly exciting one. 9 SBDs against 2 Tone class cruisers and 2 Japanese DDs. 1 SBD shot down by flak ( as expected) 6 of 8 SBDs hit their targets ( higher than expected but I am not messing with the to hit tables) First cruiser had a fire start/ 50% damage and had a 5 in turret destroyed. Fire burned out of control and gutted the ship. Had to be towed home! Second cruiser had bad flooding and heavy casualties. Flooding took a while to control and cruiser ended up limping home towing the first cruiser. Not bad for 8 SBDs!
Only real battle I have played was with my IAR -80 sq. Capt Sandru did make ace by downing 2 IL-2s while 6 IARs were flying CAP over a german TB and 3 Mine sweepers that had just delievered supplies in the Black Sea. They were attacked by 10 IL-2s escorted by 3 Yak-1s. Cpl Forscu was killed. Only one bomb struck home on the torpedo boat doing some minor damage. Flak scored no kills.
Next weekend I hope to have time to either play a russian front battle or a BTH2 battle with some corsairs I am currently painting up.
Till then thank you
Joe
Posted by FlightDoc at 7:16 PM