A beer factory in Africa.

Have managed to get in a couple of games this month.  Am fine tuning the leadership rules for Combat Patrol and must say, Buck did a great job.  These are now my go to tactical rules.  I wanted to see if they could handle modern combat.  Buck published a free supplement about a civil war in the UK during the 80s.  There was enough info in there that I thought it would work.
But first, my parents visited and my Dad and I tried out Combat Patrol in room to room fighting.  It worked very well! 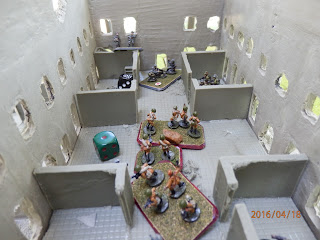 The russians are in!!  ( Now I will have to paint the inside of the building too.)

Now back to my modern game.  I did not run Platoon Forward with this. The Central African Republic 1996:  French forces are sent into the country to protect europeans and their interests.  Unpaid soldiers of the president start to loot.  They drive out to a beer factory, take it over and proceed to loot the beer.  Now I dont have french foreign legion troops ( but I will now have to get some) and I only had 16 africans so my taliban had to pitch in.  I must thank Mr Richards for providing this scenario taken from the Society of Twentieth Century Gamers; Issue 69 from 2010. 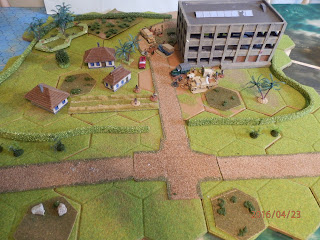 The factory manger and his family are in one of the villas on the left.  The beer factory is the big building on the right!  The hedge is actually a chain link fence.  French enter from the bottom. 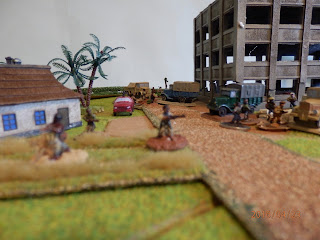 3 sentries out front while the rest of the folks load/drink beer.  ( they were moving so it blurred the picture.) 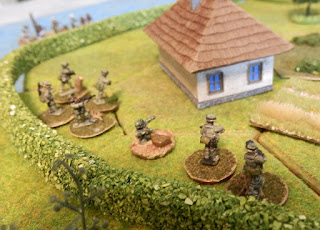 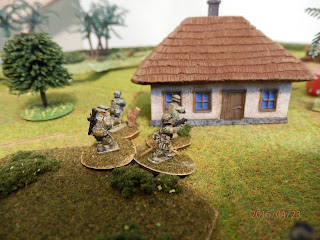 They move quickly to search the houses.  ( Historically there were no guards on the hostages.  They tried to stay out of the way.) 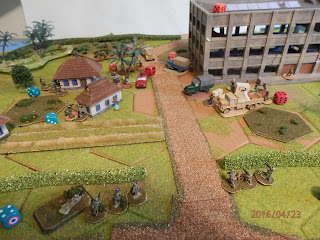 The covering squad starts to lay down fire. 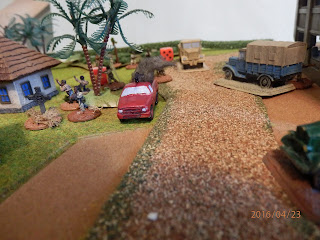 The technical only gets one shot off before it explodes!  ( I guess it wasn't light beer) 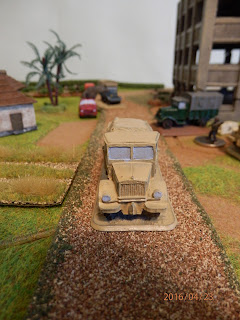 The first truck tries to make its way out to freedom! 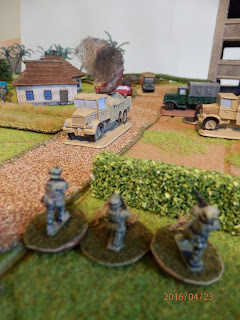 A LCPL halts it

Meanwhile the manager's family is located and sent to the rear with the LT. 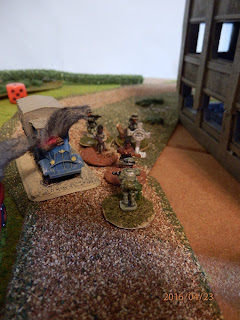 The rest of the team moves forward, blowing up another truck and capturing two prisoners. 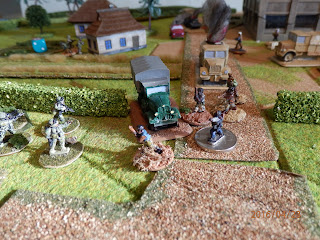 The last mobile truck makes a break for it; this time covered by some troops.  ( Sorry I hadn't based my leader yet.  That has now been corrected.) 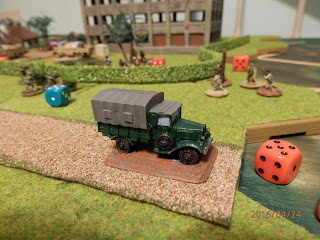 Freedom and free beer for 1 truck and 12 Africans.

The FFL had one incapacitated who lived but was evacuated to France.

The game played great and it really represented an elite force against a small one.  The Gr III leaders were able to +1 to their die and any rabble without a leader was automatically a 1.  ( Remember my normal deck has 3 "6s" and only 1 "1" card.  In addition I added several blue cards to only be used by the legion.   Guess I will be buying some FFL troops from Peter Pig.  They can also double in Viet Nam.

Posted by FlightDoc at 6:49 PM