Finally painted up a watch tower I bought from Peter Pig over a year ago.  I have always liked Martin's stuff as it is good quality for a fair price.  It can be challenging for a skirmish gamer because if I need 1 bazooka man I have to buy a pack of 8 so I normally get my weapon teams elsewhere.  But for bulk forces and leaders ( if skirmish games have "bulk forces") his stuff is good and he is my go to for infantry.  ( I confess I like Flashpoint for Vietnam as well.)
I think my modeling/painting skills are getting better over time so I tried to trick the tower out.  I added a MG and a tin roof.  The roof is removable to get at the figures.  It is obviously made with cardboard and toothpicks.   I was pretty chuffed with myself.
So to try out the tower I needed a base attack. Force on force has some neat rules for night fighting and rules specific to the vietnam war.  For instance VC function as if they have night vision googles because they are familiar with the terrain and constantly train for night fighting. Thus when I play you really are desperate to get some type of illumination up over your free world troops to help level the playing field.   After all, Charlie owns the night.
IV corp 1969.
A main road through the province has a key bridge that is protected by a small station of regional forces.  The local Viet Cong are going to blow the bridge and conduct a spoiling attack on the compound to cover the activity of the sappers.  Their secondary goals are to destroy the bunker,  flagpole and guard tower.  There is a US marine base not far with 105s on call and QRF available. 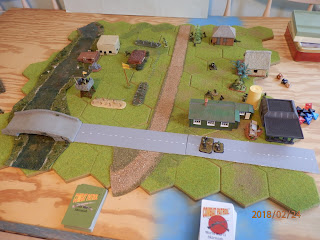 The bridge, station and local environs at night.  VC set up.  ARVN can attempt to spot 3 hexes away as per FoF rules.  Sapper team coming down main road.  VC have two assault teams that will attempt to infiltrate both corners off the secondary road.   There is 2 man security patrol patrolling around perimeter of base for ARVN. 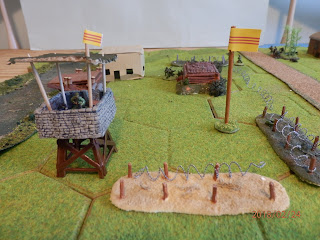 The ARVN station.  My watch tower on the left.  Ironically, the figure in the tower is a Resistant Rooster Japanese soldier painted as ARVN with a soft cap.  Flagpole made from a coffee stirrer. 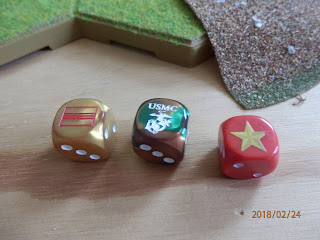 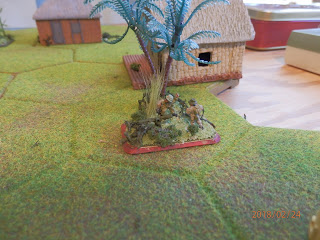 75mm on overwatch waiting for ARVN to react!   They don't.

The South Vietnamese fail all their spotting rolls so the VC slip into camp. 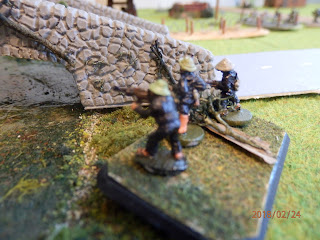 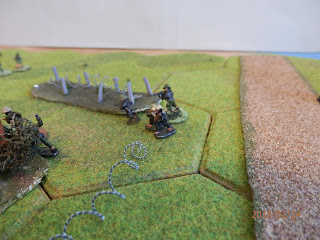 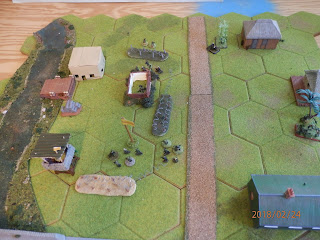 The scene when Arvn finally sounds the alarm.  The patrol at top sees team two in the wire and fires shots.  The guard in the tower shouts a warning but doesn't release his flare before he is pinned down.
The VC move swiftly.  1 man tackles the flag pole while team one rushes to the tower base. 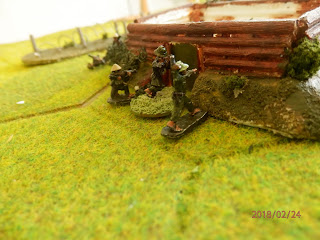 Team two storms the bunker!  The 2 man Bar team fight valiantly but they are quickly overwhelmed.

As bad as the ARVN spotting rolls were the VC set charges roll now become.  In the excitement it becomes much harder to do than in practice!
The ARVN officer gets illumination rounds overhead and accurate fire erupts from the blockhouse. A competent NCO (Gr II) leads a 4 man team out towards the tower. 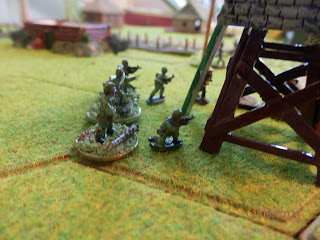 The NCO leads his team and they actually push team one back when the VC moral fails.  ( Go figure I played ARVN 6/6 and VC 6/8) 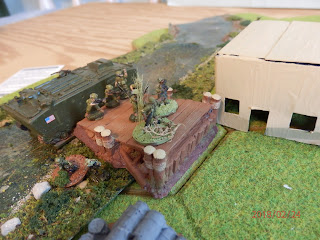 US marines arrive.  Even though a LCpl is shot dead jumping to the ground their fire is accurate and deadly.
With the sappers done at the bridge Charlie realizes it is time to go home and they pull back. 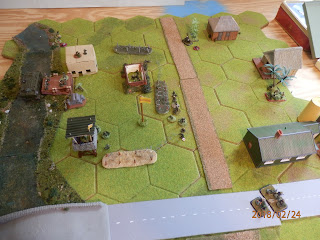 The withdraw is sped up at the VC keep failing their morale checks.    The bridge blows 10 minutes later!

Fun game with very few casualties.  ARVN lost only 4 KIA, US 1, VC 6.  VC scored 5 points for the bridge plus 2 for the bunker with 7 total for the win.  ARVN picked up 2 a piece for the tower and flag.  In retrospect I either need to have the bridge better guarded with a standing sentry or reduce it's points.  I think I will put a light at both ends and a 2 man team.