I have really wanted some Russian MO-4 boats for cruel seas.  The rules talk about them but they have no models.  Heroic and Ros have some ( technically BMO-s) so ordered them at the beginning of the year and after 6 weeks and the cost of 10 pounds for postage they arrived.  They are 4 pounds a piece so I guess that will be an average price and of course no "free" postage to the US.
The models are nice but not quite as detailed as most of the Warlord stuff.  There is no crew or mast and certainly no flags.  Then again, for the smaller boats Warlord doesn't give you any crew or flags either.  The russian boats are nice and fully functional.  I am glad I bought them. 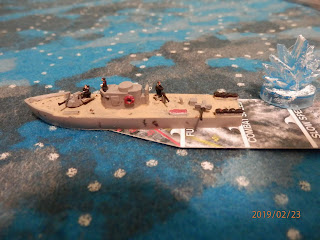 A russian BMO boat with crew.  Still need to add mast and flag.

I also ordered several crew from H+R. 6 figures for under a pound.  These are 3 different poses and each is individually based.  Very impressive and superior to the warlord crews.  The problem for us in the US is postage will keep us from ordering any crew.  For readers in the UK I think this is a great option. 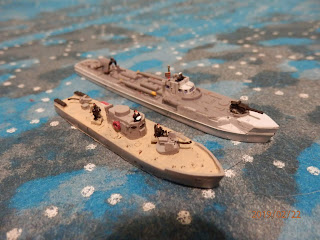 So I wanted to get these ships on the water.  I also wanted to start testing out some rules for Tumultuous Seas.   Crueler Seas are my optional rules aimed at Warlord's target audience.  Casual players that want a quick balanced game with some history thrown in.  I sent Crueler Seas to Warlord and the inital response was enthusiastic but I guess John was less enthused.  So Crueler Seas is now off to Wargames Illustrated; we will see.   Tumultuous Seas will be aimed more at the Naval enthusiast. It should have formations, ship turning, air rules ect.

And now back to the Black Sea.  In my reading there was actually a lot of action in the Black Sea between small boats.  Both sides were trying to support the flanks of their armies on the northern shore.  In addition, a fair amount of Romanian oil went down to the Mediterranean through the Black Sea. A number of scenarios here and you will see the Romanian Navy make an appearance on these pages as well.

In 1942 the Germans surrounded Sevastopol and the Navy and Air Force was ordered to blockade the port.  This was because the Germans were close to capturing the city in 1941 but without Naval support the Russians were able to move men and supplies freely and keep the city open.  In response 8 S-boats and 4 MAS boats moved into the Black Sea...

Lt Z See Schmidt strained against the night to see anything moving.  Every couple days the russians tried to move men and supplies into the city.  The luftwaffe had been doing a good job during the day so the Kreigsmarine had to keep up the pressure at night.  That was his mission tonight.

He had 2 boats with him, all average crews, in a line ahead formation. 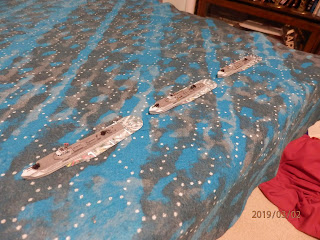 S-boats on the Black Sea.  Each hex 5cm or 100 yards.  For game purposes boat located in the bow hex. 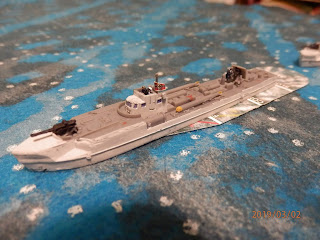 Lt's Schmidt's boat.  ( I am slowly trying to go back and pimp my boats out with crew and flags.) 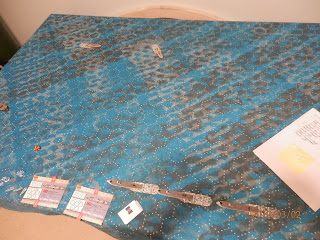 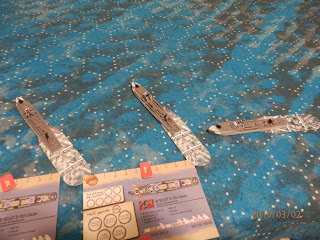 Schmidt signals "simultaneous turn to starboard and advance at combat speed."  Unfortunately Backmann misses the signal due to a random event.  Schmidt sighs, " He was never that bright!" 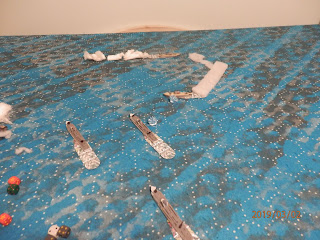 The battle is joined as Backmann struggles to catch up.  " Why are the russians making smoke?" Schmidt orders "retain formation but fire at will." 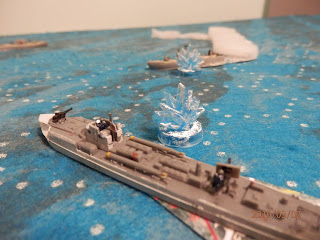 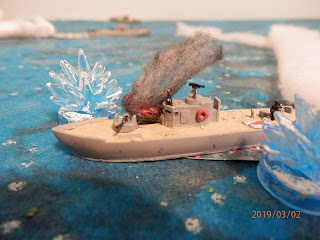 Schmidt's fire is effective and starts a fire on the MO.  It slows down as he passes. 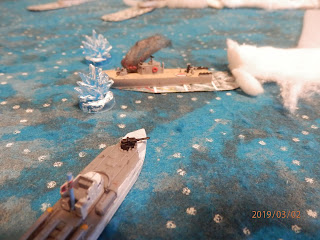 Bachmann narrowly misses the burning Russian ship as he flashes by. 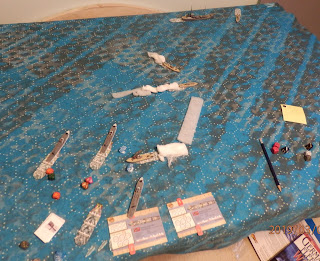 More Russian MO-4s show up laying smoke.  "what are they hiding?" 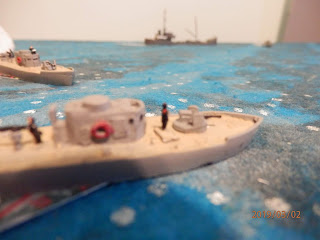 A russian sailor looks at the tanker they are protecting on the way to the beleaguered port. 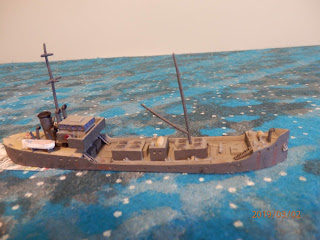 There she is; what a beauty!  I don't have a Russian flag yet. 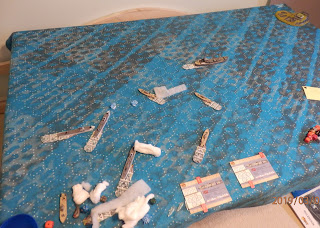 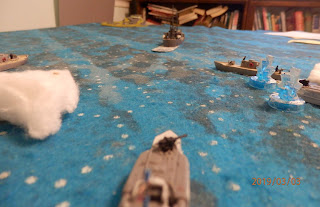 Finally Schmidt sees the tanker.  " I know what they have been screening!", he cries.  He orders Bachmann to full throttle to swing to starboard hoping there is time for one torpedo shot. 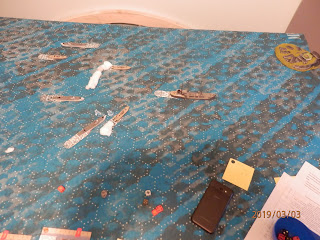 Everyone's position at time of Schmidt's sighting.  Schmidt center left.  Backmann just below.  The third boat is upper left and is retirering secondary to damage being over 66%.

Bachmann jumps out at full speed hoping to get an angle to take out the tanker and erase his earlier error.  As he cuts in front of a russian boat both 45mm guns hit starting a fire. 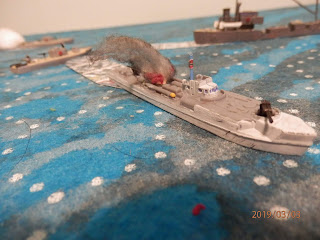 To make matters worse, as he slows down to fight the flames a 3 inch gun from the port finds his flaming boat in the dark and soon he has to send an SOS to Lt Schmidt.  Crew casualties are high.  ( another type of critical hit.) 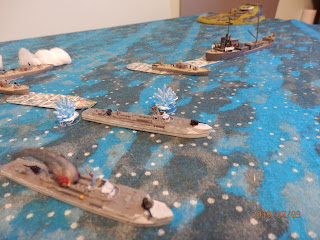 Lt Schmidt has a tough decision to make as 3 inch shells try to find his boat.   Try a low odds shot at the tanker and accomplish the mission or try to rescue Lt Backmann and his crew.  There is a enough fuel in that tanker to kill a lot of germans but Backmann and his crew in a Russian POW cage? ( if they are lucky!).............? 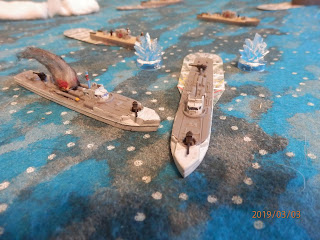 He decides to attempt a rescue.   Amazingly the 3 inch gun falls silent.  ( It jammed. Another critical hit result in Crueler Seas.) Backmann and the crew scramble aboard though 2 KIA are left on the sinking craft.      The Petty officer hits the throttle and they all speed away!

Great mission that took an unexpected turn!     Tactically a tie as both sides lost 1 boat with 1 boat severely damaged but operationally the Germans lost as the tanker made it through.
For those of you that want to try out the MO-4 here are the stats I used.
1 45mm fore and 1 aft.    -1 from the damage roll as these guns had poor muzzle velocity.
1 HMG port and 1 starboard.
Size small
45 hit points  ( well compartmentalized)   Speed slow 8 knots  combat 16 knots  full 24 knots

I have also started on revising the aircraft rules.    Here are 2 pictures. 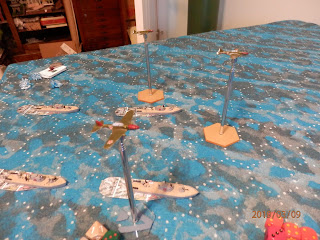 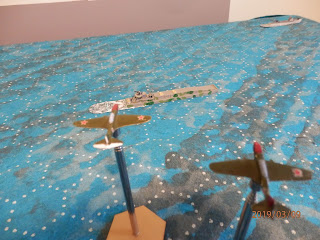 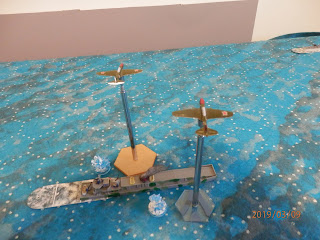