Is Blood Red Skies DIF with a Board and Minis?

Greetings all.   Not much time for playing games during playoff baseball season here in the US.  Despite the short season and tournament style ending it is still baseball so I enjoyed it.

I think many people know I have been buying Warlord ships as of late.  I enjoy Cruel Seas ( with my crueler seas modifications of course) and I love their sailing ships.  I tried their Black Seas but have gone back to Post Captain.  So I looked at Blood Red Skies.  I am happy with Bag the Hun ( with my mods) and my Raiden miniatures but it never hurts to explore, right?  So I downloaded and read the quickstart rules.  { companies-- this is a great idea.  50% of the rules I have purchased started out as free downloads.}

What struck me was how similar in concept the game was to Down in Flames (DIF) by Dan Verssen.  For those unfamiliar with DIF it is a card game where planes are in one of 3 states to each other, neutral, advantaged or tailing; sound familar?  It is actually a great game if somewhat abstract and I did a lot of writing about it 20 years ago for GMT games on the original version of the game.  GMT even honored me by naming one of the wingman cards "Legan" after me.   The new version is here:

This got me thinking, could I morph DIFs into a board game with minis?  Don't get me wrong, I enjoy BTH and was a playtester for the rules.  Still DIF is a great game and I differentiated every model of P-51 in it... 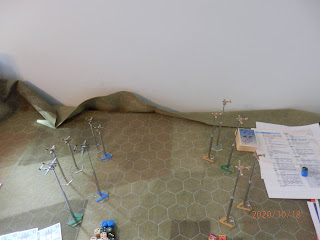 Americans and Italians meet over Tunisia in my first playtest.

My thought was to break the board into areas and use the performance/horsepower ratings from DIF to make hands and determine positions.   Then use Speed differentials for full throttle markers.  I would use my adjusted Firepower ratings  and the combat routine from BTH with my critical hits table from the Too Fat Lardy special. 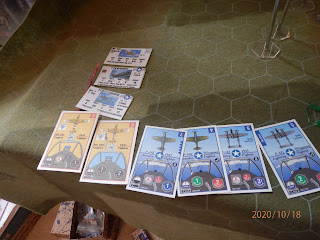 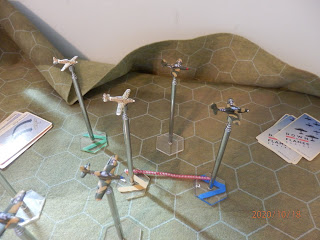 The planes...   Here a Macchi gets on the tail of an Airacobra. 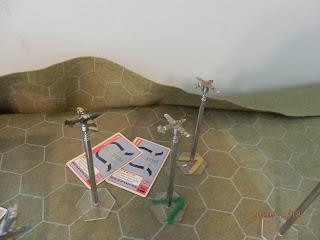 Here an Airacobra maneuvers around a Macchi. 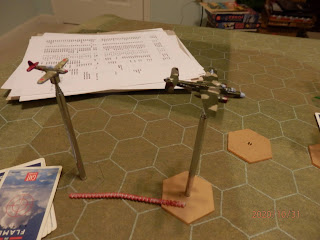 After several playtests I believe this is going to work!  I have dropped the number of areas to "battle" and "entry/exit" for planes trying to escape.  There is still a level of abstraction but it is slightly less than DIF.   Combat is much better than DIF as there is no "number counting".  Every shot is potentially fatal.  My casualty rates haven't been any higher than BTH.  For a 4v4 dogfight I will normally have 1-2 planes shot down with 1-2 damaged.    It plays faster than BTH and takes less space.  I can play a 4v4 dogfight in 30 minutes. 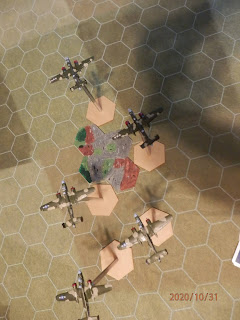 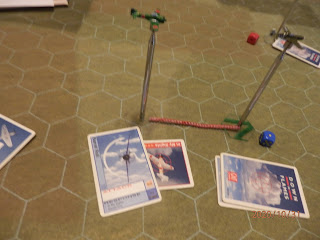 So I don't know is Blood Red Skies is DIF with minis but it gave me a great idea that seems to be working out so far.  More to come...

Posted by FlightDoc at 4:52 PM