We move to a different platoon and a different war. I have had 5 battles with this platoon in the past. The platoon leader Lt Jaroze has been heroic to say the least; his bronze star was denied but he reciently took over the company. His replacement, Lt McSwain was chastized by the battalion commander (LtCol Patterson) last battle for moving too slow. Now he is determined not to repeat this mistake!
THE PLATOON:
Lt John McSwain optomistic Gr II leader
SSgt Davis shy cautious Gr III leader Dynamic leader card
Cpl Lawrence gambler; greedy Gr II leader
Sgt Colton cunning Gr I leader

John's heart sank as Lt Jaroze briefed the operation. His platoon was the blocking platoon again! When would Patterson give him a chance to show what he and his men could do?
Sgt Colton's spirits soared as the LT told them that they would be a blocking force for the operation. How lucky could they get? Credit for combat without having to advance against the enemy! The company was to assault a gook hill and all 1st platoon ahd to do was sit back and prevent the Charlie from slipping past them.
3 hours later they were in the bonnies and the radio crackled. 3rd platoon had run into heavy resistance. Lt Jaroze was going to change them to the blocking force and 1st platoon was now the hammer. Mission: advance and clear hill 421 while enemy was engaged with 3rd platoon. 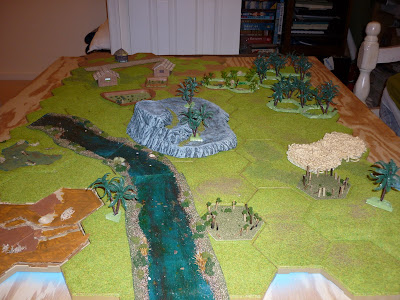 Map looking from 1st platoon's entrance towards
hill 421. 3rd platoon is off board towards the right

McSwain's plan was 2 squads forward and 1 back. He chose SSgt Davis to lead with the river to his left flanked in echelon with Lawrance. He would hold Colton back with him. Jaroze promised him 105 support and the hill errupted in flame and they started off. 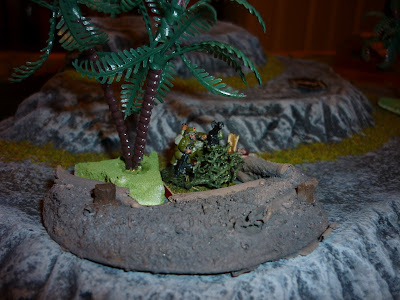 All was great until 1st platoon was withing 60 yards of hill 421. Suddenly a HMG opened up from the hill and a trench line was discovered. 1st poured fire on the HMG while Lawrence moved 2nd squad up to deal with the trench. 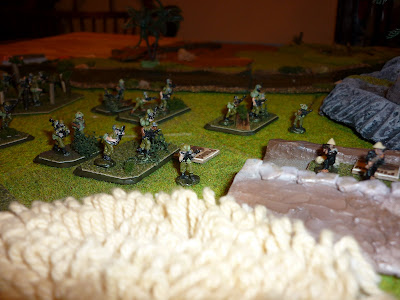 Attack meets resistance. SSgt Davis above and Cpl Lawrence below
start to deal with the VC 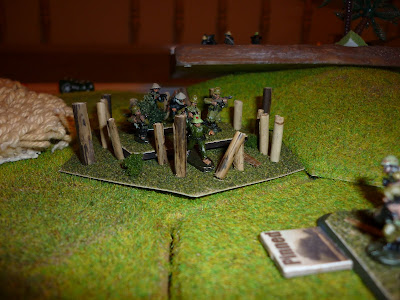 Suddenly on Cpl Lawrence's right a heavily armed VC
squad moves through the bamboo to hit his flank! 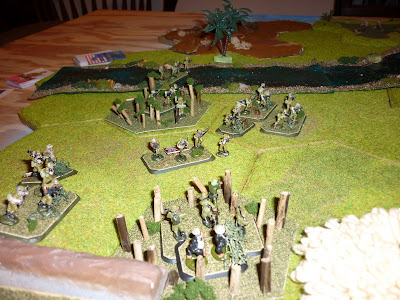 Cpl Lawrence moves his MG 60 to the right to flank the
VC attack. Lt McSwain comes over to steady the squad
SSgt Davis succeds in silencing the HMG. Cpl Lawrence is holding his own. McSwain orders SSgt Davis into the trenches and Sgt Colton to advance onto the hill. After some supressive fire
Davis leads 1st squad into the trenches. 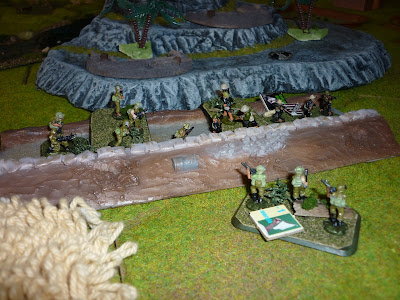 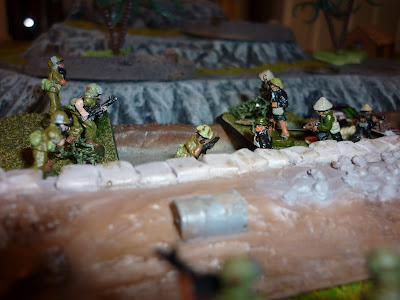 Fighting is furious as Davis leads from the front!
1st squad succceds in clearing the trench. With their back broken, the VC break off contact. Sgt Colton's less than aggressive pursuit allows a 60mm mortar team to escape but no platoon leadership is aware as Davis is in the trench and McSwain and Lawrance are still catching up from beating off the VC couterattack on the right flank! Platoon sustained 1 KIA and 2 WIA. 5 VC bodies found with numerious blood trails leading from the trench and bamboo field.
3 days later Lt Jaroze calls Lt McSwain into the CP. Upon arrival Lt McSwain is introduced to Lt Alan who wears armor corps insignia. "John, Lt Alan needs our help right away..." [ hint: I just painted up a patton tank.]
Forces:
3 US infantry squads plus 2 MG 60s
2 stonks of 105 artillary pre game plus 2 more available in game by McSwain.
VC
1 HMG 1 60mm mortar
2 VC squads plus 1 LMG ( for play balance I would change this to 1 VC squad and 1 NVA squad) this battle was a little easy for the platoon.
1 LT gr II leader 2 Sgts gr I leaders ( for play balance upgrade 1 Sgt to grade II)
All VC forces start dug in and must be facing the direction of 3rd platoon off board.
Special rule
the americans have 1 M60 MG off board on the right to represent 3rd platoon. It can fire from any part of the board edge using normal line of sight rules for your game system each turn.
There will be no posts for 2-3 weeks as I will be participating in a homeland defense excercise for most of this month.
Thanks
Joe