Note: This is the 4th battle I have played with this platoon. They have lost every battle and their Lt was killed last time. 2 of the sections now have poor morale and the Sgt Major's cousin, Cpl Scottie McNab leads the 3rd section. McNab is a poor leader but the Sgt Major can't see this.

" Rubbish Sgt Major! I don't believe in bad luck units; only poorly led ones." Maj "Balls" Forester ended the conversation with his chief enlisted man. As his company ground on towards Catania in Sicily he vowed to look for an opportunity to personally lead this platoon and see what they were made of.
4 days later they were tasked with providing reconassance of a villa and mountain that lay astride the battalion's route of advance. Villa Lardia was known throughout Sicily for making poor wine and selling it in america where, because it was imported, people would drink it. "Villa Lardia! When your friends don't know any better."
Maj Forester would do his own reconassance and take 2nd and 3rd sections of the platoon with him. 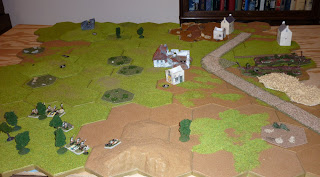 Map of battle field from british positions. Villa in center
Moutain with ruin in back left corner. Vinyards to the right
Black markers are positions that must be scouted (9)
Maj Forester's plan was simple. He would place his 2in mortar in the woods. 3rd section would move towards the villa. (McNab could handle it) He would lead 2nd section towards the hill on the left. They did not need to take the positions, just scout them. 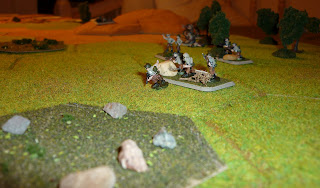 Cpl Barns immediatly drew MMG fire from the villa but managed to push through. The bren section with Maj Forester however was shaken and 1 man was killed. 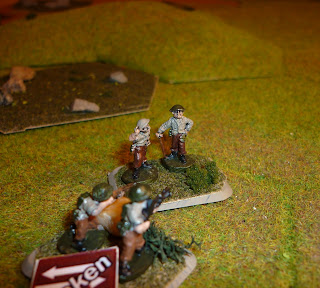 As Bullets crack around him Maj Forester leans
on his walking stick and decries Italian marksmanship!
The 2in mortar neutralizes the MMG and the Major gets his troops moving again. 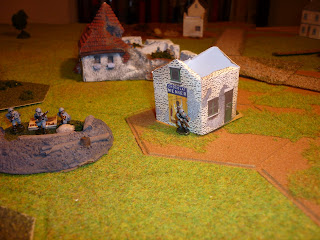 Italian positions in front of the villa
2nd section is stopped cold in front of the villa by a squad of Italian infantry
Maj Forester and Cpl Barnes move to the left and due to the vagaries of the die find both the hill and the mountain empty of axis troops! Some long range LMG fire from the village tells Forester that the Italians are in the villiage in force but he has accomplished his mission so leads 2nd section back without loss thanks to some smoke from the 2in mortar. " Well Sgt Major, I hope this proves my point!"
After the patrol 2nd section's morale improves back to normal. (3rd section's does not as they are still stuck with McNab) Sgt Major introduces his cousin to Sgt McGregore who commands a MMG section. McGregore states he can swing it so he will be able to support McNab in his next mission.
Interesting "battle" and makes you think because the object is not to fight but to look. With my hidden forces system there was a 7.5% chance that the Italians would leave that flank uncovered. Maj Forester guessed great pre battle. He did miss the SPG hidden in the depression at the top of the board covering the road however. It was tense getting 2nd section up to the mountain.
FORCES:
British
2 sections
1 2in mortar
1 3in mortar off board on call with map coordinates to the villa and the ruin on the mountain
Italians
1 MMG
Italian squads are organized differently. They ended up with half a platoon which consists of 2 LMG teams (organized as a section) Gr II leader and 10 riflemen (organized as a section) Gr II leader
1 SPG ( I used a Semovonti 90mm because Sicily was about the only place they were used in combat. Unfortunatly it was never spotted so it never fired!)
Victory
The Italian forces are placed under a total of 9 blinds. The British have to spot at least 5 blinds for a win and 7 blinds for a major win. They obviously can't loose too many men as this is recon only.
Thanks

Posted by FlightDoc at 6:22 PM