The Admiralty wasn't as impressed

Wanted to try out my naval rules with some fast moving small boats. Haven't started Flottila Forward campaign rules or solitaire rules yet but am kicking some ideas around. Do have a random events chart done. Am also continuing to edit Platoon Forward with Richard. We are a third of the way done!

English Channel November 1940 (Not sure if this is too historical but I had the ships on hand!)

Commander O'Toole looked at the measly forces on hand and sighed. At least his protests had allowed the addition of a Fairmile B launch. His mission was to escort several coasters (mainly coal) up north. As there were only 6 freighters a large escort was not thought neccessary. And besides, he was told, the Jerry DDs had sortied receintly and would not try that again.
Forces
HMS Clover (Flag) Flower class Frigate
HMS Onyx Algerine Class Fleet Mine Sweeper
HMS Lady Lillian ASW Trawler
ML 475 Fairmile B Launch
6 Coastal Freighters speed 10 knots
Visability 3 miles 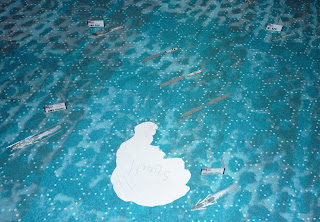 Initial British Formation
Each hex is 500 yards
Around midnight Lady Lillian radioed she had sighted an E-boat off to port and was engaging. As was pre arranged, the motor launch and Clover turned towards the port side of the convoy to support and look for more E-boats 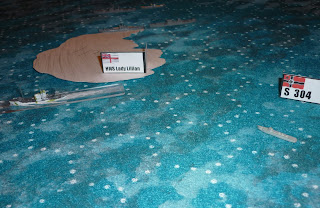 Lady L first to fight!
Lady L's second shot starts a fire on the E-boat. It turns and starts a retreat. She will spend the next 15 minutes trying to sink it to no avail.
Where are the other E-boats? The Fairmile runs into them south of the convoy and opens fire. Clover is still trying to join the battle and Cmdr O'Toole is seeing just how slow 15 knots can be! The Mine Sweeper, sure that a second attack is not looming, reverses course to join the battle. 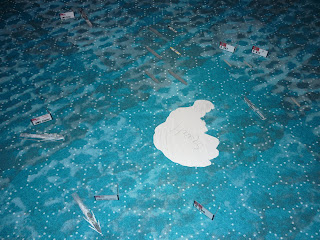 12:10AM The E-boats sight the convoy
The 3 remaining E-boats increase speed away from the Fairmile to reverse course in order to begin a torpedo run on the convoy. The Fairmile starts laying down a smoke screen. 1 E-boat (under fire) fires long at 3k yards and misses. The others break to port of the smoke screen. 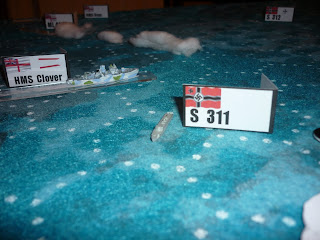 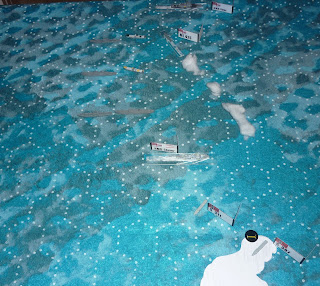 E-Boats break left of smoke screen and
loop towards freighters
Cmdr O'Toole was astonished to find an E-Boat barreling out of the smoke screen and cut across the bow of the Clover. By the time the pom poms started firing it was half a mile away. He had thought they were still back with the Fairmile. He quickly turned the Clover around to place his ship between the E-boats and the freighters. He could see the E-boats as they were moving at 30knots but apparently they were having trouble seeing the freighters through the thickening haze. [ 2 random events had decreased visability to 2 miles] 1 E-boat fired torpedoes and missed. The second could not seem to line up a shot. It was probably due to fire from the Clover. Just as he seemed to give up, he turned towards the Clover and fired two torpedoes at the HMS Clover! 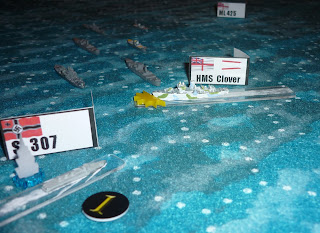 2 Torpedoes fire at the HMS Clover from 1,000 yrds
O'Toole screamed hard to port but a ship at 15 knots does not turn like a spitfire. One torpedo slammed home as Cmdr O'Toole was thrown towards the ceiling and then to the floor. It took just over an hour for the HMS Clover to sink beneath the cold waters of the channel.
Two weeks later Cmdr O'Toole recieved a letter from one of the freighter captains thanking him for breaking up the E-boat attack. The Admiralty, however, wasn't as impressed.
Losses
1 Flower class Corvette sunk
1 E-boat out for 1 week after a fire
1 E-boat with minor splinter damage and 4 casualties
Loads of fun and should work with any coastal set of rules!
Enjoy
Joe

Posted by FlightDoc at 6:14 PM