Felt like playing a battle in Normandy so using my 101st airborne unit. This is only their 3rd battle.

Lt Ramsey showed up at the Colonel's CP wide awake. He had actually slept for 5 hours. That was the most he had slept since the invasion 5 days earlier. There was an older frenchman in the battered room who stood too straight to be a simple farmer.
"Joe, glad you are here. As you know we are ready to break out of the beachhead. We want to use this route here as it is paved and good for tanks. Unfortunatley, retired Major Jean Claude here says there is a Chateau along it crawling with Krauts. That would be nice information to know before we start down the road." The frenchman spoke, (with an outrageous french accent) Colonel, it iz true. I know what I saw. Several tanks and large guns overlooking the road. You will be wiped out!"
"Joe, take a squad plus a bazooka and have a look. If there is little resistance take the place but don't play hero. Find out what is there and come back and let me know. Major Jean here will show you the way.

What is your plan LT? 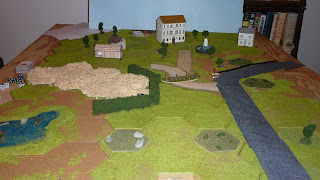 Chateau du Pupon
Lt Ramsey's plan was to go down the left flank through the fields to the barn. From there either enter the main house or climb the hill depending on resistance. The Major offered to lead with his men so Joe let him. He reminded the Major that they were not to start shooting; theirs was recon!
Things went surprising well as they made it through the field without a shot fired. The Major pointed smugly through the bocage at a tank in front of the main house. Nuts! 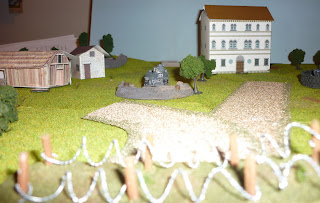 German tank in the way.
(Yes it is a Char-bis. Command
Decision tanks come 3 to a pack
and I had one left over so...)
Joe decided to let the partisans watch the house and he would send a team around the barn to the hill for a better look. As SSgt Taylor started off MG fire from the hill pinned him down. "Guess the party has started now" Joe thought to himself. The Bar layed suppressive fire on the MG, SSgt Taylor moved his men into the barn and Lt Ramsey brought up his bazooka. The tank meanwhile had started firing on the BAR team. 5 German soldiers came out of the main house and headed for the barn. 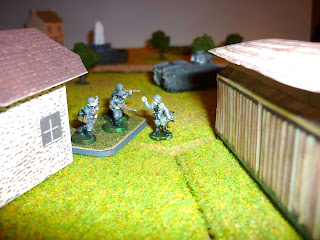 German soldiers advance towards the barn
The germans were able to drive the americans out of the barn. (The americans were trying to avoid casualties) After a bazooka round missed the tank backed up but continued to shell the americans. 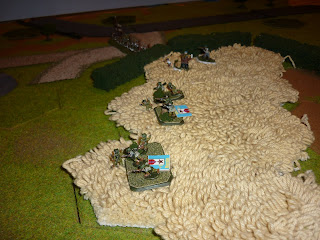 Franco-American positions in the field
Joe now knew the Major was right. There were alot of Jerrys here. He decided he could not take the complex and felt he would take casualties in occupying the MG nest on the hill. He had seen all but the far side of the compound. He asked the Major if he would run to the far side and take a look while his boys keep Jerry's head down. The Major agreed. 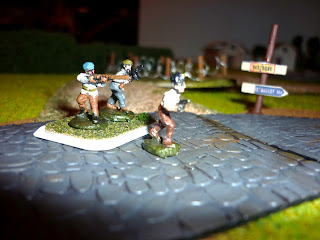 Major Jean Claude's dash across the road
The Major dashed acrossed the road. Signaled he had his info and all allied forces withdrew.
Back at the CP Lt Ramsey was able to report there was a large french tank, a MG on the hill and at least 2 squads in the chateau. More important to him; he had not lost a man. The Colonel turned to the beaming Frenchman, "Well Major, guess I owe you an apology. Maybe you Frogs are okay afterall!"
Fun and short battle. The write up doesn't do it justice. Since you don't know the forces arrayed against you there is a fair amount of tension. As we entered the field I thought we would get shot. As we came to the barn I thought we would get shot. When we ran towards the hill I thought we would get shot. (wait we did get shot then!)
The german forces ended up being: dug in where it makes sense
d6 1-2 second string 3-5 1st string 6 paratroopers ( I rolled a 3)
1 LMG with gr 2 leader
1 squad with gr III leader
1 half squad with company commander (didn't roll for him as he never came out)
1 tank and 1 ATG (Maj Jean Claude missed the ATG; oops)
Enjoy
Joe

Posted by FlightDoc at 6:32 PM