One of our planes is missing

I have not gotten a lot of questions on how to play Platoon Forward. That is a tribute to Rich Clark's editing skills. I am also hearing unanimously positive comments. Thank you. That also means I can turn to blogging about my next project while still teaching how to play Platoon Forward.
I have turned my attention to finishing up my expansion pack for asymetrical warfare entitled "Middle of NoWhere". This is an expansion to Platoon Forward focusing on partisan ( or freedom fighting) actions from the 1920s through Vietnam. While Platoon Forward can certainly be used to game these actions as is[ training excercise April 2010], this expansion changes the blinds tables, tweaks some encouter tables and add a bunch of new scenarios. One of the new types of missions is "rescue". A subset of "rescue" is a downed aircraft or helicopter. I swiped this title from a scenario by Max Maxwell in a TFL special. It was a cool scneario and title! I will only use the title in the pack if he says it's ok but for the blog I thought it fine. Hope you don't mind Max!

Today's platoon is my favorite. They started it all. This is my 8th battle. [ Please see Dawn Raid and training excercise found in April 2010} Sgt Bustamanti was just upgraded to Gr III and was moved to the second squad because morale there has dropped. In addition Cpl Fan has joined the platoon to replace Cpl Riccelo who was KIA last battle.

Sgt Bustamanti hurried into Capt Butro's office wondering where the fire was. Lt Chanti spoke first. "Buffo, One of our planes is missing. It was on a pacification patrol was struck by rifle fire and couldn't make it back to base. It crashed 15 minutes ago about 11 kilometers from here. I can't send Sgt Polti. Take your squad and find the pilot before the Wahlas do. For God's sake hurry! 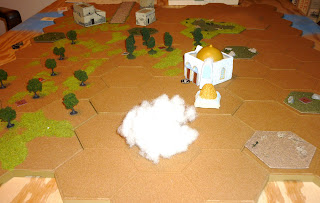 No I don't have a cool model of a crashed plane!
That is it in the white smoke
Buffo enters from top left 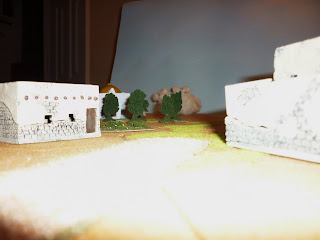 Buffo sees the plume of smoke past the mosque 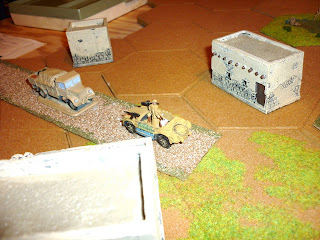 The Italians enter the board as all
the locals stay indoors

Several blinds start on the board but turn out to be shadows. The jeep stops at the treeline watching the mosque and the crashsite. Buffo jumps out of the truck yelling for the pilot. Hearing no answer he sends Cpl Fan left with the LMGs and he takes the assualt section right to go searching. 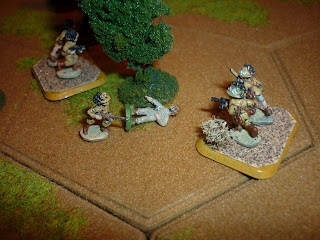 Cpl Fan finds the aviator. Just then the jeep starts to fire at a MG in some brush. Cpl Fan sends the flyboy back to talk with Buffo and takes his men forward through the trees to flank the MG.
Unfortunatley... 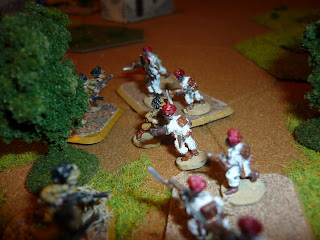 Cpl Fan runs into some rebels trying to
flank the Italians
In ferocious close quarters the casualties are even so Fan pulls back with 2 KIA and 2 WIA. Buffo dispatches 5 men back to the truck with the pilot and takes 5 to the LMGs. They lay down fire on the rebels which drives them back. Fire opens up from the mosque but the autocannon silences this quickly. As Buffo moves up his 10 Italians for an assualt, the rebels, with all there forces shaken and no pilot in their possesion, decided to leave the field. 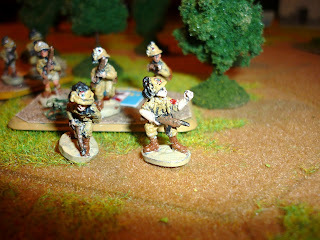 Our Hero!
I love this scenario! It has such a wide range of possibilities. Buffo was lucky that the rebel forces on board were not real therefore he found the pilot first with no bad guys around. He also found the pilot on the first try. In game event showed Cpl Fan ticked off Buffo so he must of been mad at Fan's inexperience of moving into the ambush. There is now friction between the two. My freeform event was to raise the morale of the LMG section to normal. Given how they performed I thought it unlikely and missed the roll. First fixed event was replacements with a +1 for winning this scenario, +1 becasue LtCol Aquino likes the platoon and -2 for heavy casulaties for 0 modifier. I rolled a 4 so no change. Second was player character effect. Character was Cpl Petracela and was a morale check of his LMG section. Petracela is cultured so no modifier there. A quick roll and morale of the squad goes up! Turns out they like his solid leadership.
Rebel forces
2 squads without LMGs 1 gr III leader 1 Gr I leader
1 MMG gr I leader
Enter near board edge turn 1
Enjoy
Joe

Posted by FlightDoc at 6:03 PM