Hope everyone is doing well. I have had the flu. I thought of starting another blog page so we could all share our Platoon Forward stories but not everyone could post on it. You will have to forgive me; I am not computer savvy. I think it is a great idea but don't know how to execute it.
Being sick allowed me to read "An Ace of the Eighth" by Bud Fortier. Very good book and got me fired up for Squadron Forward. So... sorry guys but I finished up the charts for Squadron Forward and wrote up the rest of the scenarios. Dice tested the charts and they work. Have come up with a neat way to figure out A/C postioning without needing blinds. All that is left is playtesting the scenarios, and then the part I hate-- writing it out. It has many similarities to Platoon Forward and still containts 3 parts but the focus is more on the individual. This feels right to me as air combat involved fewer people and, while leadership is important, it was more a test of skill.
So, as a preview, here is a test play of the CAP scenario using my P-38 "kicking mule" squadron.
Capt "Zap" McGrudger made yet another right turn. They had been circling the western part of the fleet for hours. His flight was protecting ships offloading supplies onto the island of Sicily. The squadron was inexperienced and Maj Bunker had given him 3 2Lts to give them seasoning. 1Lt Lewis had been pissed. He had been bucking to be an element leader since they arrived in Tunisia. Bunker let him lead occasionally, but honestly, no one in the squadron liked Lewis, he was a spoiled brat. Daddy was a bigwig in Detroit and he let everyone know it. It was too bad because he was a decent pilot. 2LT Carls was the element leader today. Though a 2LT Carls was the best pilot in the the squadron. He instictively knew how to fly. If he lived long enough to learn how to fight he would be an ace.
Needle flight
Capt Zap McGruder Foolhardy Wealth Average pilot
2Lt Glenn Schlick Cheap Wealth Average (lucky)
2Lt Chuck Carls Cheery Government Gifted pilot
2Lt Bill Wright Coarse Wealth Average Mustang
"Needle 1 this is thimble. Bogeys due west heading east at angles 7. " Zap turned his flight due west and dropped down to 10K feet. 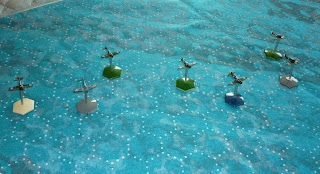 The bad guys. 4 on the right with bombs
green base is rookie/ grey is veteran/ blue is ace
Zap spotted 7 FW 190s and was trying to move his flight behind them when he was spotted while at there 9 o'clock. 3 190s turned toward him and 4 barrelled towards the ships. He told Carls to tie up the 3 and he would go for the bombers. 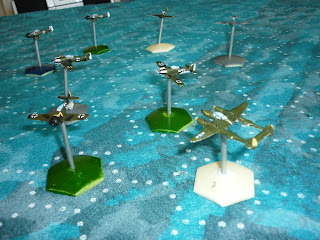 Zap's Charge!
A melee ensued but the 2 kicking mule wingman stayed with their leaders. Zap pulled up behind a bomb laden FW 190 and let her rip! 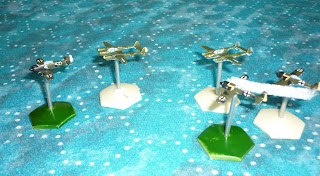 Zap Lets her Rip!
Multiple hits strike the German plane and it spins out of control. 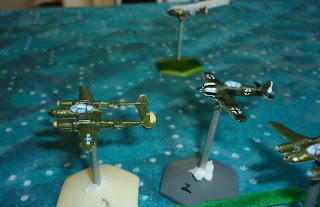 The hunter become the hunted!

Suddenly cannon shells tear into Zaps plane. He banks left and screams for Schlick to come to his aid. 2Lt Schlick, while lucky, is just an average pilot and moves to slow to save Zap. He has to hit the silk as his Lightening disintegrates around him. Fortunaltly a US DD sees him and he is not in the drink long.

2Lt Carls causes 1 bomber to eject his bomb but the Lightenings have no other successes on this day.

Meanwhile 2 FWs with bombs and 1 without race for the ships. 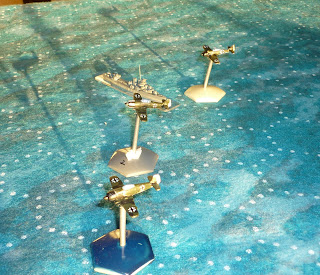 The FWs attack!
AA fire is ineffective as is the strafing attack against the american destroyer. However, the 2 expreienced german pilots find a merchant ship stopped and both their 500lb bombs hit. One enters the engine room doing severe damage and the ship itself sustains 50% damage. 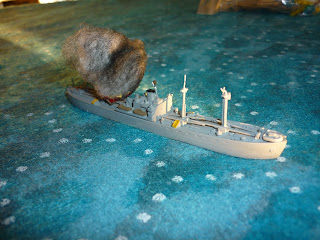 SS Lard Island after the attack

Post mission Zap is returned quickly to the squadron. His claim for a FW 190 is denigned. Turnes out the german aircraft recovered at 2K feet and went home! The squadron only damaged 2 for the loss of 1 plane and a merchant ship badly damaged. The kicking mules rep goes down by 1. In addition one of the P-38s will be out for 2 missions needing major maintanence.

Great fun! Think you guys will really like this. I sure do!

Enjoy the scenario (when playing the US gets 2 DDs and 1 large merchant. The merchant is stopped as it is unloading.)

Posted by FlightDoc at 5:51 PM