Apologize for the break between updates. Have been ill. First, there appears enough interest that I will be starting a mirror blog where YOU can post your stories, ideas and links about Platoon Forward. This is a natural evolution of publishing the product. Helping you guys enjoy your games. I would love to hear your feats of derring do as well as the occasional failure. Who doesn't love a good story?

Second, playtesting Squadron Forward continues on with good results. I have decided to add theater/year specific encouter tables for the scenarios. It is not that much more work as I need them when I play anyway. Will just have to make them more inclusive and formal.

One of the reasons Platoon Forward works for me as a campaign vehicle is that it is flexible enough that I can stick with it. I am not forced to play a scenario I don't want to just because it is next in line. An example is today's AAR.
I felt like a break from Squadron Forward and an idea hit me. "Why not use that cool Russian Church in a scenario?" Sounds good; what platoon to use? Haven't used the Greeks in a while? That sounds like fun; I could have it winter of 1940/41 with the Greeks on the offensive. A big attack? A patrol? I don't know. Why not roll up the scenario? That sounds good. Die rattles-- Platoon Attack; good I can make that work. Won't roll up the ojbective because it is going to be that cool Russian Church... [ Hey, it works for me! This is how 80% of my battles get generated]

This is my 7th scenario with my Greeks. As you play longer with the platoons they do develop personalities and subplots. This platoon has struggled with poor performance and the battalion XO has sniped at their efforts from time to time.

Lt Sposito shook the snow off his boots then entered the room. The Company Commander seemed genuienly happy to see him. " Sposito, tommorrow we go on the attack!" You will attack the small village to our front at dawn tommorrow to test the preparedness of our foes. 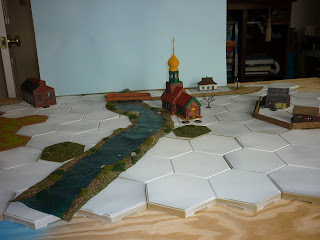 Looking towards the village
from greek lines
What is your plan Lt ? 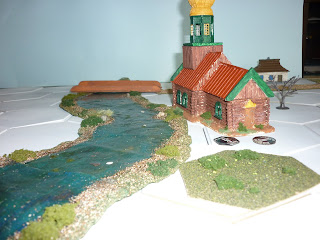 Cool Russian Church with A and B blind

With visability limited to 100 yards Sposito decided to creep up on the normally slack Italians. His best squad was 3rd squad and they would lead off on the right flank. He would use 2nd squad to demonstrate against the church in the center and he would bring 1st squad up personally behind 3rd squad to add weight to the right. The MMG would be postioned on a hill on the right just off picture to cover the attack. The compound on the right would be hit with mortars once firing started.

The Italians were more vigilant than Sposito had hoped and 2nd and 3rd squad soon were pinned down by automatic weapons fire from both the church and the farm complex on the right. "Where was the artillery promised?" [ poor card draws] Lt Sposito realized if he did nothing the atatck woudl fail and battalion would somehow blame him. He sent 1st around to the right and moved up to rally 3rd squad.

Attack on the farm
3rd sq center/ 1st on right
Lt Sposito in the Kelpi
1st squad reached the wall and traded shots with the Italians. Sposito knew with 1st squad's poor morale and Sgt Hellik's lack of leadership abilities they would not last long going toe to toe even with Italians. Then suddenly a roar overhead!! 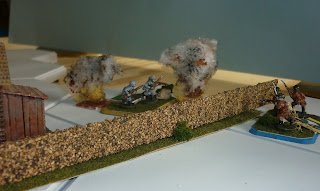 Mortar shells landed right in the midst of the Italians! This broke them and Sgt Hellik was able to sweep over the wall. [ the artillery was targeted for the adjacent building and scattered!] He then moved quickly into the building and just missed capturing a MMG.

As the Italians retreated to the barn Lt Sposito and 3rd squad moved up to the farm. However, the Italian Lt was not idle. He had gathered forces and advanced to the farm as well. 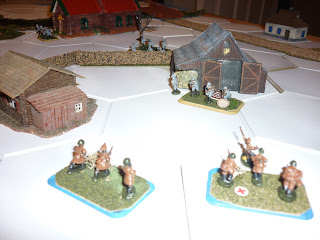 Sgt Basakidas at the farm
Italians massing along the far wall

After a fierce fight the Greeks prevailed and the Italians retreated to the Church. 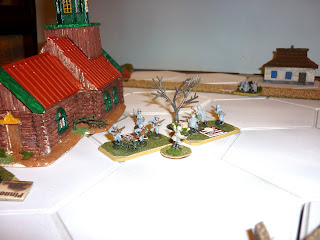 Italian Lt rallies the men at the church
Lt Sposito thought the battle was won but when he had his squads advance towards the church he found the Italians still had plenty of punch. As he debated what to do next, he saw the Italians slowly evacuating the church towards the far end of town! [ for those of you familiar with my esprit rules the Italians had reached their limit. ] Sgt Hellik, ever the hothead, wanted to charge immediately but Lt Sposito overrulled him fearing they could still lose the battle. They kept up fire until the last Italian had left. Lt Sposito realized at that moment this would not be an easy war for the Greeks to win.
Post battle 1st squad's moral improved to normal and Sgt Hellik lost his hesitant status. While the company commander accepted Lt Sposito's actions the battalion XO, must have spread rumors because when Lt Sposito met the battlion S-4 they did not hit it off.
The enemy forces generated where heavy:
2 squads, 1 HMG, 1 LMG 1 Lt Mtr 2 Gr II leaders and 1 Gr I leader Italian esprit level 14. Greeks have the same esprit level if using my tactical esprit rules.
Special rules visability starts at 100yards and improves by 20 yards every other turn.
1st Italian unit generated is alert. Every other Italian unit generated the 1st turn has a 50% chance of being alert. 2nd turn this increased to 75%. 3rd turn all units are alert.
Enjoy!
Joe

Posted by FlightDoc at 6:23 PM