The Colonel was furious! A FAAR AAR

Capt Selei felt good walking back from HQ. His SQ was one of the best in the Fortele Aeriene Regale Romana (FARR) with a reputation of 3. LtCol Ulsei, his group commander, had just told him that they were picked to escort the FARRs brand new HS 129s on their first combat mission. He felt a flight should be able to do it as enemy activity ahd not been heavy. He would give Lt Anca, his DO, the honors since he himself had just come off a mission early this morning. Lt Anca was not particulary liked as he was a braggart, but he could back it up as he was a good pilot and had already downed a P-39 in 3 weeks of combat.
Characters
Lt Anca Cocky/religous Mustang Veteran Flight lead
Adj Stag Encioiu Pragmatic Green wingman
SubLt Marulus Pessimistic/ The Arts gifted flyer Veteran Element lead
Adj Stag Manoliu Agressive Lucky Average wingman 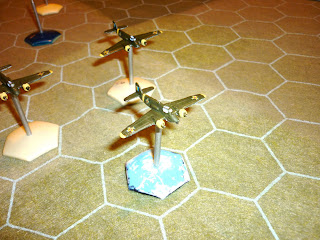 HS129s on loan to Romania because
the Germans were afraid they would
be used against Hungary
The weather was clear as the 4 ME 109Gs took off without incident. Shortly after climbout Adj Stg Manoliu radioed Lt Anca that his oxygen wasn't working. As combat rarely occured above 12K feet here in the east the Lt was tempted to keep Adj Stag Manoliu with the flight but flinally decided to send him home.
When the depleted flight got to the rendevious site there were no HS 129s!!!!! He loitered for severla minutes then proceeded along the mission course. Then he heard that the HS 129s were being attacked and his heart sank. How had he missed them?! He opened throttles and raced to the scene.
It wasn't pretty. 6 HS 129s against 5 P-39s and 2 LA -5FNs. 1 bomber had fallen and one had turned around, its pilot seriously wounded. The 3 Romanians charged in! 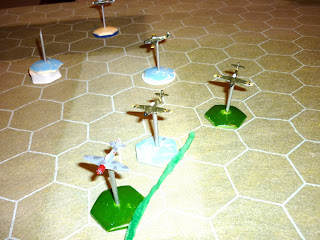 Lt Anca takes one down!
During the dogfight Lt Marulis managed to take 2 russian fighters down and a HS 129 claimed one as well. 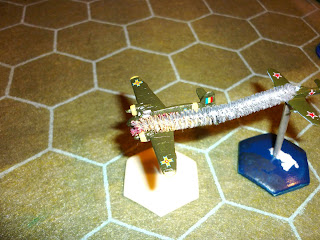 A P-39 ace strikes back!
Lt Anca also damaged one fighter but half of the 6 HS 129s were not present for the attack run on the russian armor. To add insult to injury one of the armored bombers was shot down by flak leaving 2 to drop bombs and strafe. 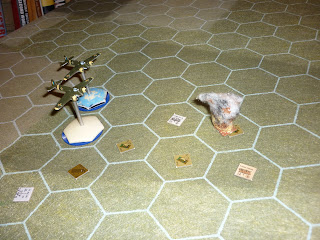 One russinan tank blows up. From this angle only my beautifully
painted miniatures look like cardboard counters!

All bombs missed and the strafing was less impressive than I hoped. 1 tank damaged and 1 destroyed.

While Capt Selei was disappointed in the loss of the HS 129s he was happy that 3 ME 109s took on 7 USSR fighters and destroyed 3 and damaged 1 without loss. The SQ rep did drop by 1. Adj Stag Encioiu developed a sinus infection and will miss 3 missions. [He has flown 2 missions and it takes at least 4 before you can roll to loose your green status.]
LtCol Ulsei was furious!! He comes from a military family and does not like Lt Anca anyway. He brushed aside the fighter victories and stated that the mission was to protect the brand new HS 129s and to destroy the russian tanks. "Captain, you should have gone on the mission and not left it to a prior enlisted man. You have a good squadron. A leader must lead and pick good leaders like Florescu to lead as well." [ Lt Florescu comes from a military family as well. His dad served with LtCol Ulsei's dad in the great war. Lt Florescu also happens to be the leading scorer in the sq with 3 so it is not a bad suggestion. ]
So Capt do you replace your Director of Operations? Will that mollify your group commander?

Great battle. In retrospect I should have sent 6 fighers on the mission but I don't think it would have helped. We missed the join up [ 10% chance] no matter how many planes we had.
Hopefully this gives you a flavor of Squadron Forward.
For the Air to Ground I used my Brag the Hun rules found in the summer 10 Lardie special. Like all my stuff these are not ruleset specific. Use your to hit sequence and these will tell you about the damage.