The only thing predictable about me is the unpredicatability in what I want to play next. This week it was back to Middle of NoWhere. I am painting up some CR-42s and Italian Ju-87 though. I would also like to thank Chris and Laffe for their excellent posts at PlatoonForwardStories. They are both interesting tales and I look forward to hearing more.

Am working on a dawn raid scneario so I thought it was ready for playtesting. Rather than Ethiopia or Vietnam I wanted to see if the system would work for partisan warfare in WW II.
Needed to roll up a platoon. As some of you know I am partial to Italians having lived in Italy for 2 years.
Lt Scapolini Cunning / Avarice Gr II
Sgt Musculin Foolish/ Alcohol Gr II 1st squad
Cpl Zern Pragmatic/ Hedonism Gr I
Sgt Gunesto Unsupportive /Religion Gr I 2nd squad
Cpl Tarentino Cheap / position Gr I
So, how to interpret the men above? As their story unfolds they will develop character but Platoon Forward gives us some basics now. The Lt is obviously a greedy SOB who will steal anyone blind yet he is very clever. He has some leadership ability on the battlefield. I suspect he was transfered to the "Middle of NoWhere" because he was caught with his hand in a cookie jar somewhere back in the world. Sgt Musculin is too trusting and fond of the bottle. When sober he knows tactics and his men will follow him. His ASL, Cpl Zern, is almost the opposite. His pragmatism has him learning tactics from his Sgt and following him on the battle field. Yet in the barracks I wonder if he takes advantage of his NCO's trusting nature?

2nd squad is led by a rigid Catholic who feels all his men will be damned if they don't follow the true faith by the book. He is unsupportive of any deviation and thus unpopular with the men and his platoon leader. His ASL sees what is happening in the squad but will not make waves as he is worried about making the next stripe. If the political climate changes he would gladly help the squad if it would help him...
Anyway, that is how I interpret the above. With a little imagination you can get alot out of 10 words!

The Capitano called the platoon leaders into his office. "Gentlemen, we have them now. We know where the battalion leader "Rango" is hiding. [Rango fought in the SCW] He is in these hills. We will hit them with a hammer and anvil at dawn tomorrow. Lt Scapolini, your platoon will be the hammer. Move fast to capture Rango alive. If you can't drive him south towards our other platoon. You will have an amored car in support. Questions?" Lt Scapolini was not going to drive anyone anywhere. He would capture Rango! With that on his record all past indiscresions would be forgiven and he would be reassigned to Roma. What is your plan LT?

The hills are alive...

Scapolini would send the AC down the road with 1st squad while he went with second squad through the field in a pincer movement hoping to get Rango in the middle. He stressed to his men that speed was critical. 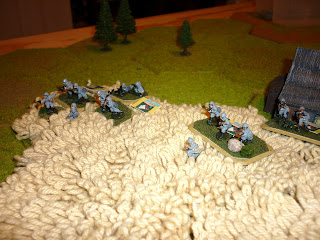 Some sentries fired but were quickly driven off as both squads approached the hills. Then on the left, 1st squad ran into some dug in partisans with an ATR. One round bounced off the armored car and Sgt Musculin could not believe his eyes. The armored car started backing down the road! He ran over the the AC and questioned the commander's manhood. That did the trick. 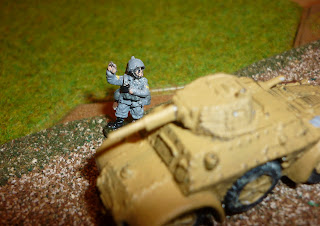 Sgt Musculin and the armored car 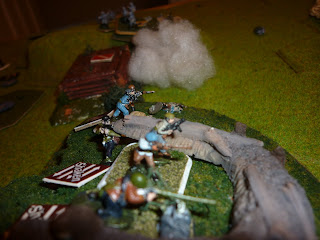 Rebels on the left flank

2 LMGs and the AC laid down fire while Sgt Musculin worked his way around the flank of the hill. Meanwhile, Lt Scapolini had run into a bunker with a MMG. This cost him 5 men and Sgt Gunesto WIA. "No time for a bunker." He ordered smoke and bypassed the bunker looking for Rango. 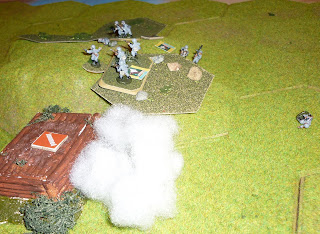 Sgt Musculin finally makes it onto the left most hill. 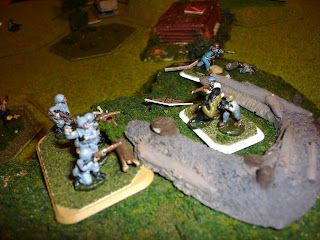 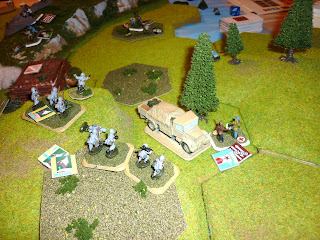 Lt Scapolini finds a truck in the woods
Could it be that Rango rides in style?

The itialian LMGs fire into the woods and momentarily supress the partisans. Before Lt Scapolini can get down into the valley they have rallied and the truck drives off southward. He sees Roma farther away than ever. It doesn't matter that his platoon has scattered the partisans and they retreat in poor order or his platoon has sustained only 7 casualties. Rango was so close! Or was he?
The Capitano tells Lt Scapolini he is quite pleased with his platoon's performance. Turns out Rango was not there having been delayed in route. There had been a large food cache however that was captured thanks in part to Scapolini's platoon!
[ I would have used a wagon instead of a truck if I had one. Time to buy something else I think.]

Joe
Posted by FlightDoc at 5:53 PM