Since moving to England I have become interesested in the Viking Invasion of Great Britain.  I actually stepped out of my comfort zone ( WW II ) and purchased some Dark Age figures.  I wanted some skirmish rules.  I finally settled on SAGA from Gripping Beast as they seemed to have character even if they seemed a bit gamey for my ususal taste.  [ I am completely historical non gimicy type of gamer.  Doesn't have to be complicated but I don't like rules to force my actions.  I am also big on Command and Control.  Hence my affinity for TFL products but even here I slightly modify all their rule sets; usually streamlining. ]

I finally had enough figures for a very small skirmish which I played twice.  So I thought I would report the story and give you my impressions of the rules.  I apologize to my WW II readers who only want that.  I hope to get a desert platoon Forward battle in this weekend.  STOP READING NOW.

Olveg loved bacon.  He particularly loved Welsh bacon.  He had his friends had been going over to the neighboring farms and stealing pigs for several weeks now.  It was easier than raising them yourself.  He and four of his friends decided to go and grab some today.  What he didn't realize that was that the Welsh farmers did not appreciate it and decided it had to stop.

SAGA had 3 classes of warriors that are elite, good and peasants.  Their fighting abilities and armor are tied to their classes.  Those of you with the game can see I uncoupled the armor  from their classes.  As a soliaire gamer I don't have to worry about points but it does have a points system.  As written, elites appear very, very good and peasants appear to be used to wear down your opponent. It appears this is easily modified however. 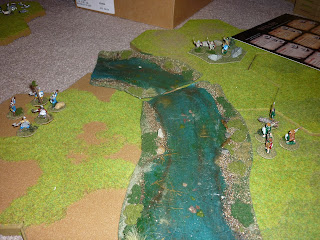 Olveg preparing to cross the river and teach
these cowardly Welsh a lession!

Activation is done by rolling SAGA dice as players take their turn in sequence.   These are special dice that you do not need at all.  The game is easily played without them.  [That said as a dice junkie I will probably buy some as I think it will add period flavor.  Afterall, you could also play the game without miniatures!]  You earn dice and then roll them.  You then allocate dice to activate units and to use nation specific abilities.  For example if you roll well the vikings can add 1 to their armor class against missle attacks.   Some of these are neat but some appear gamey to my tastes.  As an example, the vikings may also eliminate 3 of their warriors and gain 3 attack die per figure.  It is apparant that dice management is an important aspect of play.  Since the dice are not hidden from the other player this is not a big hinderence to the solitaire player.  I suspect the battle boards that are used with the dice are finely tuned to give an even game.  Since I am a solitaire player that is not a high priority for me and I will be modifying the battle boards to downplay the gamey factors.

Olveg appraoched the ford and roared at the  four Welshmen to stand down.   He was met by a rain of javilins!  The first time 3 of his compatriots were cut down!!  The second time one of his friends was taken by surprise as javelins also appeared from his left and entered his side.

Combat in SAGA is elegantly simple.   You roll against the armor class with a D6.  Your opponent gets a saving D6.  If he fails your warrior is down for the count.   Except for the danish axe and cross bow there is not weapon differenciation.  If I knew more about dark age combat this would bother me.  Right now it does not.

With his friend bleeding from his side, Olveg charged across the ford prepared to make the farmers pay! 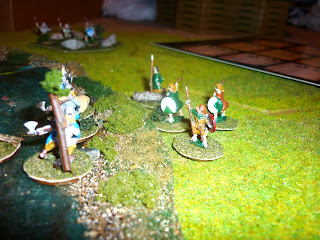 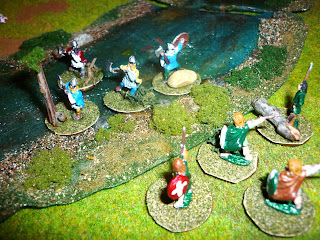 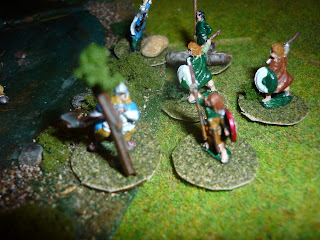 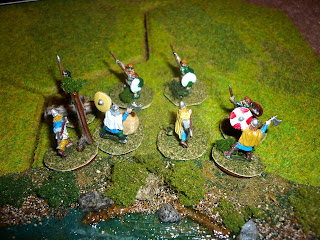 Iron rang against iron, wood and bone.  Two Welshmen payed the ultimate price but one Viking went to his maker.  These men did not fight like farmers and Olveg was suspecting a set up.  The 2 warriors scampered towards the rocks.
﻿Olveg hesitated.  He had 3 men against an unknown number of Welsh in the rocks.  But his friend was dead, this was a test game and he wanted bacon!

After any unit melees it gains Fatigue.  If a unit moves more than once it gains fatgue.  Fatgue decreases a units effectiveness if an opponenet wants to use it.  Alternatively, it can be accumulated and when it reaches a certainly level the unit becomes exhausted.  I believe this is a subtle mechanic that I have not fully explored yet but I love the concept.  There is no morale per say in SAGA.  I thought I would want it but in a heroic game such as this the jury is still out. 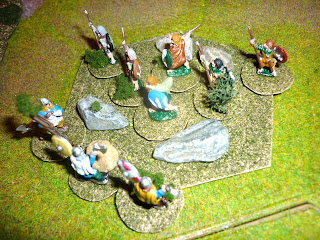 Olveg ambushed amoung the rocks!!﻿

Olveg attacked the Welsh but they threw ambush with their SAGA dice.  A bit gamey but here it worked with the storyline.  He could have not attacked but then the game would have ended, where is the fun in that!

As Olveg followed the Welsh fighters into the rocks they were jumped from above!!!  6 against 3.   Now they were fighting for their very lives.   His friends were cut down but not before they each took one of the tough Welsh with them.  Olveg escaped the rocks and made it back to the river for the final showdown. 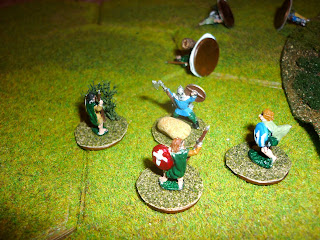 ﻿Bring it you pansies!!!

﻿The epic battle swayed back and forth but the welsh fighters proved too tough for our bacon loving hero and he was cut down!

All in all a fun time that took 20 minutes each time.  The game is desgined to be played with at least 4 groups per side.  Anyone with the game that wants to play this sceanario I gave each side 3 SAGA dice.  The Vikings can only cross the river directly in front of the Welsh.  It would be interesting to try it with 6  vikings or to give them chainmail and see how they fair.  (They weren't expecting a fight so didn't bring it)

In summary I think Mr Buchel and Gripping Beast have a great skirmish game on there hands.  It is harder to make a game simple than to make it complicated.  The dice mechanic is different and works.  I will modify it to suit my needs.  I will add variable movement, simple spotting and simple comand and control rules as well.  For the solitaire gamer I think this game will work.  It is not particularly solitiare friendly but it is not particularly difficult either.  This game would do well with the Platoon Forward treatment.  I think a solitaire friendly scenario generator and campaign game is very do able.  Chris and I have talked about it and I will add this after Squadron Forward and Middle of NoWhere.  Warband Forward anyone??

Joe
Posted by FlightDoc at 2:54 PM