Actually did get to play Platoon Forward last weekend while I continue to paint more Vikings for SAGA.  Started a brand new platoon--british 1940 in Egypt.

SLT Nelson stood on the rampart trying to peer through the perfectly laid Italian smoke screen.   What the Major had feared had happened.  "The Italian army was on the move and we have damn little to stop them!  Leftenant, take your platoon to this station here and delay them while we set up a defensive postion 6 miles back.  See if they have any fight in them.  You will have a 2 pdr with you and I will try to scrounge an armored car or two."

Nelson deployed the ATG on his far right [ left in the photo above], 2nd section in the station with Egg down below and himself above with the bren team.  2 in Mtr and FO on the road.  Sgt Smith in the center building ready to reinforce either way.  3rd section was split.  The bren team was dug in at the turn of the road and Joey took 4 men and a ATR and hid in the building hoping to ambush some armor and then skeedadle back to the lines.

A perfect smoke screen was laid in front of the central buildings as the Italians probed forward.

The AT rifleman's shot rang true and the armored car was knocked out.  The accompanying infantry started peppering the building as Joey started whis withdraw.  One man went down as they made it back to their bren team.
The Italians were not able to make much headway and SLT Nelson was feeling confident, particularly when a british AC showed up and began to rake the Italian infantry with 303 shot. [Cool random reinforcement!]

Then an Italian tank and 2 infnatry squads showed up on the right flank.  The 2pdr quickly dispatched the tank and his bren team was keeping the Italians at bay when suddenly an officer rose in front of them and they seemed to rise in unison and charge through the bullets towards the station! 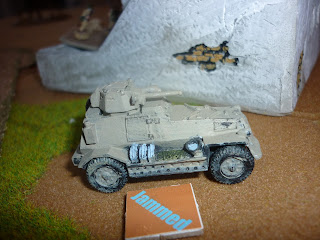 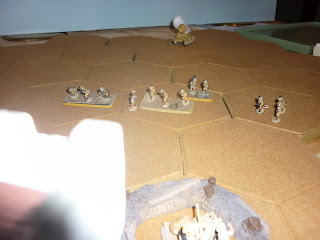 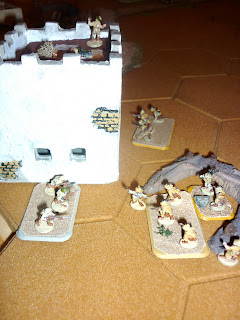 Italians reach the station and take the ATG!
1st section is too late to reinforce

﻿The Italinas drive 1st section away and enter the station proper leaving SLT Nelson trapped on the roof with his bren team.  In the courtyard desperate fighting breaks out as Egg fights to get back to the stairs.

Egg is repulsed.    As this is occuring, a green flare is sighted from the east.  That is the signal for the platoon to pull out of their postions and board transport.  Their job is done.
Sgt Smith takes charge.  He orders Cpl Crocket's section out as they are down to 50% effectives.  He and Egg have one more go at the the station but the Italians have moved up a MMG and it is no use.  Fearing encirclement he pulls out the rest of the platoon.
SLT Nelson defends the roof but it is just a matter of time.  He has 3 men with him against 18 Italians downstairs.  His force takes two down but then he loses one.  With honor intact; he surrenders thus ending a very short war. 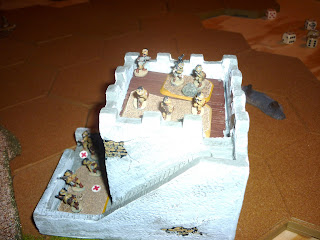 ﻿The Station under new ownership!

﻿Great game!   I played the delaying action and it looked like an easy win for the british because I could not drawn the Italian LT's command card.  [ he was leading the flank attack.  He started out a Gr III leader but a random event upgraded him to a Gr IV outstanding leader]  Once I started drawning his card the Italians caught fire and never looked back.

Post game  3rd section has had a drop in morale and we will be getting a new SLT.
For those of you that want to play the scenario the Italians initially had
2 squads, 1 MMG and an AC   with 1 Gr II leader and 1 GR I leader.    They also get 2 pre game stonks from a 75mm gun that can be used for smoke.    They also can have 3 fire missions during the game.
According to the scenario rules a flank attack will occur.  This consisted of 1 tank plus 2 squads with 1 gr III leader, 1 Gr II leader and 1 gr I leader.  I modified the scenario for the desert by adding 2 "C"s to the mix.

Joe
Posted by FlightDoc at 3:53 PM