Have been working on the mission tables for Squadron Forward.  Unlike Platoon Forward, almost each model of airplane will have it's own table and this will vary by year and theater.  For example, a ME 109 in 1940 would have a differnt mission profile than in 1945!
Rich and I are going to start working in earnest on Squadron Forward after the Christmas Special.  I hope to have the finished product end of January or Feburary.  Like Platoon Forward, Squadron Forward is the way I play my games so hopefully you will enjoy it!

I visited The Eagle pub in Cambridge last week.  It is an authetic WW II pub used by the RAF and 8th AF pilots.  The food was good and reasonably priced and they have an aviation room.
So despite my finishing up my vikings this weekend, I played a battle with my P-51 blue tails.  This is thiee 4th battle and they are a hard luck squadron with a poor reputaiton.  They were bounced by FW 190s and lost their CO on the first mission.  On their third mission they missed the rendevouz with the bombers!
I roll up a mission and get escort strategic bombers.

Capt Anderson looked at the thread going all the way to Frankfurt.  This was a long mission for the bombers in March of 1944.  He was to lead a 6 ship and pick up the bombers on the way back from the target.  Maj Franklin, the CO, drilled into his head not to his the rendevouz!  The other squadrons were still laughing.  The weather was clear today which should make it easier.
Pilots
Runway Anderson   Naive    Government
2lt   Pierce McKennon    Mecurical     Family

On the outbound leg Chance had trouble with his oxygen so aborted; down to 5 planes.  [ In real life most pilots didn't realize problems with their oxygen and just dropped out of the sky.  SF is not that realistic!  We want you to have a chance with your pilots.]  Runway breathed a sigh of relief when he saw the bomber stream heave into view right where it was suppose to be.  Rendevouz on time!
An interesting thing happened in rolling up the enemy fighters.  I got bomber destroyers 6 ME 110s armed with rockets, and fighter cover, 3 ME 109Gs.  The germans had obviously been watching because they attacked the bombers directly opposite the blue tails.  [this sequence is all handled by the rules] Outmanuvered again!! 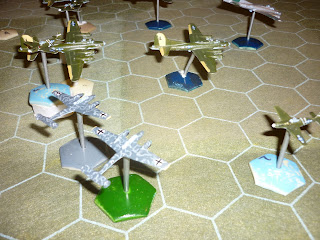 Germans start their attack.
Pudge is to the right

﻿Runway kept his element above to tackle the ME 109s and sent the other 3 down to tackle the ME 110s.  All the german fighters fired rockets before the blue tails could react.  Fortunatley they all missed.  Runways' wingman has a reputation for getting "lost" during the action but stuck to his side this battle.  They were able to damage 2 of the ME 109s and quickly drive them away.
Next Runway did a split S and got behind a ME 110 with his new 6 gun P-51.  As bullets streamed into the german he began to burn. 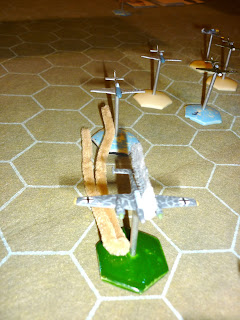 ﻿As the german dove away he exploded.  Runway had his first kill!   Next he heard a call for help.  Pudge was in a bind.  His wing was about to fall off so he had no manuverability and he had a ME 109 on his tail. 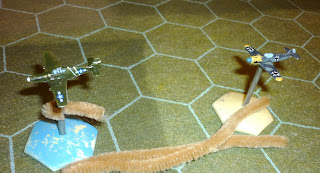 ﻿[Pudge did not have a wingman this battle as Blake aborted.  I let him go solo as he was the only veteran pilot in the group.  I have a warm spot for him because he was the first pilot in the squadron to score a kill.  I really wanted him to score this battle and become the leading scorer again.  Nervewracking this game is...]
Runway raced over to Pudge and drove the german off his tail!

Meanwhile, the ME 110s had downed 1 B-17 and damaged 1 other.  Turlock and Thornell had lined up on a pair of ME 110s when the back gunner damaged Turlocks engine. 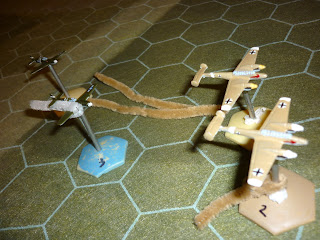 ﻿2Lt Thornell followed the other ME 110 down scoring hits but became concerned that he was going to become sandwiched between the two 110s and gave up the chase.  [amazing when you become attached to these guys how you act]

The rest of the mission over the contenent was uneventful.  Over England it was raining...
The three undamaged fighters set down without a problem.  2Lt Turlock nursed his plane home, skidded off the runway but was otherwise fine.  [There are tables for all of this as well]  Capt Anderson had trouble keeping trim and altitude with his aircraft but made it safely to the field.  The slick runway did not help.  He crashed midfield trying to land. He was pulled out alive and Doc Thompson said he will fly again.  [We always knew he was a tough, if naive, SOB.]  The plane is a write off.
Great game!   It was a victory for the blue tails because if you are outnumbered at least 3:2 you can lose 1 bomber and still claim victory.  We scored 1 kill as well and ended up gaining 1 cool point which puts us just under average.

Post game     Capt Anderson became a veteran pilot [ AKOT handles this].  His naive ways in the hospital have won over Doc Thompson whose obnoxious style gave a -1 modifier to all previous rolls.   We are up to neutral with the Doc now  2Lt Turlock did not become a veteran pilot but he did get promoted to 1Lt largely due to the wing commander liking him.  Lastly 2LT Gray has joined the squadron.  He is a pessimistic young man who believes in the great crusade [government] and he is a rookie pilot.

Really enjoyed the battle and how Squadron Forward is shaping up. The characters and stories are great.  But I really like not having to figure out the mission I am going to fly each time.  Who should I fight?  How many?  Should this be an escort or a strafing mission?  I just decide I am going to use my blue tails and the system takes care of the rest.  I hope you guys like it.  As stated, it is how I play my games.

Joe
Posted by FlightDoc at 1:54 PM