Sorry for the long break--  real life got in the way.
The good news is that with this final playtest of Villiage Sweep my asymetrical suplement for Platoon Forward, Middle of NoWhere is done.  It contains a new Table A and B as well as a new table for meeting NPCs (you have a higher chance of meeting interesting folks now.  While a symetric line unit has a chance of meeting a black marketeer or a man from the ministry, a unit involved in "peacekeeping operations" is going to have a better chance of meeting someone like that.  ) as well as 5 new scenarios.  The scenarios are :   Villiage Sweep, One of are planes is missing, Hammer Dawn, Ambuscale, and Ft Apache.

The whole project has been held up because I could get the right feel of a villiage sweep.  It always either ended up a villiage fight or a delaying action.  I think I have it now where the player has to move through the villiage fast to search it while brushing aside light resistance.  However there is always a threat that the enemy might be stronger than anticipated and it could devolve into a villiage fight.   My latest playtest...

Sgt Bustamanti listened as Lt Chianti went over the plan.  Intelegence had pinpointed this villiage as a storage area for weapons for the rebels in Ethiopia.  The mosque was actually the local headquarters and three other sites identified as probable caches.   The Lt would lead one squad to attack two buildings and support Busamanti's attack on the mosque from the oppostie side of the villiage.   After that they would quickly search the rest of the villiage.    Speed was critical as the locals would rapidly move supplies out once the Italians entered.

A tip off (pre battle event) told the platoon that a squad of rebels were in the mosque.  The attack commence according to plan.   [  Sorry no pre battle picutures as I lost my camera!] 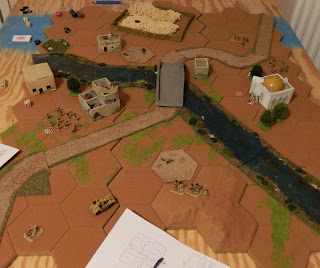 Sgt Bustamanti attacking the mosque from the top of the picture.   Lt Chianti takes the mobile element of the squad and attacks buildings south of the river while the LMGs and "autocar" support the attack on the mosque. 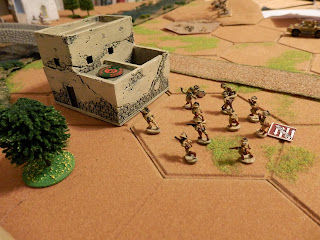 5 rebels fighters keep the Italians at bay.  [ the green marker means it is a location that has to be searched.] 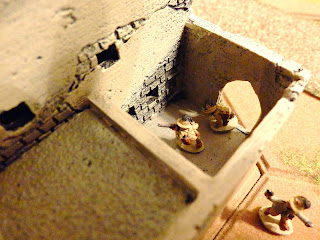 Finally the Italians gain the courtyard!  Lt Chianti looks on. 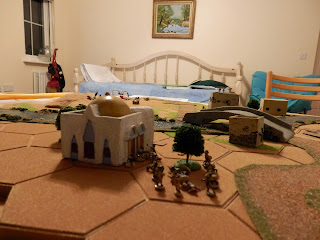 Pvt Pinchela closes in on the Mosque. 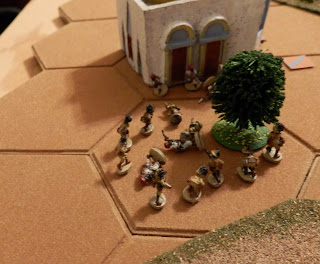 Close quarter fighting leaves dead on both sides but the rebels flee.
After a 5 minute search an arms cache is found in the trees behind the mosque!

Lt Chianti's men find food as others race across the bridge harried by a lone sniper. 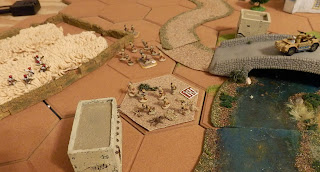 The Italians move north of the river looking for an eluisive sniper.   5 additional rebels arrive along a field (left) but disappear rapidly once all the additional equipment in the villiage has been relocated. 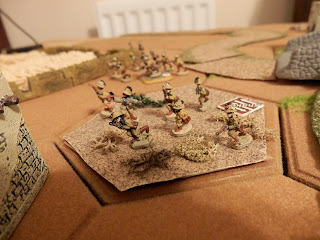 Lt Chianti arrives to rally his men.  They then enter the building to flush the sniper and search it.   But the rebels have done their job.  Both the sniper and any items have vanished into the desert.


Great game.   Technically the Italians lost as you have to search 3 locations to win but both of the locations the Italians searched revealed good stuff so I called it a minor win.  Pvt Pinchella has been acting ASL since Cpl Fan was invalided home so both Bustamanti and Lt Chianti ask Capt Butro to promote him.   Suprisingly the Captain refuses.  Cpl Stanza is brought in instead.  The squad is not happy but Stanza is a gr II leader and is a likable guy so things will probably work out.  Also Sgt Bustamanti meets and befriends a local priest, Fr Franco.   Could set up some interesting stories there!  Finally Lt Stinna of the armor pledges his support in the next mission.

So I am happy with Villiage sweep and I am happy with Middle of NoWhere.  Don't think there is enough to publish it as a stand alone supplement  (6-7 pages) so it will probably be a magazine article.   Will start to work on that.

Posted by FlightDoc at 1:55 PM