Finally took a break from WW II ground operations and went back to Release the Hounds.   Painted up my last two MO-4 boats ( okay they are Japanese minesweepers) so figured I would give them a go.   This is a new unit for my Flotilla Forward as I am shaping this ruleset.  They intercepted a convoy (posted 26 August).   Here is only their second battle.

Capt Lt Marinesko left the COs office.   Sounded like a suicide mission to him but the commisar talked about doing  everything we can for the ultimate victory for the Party.  All they had to do was go into a river and take out 2 flaklighters with their MO-4 boats.  He pointed out that the Flaklighters outgunned his ships with their 88s.  Capt Lt Poleshchuk pointed out those very 88s were killing brave russian soldiers and needed to be destroyed.  Marinesko knew orders were orders.   He thougth he would give this assignment to Starschi Lt  ( O-2) Bodanov his deputy.   He was a zealot though he drank too  much.   He would love this kind of thing!

Bodanov was thrilled with the assignment.   Marinesko made sure he got one of the new armored boats for the mission and he picked his officers.  His wingman would be Lt Rall.   He was up through the ranks, good sailor and loyal comunist.  Lt Giehorvcev would lead the second element.  He was a popular officer and steady under fire.  Lt Semyon would be in the fourth boat.  He was realatively new to the group but seemed fine though  unpopular with his crew.

The plan would be for Bodanov to deal with any escorts in the mouth of the river while Giehorovcev went up to the Flaklighters and pounded them.  If any boat was heavily damaged they were to withdraw; this was not a suicide mission.   A damaged flaklighter would be forced to withdraw for repairs. 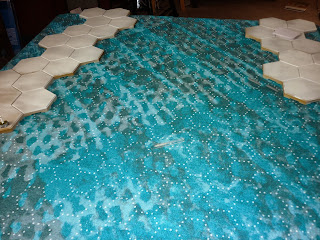 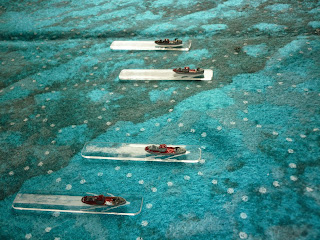 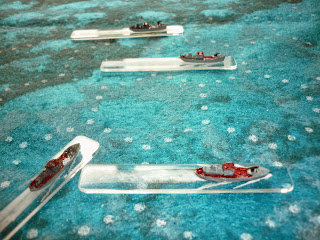 Bodanov opens up on the Raum boat while all 4 boats move into the river looking for the flak boats.  The Raumboat is outgunned and takes some damage.  All eyes scan the shore looking for their prey knowing that the german crews are moving to man their guns.  At a mile the target is sighted to starboard.   The valiant russians move in as the flakboats open up! 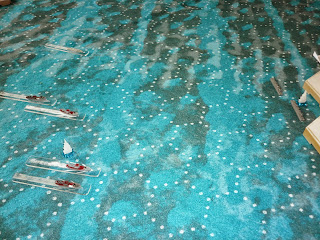 "The heros of the Soviet Union make their attack run on the evil empire!"   Boat number three ( Lt G) takes several 88mm shells that damages steering and the boat heavily and he drops out.  ( Each hex is 200 yrds) 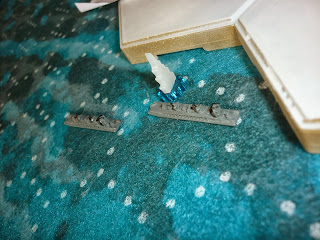 "Perfectly aimed shells hit the german vessels but no telling damage is done."  They leave their moorings. 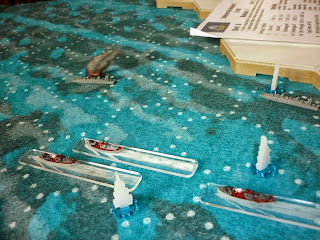 " The brave sons of Mother Russia, led by SLt Bodanov, pound the german craft until one bursts into flames!" 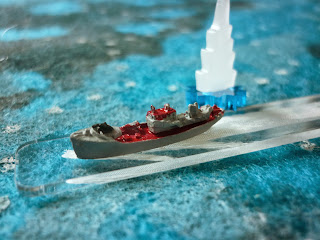 The russian boats complete their attack run causing leaving one lighter burning and the other one damaged.   The raum boat is also burning.   Unfortunatly, Lt Rall's boat recieved multiple hits and he signals May Day.   Both Bodanov's and Semyon's ships are damaged; Bodano's own ship can only make 15 knots.  While fanatic to the worker's paradise, Bodanov would like to live to see it.  He decides against another attack run.  He orders smoke and the russians retire. 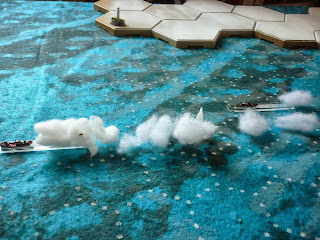 
Great game!   Exciting as I thought the russians would get pounded.   The 1 flaklighter was actually heavily damaged and on fire.  Post game it was quickly repaired but I gave the victory to the russians.  Lt Rall and his crew was captured.  Post game events included the commisar offering a favor to SLt Bodanov.  So I decided he made a heroic story of the whole attack that really took off!  The quotes above are from the story.  :)    This of course did not make Capt Lt Marinesko look good or make him happy.  Should be interesting times around the flotilla...

Posted by FlightDoc at 1:23 PM