Screaming Eagles at the villiage Church

Well, played another  land game over the weekend.  This one was Lazy TW&T not CoC.  (For those of you that want to play Platoon Forward using CoC go to the comments under my last post.)   Nothing fancy, typical Normandy outing.  Thought I would pull out my airborne platoon.  These guys are mildly interesting as they lost a squad leader so there was some internal shuffling among the NCOs that Lt Ramsey had to do.  In addition the Company CO was so happy with their last roadblock mission that he offered an armored car for their next mission!
I rolled up a "Patrol" scenario and used the urban table for the board because I wanted to use my Rathaus that I never get to use.  Thought I would use the 2 main squads to this one and have SSgt Taylor (Gr III leader) run it.     Rather than take an armored car into a town I took a jeep.   (I decided that the jeep would not count as a vehicle when rolling for my "Cs". )
D Day + 4    Outskirts of a large french town.  (They all look the same!)

Lt Ramsey came back from Company.   "Sergant Taylor!   The CO needs to know if the Germans are in the town.   Take two squads and proceed to the center of town and find out.   Capt Newsome has provided a jeep from recon for some additional firepower.   Billy, don't take chances; center of town- find out what we are up against and come home.  Got it?" 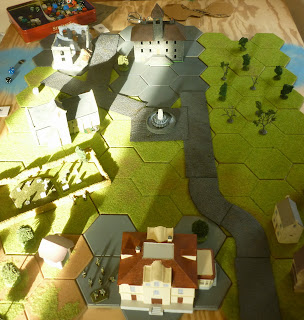 The center of "Whateverthehellitscalled".    US enters from the bottom.    Cool Rathaus at the top.
Bill's plan is to enter from the left and make a clockwise circle of the town.   You can see the advanced scouts at the graveyard and Bill next to the red roofed house. 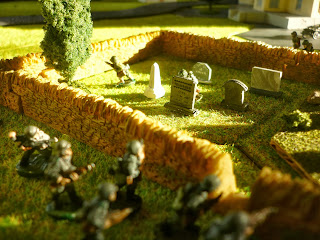 Two scouts run into germans across the graveyard! 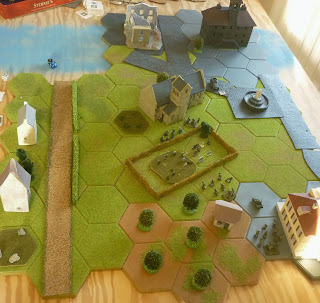 [ I love patrol scenarios because you never know what is going to happen. I hate patrol scnearios because I always set up this great board and 80% of the time only use a small corner of it! No rathaus!   However, I rolled up some new sections of the board so both sides could flank the graveyard if they needed to.  Compare this picture with the original board. ]

SSgt Ramsey acted quickly and moved into the graveyard scatering the german squad.   He ordered Sgt Goldberg around the left flank towards the Church. 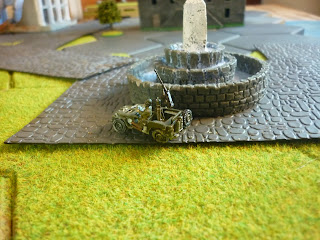 The jeep moved up and started dueling a german halftrack and surprisingly did well!

After some supressing fire the paratroopers were going to close with the enemy in the church but as they entered... 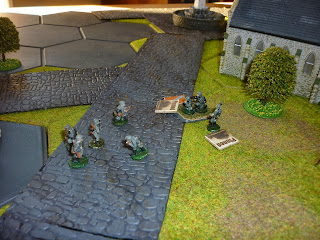 The germans withdrew out the side.   (with a jammed LMG) 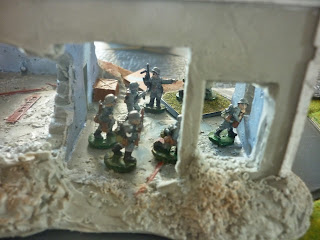 and set up in a ruined bank where the NCO rallied his men.   (and fixed the LMG) 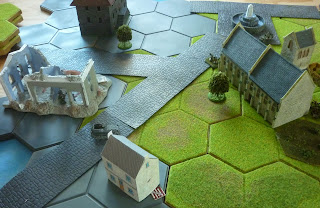 The second german squad was in the house at the bottom of the picture.   The paratroopers were in the church.   At this point the germans had 2 casualties, the americans none.    There was 40 yards of open terrain between the two positions.  After a minute of trading shots the germans looked determined so SSgt Taylor decided he had fulfilled his mission and withdrew in good order.

Great game that played fast.   I called it a draw.  I give the paratroopers a card I call "tactical iniative".  This can be played on any section (not squad) to allow them to shoot/move/ or rally without leader bonuses.   This models their espirit.   In a CoC game I would give them an extra die.  This card came up at the right time in the graveyard.  Post game SSgt Taylor gets the chance to brief the battalion CO (LtCol Strayer) and impresses him.  Also an armor leader (Sgt Lujens) that the platoon had met after D- Day was wounded and sent home.

Posted by FlightDoc at 2:27 PM