Meeting engagement at the river Wy

Now I know what some of you are thinking; Joe that is great that you are doing all this cool naval stuff.  I am sure at some point it will turn into great stuff that we can get our hands on but for now we have Bolt Action or Chain of Command.  Come on!   Where is the Platoon Forward stuff?!  Rest assured it was back to my roots this weekend using the platoon that started it all on my blog; yup.  Go back to the first two posts and you will see my british platoon near Singapore.  They haven't got much use since those first several battles.  One of the great things about Platoon Forward is they have been waiting for me and now the time was right!   I rolled up a recon mission and changed it to scenario R (found in one of the Lardie specials) which is a meeting engagement.

Timbo Rodgers was flushed with success after saving the Reverand.  The problem was the front, if you could call it that, was crumbling.  The Japanese were not sticking to the roads and were constantly outflanking the British.   Maj Ralls got right to the point, "We need to secure the bridge over this small river.  Hopefully the Japs aren't there yet.  Timbo, get up there and hold it until the rest of the company can get there.   I have secured an armored car to help.   Good luck!"

As the british approached the bridge it was quiet.    Timbo led with Dritmore, his best leader, followed by Nails.   He kept 1st section in reserve as they had been shakey as of late.  He planned to keep them on this side of the river to lay down covering fire. 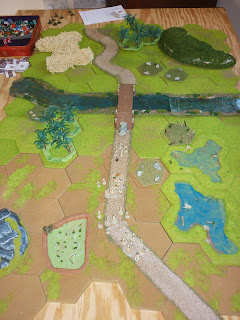 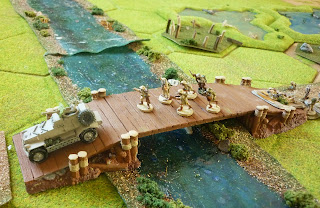 So far so good!   Cpl Driftmore leads his section over the river Wy.
Driftmore broke right when a light Japanese tank was seen coming up the road.  He moved towards some jungle where he encountered enemy infantry.   A lound clang heralded where the tank had found the range to the British AC.   While not defeated, it beat a hasty retreat.  Timbo quickly
Moved 3rd section across the bridge and to the left into some high grass. 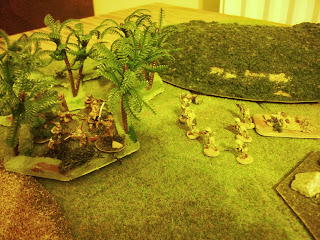 2nd section takes on the Japanese 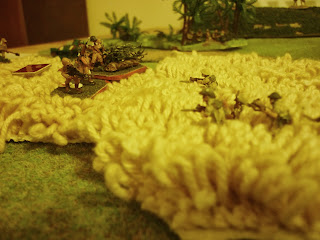 3rd section in the high grass
3rd section held its ground.   2nd section retreated after a ferocious fight that saw Cpl Driftmore
and the Japanese LT go down. 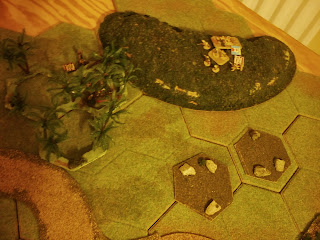 2nd section retreats back up the hill
This was the critical moment in the battle.  2nd section could be cut off from the
river.  Timbo left 1st section's bren but took the rest of the men across the bridge towards
the jungle.  (picture blurred sorry)   Timbo placed them in some rocks and sprinted up the
hill to rally 2nd section.  He couldn't understand why they retreated so far until he came upon the
wounded Cpl Driftmore in a makeshift stretcher.  "Sorry Sir." was all he could say.
Meanwhile...the Japanese also knew it was the critical moment in the battle.  So while Timbo was on the hill... 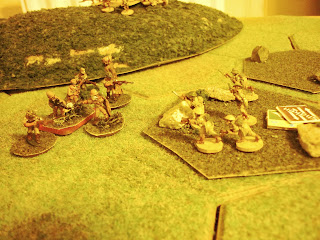 ﻿
﻿
﻿
﻿
Remnants from the jungle battle see their chance to finish off the Tommys
The British fight heroically with Pvt Billings dispaching 3 personally  (hero card) including
the Japanese Cpl.   This leaves 2 Japanes privates who choose to fight to the death.  2nd section, newly rallied under Lt Timbo Rodgers, gives them their wish.
With that the Japanese on the opposite flank retreat and all becomes quiet along the Wy once more.
Great game!   Meeting engagements, while rare, always make for exciting games.   Post game Cpl Driftmore lives but will miss two battles.  Pvt Billings will lead 2nd section.    The platoon was going to have trouble replacing their losses but Maj Rall diverted some from other platoons to keep this platoon full strength.  Of course this means we will probably continue to pull the toughest missions!
For those of you that want to try this at home the following forces where generated:
1 squad,  1 LMG team    1 Gr III Lt     2 Gr I NCOs
1 Lt tank,    1 37mm  ATG
I also played a SAGA game that I didn't write up.   My vikings raided a welsh farm.   I rolled up the scenario and it played well.  (Warriors Forward)   I did take one picture. 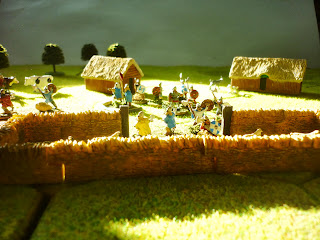 Dawn breaks over the country side as sinister forces are afoot!﻿