I was a playtester for TFLs Chain of Command.   Rich was kind enough to send me a final copy.  While I worked to make it a great product and I believe it is one of the best rule sets out there I always felt it basically was "Lazy TW&T" with dice instead of cards.  { If you double the dice for Lazy TW&T you get Chain of Command numbers. }
Armed with the final copy I thought I would give it a go!  I played out the pre game phase for the attacking germans to determine their starting points but placed the defensive markers for the russians as per normal Platoon forward.  The platoon chosen was my SS platoon on the northern part of the russian front in 1941.  This is their 7th battle.  They are seasoned troopers though 1st squad has a new squad leader.  They did lose their last battle.

Oberscharfurher Kehl was pleased.   They were nearing the prize; Lennigrad.   Once that and Moscow were captured the german folk would have the living room they needed and his platoon could all go home.  He smiled then brought himself back to reality when Untersturmfurher Christianson said, " I am glad you are happy with the assignment! Your platoon will hook left through the pillbox around the town while the rest of the company pins them in the town." 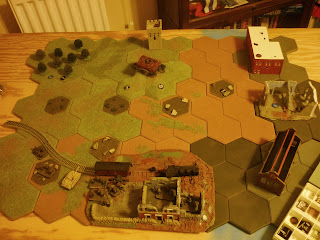 Kehl's plan was to have smoke cover the pillbox then send 2 squad up with the flamethrower team to take it out.   1 squad (with the new SL) would deploy with himself in the railway station to provide cover.  3rd squad would deploy to the left behind the tracks to provide cover and then advance into the woods. 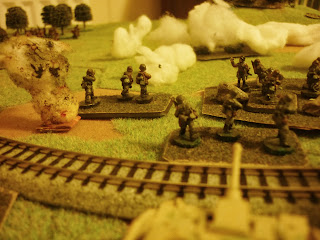 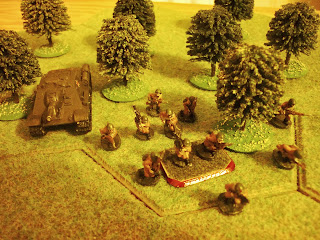 Russians in the woods!!
2nd squad got into position and when the smoke cleared destroyed the 45mm ATG in the pillbox. 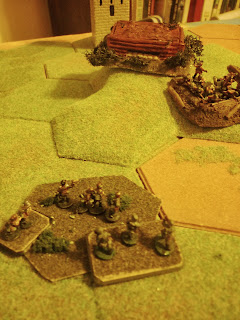 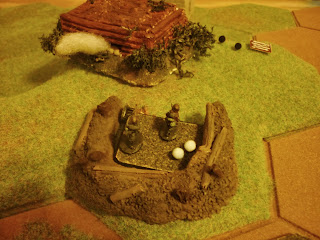 Then after a vicous firefight managed to drive the russians off the hill and 4 germans made it into the trenchworks.  (with 2 shock)
The russians threw every available gun at those four men.   Schar Kurtzon was back at the train station trying to rally the rest of the squad.  Kehl sent 1st squad through the withering fire toward the hill.  His original plan abandoned with this new opportunity. 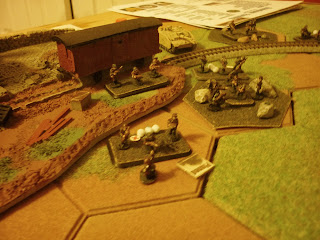 1st squad having a rough go of it!
At this point a random event brings reinforcements to the platoon.  With the russian SPG destroyed I bring in the platoons halftracks with a visitor... 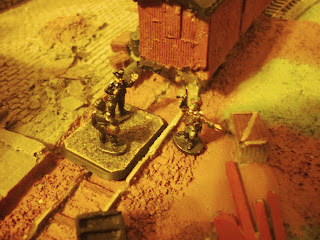 Untersturmfurher Christensen shows up to see what is taking so long!   Kehl points to the criscrossing MG fire. 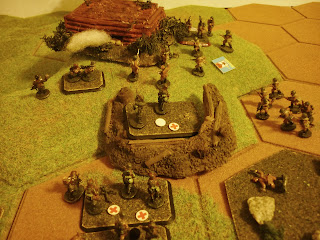 Ferocious hand to hand fighting occurs around the entrenchments with the germans giving better than they get but they are badly outnumbered.   Kehl starts to run towards the melee but the german officer holds him back.  "At this point there is nothing you can do; we will wait. "  The germans fight tenaciously but the russians fight like men possessed.  It is no use, there are too few SS standing.  Kurtzon orders the retreat as 3rd squad covers.
There will be no breakthrough today.

Great game!!    Down to the wire.   I rolled two random events at the end that favored the russians.  One was a morale increase to the russian squad and then they generated a hero.  Very cinimatic in a bad way-- 2nd squad didn't stand a chance at that point.

Post game  3rd squad was actually chewed up by the russians in the woods with 50% casualties and their morale goes down.   The CO is not happy and a half squad will be pulled next battle for other duties.

CoC played well.  I still like the cards of TW&T better than the dice of CoC. They do the same thing but the cards give you more scenario design flexibility and I think it is harder to move your squad.    Funny that when people roll dice they call it luck but when people draw cards somehow it is preordained.

That said I think CoC is a great game system that give the player the challenges of commanding a platoon in WW II.  It still allows you to play the period not the rules and meshes well with Platoon Forward.

For those of you that want to try this scenario I rolled the following for the russians:
1 senior Ldr
3 squads each with a junior leader
1 MMG,  1 Lt Mtr
1 SPG