Counterattack by the desert rats

Long weekend so got three games in:  a game of SAGA, small game of Donnybrook and a game of WW II Donnybrook.  Am working to see if I can come up with a tactical system that I like better than Lazy TW&T.  So far it is promising.  If a soldier is hit you roll to see if he is pinned or KIA.  Once the unit has 33% of its forces pinned the whole unit is pinned.  I have tweaked morale as well.  So I needed a platoon to try my new system on and decided to use my desert rats. (Platoon Forward hasn't changed and will be used with this new system as well.)   They are not a great platoon but they constantly win games.  They have a new Lt who is still figuring things out but the platoon Sgt (Smith) has really caught fire as of late and was promoted to a level II leader after leading a counterattack back into a fort last battle.  3rd Section has been a problem since they got clobbered at the beginning of the war and lost 4 men.  They developed a reputation as a hard luck section that they can't seem to shake. There morale is down one making them raw for our purposes.
I rolled up "counterattack" which is a scenario I haven't played in ages.  It is a fun one as it is designed to be a cavalry to the rescue type.

The Italians were attacking towards Tobruk.  SLT Audley's company was held back in reserve in case they made headway.   Maj Barns, the CO, called the platoon commanders in.  "The Italians are attempting to cross the Wadi Ashor and are making good progress.  We have been tasked with stopping them.  Johnny, you have lead and I am coming with you." 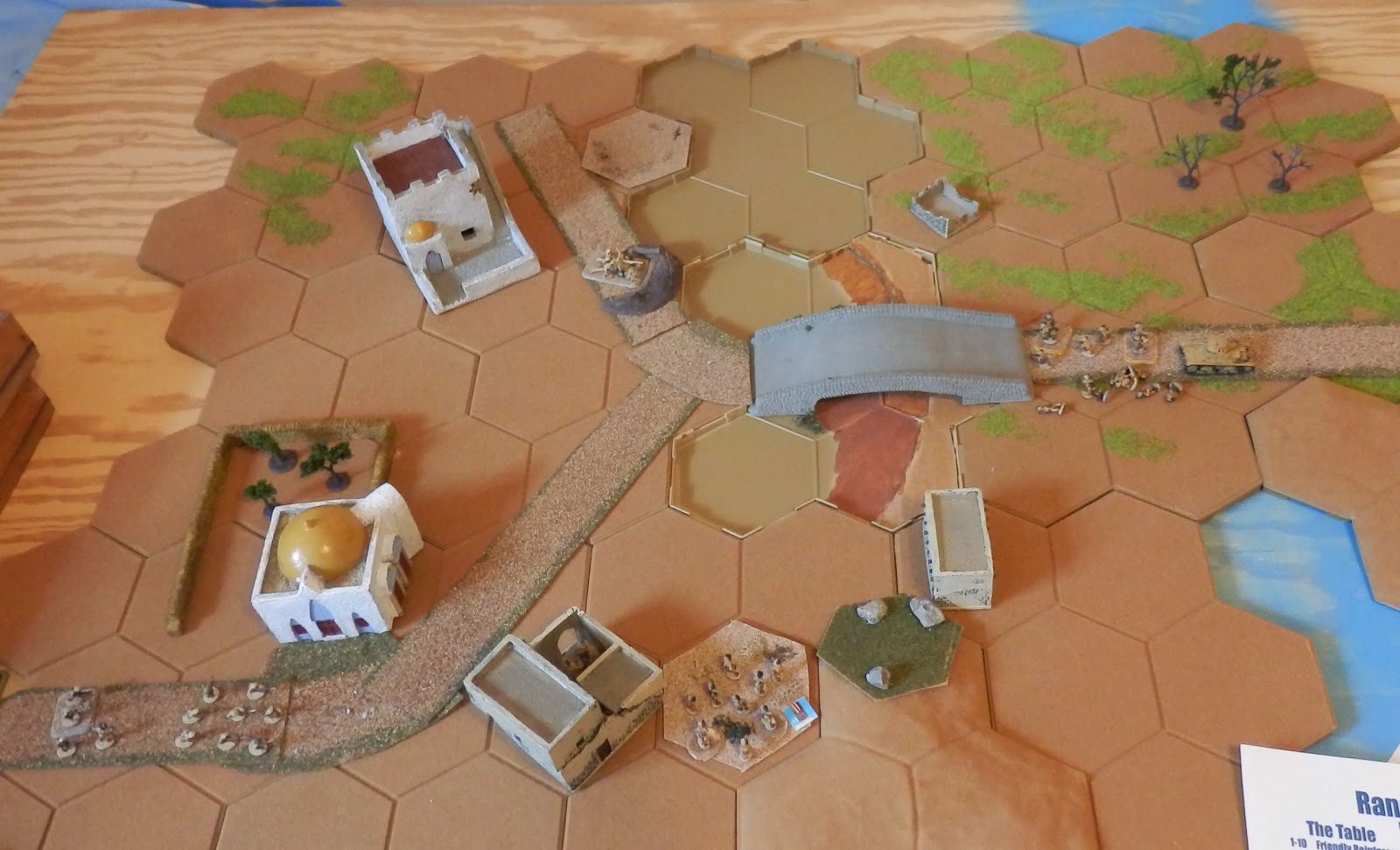 The Desert Rats arrive!   1 section with Sgt Smith entering from the left.  Italians have turned the british right flank and have a LMG in the house facing the street.  They are also preparing to cross the Wadi.  A 2 pdr AT gun guards the bridge, all that is left of the defenders. 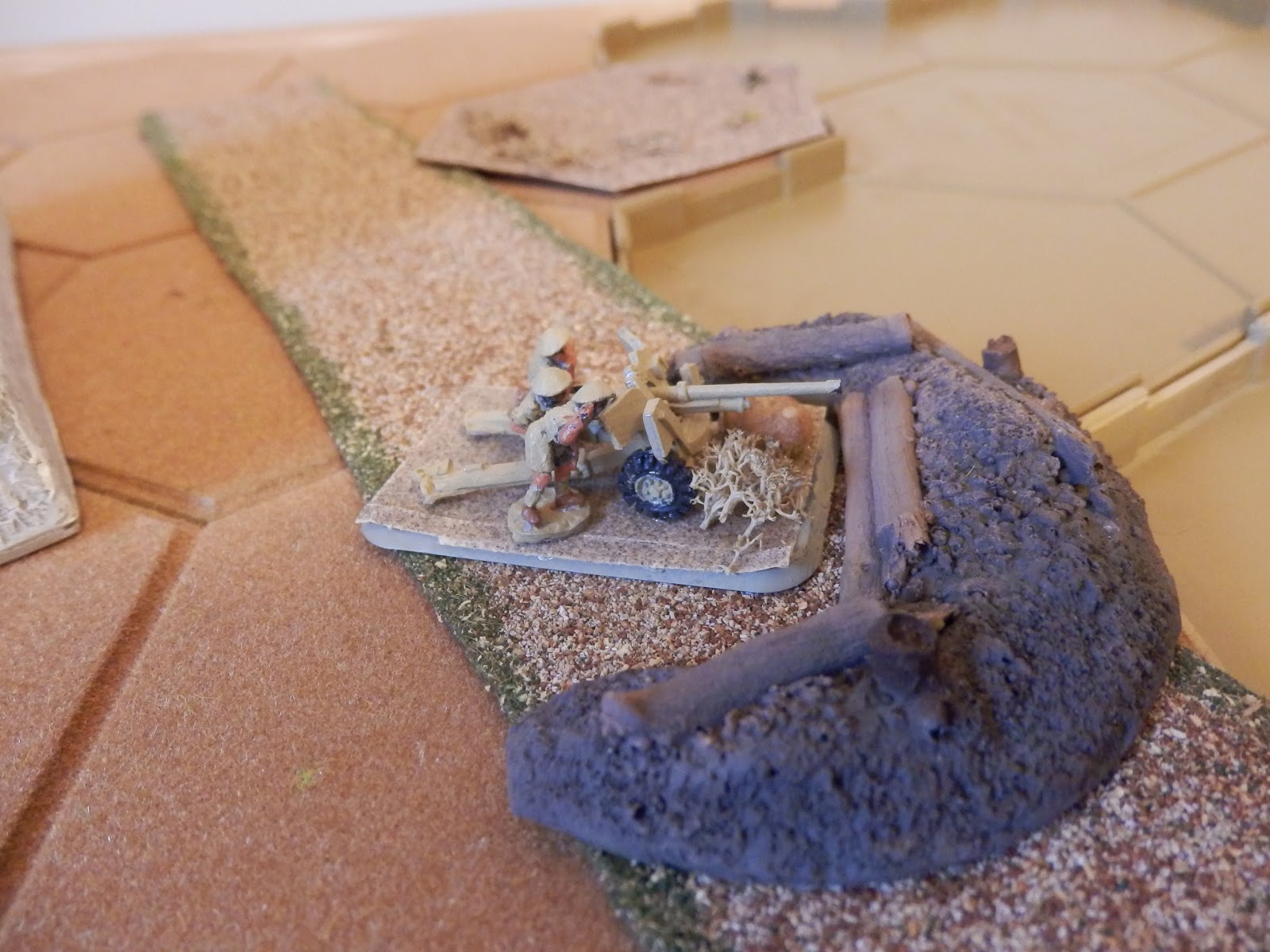 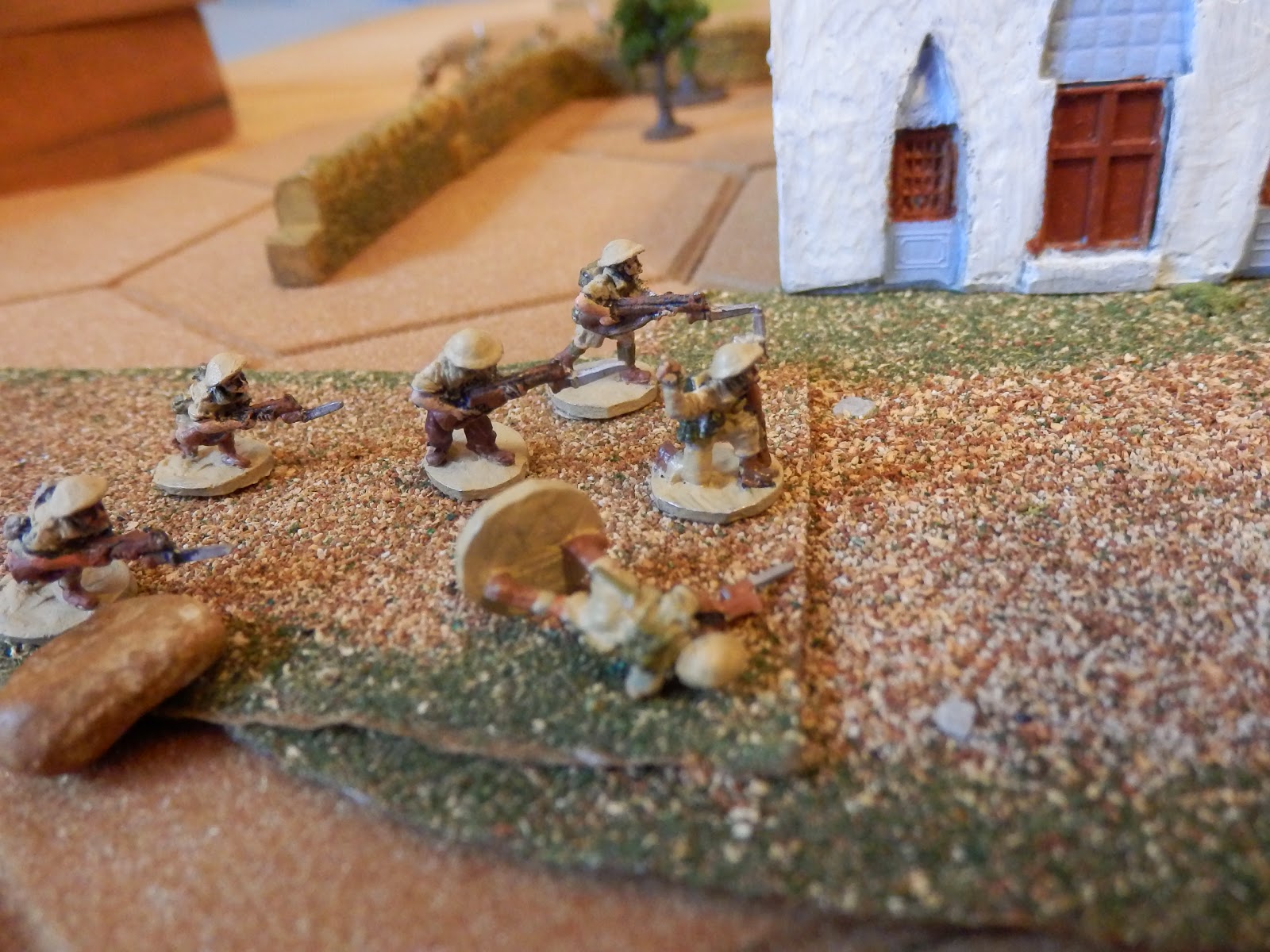 Sgt Smith moves up the road and attracts LMG fire!   1 down and 1 pinned (shown by the rock)
SLT Audley moves the bren team into the Mosque and starts to fire at the LMG.  Sgt Smith rallies his man and moves right towards the house. 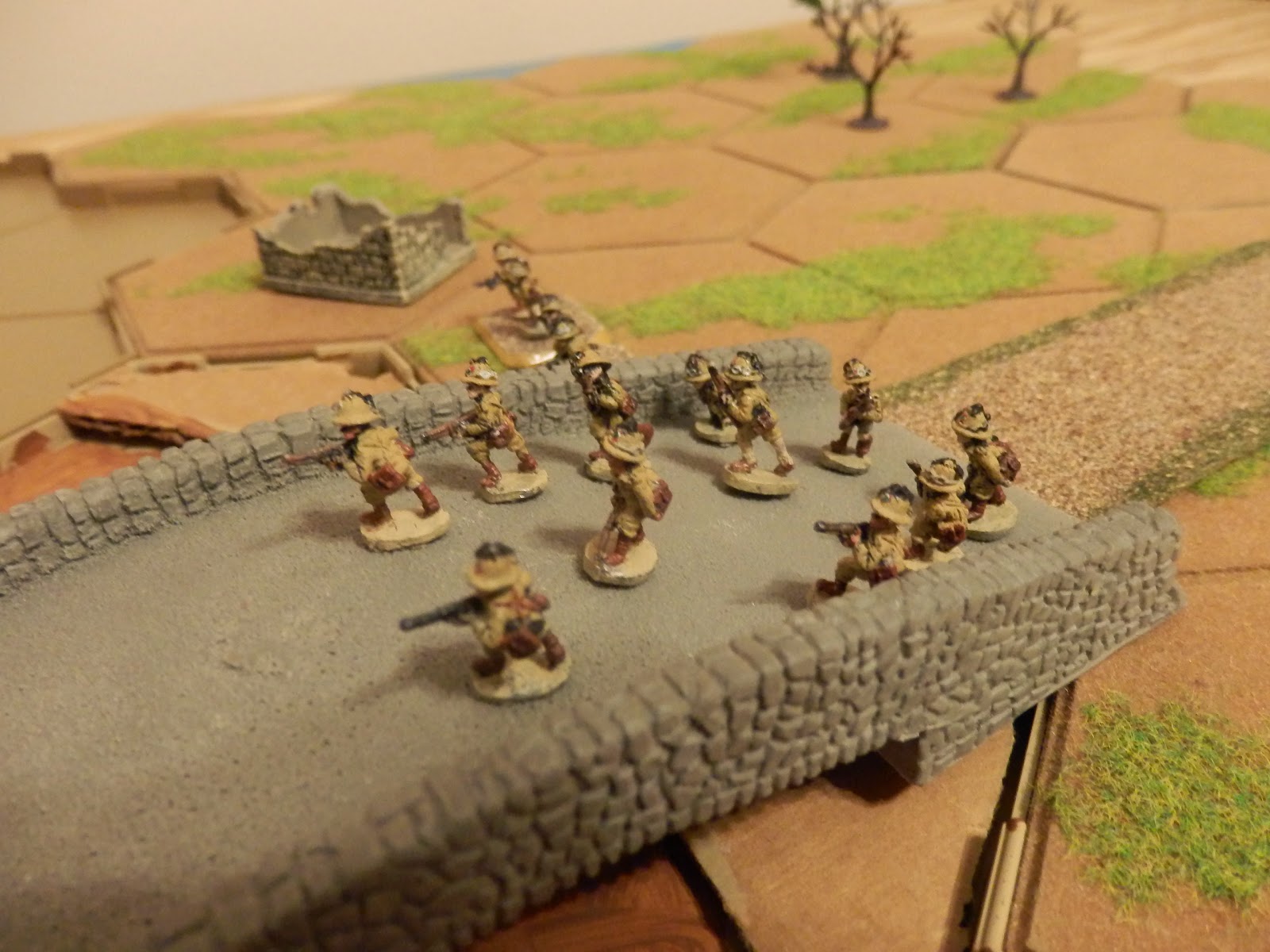 The Italians make a move over the bridge!   SLt Audley shifts fire to the bridge and the Italians pull back leaving two on the bridge.
Maj Barnes orders 3 section over to the small fort behind the AT gun.  MMG up to the mosque and 2 section in reserve.   The Matilda fires up hte road at the LMG. 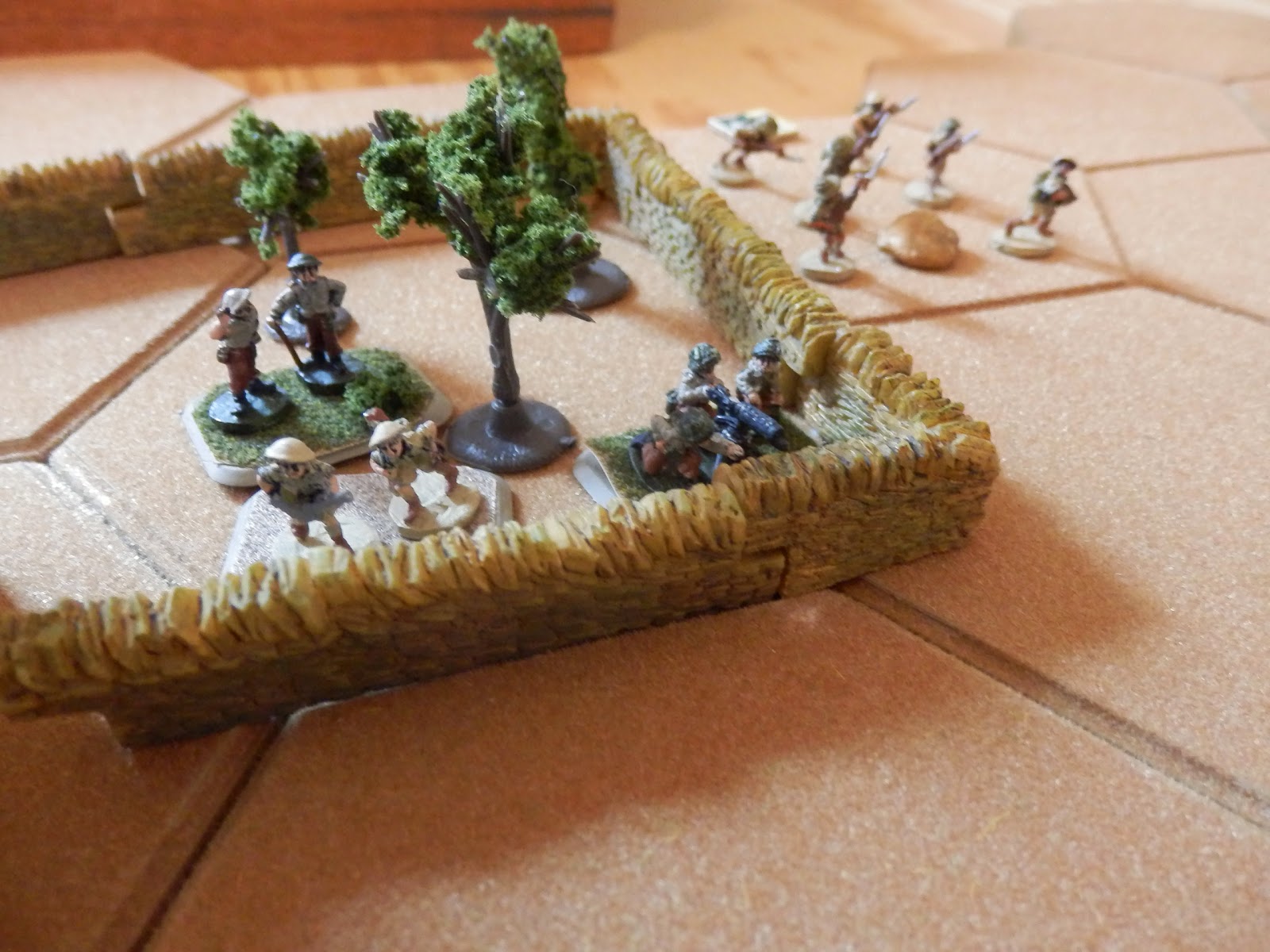 Maj Barnes in the olive grove with the MMG and 2in mtr. ( No pansie tropical dress for him!)  You can see 3 section NOT moving behind them.  (notice large pin marker) 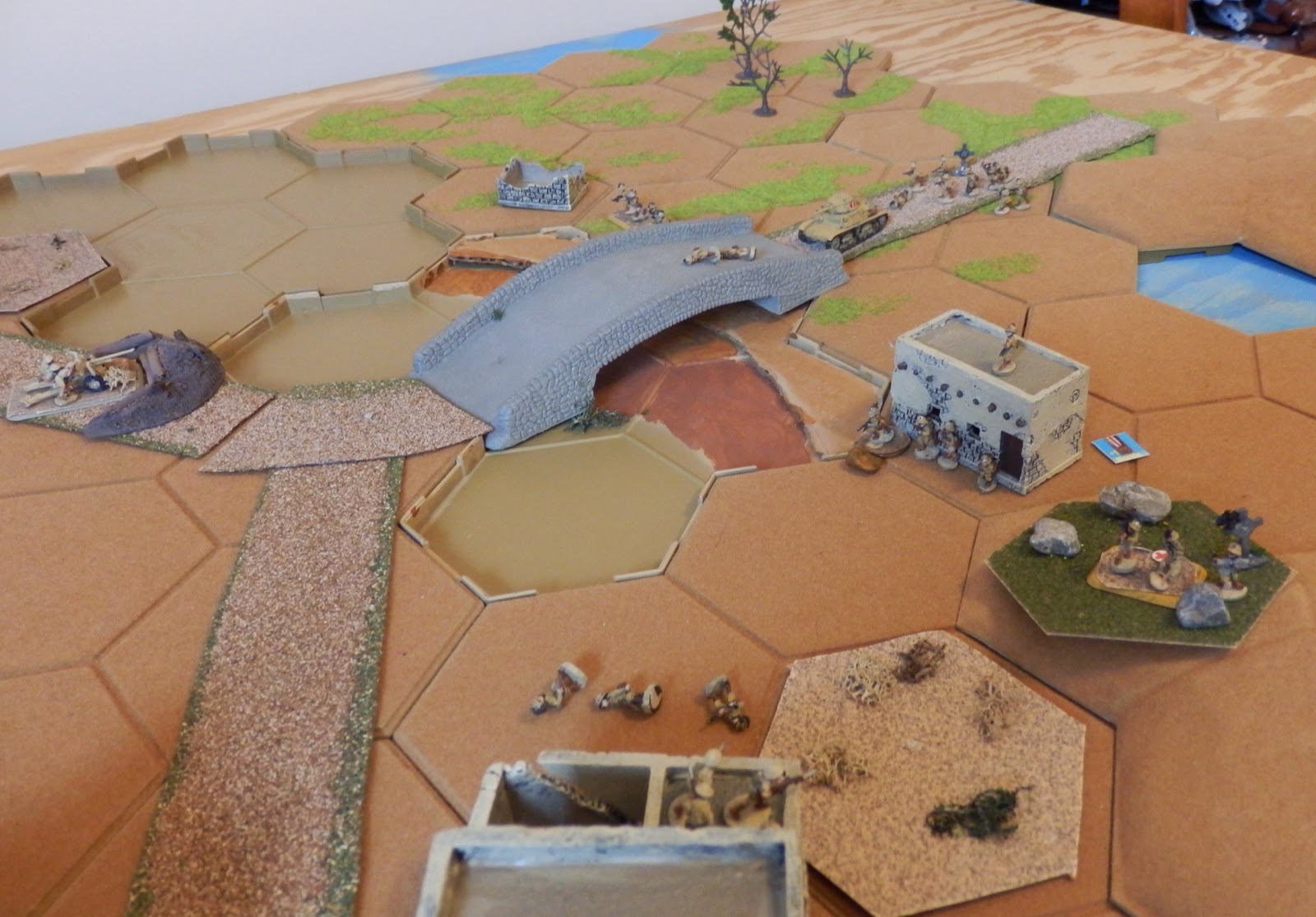 Meanwhile Sgt Barnes close assaults the LMG  (took some rule writing.  How many dice does a LMG get?) Two Italians fall and the other two flee with their officer.  Sgt Barnes loses no one.  The Italians lick their wounds.

Maj Barnes is annoyed that 3 section has not moved.  (Bad card draws.)  He decideds to go have a word with young Cpl Crocket. 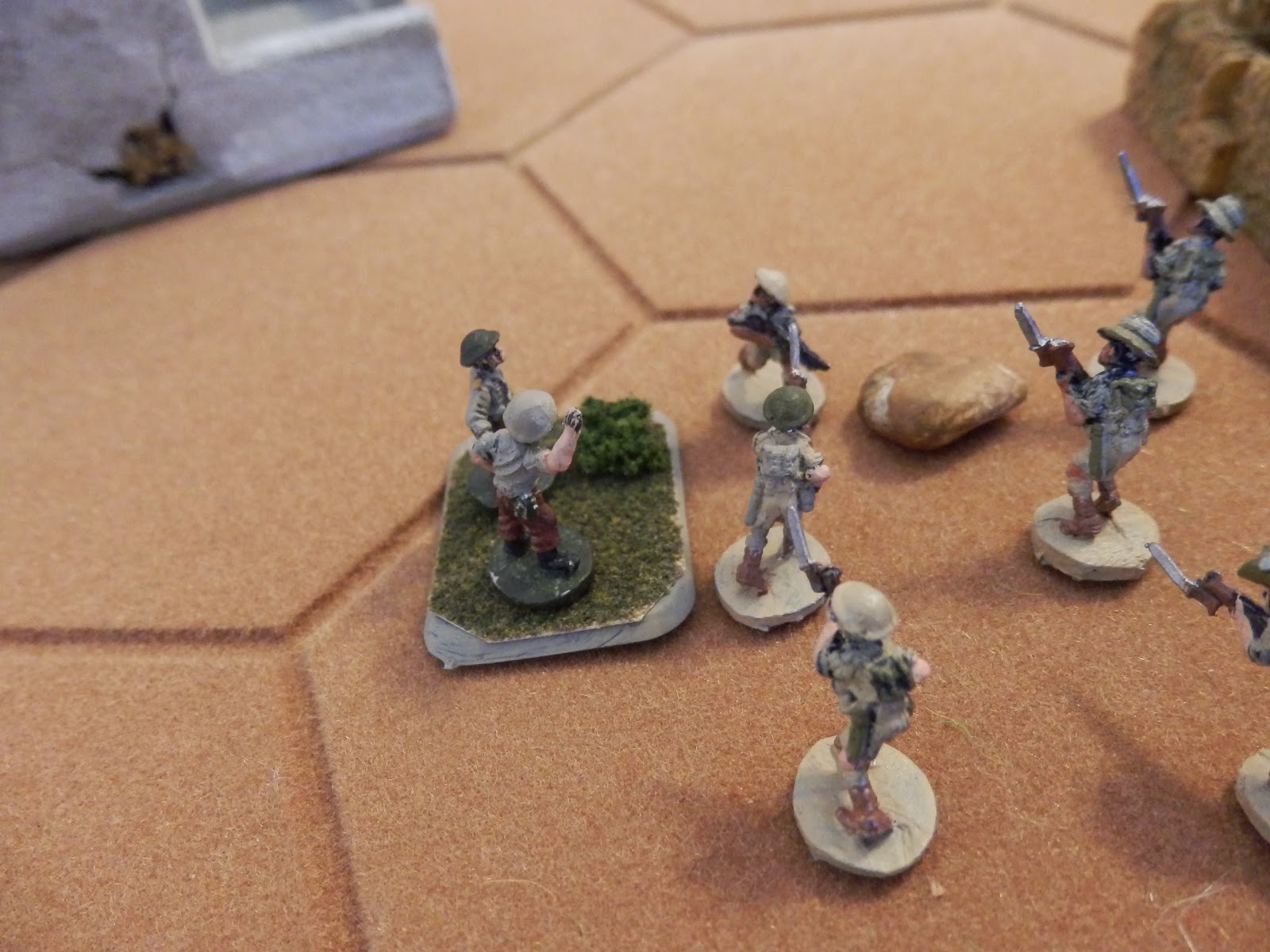 More frightened of the Major then the bullets the men respond. 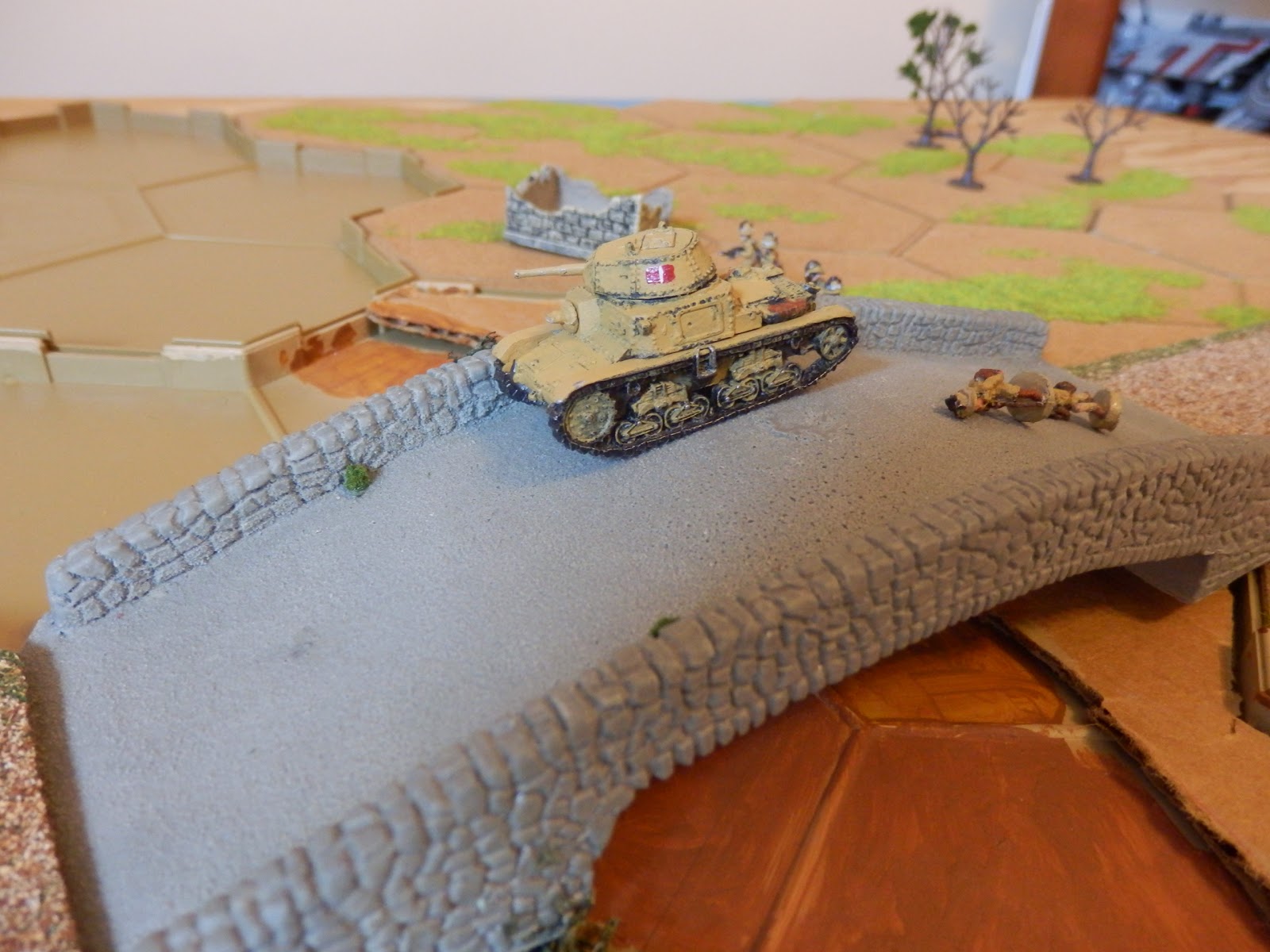 The Italians start one last push! 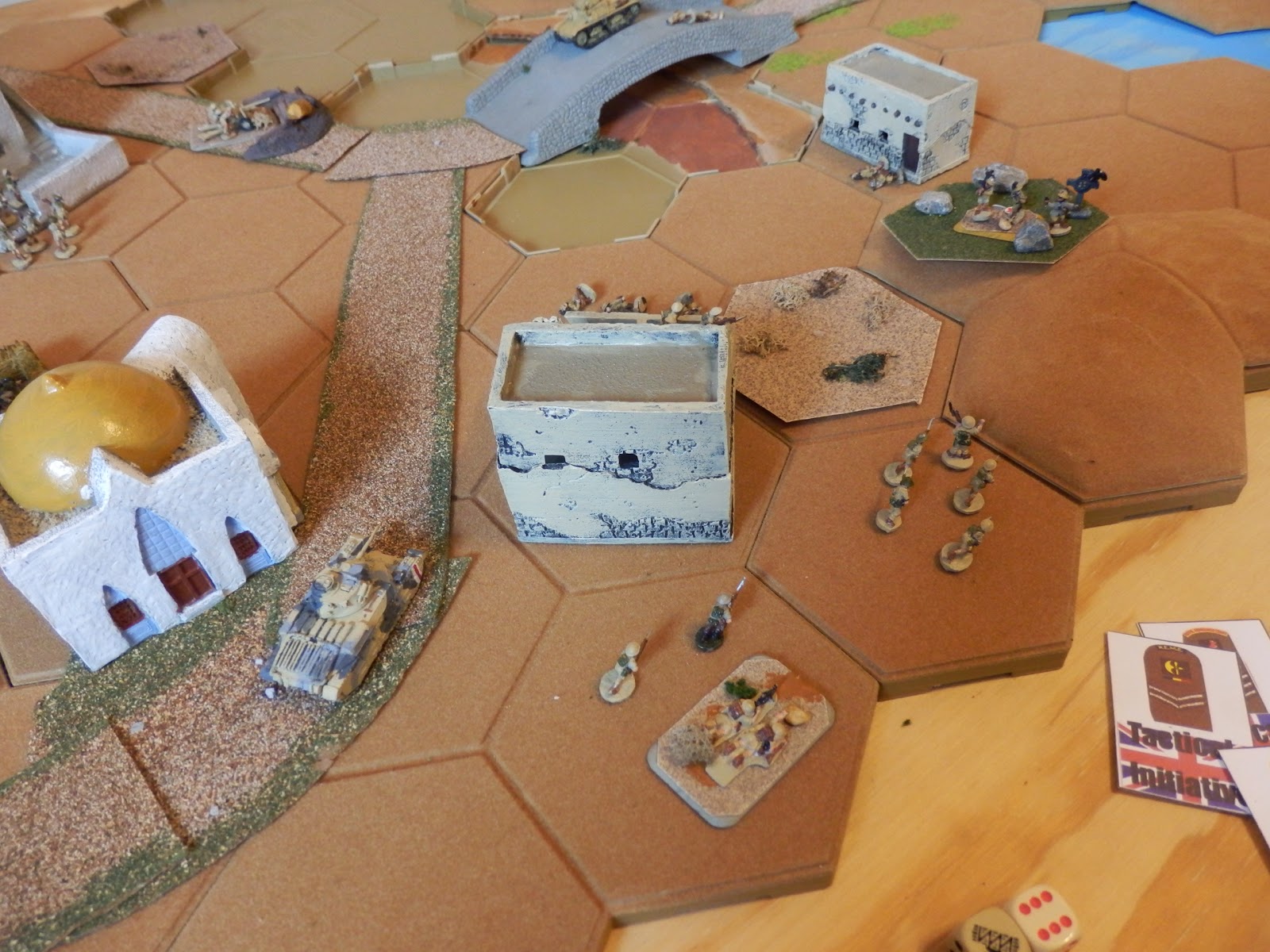 The two tanks exchange fire.   The Italian shell bounces off harmlessly.  The Matilda misses.  SLt Audley orders 2 section around the right flank to mop up the Italians. 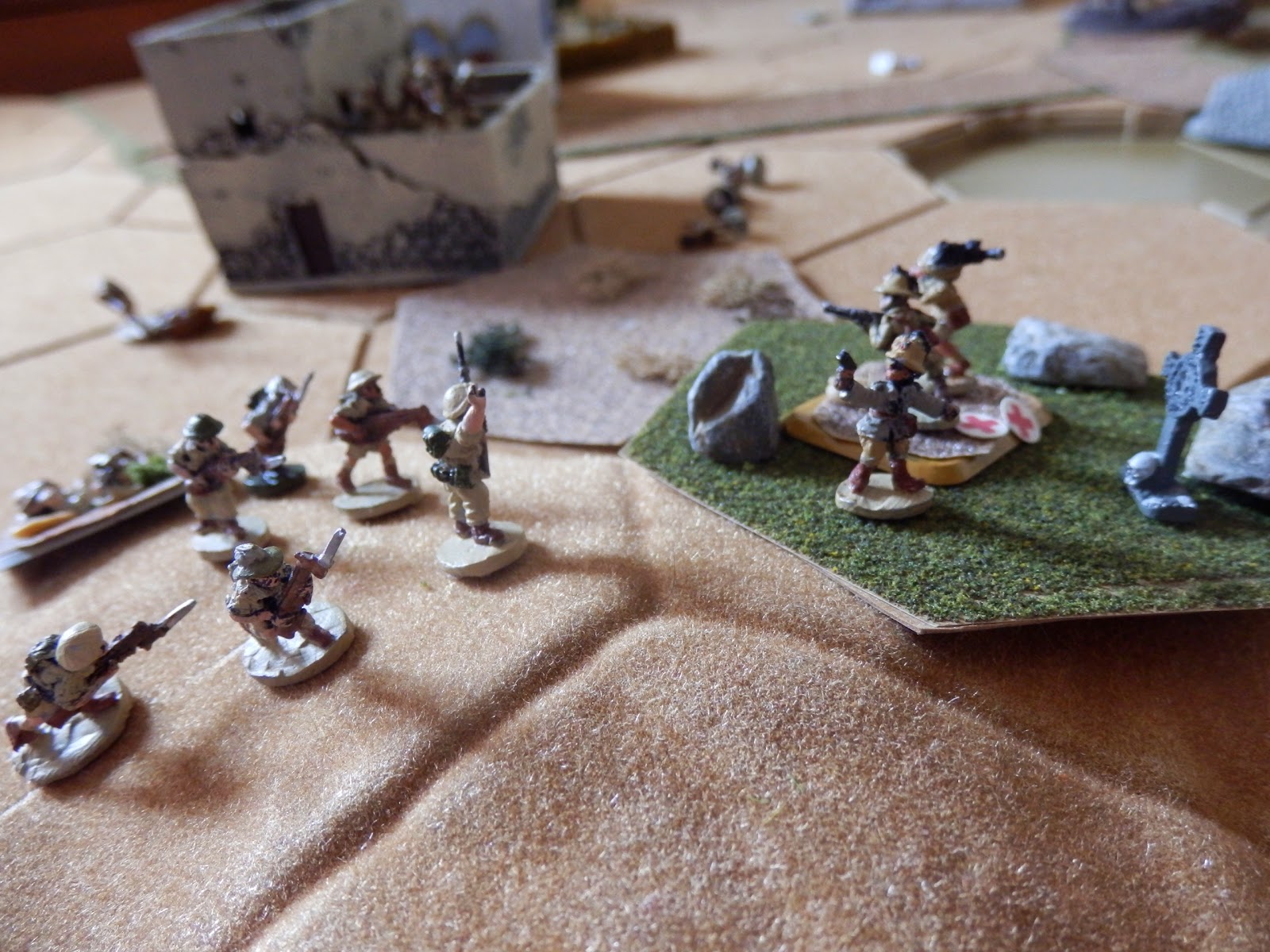 Egg moves up the hill and the disrupted team (celtic cross marker) leaves before he can engage.
With that the Italians leave the field.

Short game that was pretty one sided.   The Italians rolled horribly.  Donnybrook worked well and it was fun.   Post game Maj Barns was upset with Joey Crocket but did not sack him (yet).  The morale of 3 sectin stays bad.   Joey goes and gets himself sick (as a skirtchaser maybe VD?) and will miss the next mission.  Will have to have a Pvt lead the section.  If he does well that will probably be the end of Joey.