Sorry for the long delay between posts.   We are getting ready to leave England so doing as much final traveling as we can!   Last day on the island is 3 July then back home to Virginia!  Have really enjoyed it here and will miss the people and the history.  Will not miss the weather or the cost of living!  [ weather has been gorgeous this last week though]
Have played one game of Donnybrook, one of WW II Donnybrook and two of Release the Hounds with Flotilla Forward.  Release the Hounds is done as my new 2D6 system works well with big ships including cruisers.   Flotilla Forward continues to mature as well.  Here for your reading pleasure is my last RtHs.

Cdr Clarkson was daydreaming in his cabin aboard the HMS Juno when a message came in.  His CO, Capt Rawling, wanted to meet him aboard the HMAS Australia in 1 hour.  " What the devil could this be about?
" he wondered.  The Captain had complimented Clarkson on his handling of the Juno the week before when the flotilla had run into 4 Italian DDs.  Could this be something exciting?

An hour and a half later they were ushered into a conference room aboard the Australia and all was reveled.  The war was not going well for the Anglo-Greek alliance on the mainland.  As a precaution,  some national treasures (and people) were to be loaded onto the HMAS Australia tomorrow and taken to London for safe keeping.   This was to be a quiet operation for fear of the morale affect.   Two destroyers were required to accompany the cruiser for protection.  Capt Rawling had selected Cdr Clarkson to be the destroyer SO with the Juno.   Clarkson was delighted with the news!  Cdr Smith in the Jersey was senior to him and should have had the assignment.   He couldn't wait to tell him.


[  I rolled up a special scenario that was a "transport mission  with 1 additional ship added."  That was the genesis for this scenario!] 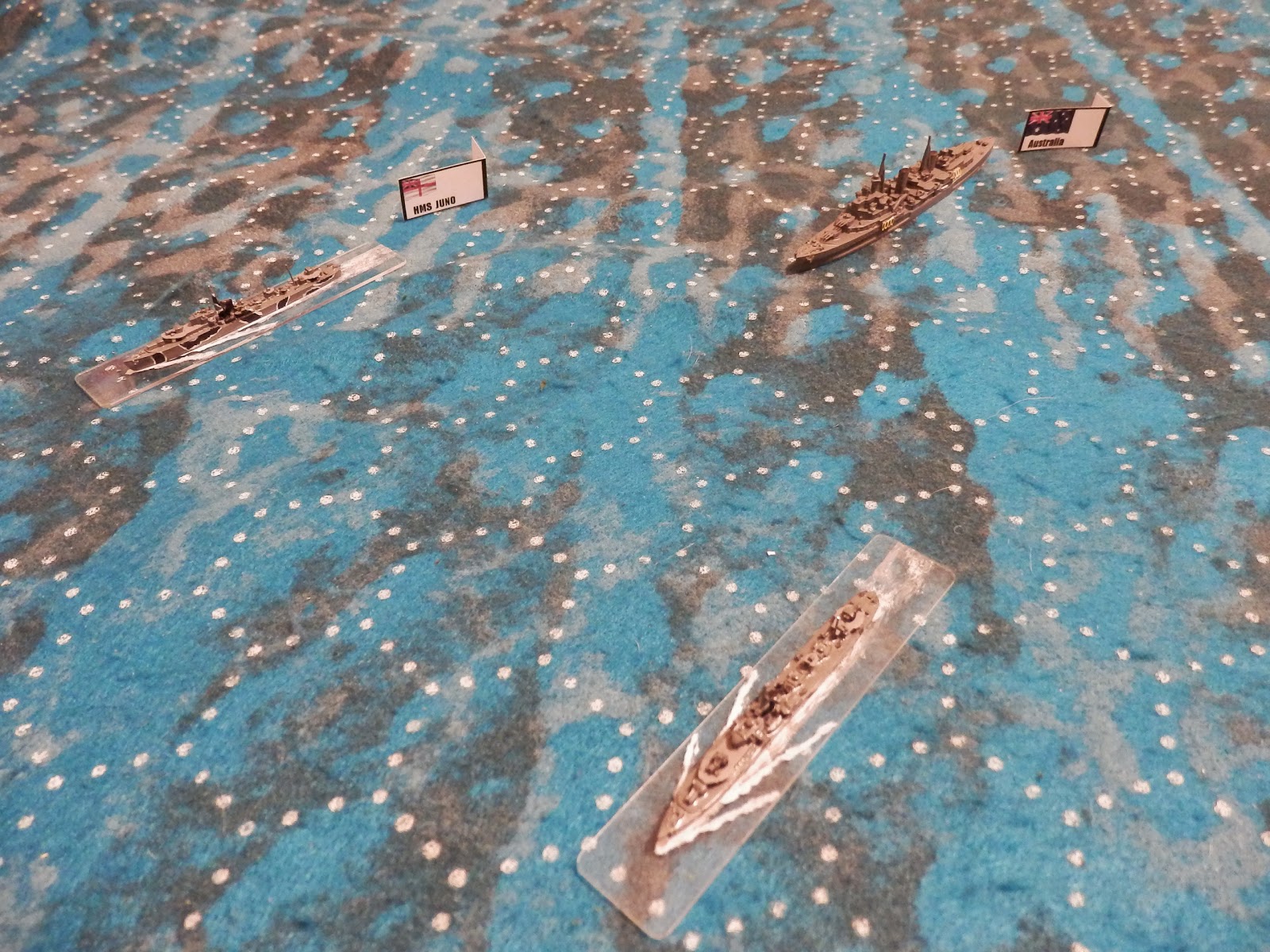 The British force moves out!! 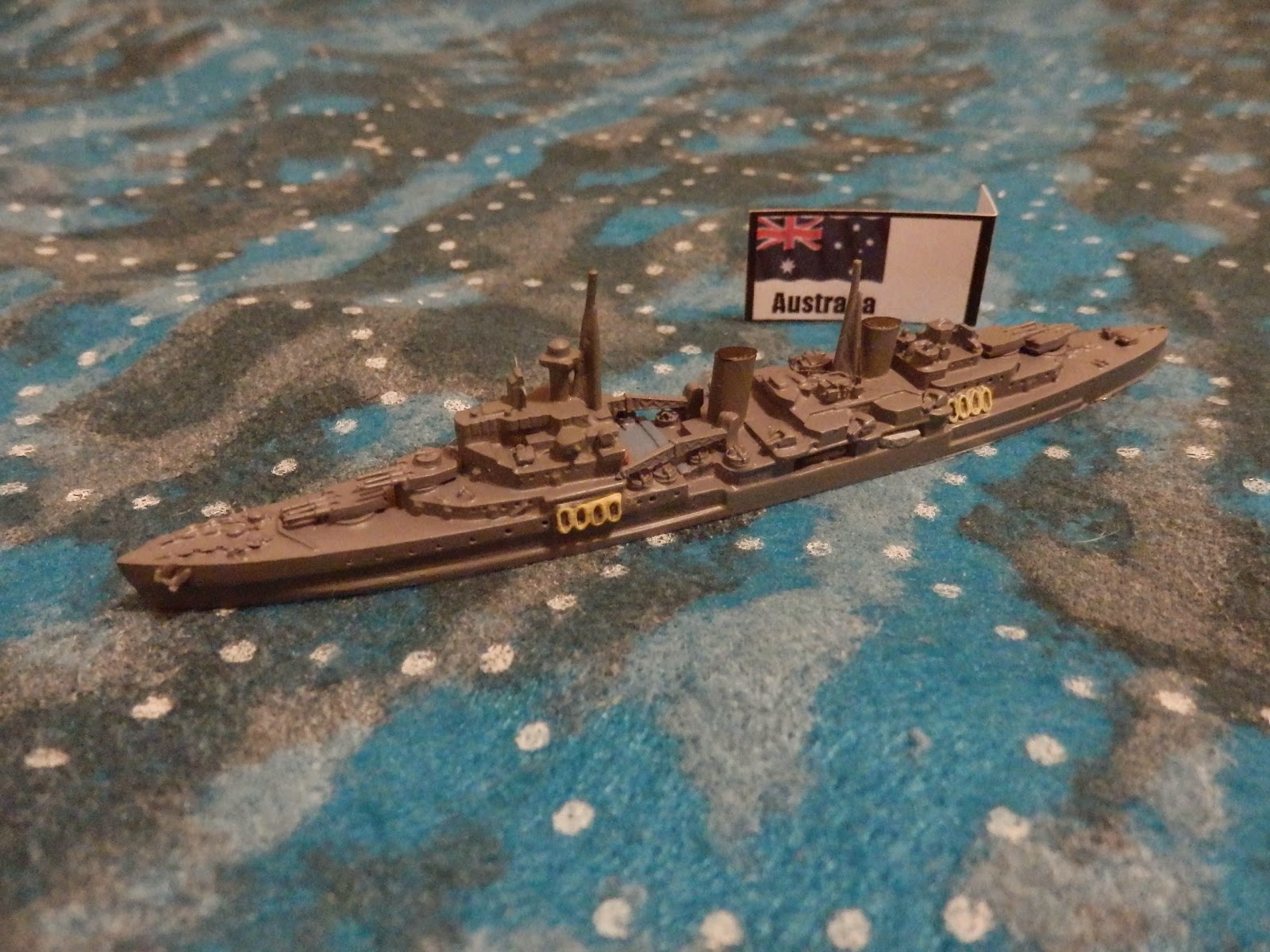 The British load their cargoes without interference [60%] and sail west. The Australia is having trouble with one of her propellers and can only make 25 knots max. [ cool random pre game event!]    That night LtCdr Anston picks up 3 ships 3 miles straight ahead on radar.     The Capt orders a hard turn to port to avoid the contact. 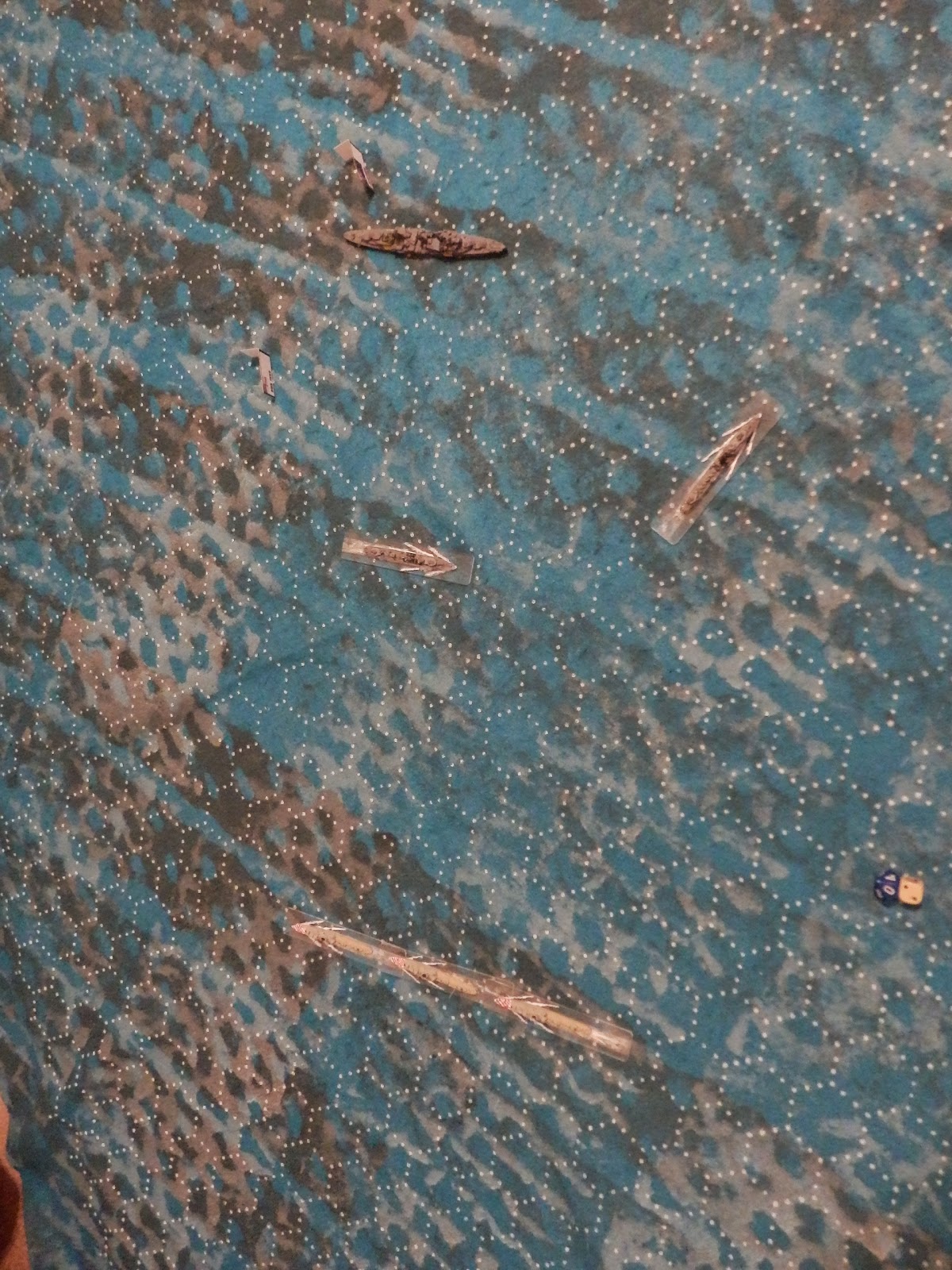 Visual contact made between the HMS Juno [center] and 3 Italian DDs at just under 2 miles.
The Capt orders Ldr Clarkson's DDs to engage enemy while HMAS Australia disengages.
This leaves the Juno against 3 Italian DDs while the Jaguar moves to position.
Clarkson fights with fury and heavy damages the lead Soldati class DD but the Juno is damaged in return.  He fires 5 torpedoes but they miss.  He turns away after the Italians fire their own torpedoes but one hits home at the stern.  The engine room is destroyed and the Juno is doomed! 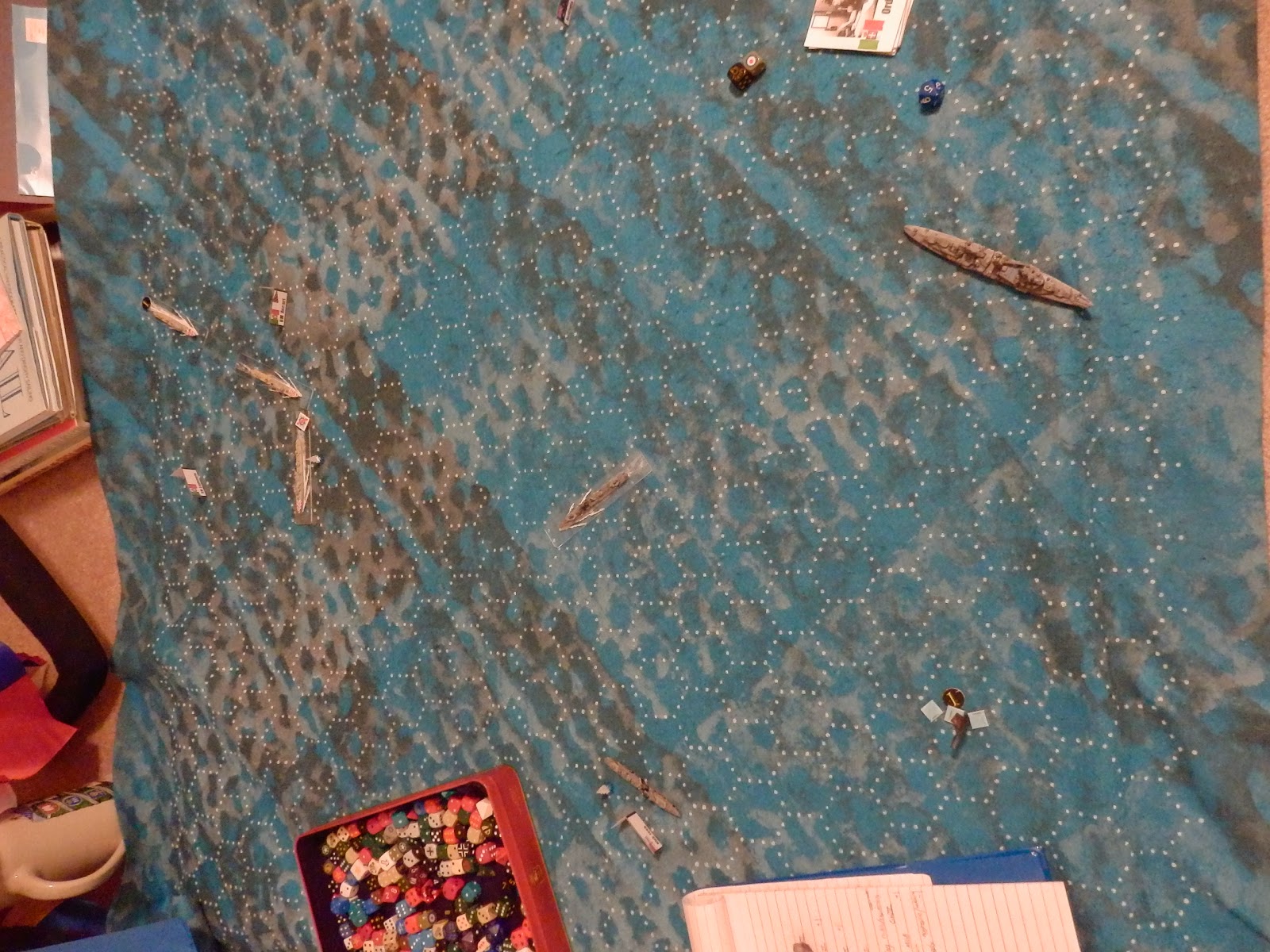 Jaguar center moves up to engage the Italians on the left.  The Australia opens fire thereby subjecting itself to fire.  The Juno [bottom center] starts to sink. 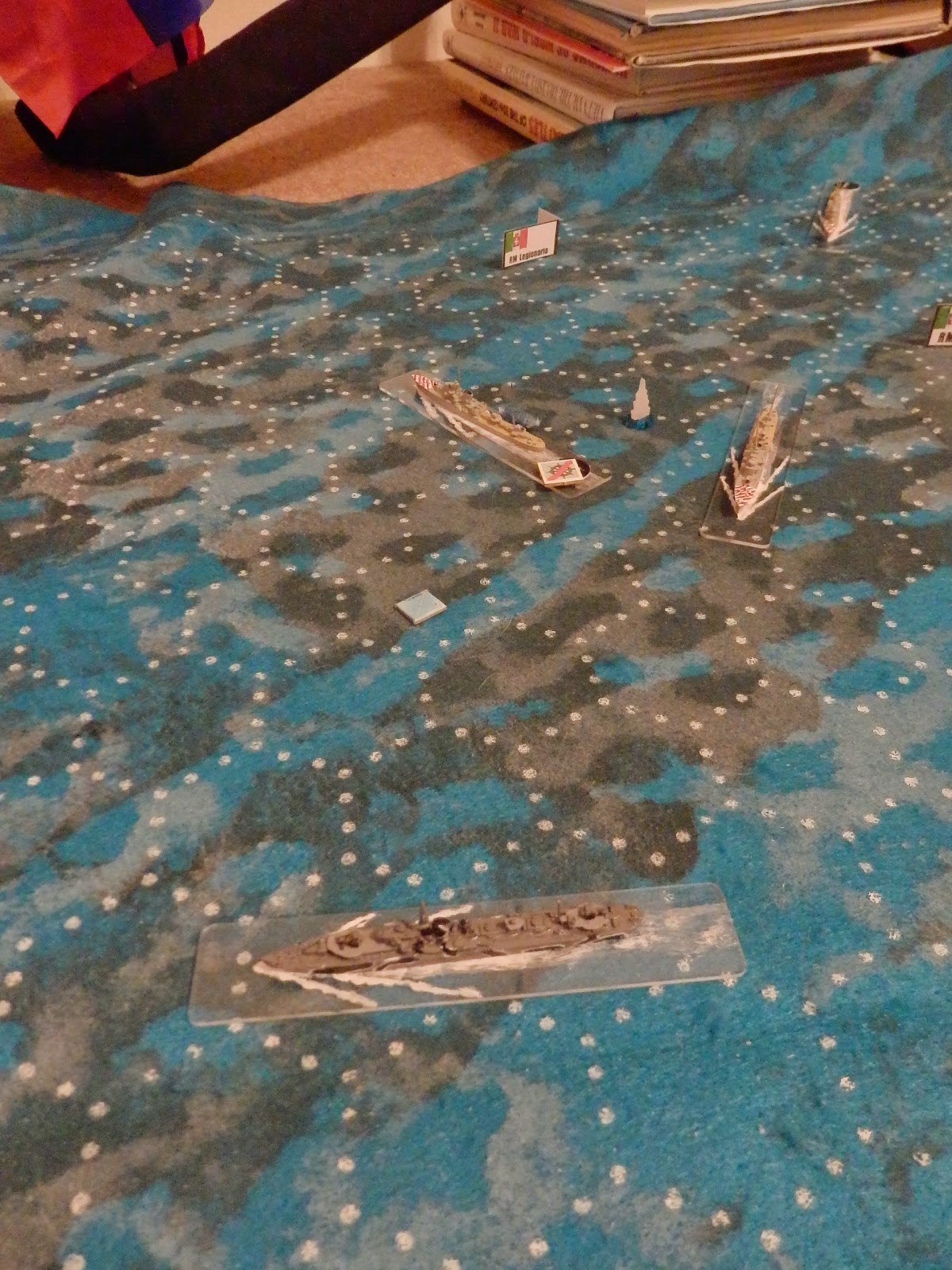 The HMS Jaguar takes on the Italians!    5 torpedoes launched at a Soldati class DD.   One hits home and LCdr Anston evens the score with the Italian starting to sink.

HMS Jaguar tangles with the two Italian DDs while HMS Australia lends support while retreating away.  The damage starts to mount and Jaguar's steering is damaged. 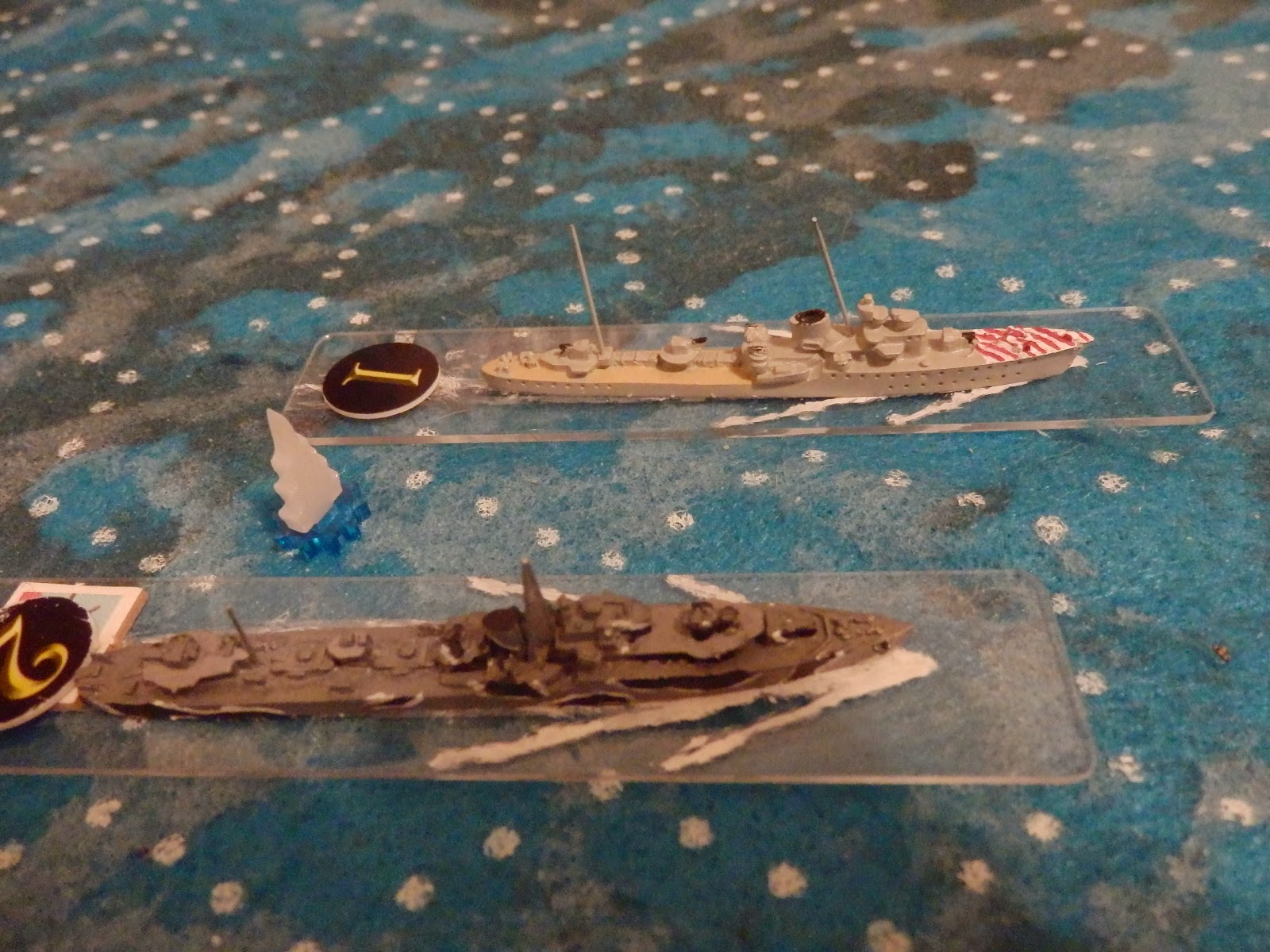 Toe to toe with Eitey!!
[  In RtH there are 4 classes of damage-  1- damaged. 2- Heavily damaged 3 Wrecked and 4 sinking plus a myriad of critical hits.] LCdr Anston fights to give the Australia time to flee with her valuable cargo.  The Italians line up for torpedo runs on the CL.  As you can see the Jaguar is now wrecked. 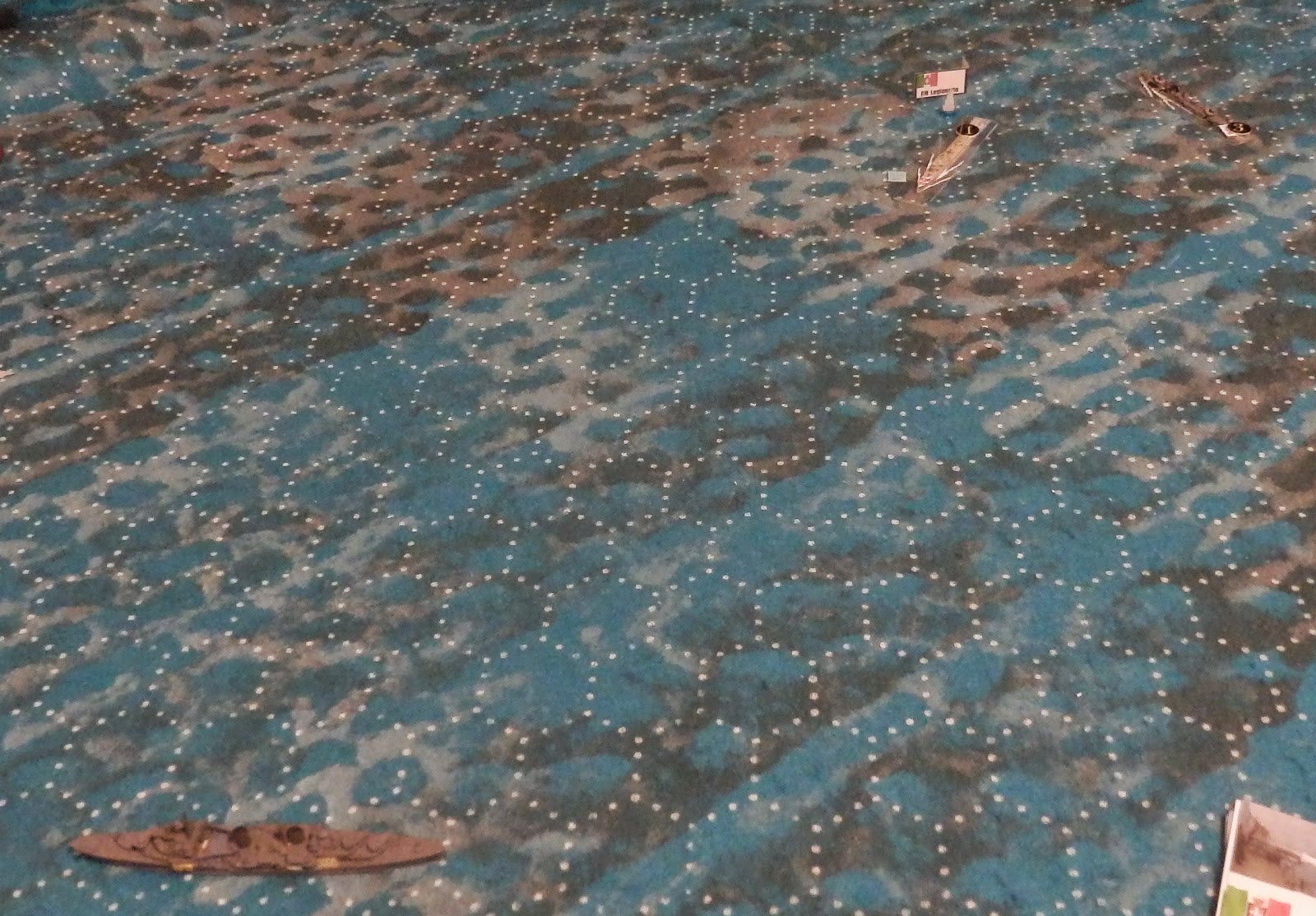 The last 3 torpedos are launched!  Each hex for this game is 333 yrds as opposed to 200 yrds for my coastal games.  The world holds it's breath ( well okay maybe not the WHOLE world) and they miss. 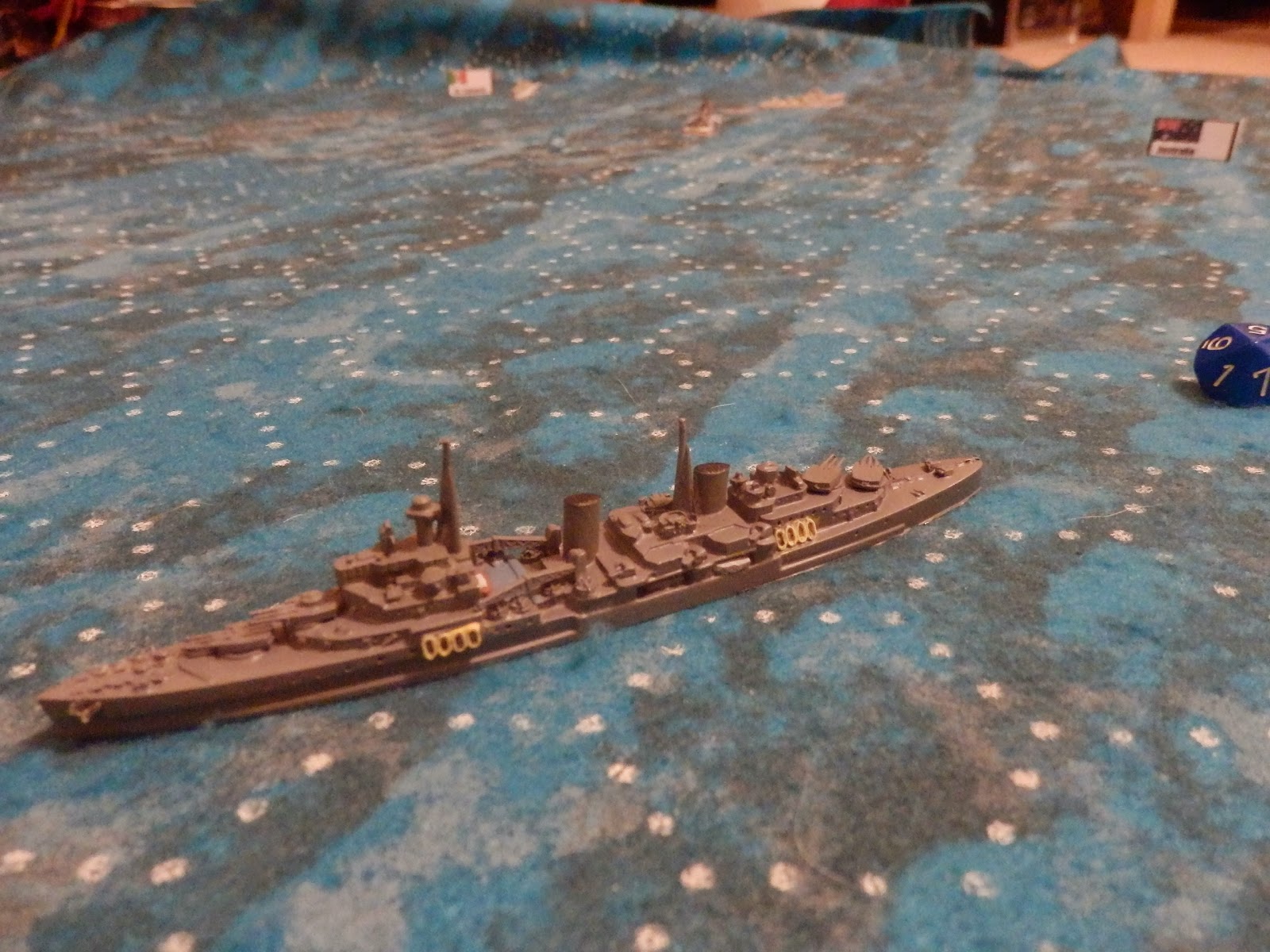 It is clear now to the Captain on the HMAS Australia that they are facing 2 Italian DDs.  It is also clear that HMS Jaguar is in trouble.  He does not know if the Italians have any more torpedos.  He also doesn't know if there are any more surface forces lurking about.  He also must make time before daylight and axis aircraft appear.   But to run from two DDs and leave Jaguar?    Decisions decisions!   What would you do?  I decided that almost any british captain would fight.   The next turn I rolled a wonderful random event called "independent action".  Here one of your ships takes independent action within certain parameters.  I rolled on the table, added my modifiers and got " open distance to the enemy".   Wow; there was my answer.  So the HMAS Australia pressed on with the mission and the Jaguar sucomed  to gunfire.
Great game with an interesting ending.   Post mission I rolled on the AKOT table and the Admiralty found the Captain had done the right thing.  Capt Rawling felt otherwise.   Cdr Clarkson and many of both ships were picked up the next day by Italians and taken POW.   LtCdr Anston was unfortunately Lost at Sea.

LCdr Jewett of the damaged HMS Jackal managed to tick off the chief of maintenance, Lt Rocker, so his ship is not ready yet.  The squadron loses another reputation point since they lost two DDs to the Italians 1.  Due to their acute shortage of ships the Admiralty sends them the HMS Kingston, LCdr Walsh commanding.  Should be interesting!

Posted by FlightDoc at 1:47 PM