Still tinkering with Rifles Forward.  ( It doesn't help that I still haven't found my osprey collection.)  After a discussion on TMP and remembering my Ospreys I have decided to go with a half company (or platoon as it was called) as my base unit.  This will give me about 30-40 troops.  Of course the rules will play fine with a whole company but that would be an awfully lot more figures to paint!  I have decided to take the half without the company commander so in America Lt Fish will be leading.  If you need to read what happened to theses guys it is only 2 posts down.

It seemed like a simple assignment; collect 3 carts of food and escort them back to camp along Briggs road. Lt Fish figured around 15 troops would do along with Sgt Turner.  There had been reports of increased Tory activity in the area and one group was well trained and led by the former British governor's son. 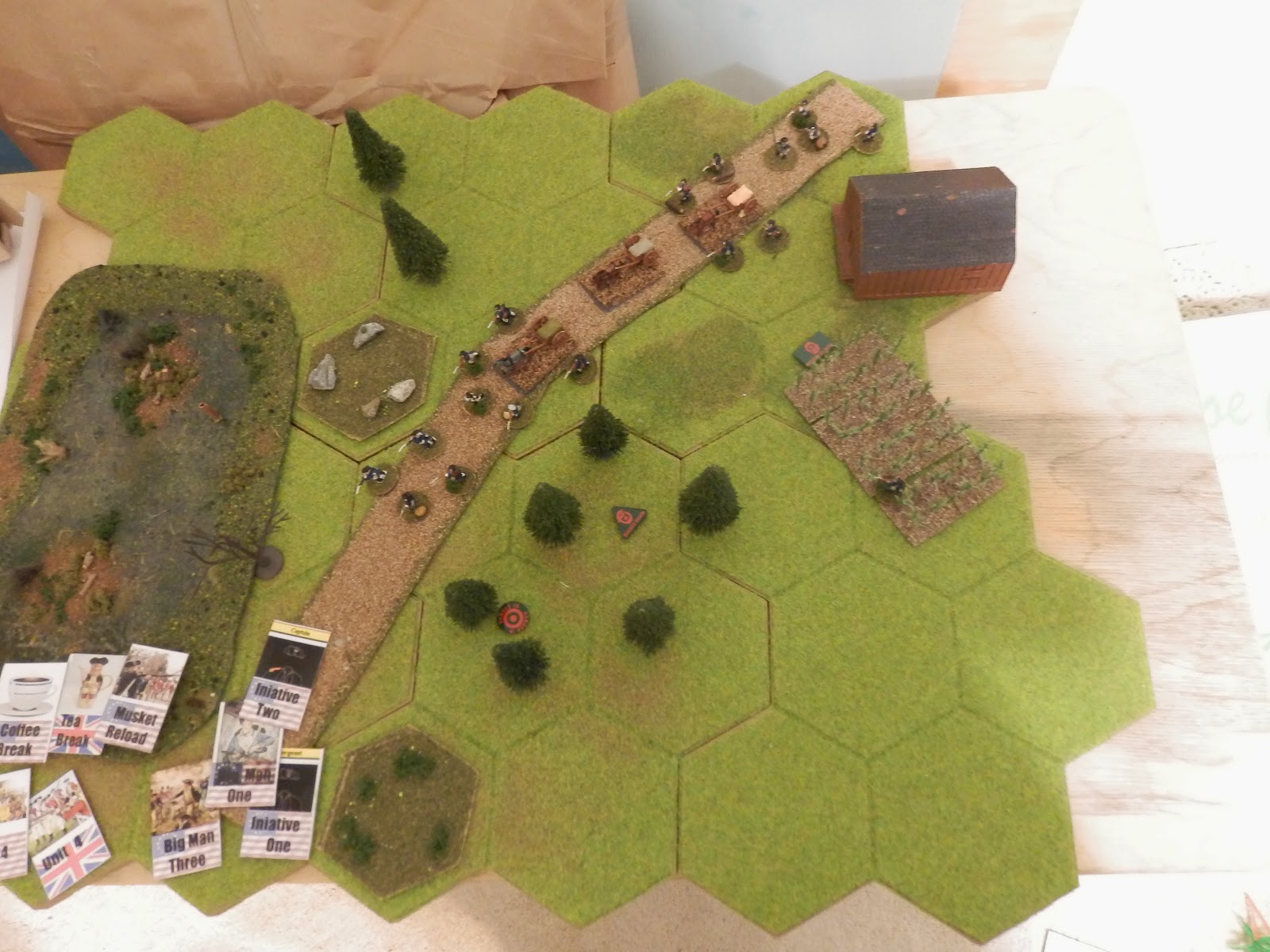 The platoon plods down Briggs road.  The markers are british blinds.  Also note my new swamp and cornfields from Wargamer's terrain.  I was so pleased with my roads and rivers that I bought these.  The corn is the best I have ever seen! 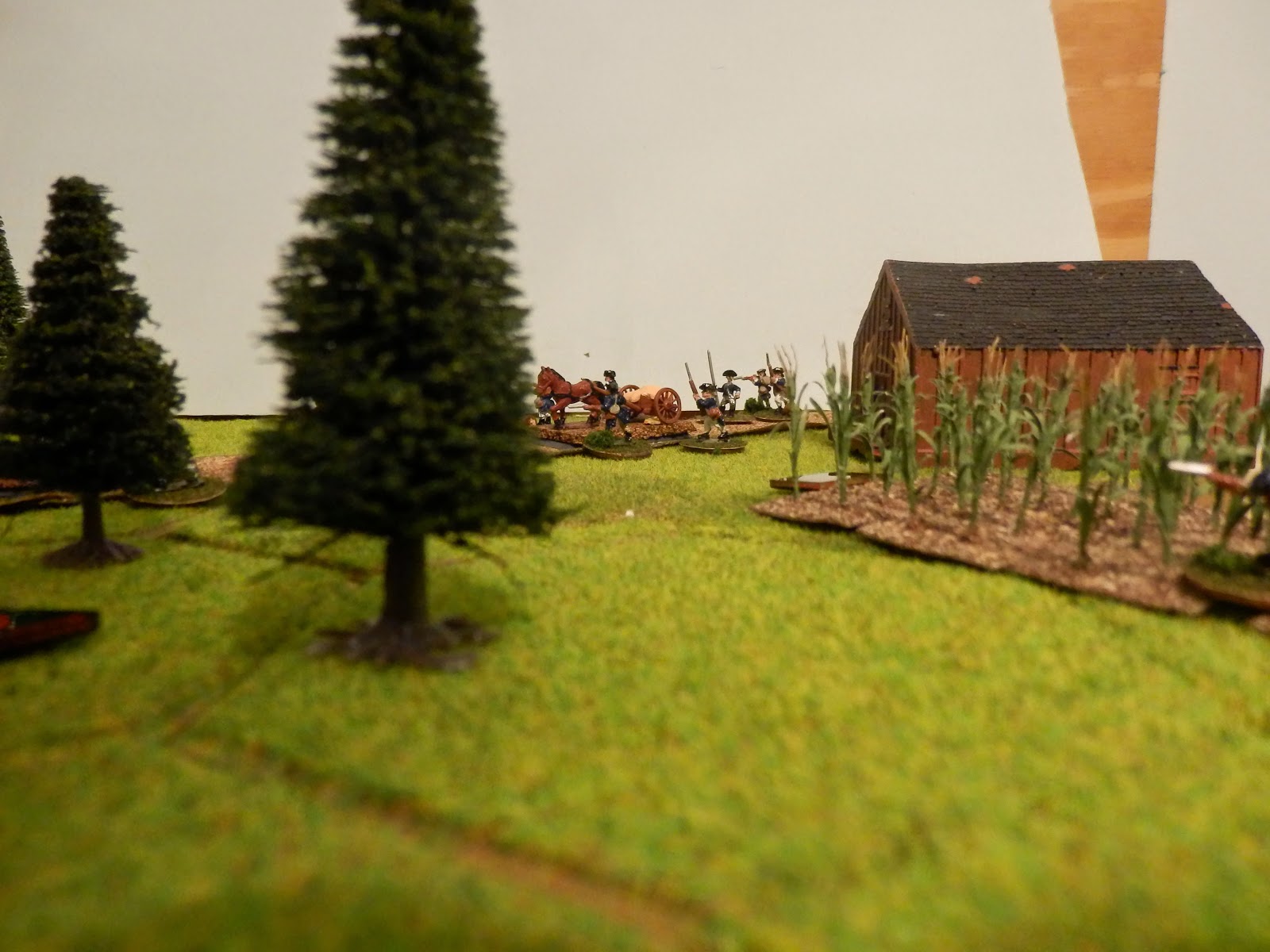 Back of the column.  Doesn't that corn look ready to eat? 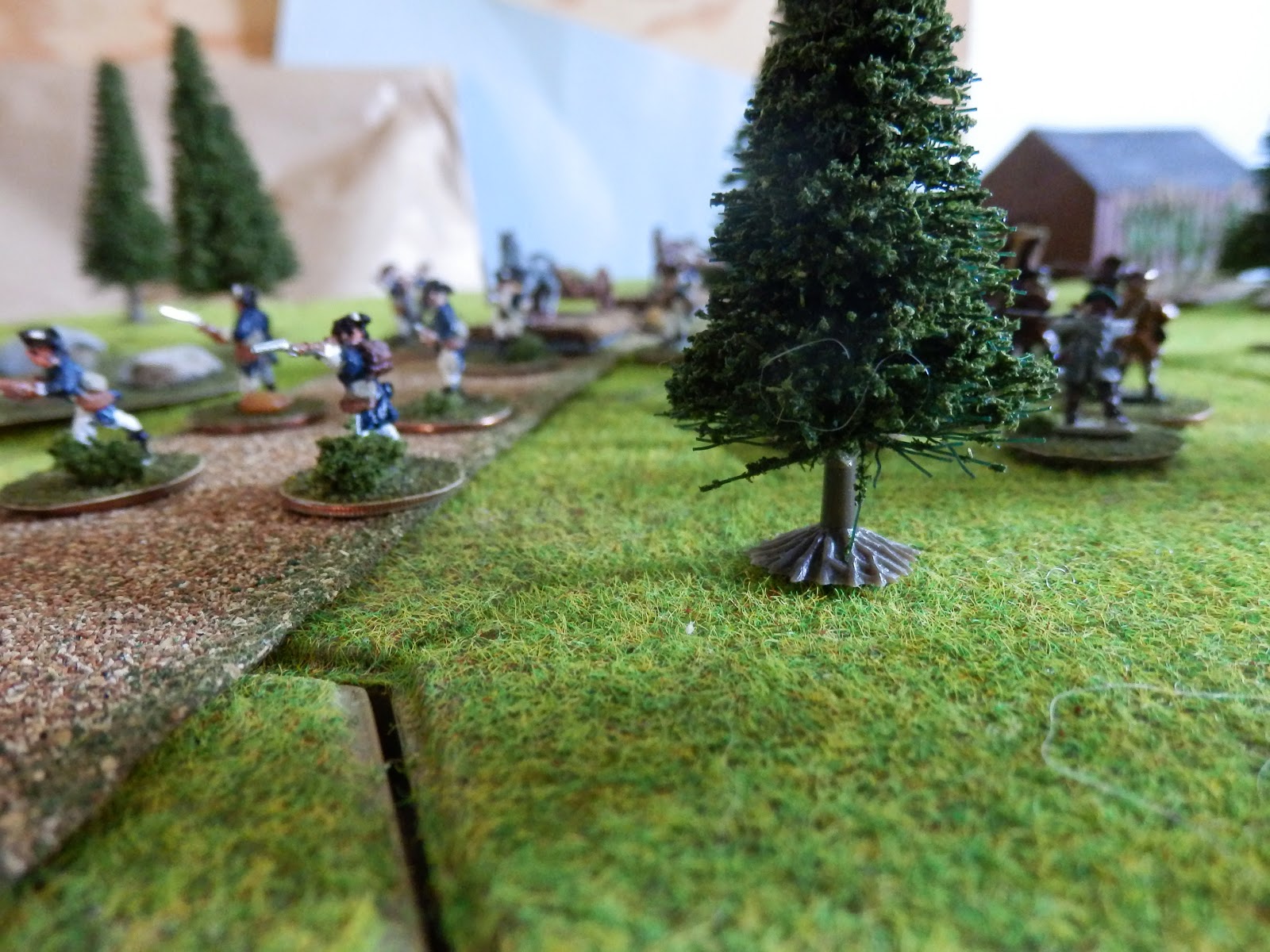 Lt Foster's men fire at the front half of the column achieving surprise.  Lt Fish and two other men go down.  Within a minute Lt Fish is up waving a bible with torn pages that stopped the bullet.  " Good thing I already read it!" he says.  [ Recovered from an unconscious result ] 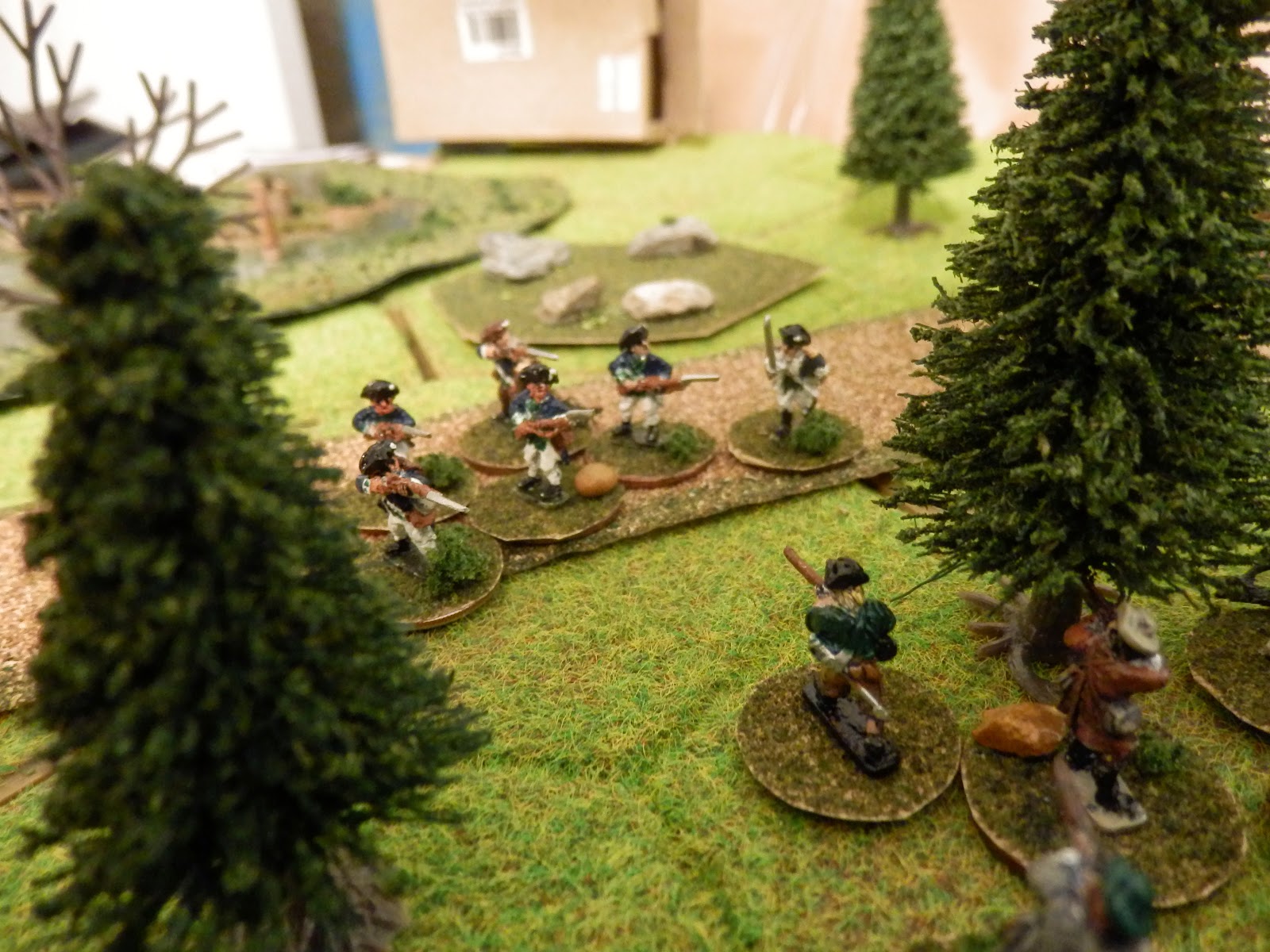 Lt Fisher forms a firering line but the Tory's are in deep woods and at short range the revolutionaries quickly draw the short stick. 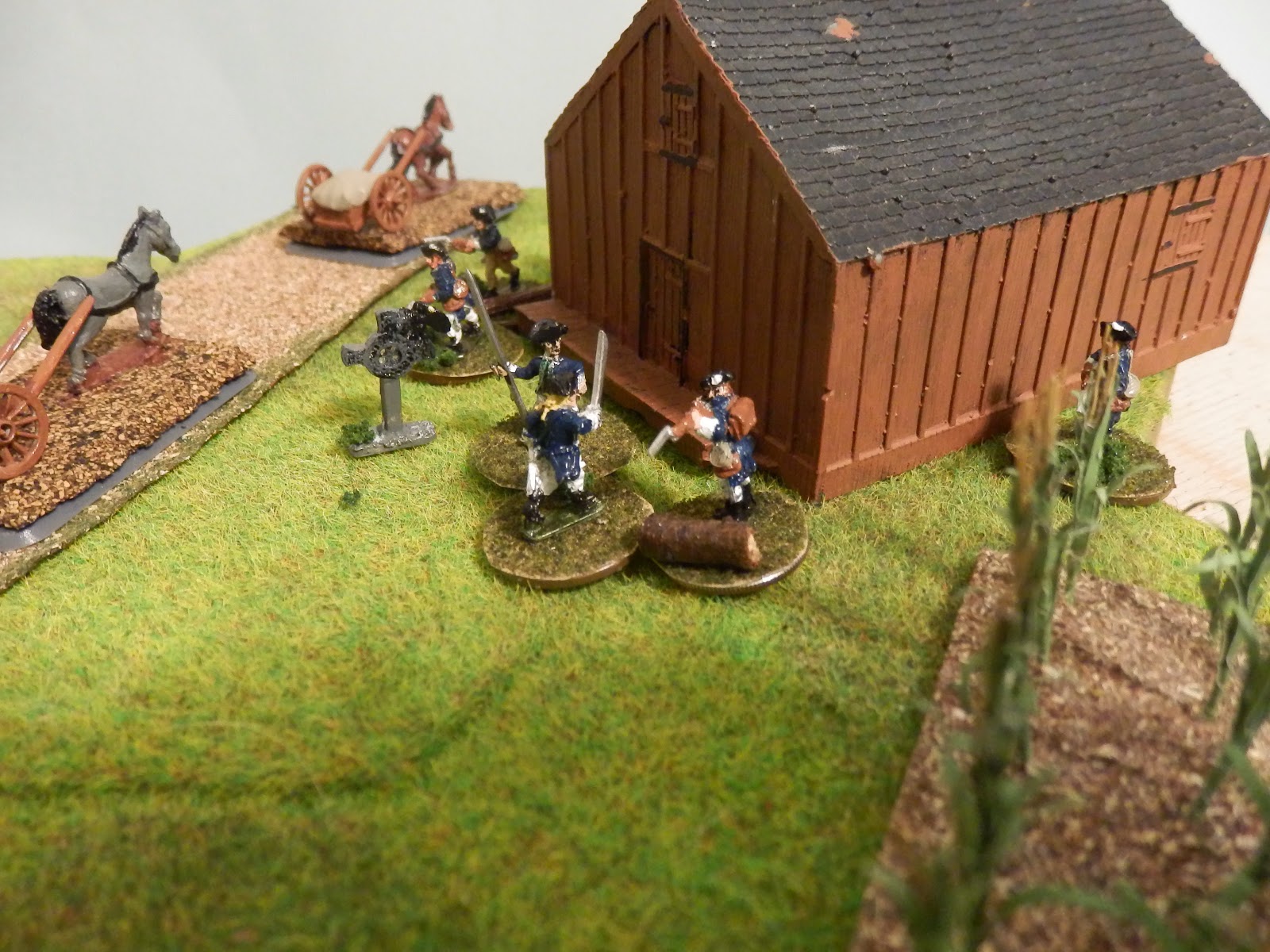 Meanwhile a couple of musket shots at the rear of the column was enough to have Sgt Turner and men in disarray.  [ note celtic cross marker and wagons trying to retreat ]  Lt Fish comes over to rally the men in the barn. 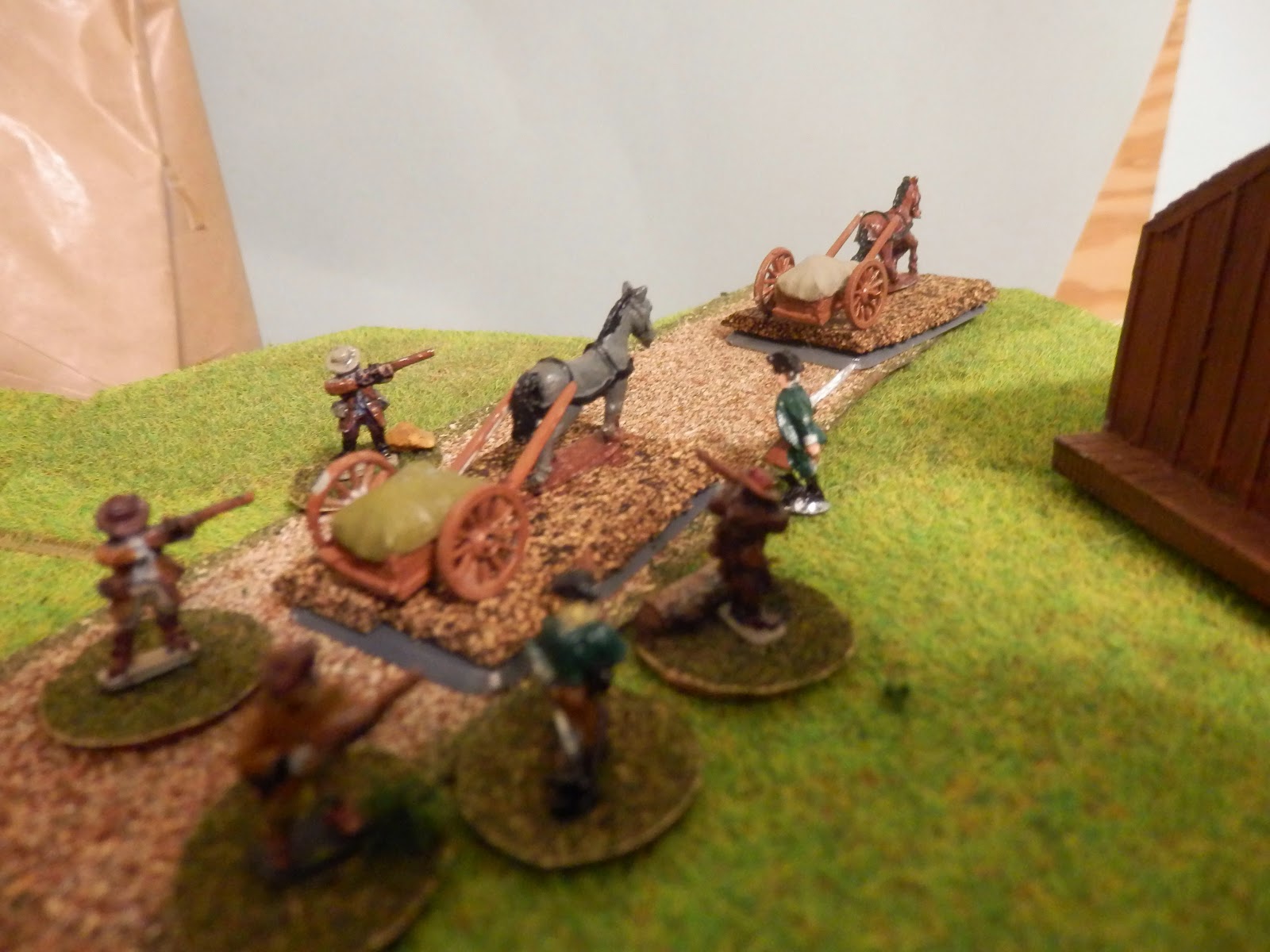 During the events above Lt Foster [ stylish green jacket] and several Tory's manage to capture a cart.  As they are trying to steal a little food and set fire to the rest... 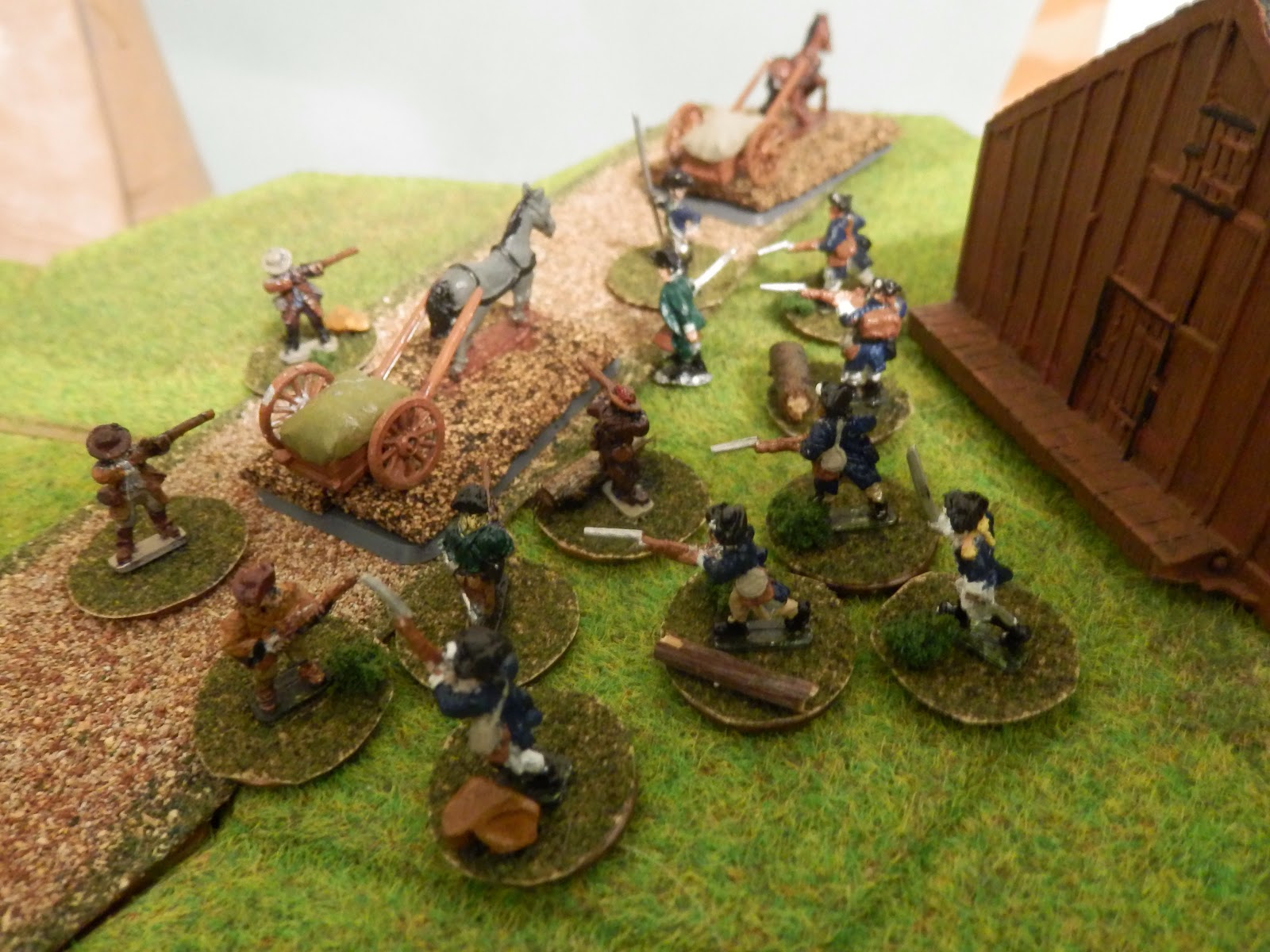 With renewed enthusiasm Lt Fisher's men burst from the barn to take the Tory's down.  Sgt Turner actually confronts Lt Foster but Foster manages to parry the blows.  Both sides lose two men.  Lt Foster realizes that to stay risks the rest of his small force and ... 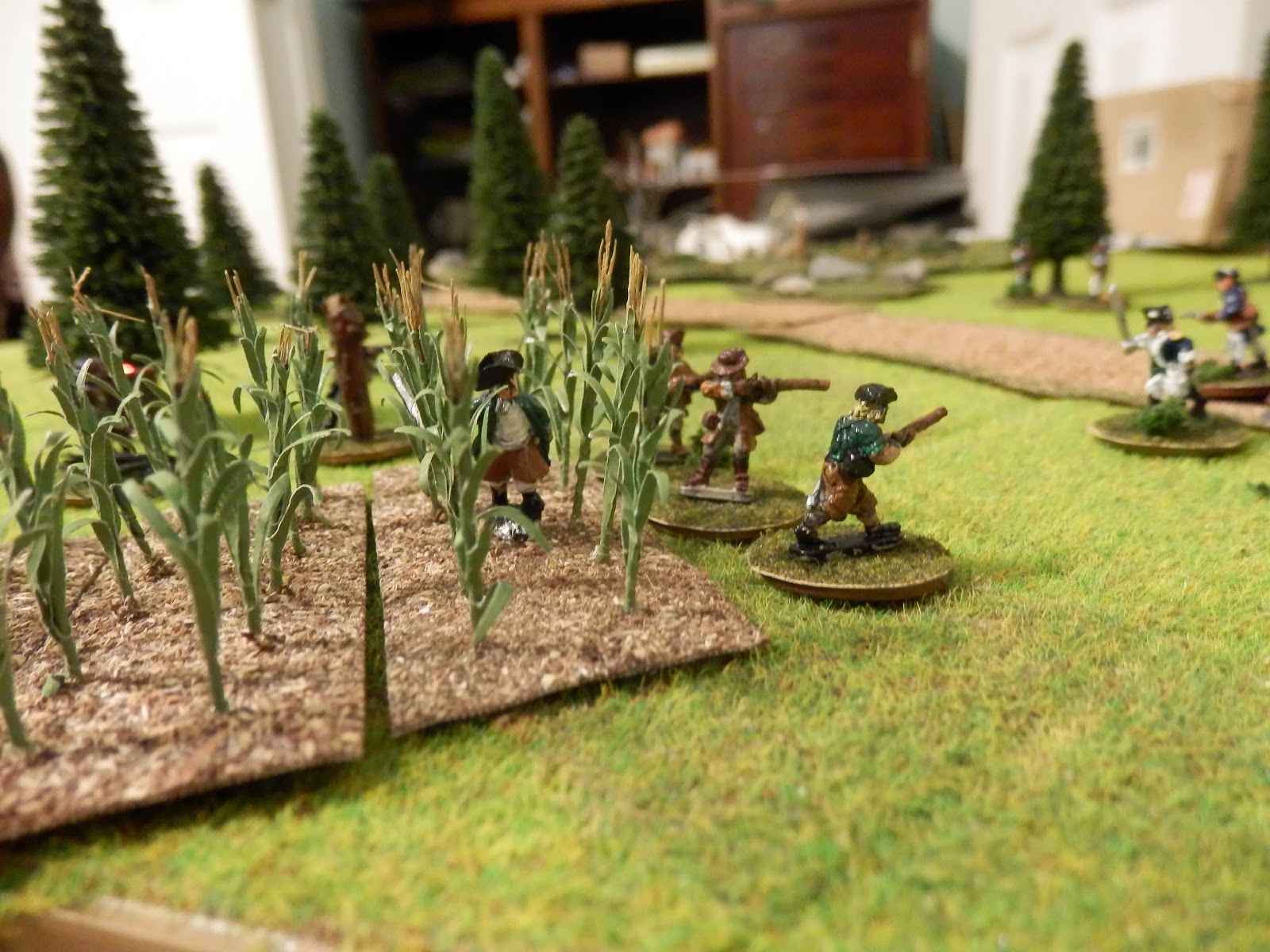 escapes through the cornfields.  [ Don't they look great! ]

I declare it a victory as none of the carts were destroyed but 11 of the 16 rebels are hurt.  Fortunately 5 are lightly wounded and return.  With a lucky die roll the other 6 will be replaced by next battle.  Sgt Turner performed terribly and earns a "hesitant" card.  Capt Madison is impressed with Fish and Madison's attitude towards the platoon increases by 1.
It was a great game and really showed the leadership rules off.  Both officers kept things moving and Turner could not.

For those of you that want to play Foster had 9 drilled men with him.  [ they only took 3 casualties ]

Posted by FlightDoc at 6:20 PM