Well I have (more or less) successfully moved from England back to the USA.   We are in the house and the computer is set up.  Did spend a month touring Europe first.  During our train rides and the plane rides I managed to write a rough draft of "Rifles Forward".  It has some new stuff in it which I am pretty excited about.  It has expanded the backgrounds, added "arch enemies" and now you see how many replacements you get after each mission.

Have been dying to try it out and finally got my chance yesterday.  So without further ado


The cannon on the Schuylkill

Rolled up a raid scenario on a cannon.  So...

Col Rose spoke to Capt Madison.  "There are several cannon overlooking the ferries.  We need to keep wearing the British down.  A raid to destroy one of those cannon accomplishes both"  With those words a dawn strike was planned for Capt Madison's company on a lone cannon towards the end of the ferry.

Capt Hank Madison-- Pharmacist from a town in New Hampshire.  Very pragmatic with an eye towards wealth.  Even tempered and a poor swordsman.  A good leader of troops though.  ( Lvl 2)

Lt Elisha Fish-- Son of a banker who bought his commission.  Liked by the men because he is always cheery and a good leader on the battlefield. (Lvl 2)  He is even tempered and yearns to advance through the ranks with glory.

Company Sergeant Johnathon Towers--- Was a barkeep before the revolution.  Has a haughty attitude to those below him and loves his position.  Thus he is disliked by the company but it a good man to have around in battle (Lvl 1)  He has a reckless temperament.

Sgt James Turner---Was a animal rustler before he joined.  (The town was glad to be rid of him)  He is pragmatic and has found his way in the army because he is cautious when sober.  His leadership skills are mediocre. (LvL 0 )

The above was made with the charts found in Rifles Forward. 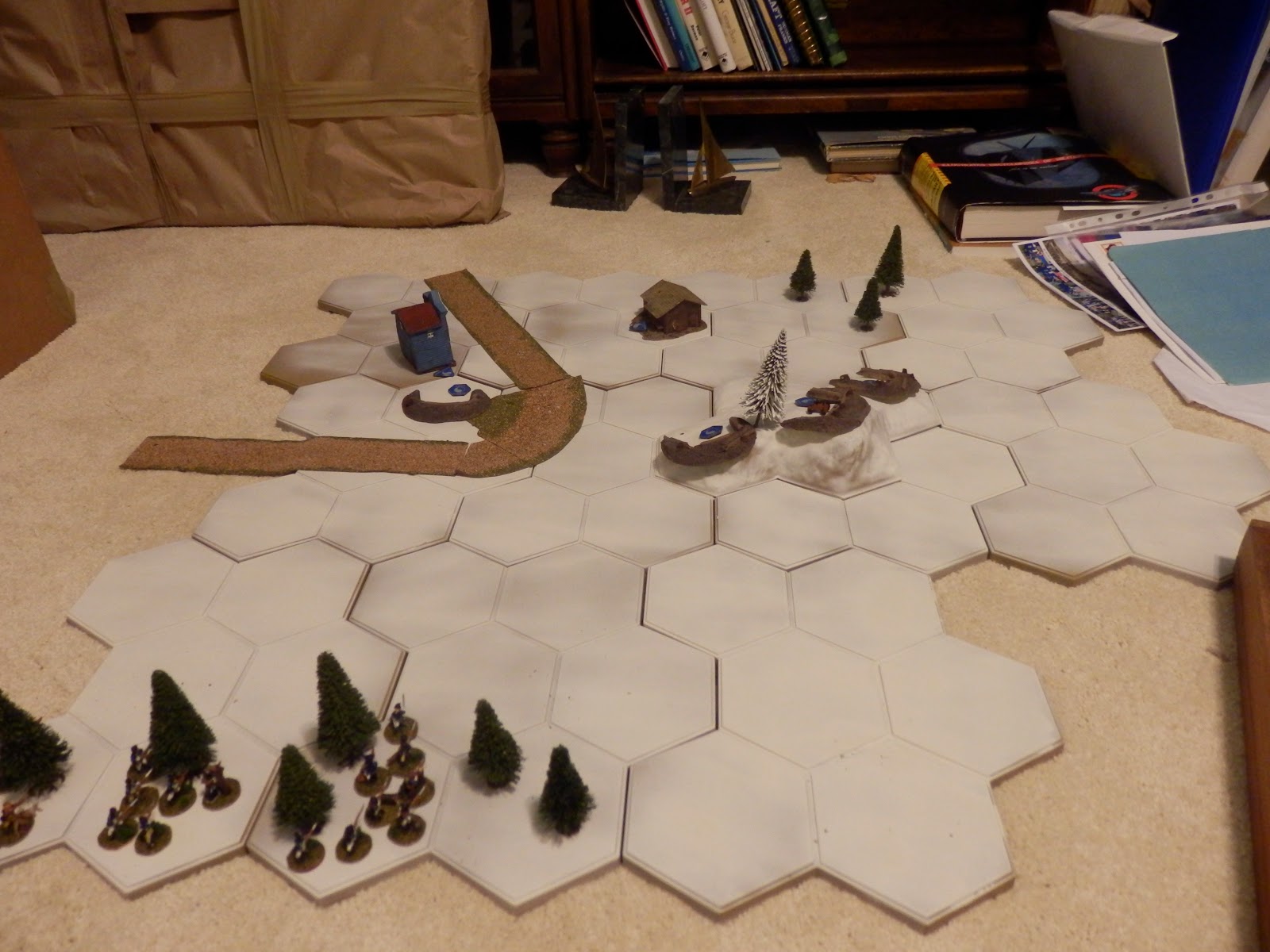 Rebels come in from the forest at bottom.  6 blinds are placed along the hill and at the edge of the village.
Visability starts at 80 yards

Capt Madison's plan is to take Sgt Turner and 14 men to attack the hill directly to disable the cannon.  Sgt Towers [ I haven't painted up Lt Fish yet] will move to the buildings and neutralize/block an enemy there. 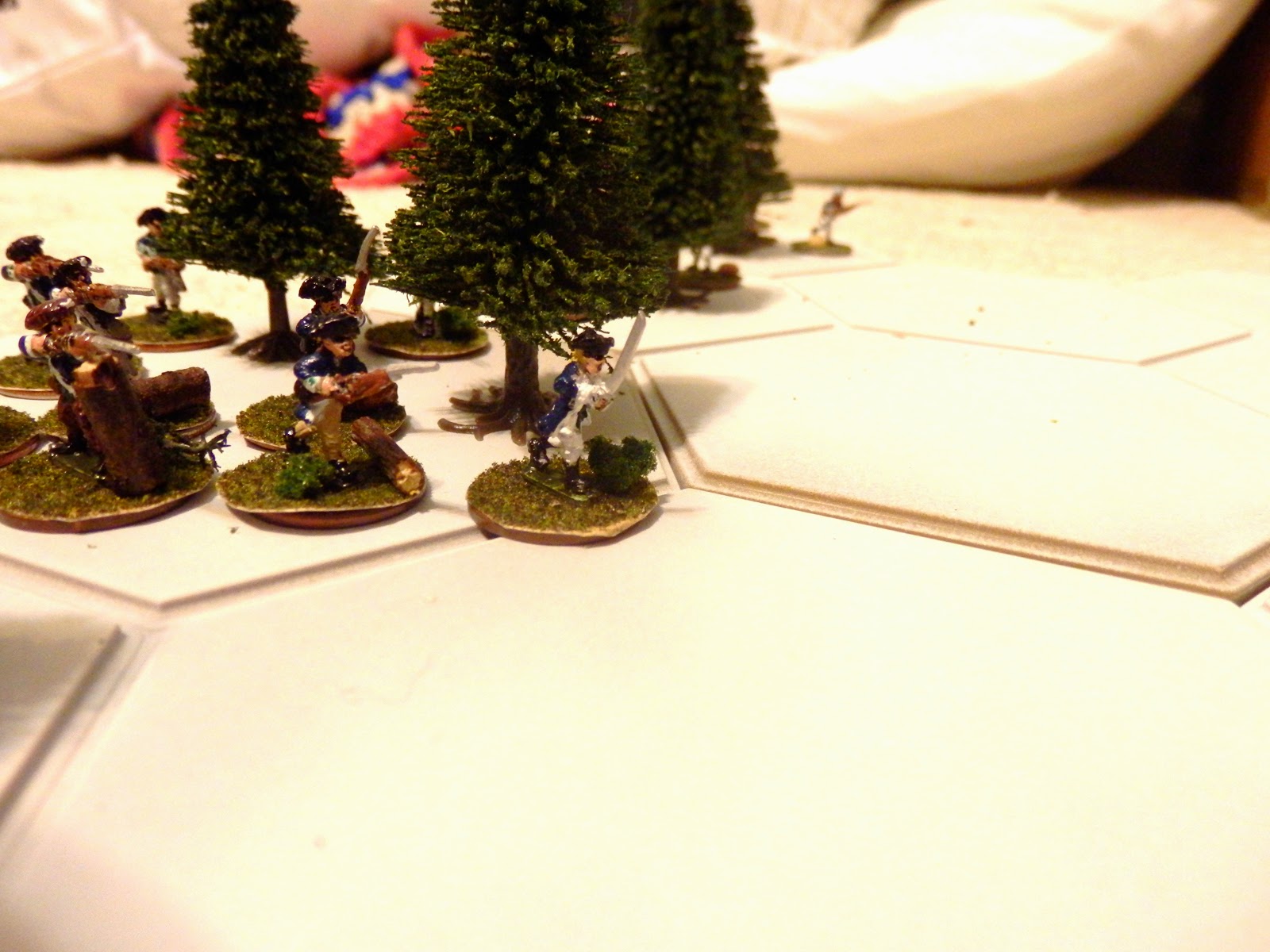 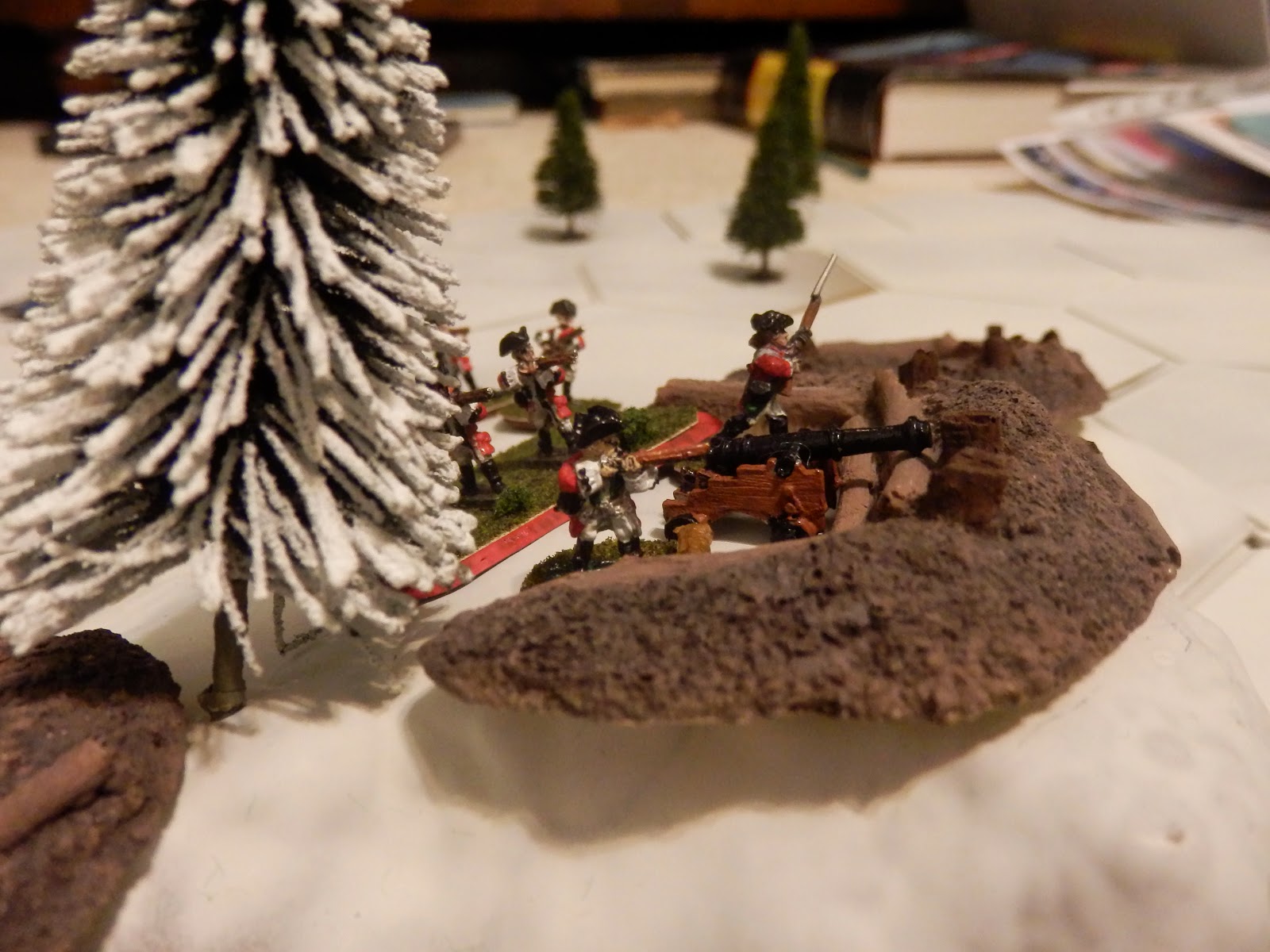 The British battery soon to be relieved for the day.

The British ended up with 13 men on the hill and a LvL 1 Sgt. The 6 men on the left side of the hill were decimated by gunfire but held their ground.  The British Sgt kept 7 men back to guard the cannon.  [ Had a leadership check and he remained in place!] 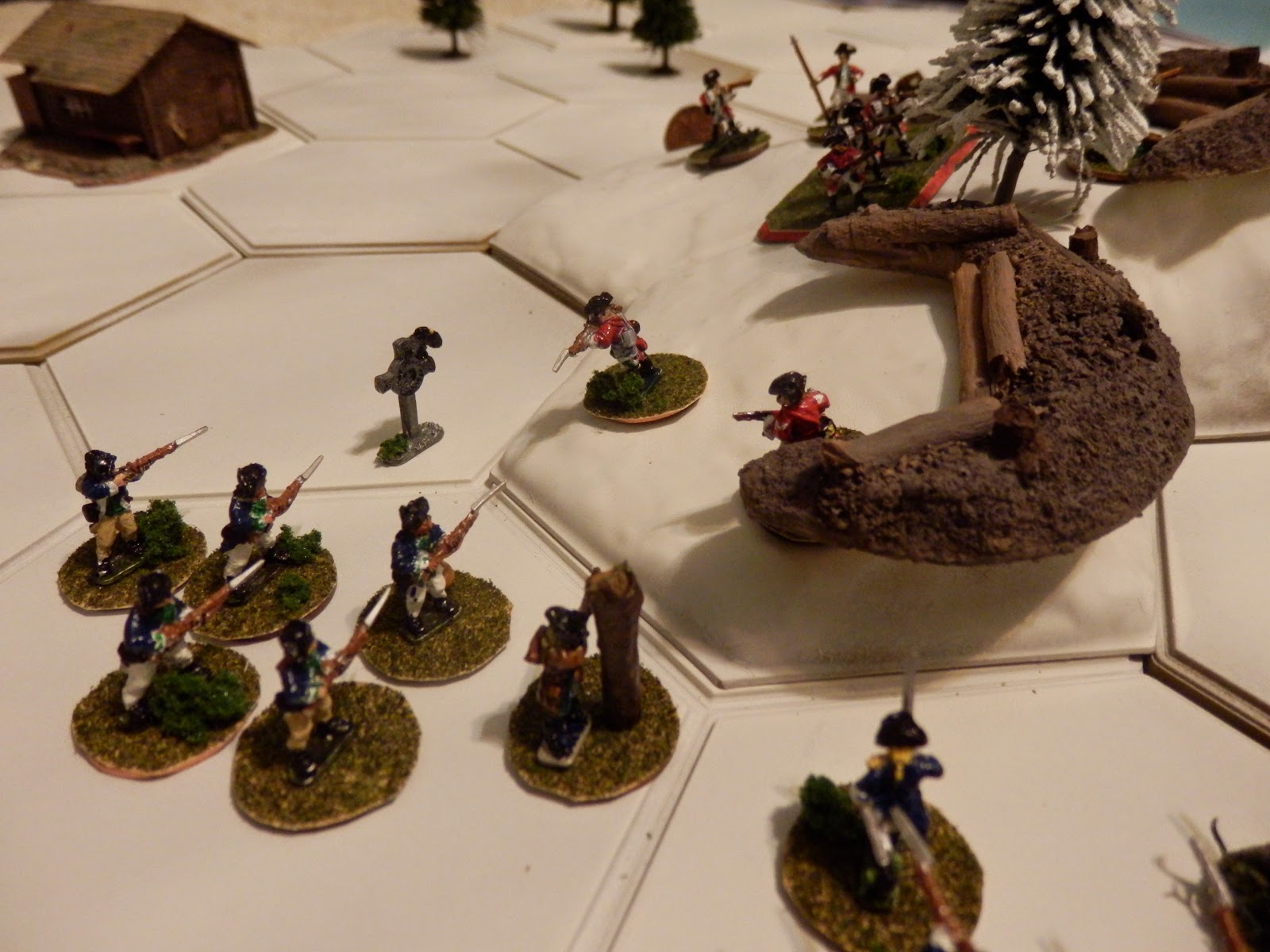 Sgt Turner charges up the hill at 2 redcoats!

Meanwhile on the left flank 2 of the three markers were dummies.  The British would not move for 3 turns and Towers beat them to the punch by entering the house. 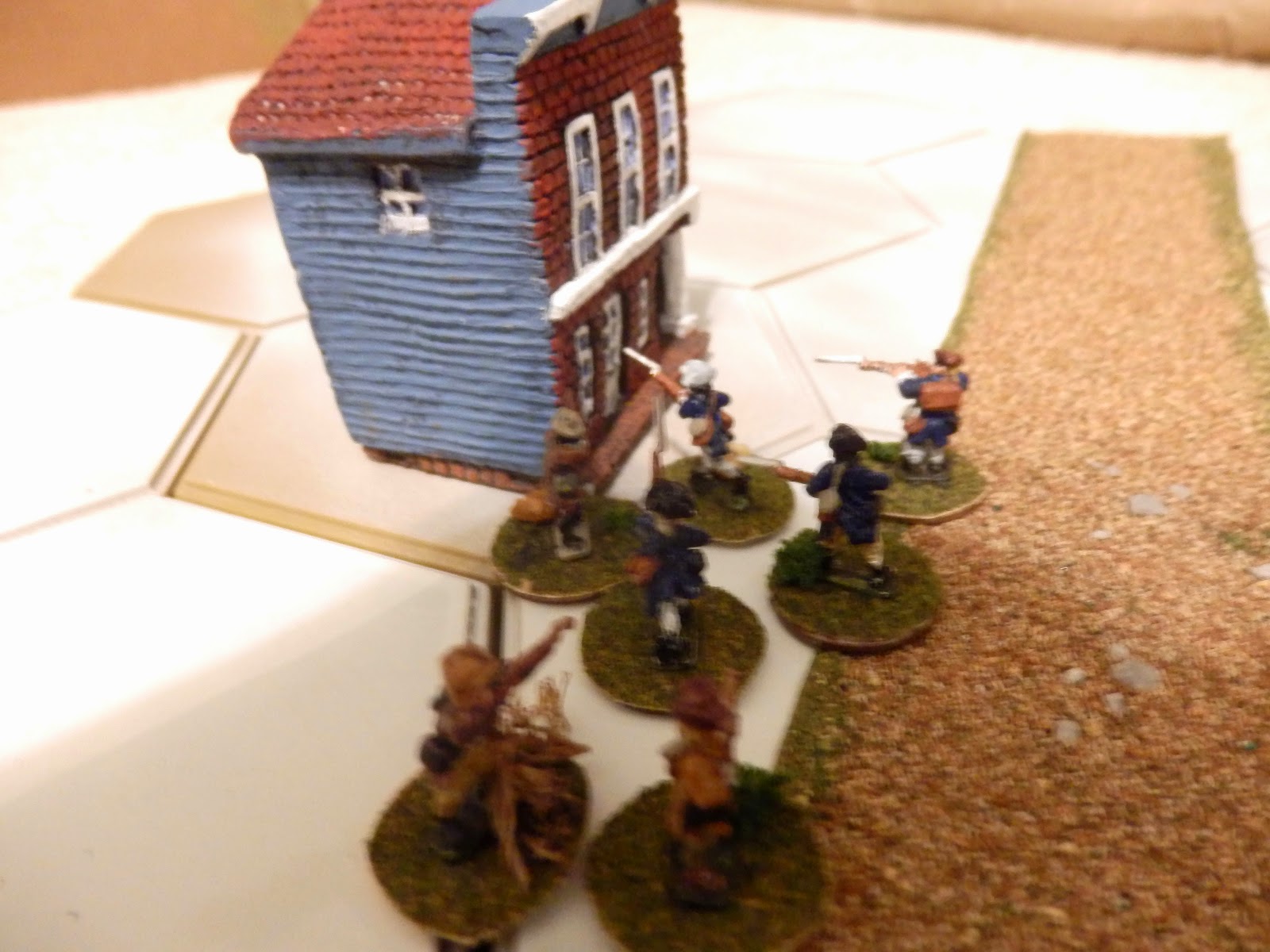 Sgt Towers had stumbled onto 6 marines that guarded the cannon during the day.  The problem here was twofold; they were elite troops and their officer had a sword.  Sgt Towers went down unconscious and 4 other rebels died at the cost of 2 marines. The two rebels left standing did not bother to save Sgt Towers during their flight from the house.  Later one would say, " Served the bastard right." 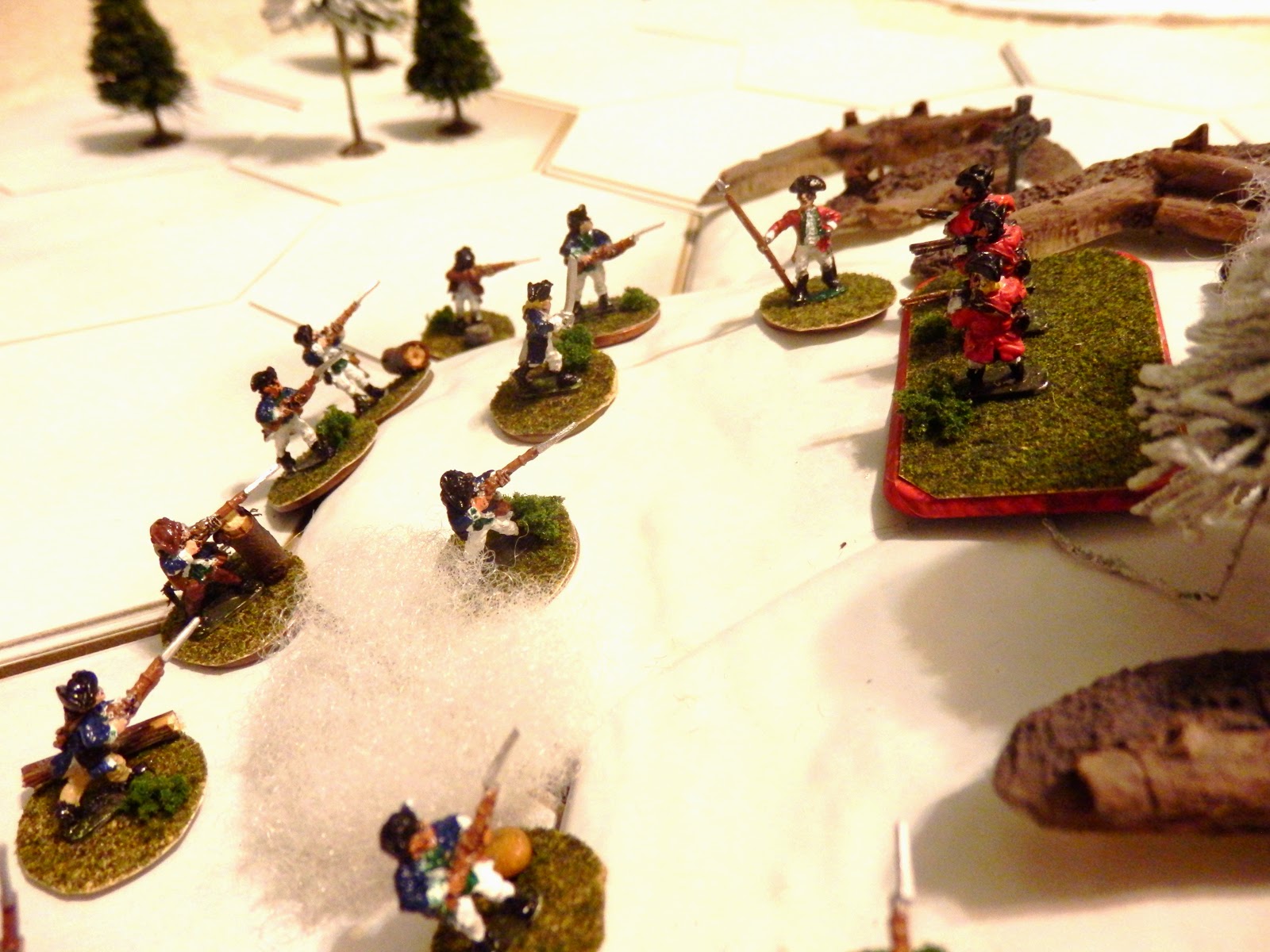 With the cannon disabled Capt Madison left back into the woods.  The marines fired parting shots.

Post game we had 3 light wounded, 3 Invalided home, 2 dead and 1 POW [ Sgt Towers]    We will get 3 replacements.   Capt Madison also met an artillery officer and despite the fact that Capt Waters is also a pharmacist, his New England ways must have rubbed the Virginian gentleman the wrong way.  Capt Madison is going to promote Sgt Clark (lvl 1) to company Sgt over Turner.  Clark was a dockworker in Baltimore before the war.

It was a blast to play and hopefully I can get it out to you guys next year!

Posted by FlightDoc at 7:32 AM