Well I spent Saturday at the Williamsburg Muster and had a very good time.   I demoed my "Release the Hounds" rules which were well received.  It is always scary putting your stuff out there but everyone seemed to enjoy them.  Best part was after about 5 turns they all knew the mechanics and I did very little except enjoy.
The show was well attended and everyone seemed to be having fun.  In addition to some enthusiastic naval player I renewed my friendship with Justin from the hanger and meet Ron from this group who was running a Chain of Command game.  (Forgot to get a picture of it as I got called to the hospital but it looked superb).  I was also introduced to modern Afghanistan through a game called Sanguin by Chris of the Phalanx Consortium.  It had some nice mechanics though it was man to man rather than fire-team.  Finally I met an English bloke who works in Williamsburg as an archeologist.  The only sad part was Carl of the hanger was not able to attend as he is in the hospital. 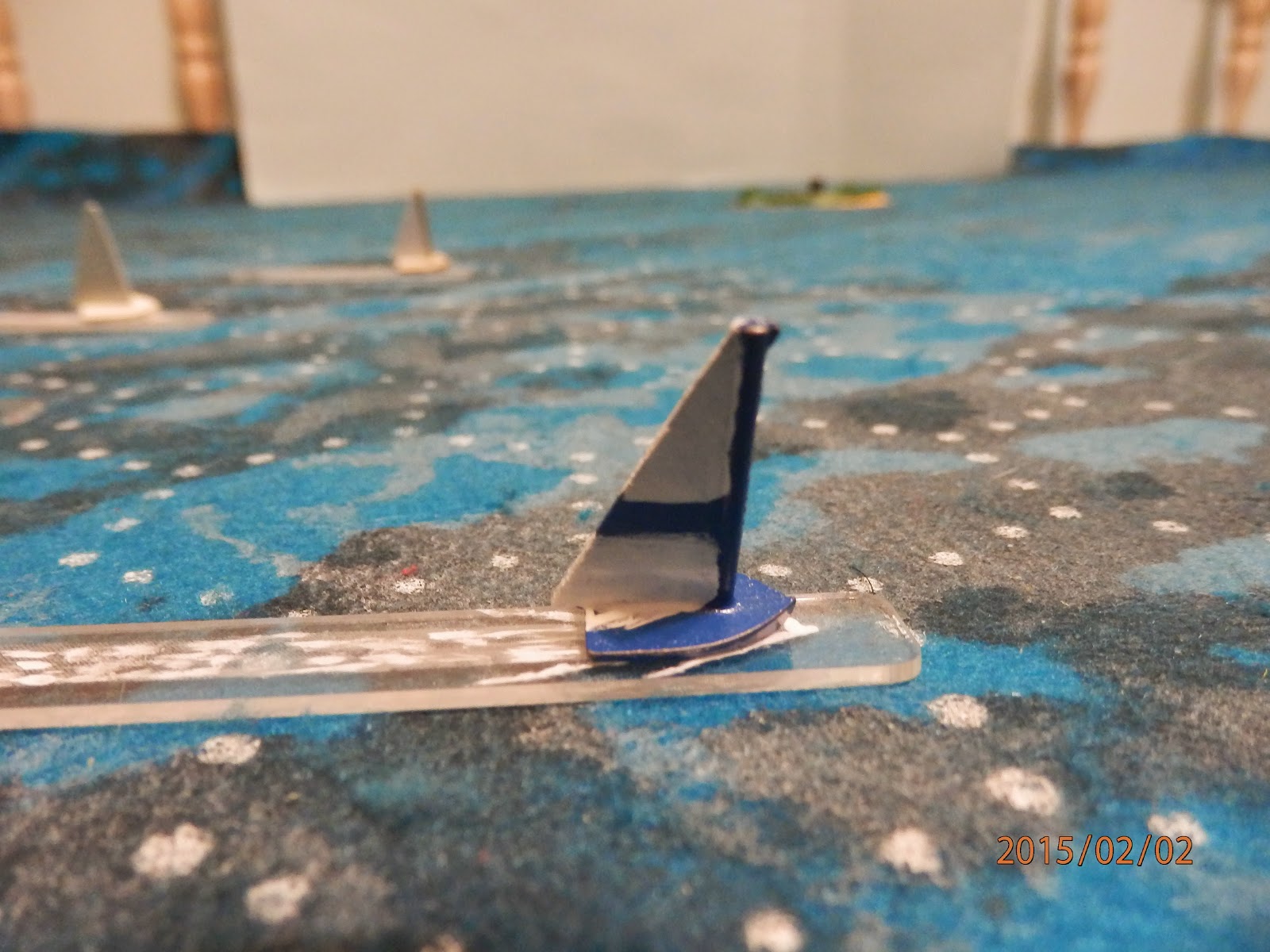 Before we start with the show I thought I would let you know that I occasionally play non war games.   Here is 3M's Regatta with some optional rules I downloaded from Boardgame geek. 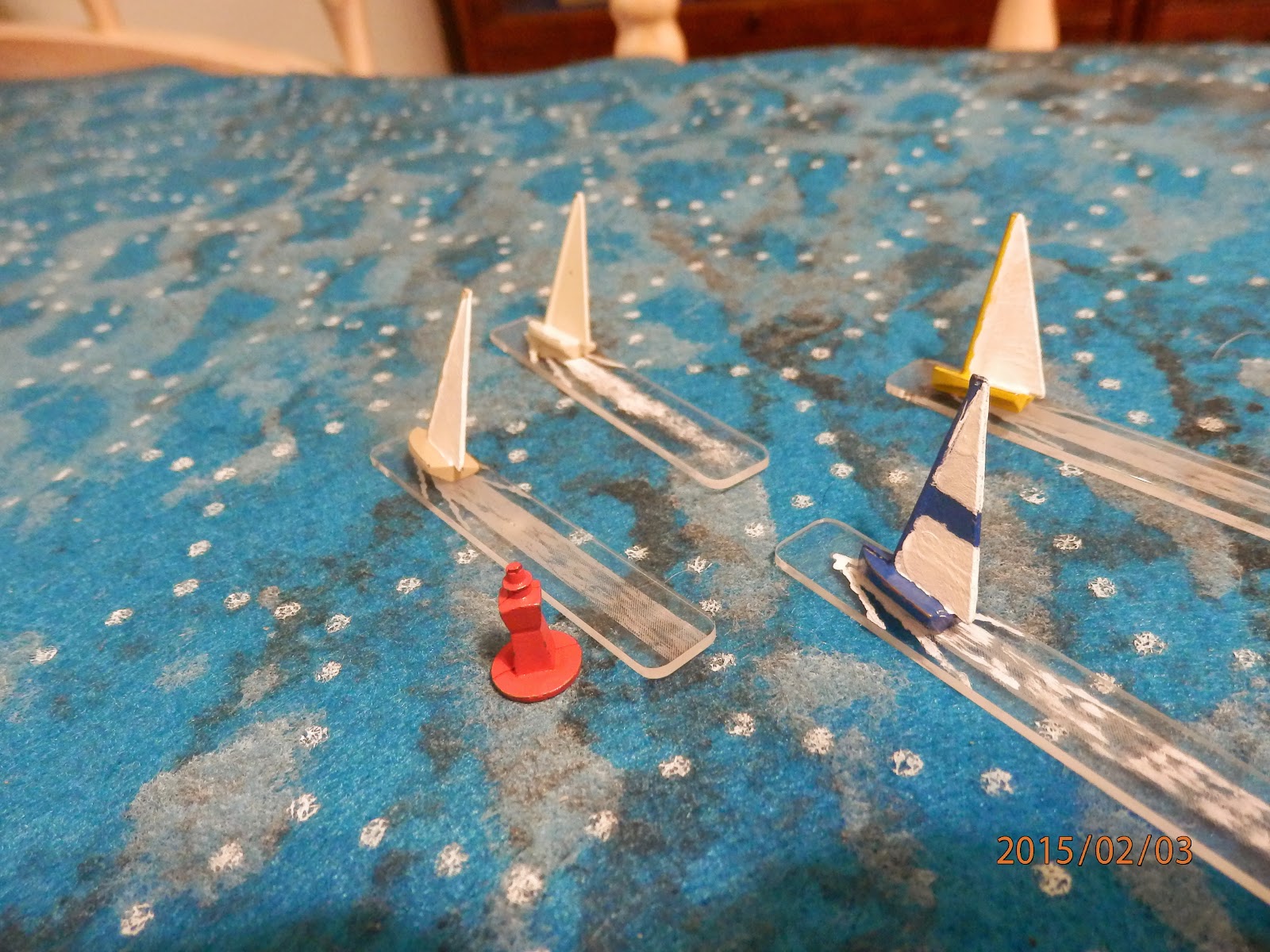 They are around the second turn.....

On with the show! 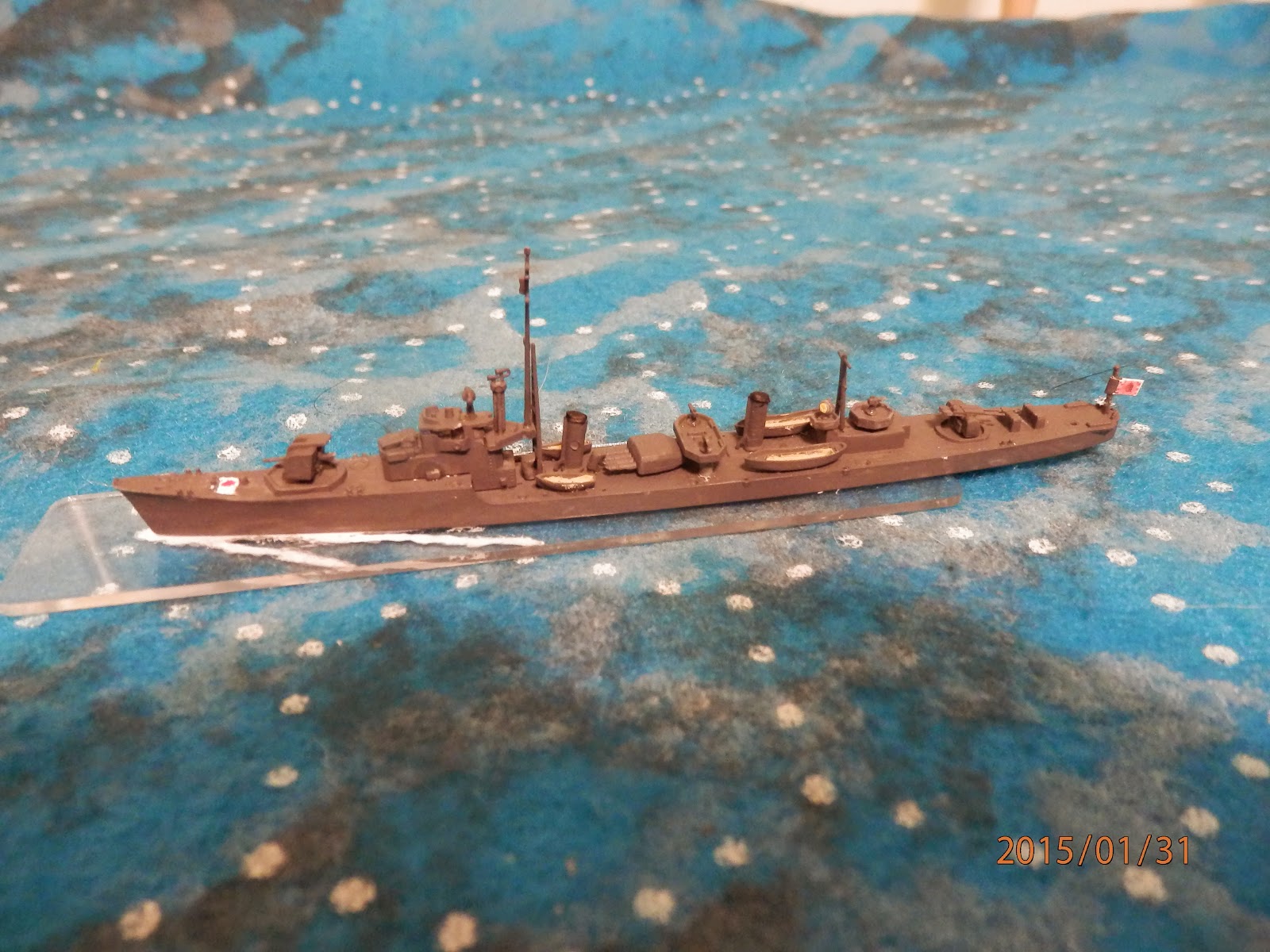 Here is a Japanese DD.  It didn't get into the game but hopefully kept the US players worried. 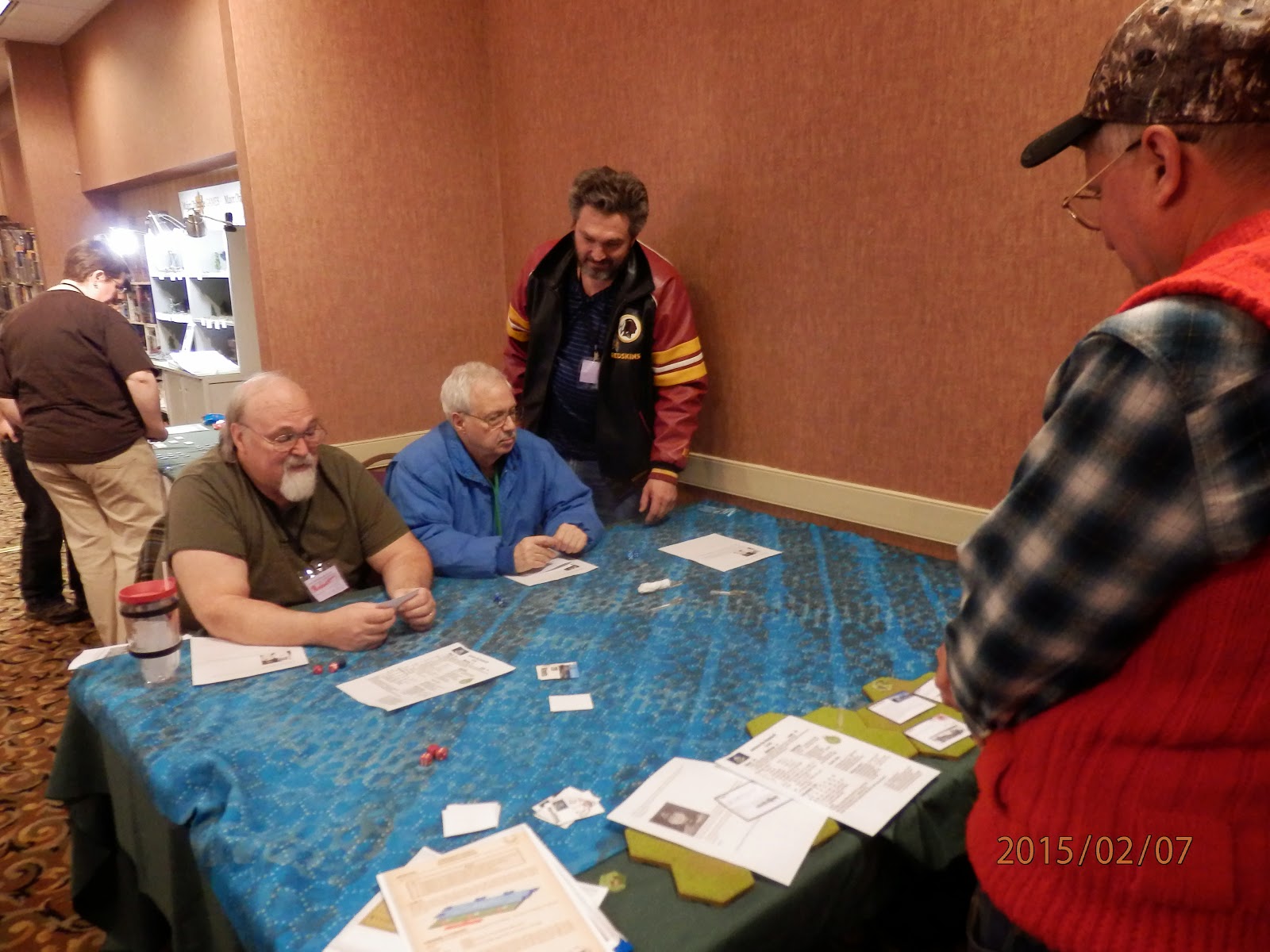 Our intrepid band of players.  Great shot of the US PT captains. 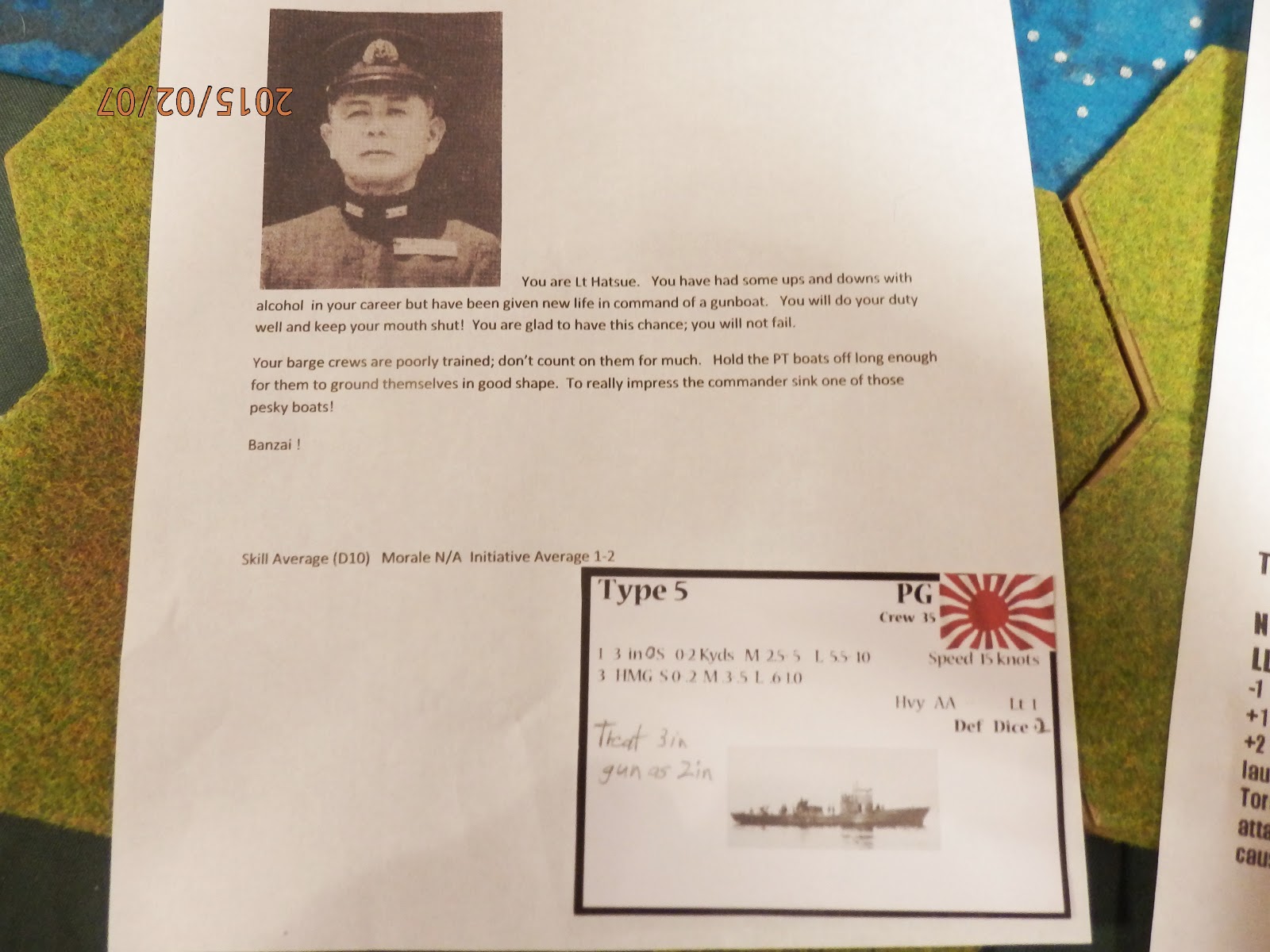 Everyone got a character card before play.   You knew I would try to add some Platoon Forward stuff somewhere! 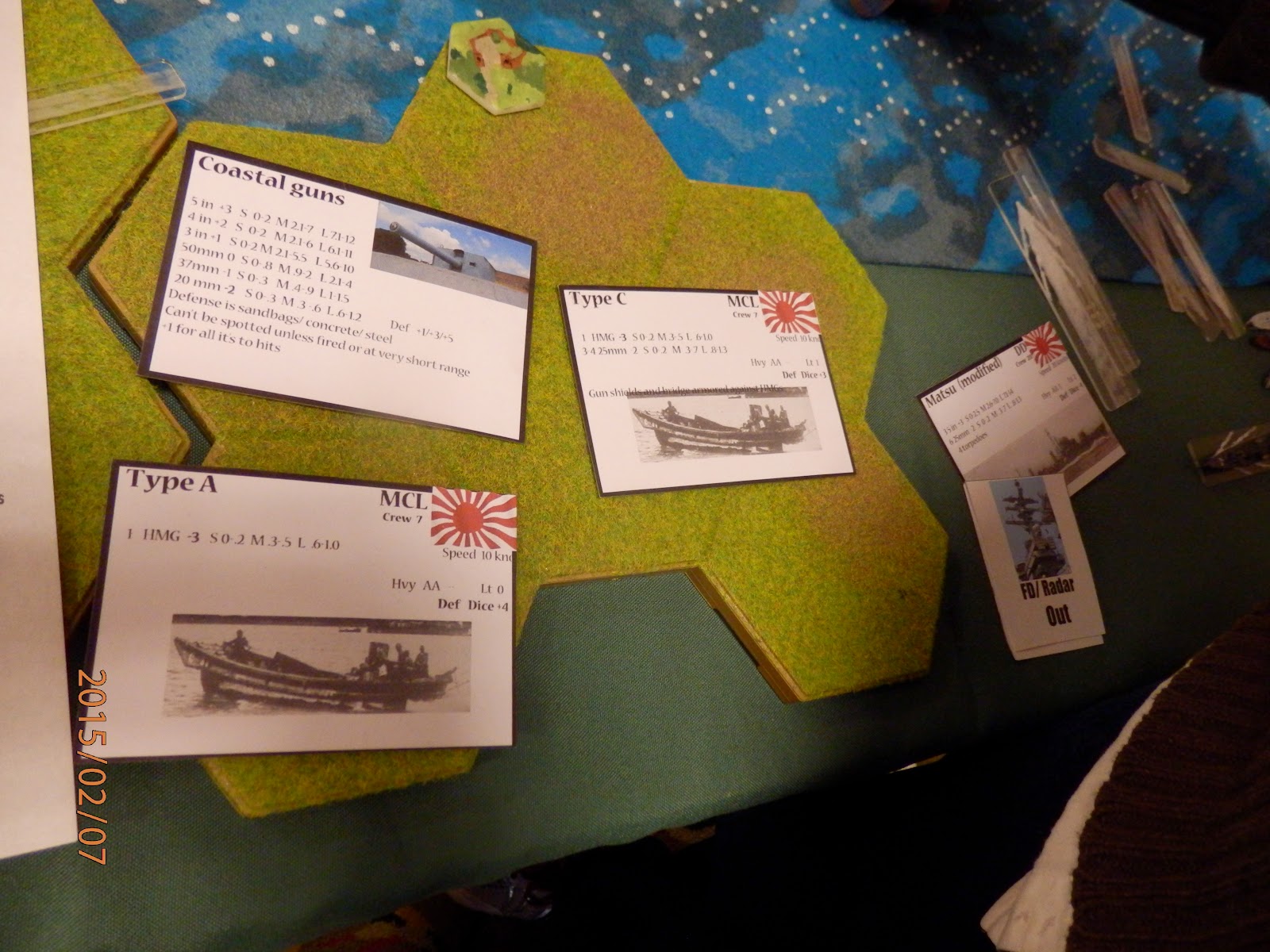 Shot of some ship cards. 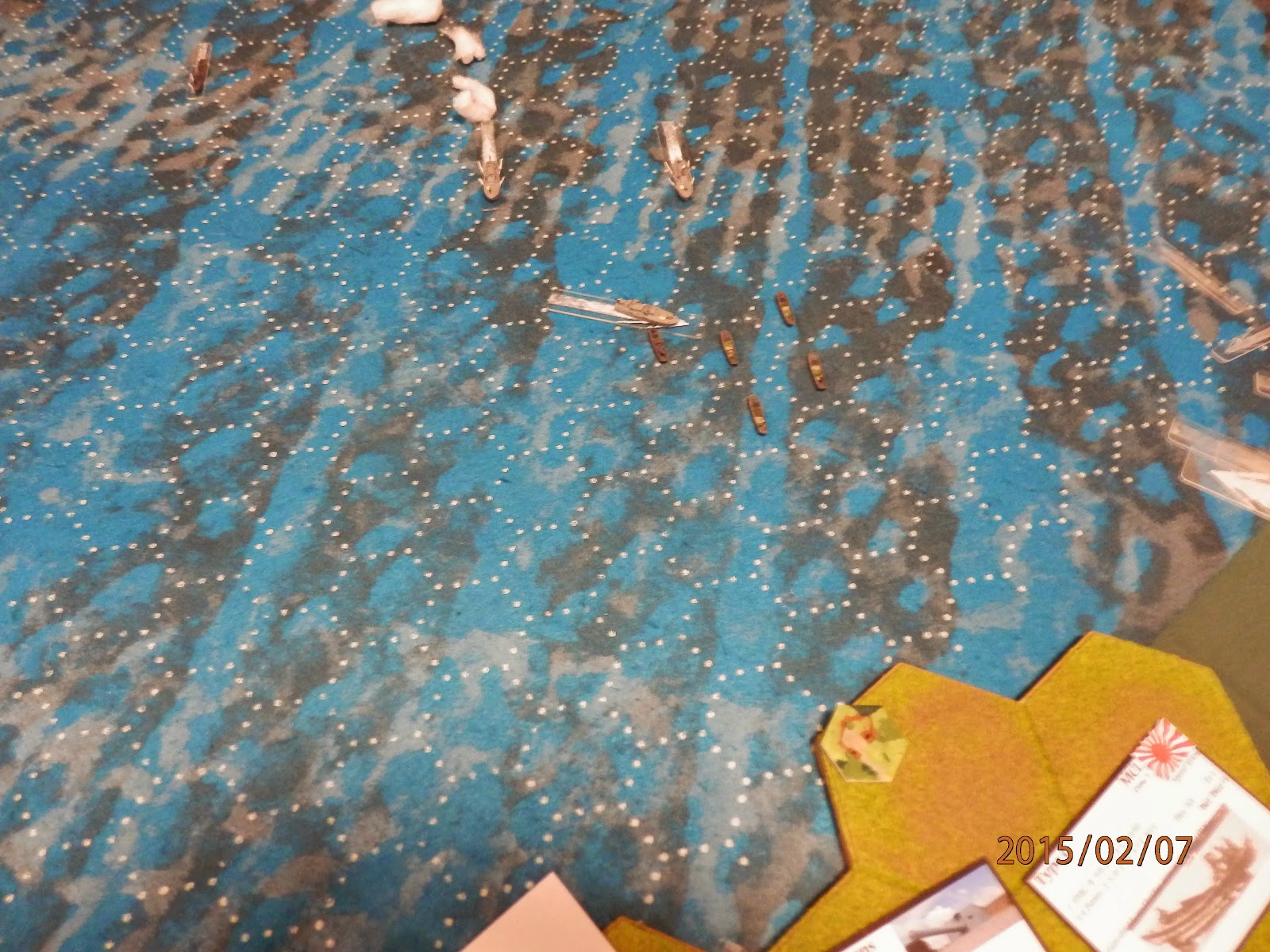 The PT boats close on the barges.    The japanese gunboat and 3 inch shore battery take their toll. 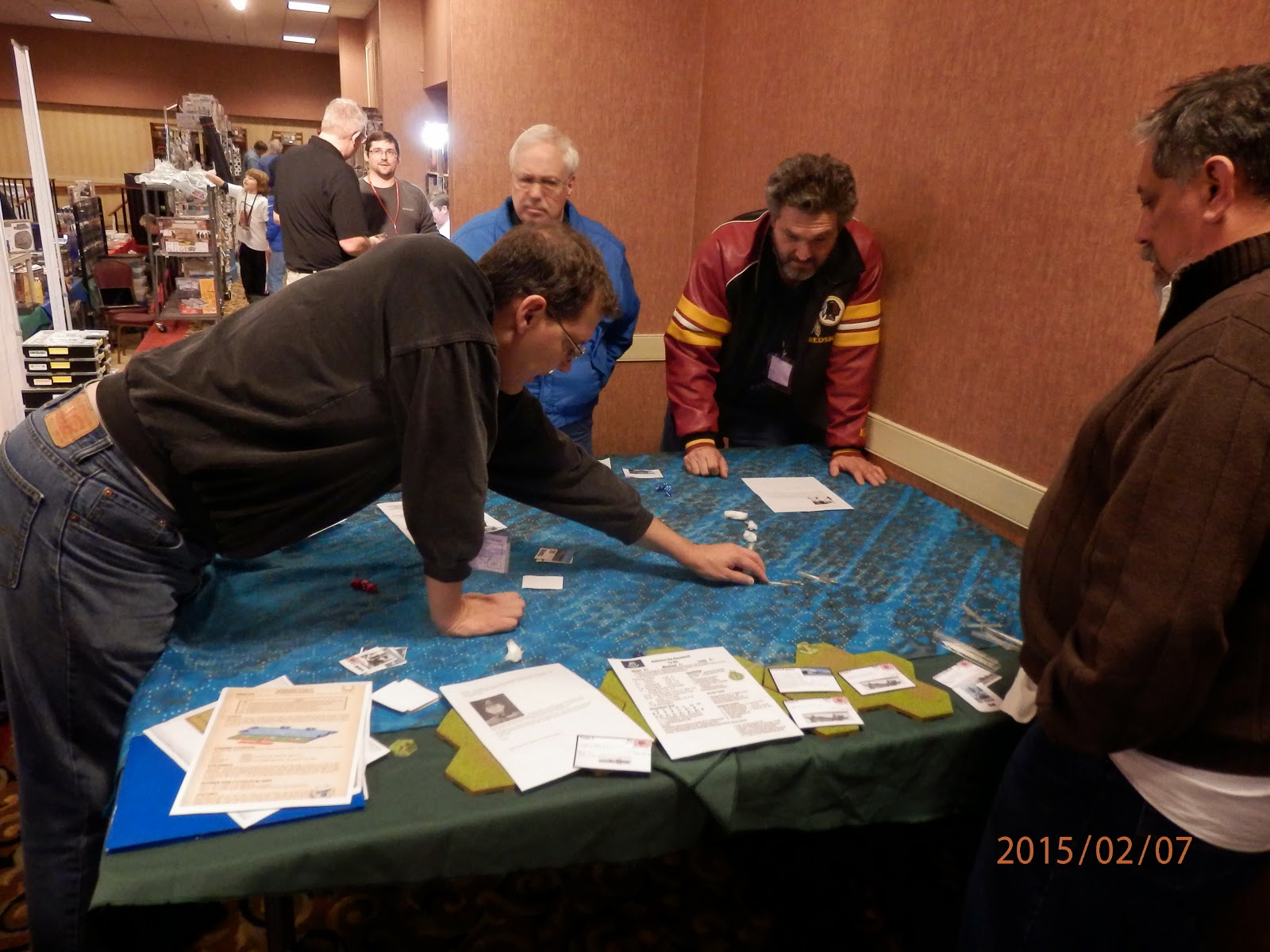 Our intrepid umpire gets involved. 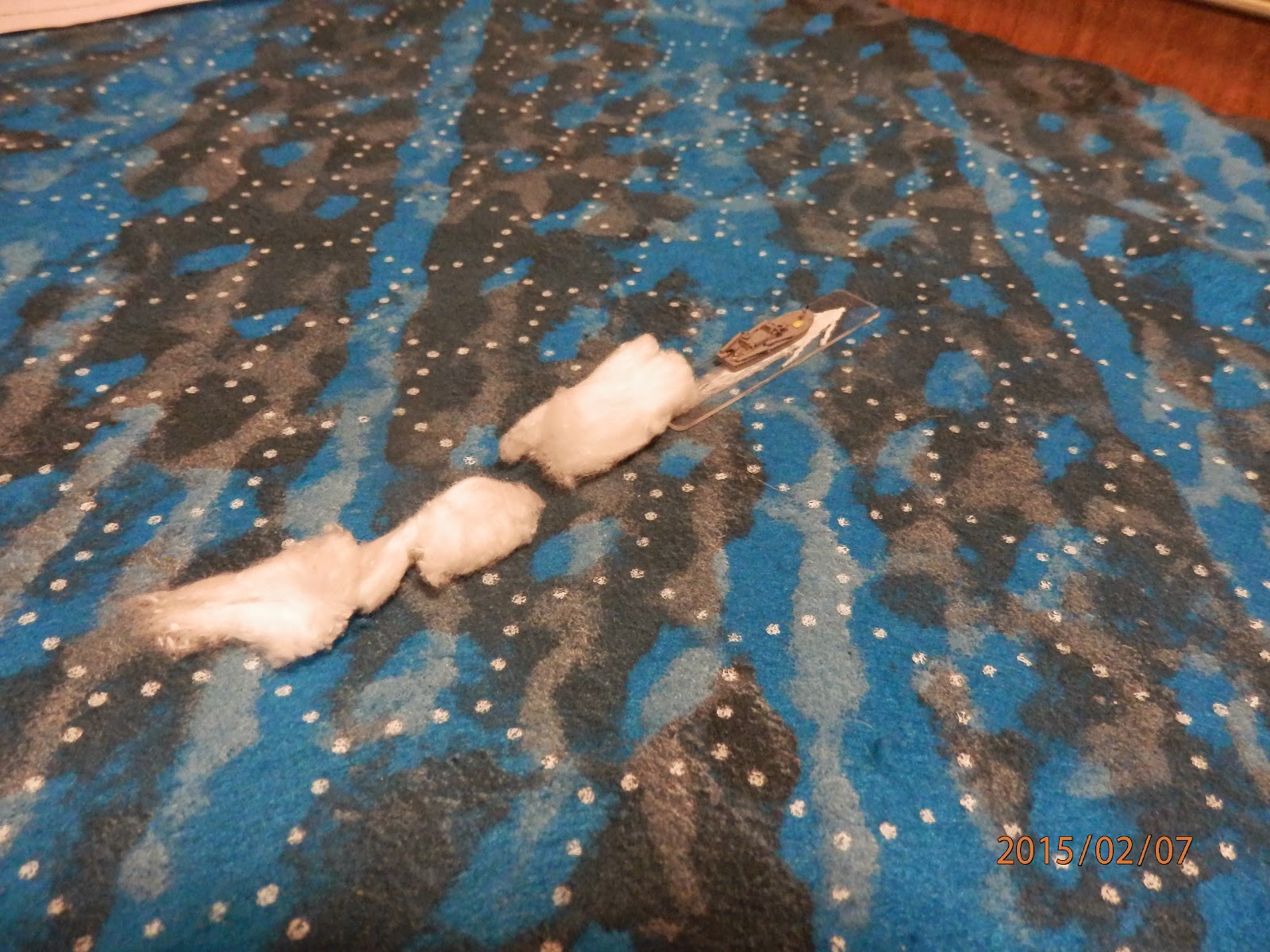 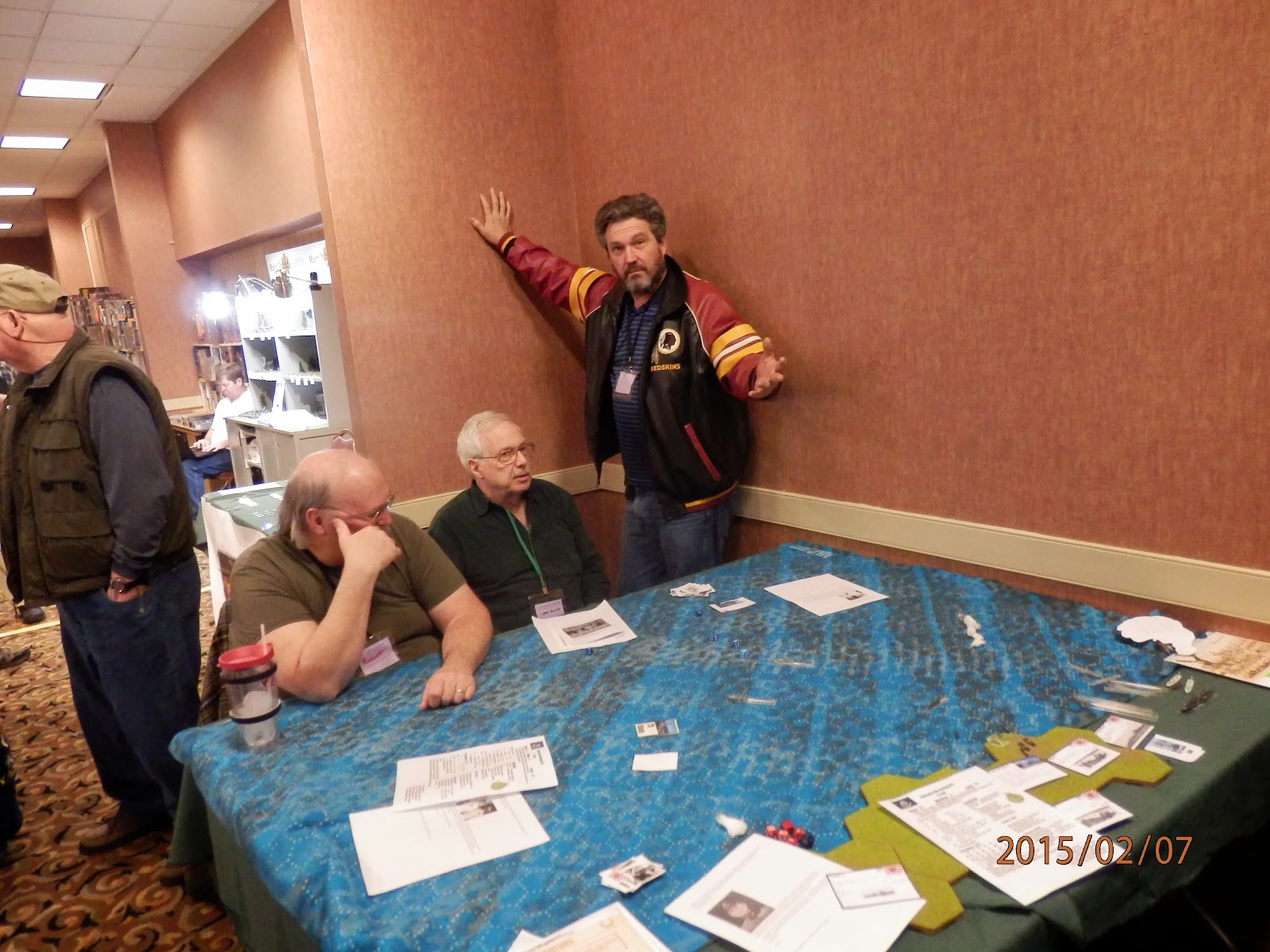 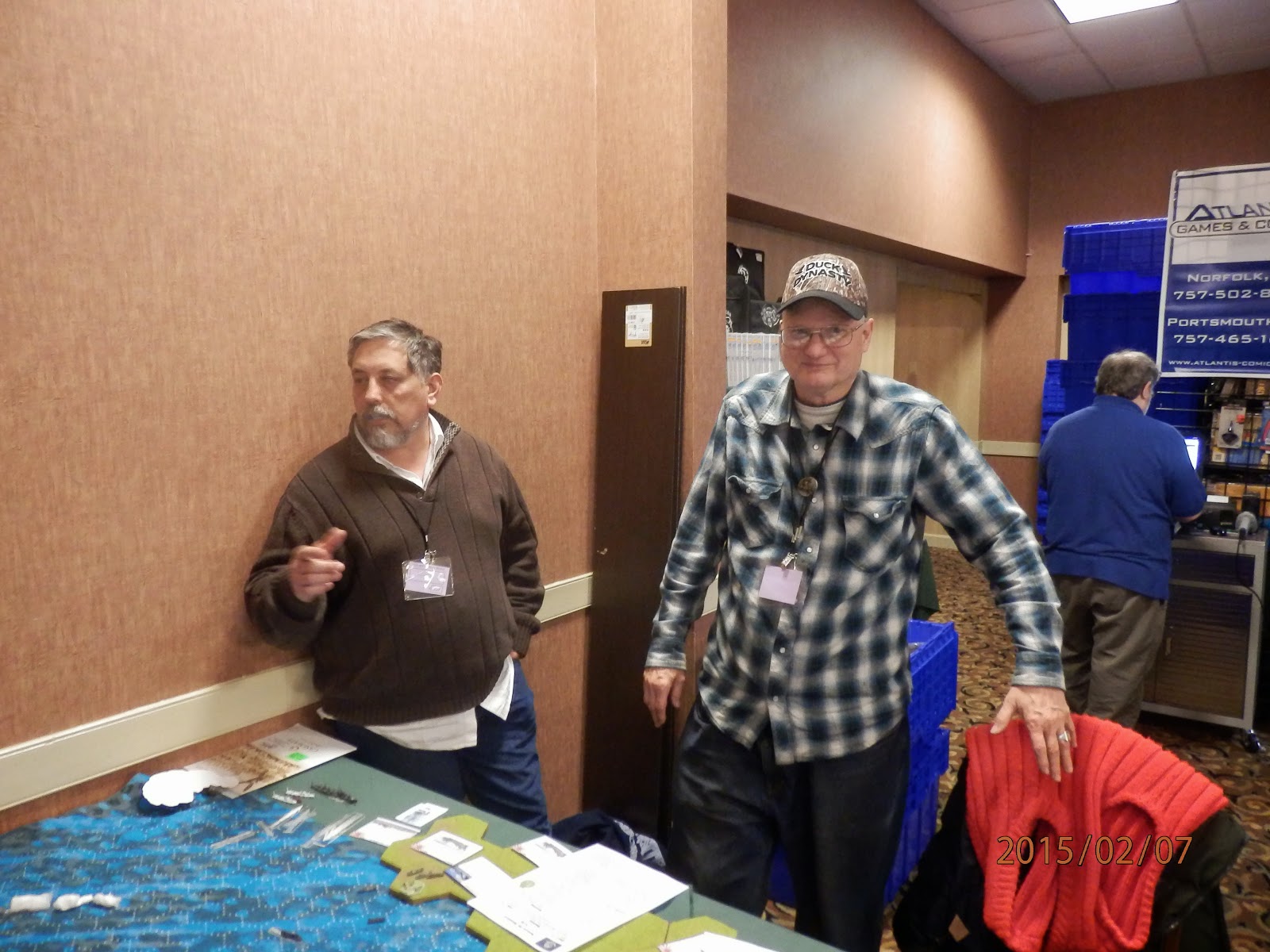 The Japanese players realize it was all skill!


I ran the PTs going after the barges again and the american's got hurt early but managed to wreck two of the barges.  Two PT boats were wrecked as well.   We called it a draw and everyone exhibited great sportsmanship and gave me valuable feedback.   Thank you all!! 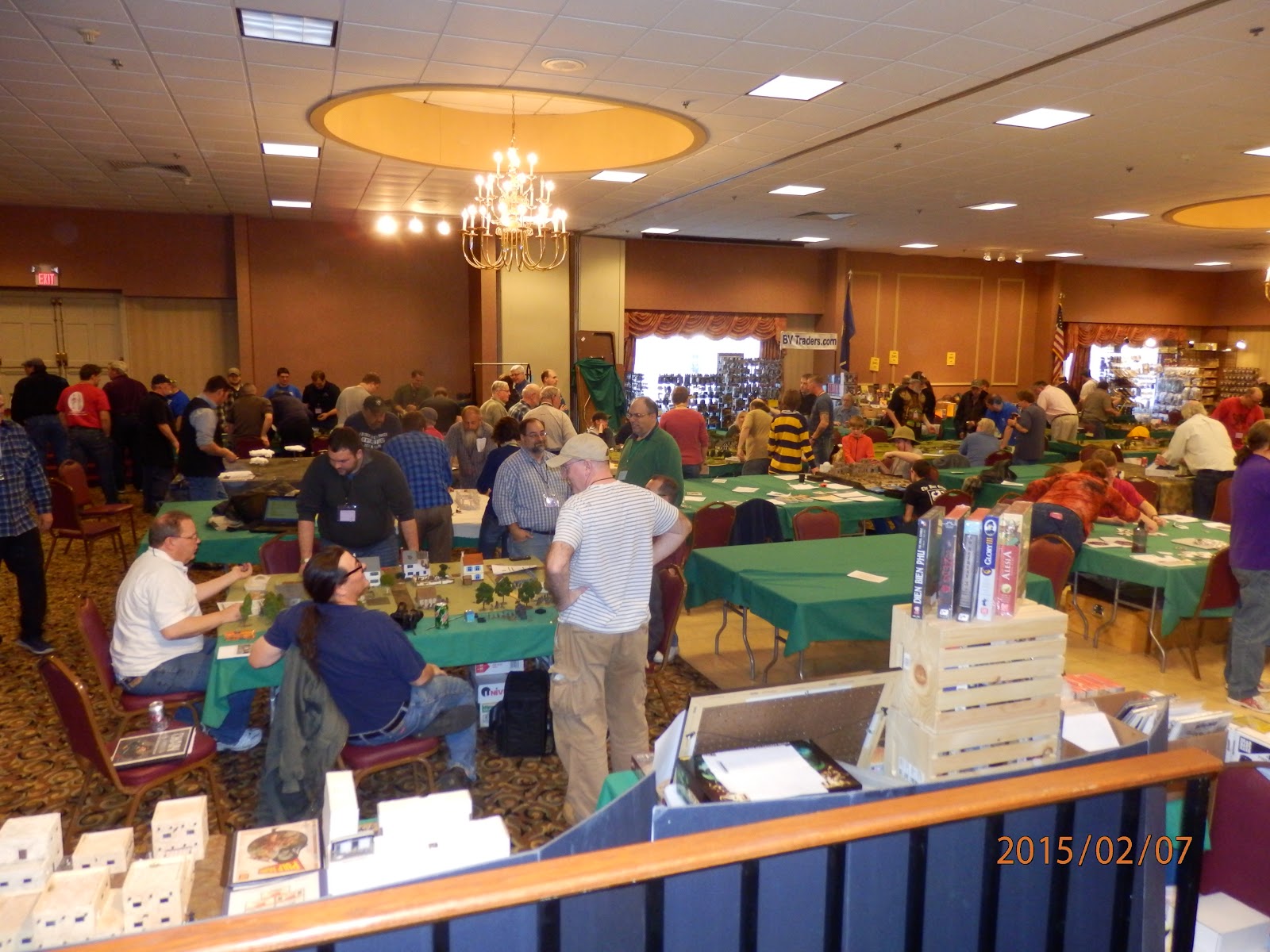 General view of the convention 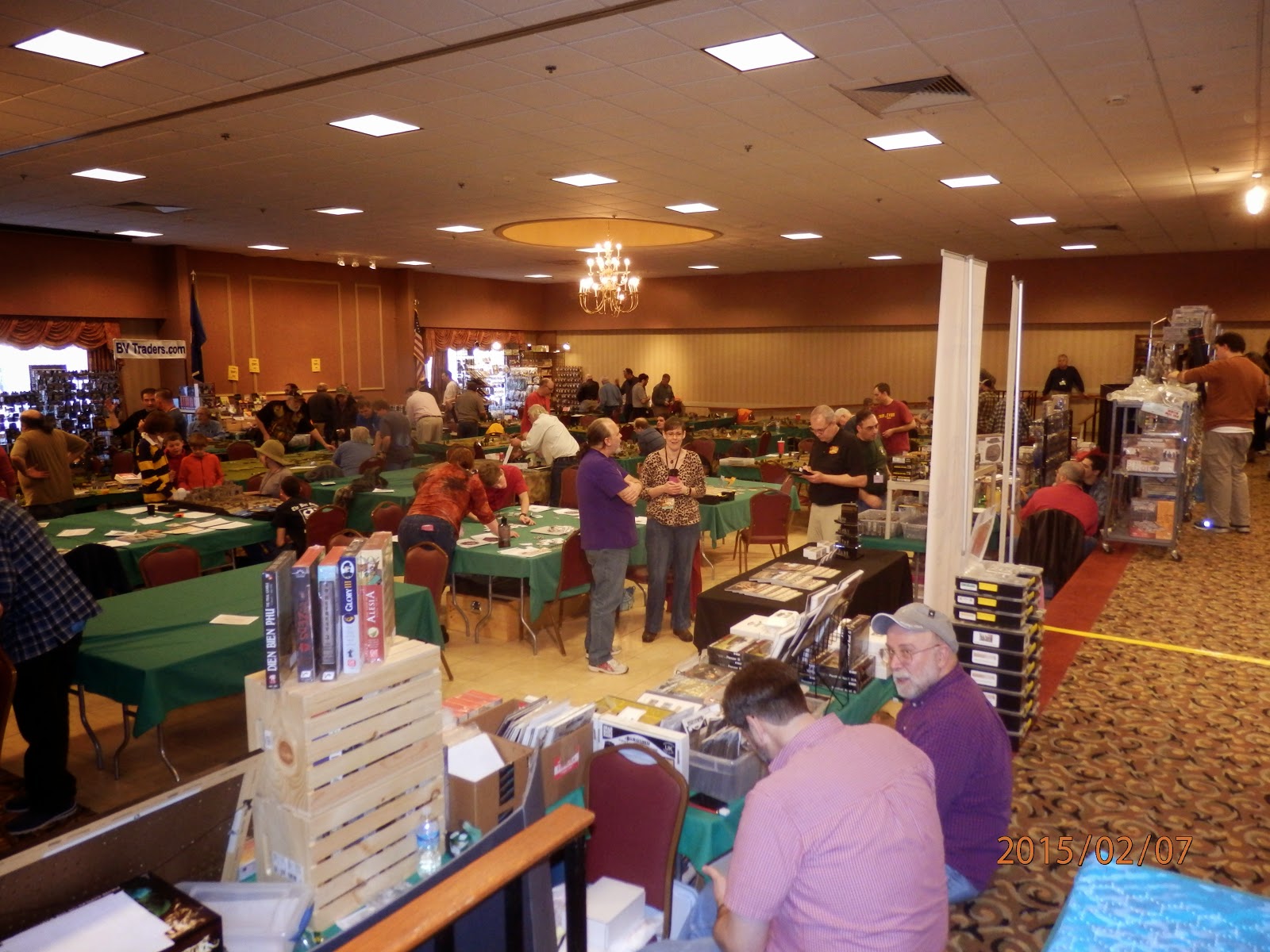 Another view.  As you can see plenty of games to play and there were two rooms set up just to play pick up games!!! 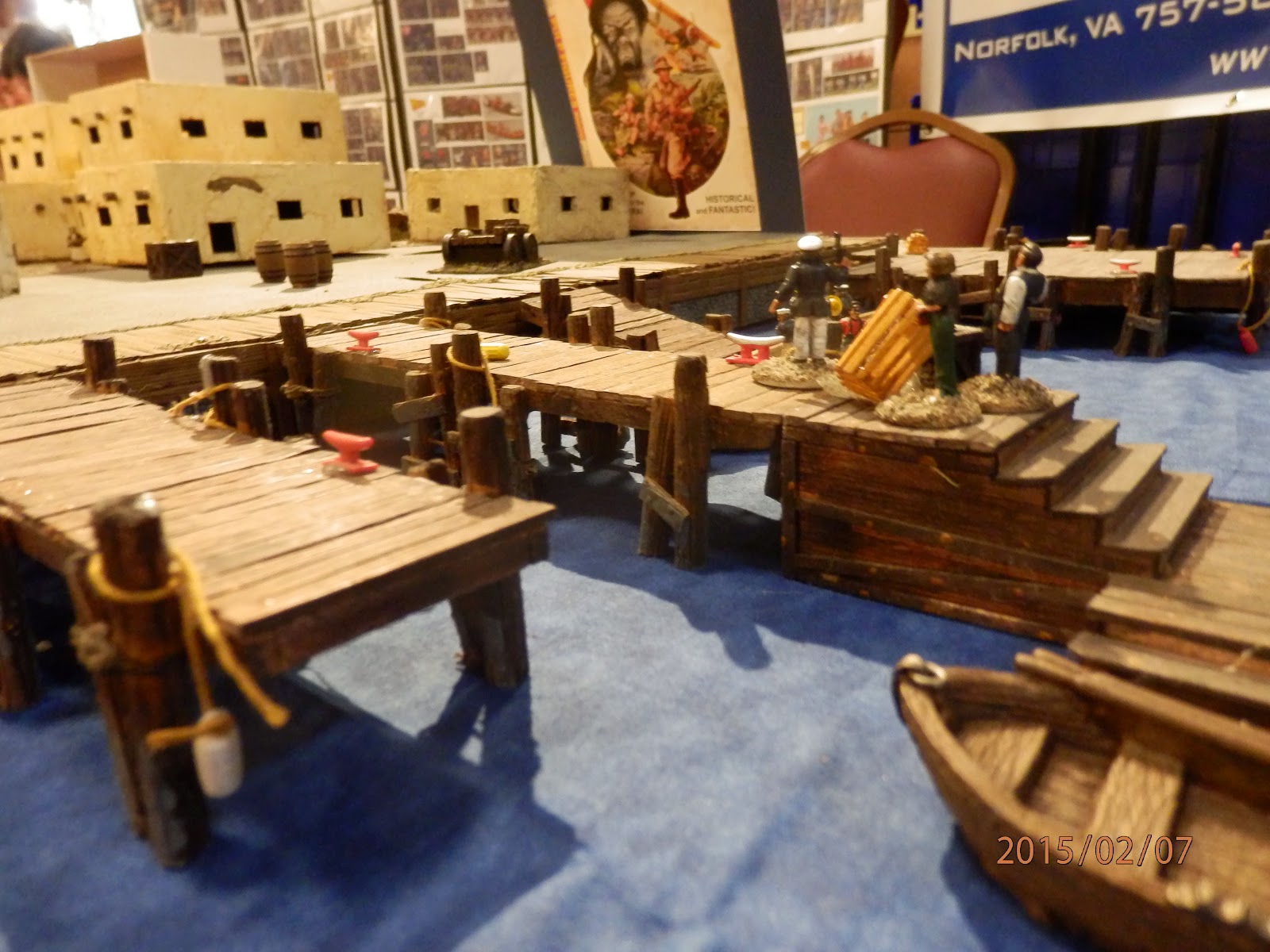 Not sure if this was a game or not as no one was by the table the whole day but I thought it looked great. 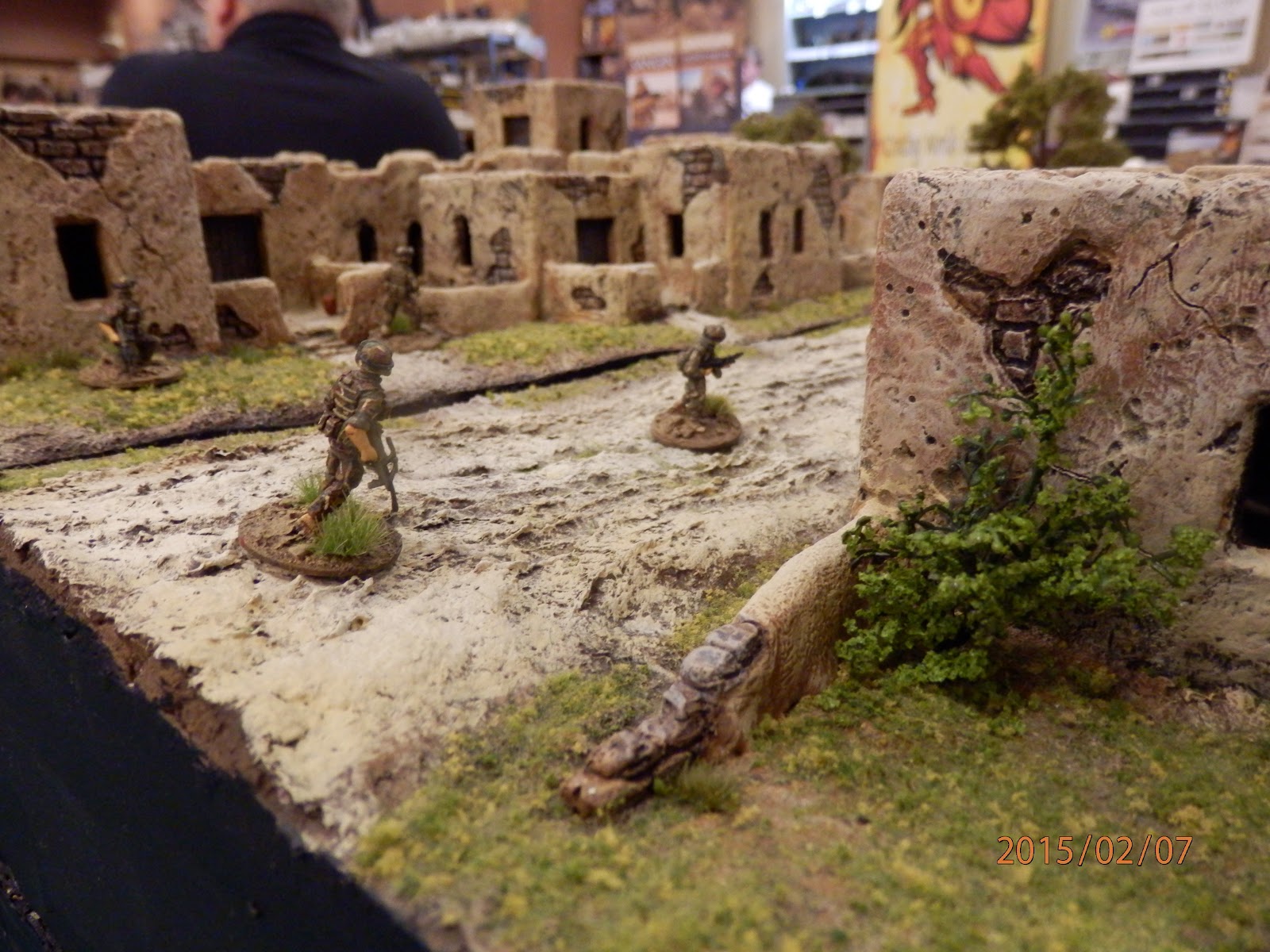 Afghanistan-- thought this board looked great and the rules interesting. 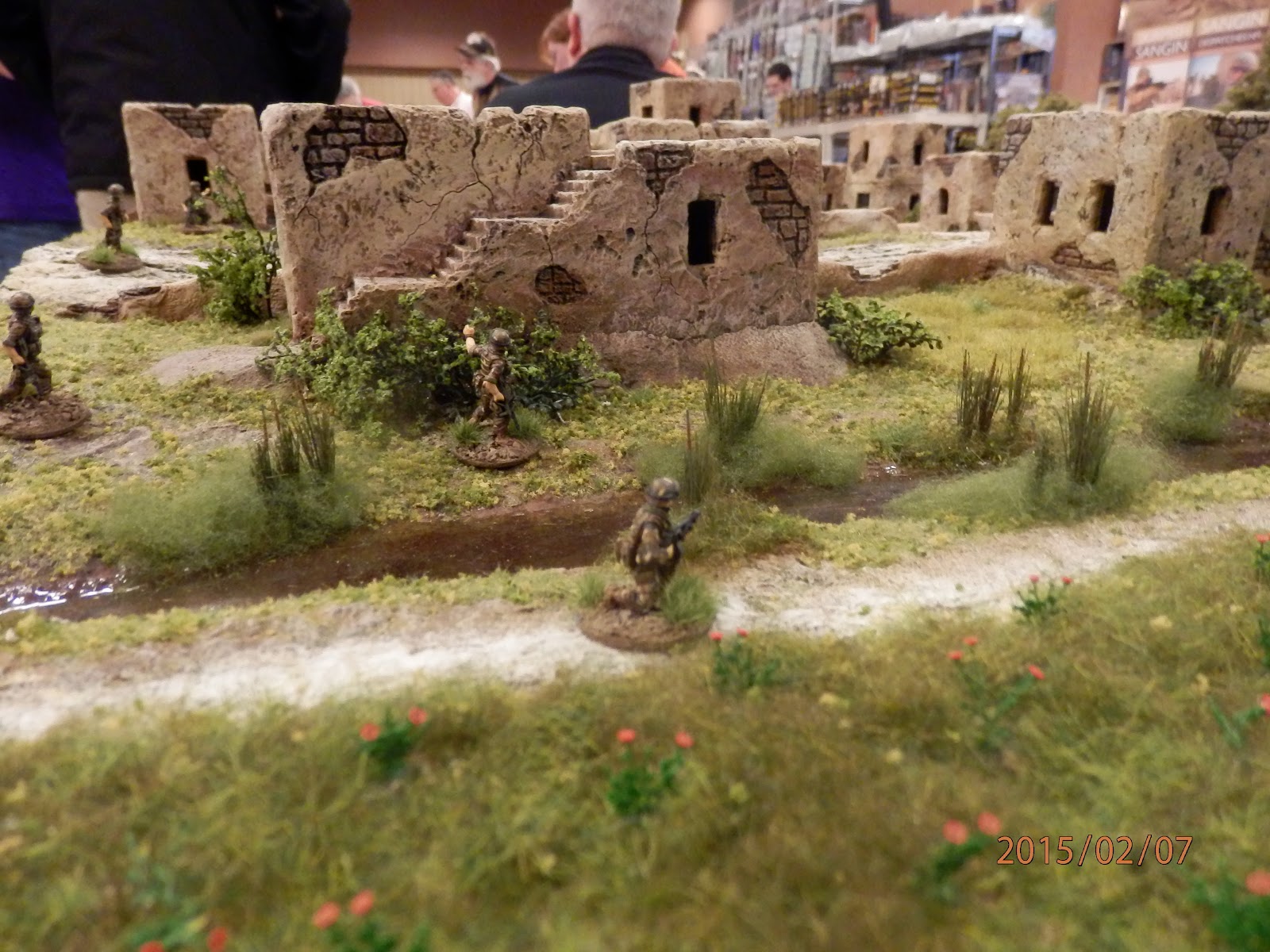 Another shot of the board.  Have to admit, am tempted to switch my Cold War Project to this as I haven't painted anything up yet.

Did make several small purchases.   Bought some French resistance fighters and two generic trucks for Grunt's Forward.  Purchase two Sampans from Flashpoint.  These will be useful not only for Vietnam but the tops come off so I can use them as canoes.  Finally after drooling over Sea Eagles 15mm boats (They are very expensive; too much for me based on how often I would use them) I bought a pack of their Barbary pirates for my Donnybrook games.

So I had a great time at the Williamsburg Muster.  Am looking forward to Guns of August where I will probably run something again.  Hope to see you there!

Posted by FlightDoc at 6:30 PM