Still painting up my French Indochina force so I thought I would take my ARVN force out for their second game.  If you will recall Sgt Dang Tong leads first squad and has a very weak LT.  Tong is evil and has gotten into an argument with the squad leader of 2nd squad as to how to teach the men discipline.  Needless to say Tong is not fond of Sgt Trang Chu of second squad.

Orders came to Lt Pham Chu ( no relation to the 2nd squad leader.  In Vietnamese last name is first.) That intel felt there was significant VC presence and arms in teh small village of Dong Ha. The plan was to be dropped off by the Navy 1 klick  out and advance to the village surprising the VC.  They would also have a gunboat for support.
Lt Pham Chu  Inept/Religion   father is govt official                 Gr I   and hesitant
Sgt Dang Tong  1st squad     Evil/ Pleasure    orphaned and raised by Uncle     Gr I
Sgt Trang Chu   2nd squad   Gambler/wealth                Gr II
Each squad with 8/8   6 rifles + 1 BAR plus SL with SMG
1 LMG and Pham Chu has on call 81 mm Mtr
1 PBR  with twin HMG forward and single MMG aft. 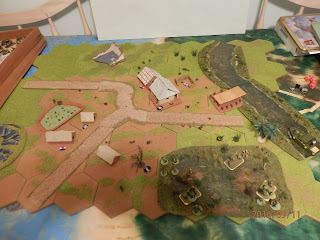 ARVN entering from bottom through swamp.  French markers are the 4 sites than have to be searched.  Black markers are enemy blinds. 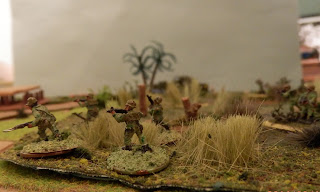 1st squad moves towards the village. 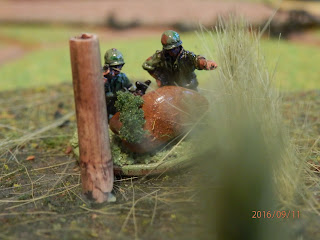 The LT trying to run the show

1st squad was greeted by sniper fire.  They moved slow enough the sniper was able to retreat to two building near the rice paddy.
2nd squad made a dash for the main buildings.  "There goes Chu kissing butt again" thought Tong.  After 2nd squad was in place a fire fight erupted from the far side of the village.   Sgt Tong Dang kept his squad advancing towards the building on the left; this was afterall the originial plan. 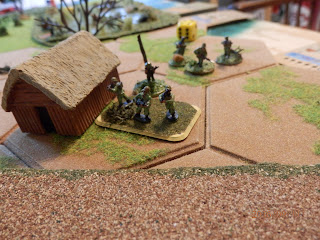 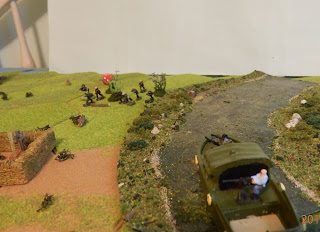 The PRB attacks VC in the brush.  Unfortunately an RPG forced it back.  D8/D10. 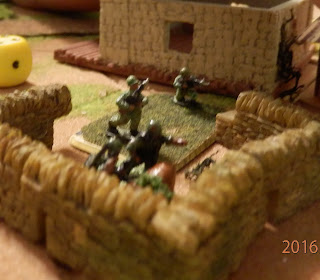 The Lt trying to call in artillery.  It never came.

A sharp firefight developed between second squad and the VC.  After several minutes the guerrillas melted away leaving 2 ARVN soldiers down.
Meanwhile...
1st squad finally reaches the houses on the right 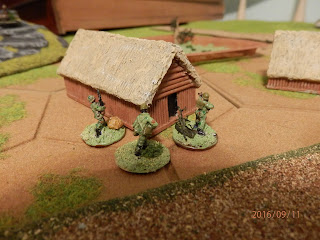 by the time they got their any supplies had been quickly moved away.

The platoon found a small amount of ammunition in the family plot by 2nd squad but clearly they had missed their chance.  1st squad had 1 serious wound that manages to return to the next fight.  Surprisingly, the squad has rallied to Sgt Dang Tong.  Perhaps they feel he is a better alternative to the LT!  Sgt DT is now looking for a chance to sink/embarrass or even kill Sgt Trang Chu.  He thinks the LT might be able to help.  Sgt DT also meets a minor government official and promises him protection for whatever he needs.  He muses the official might also come in handy.
For those of you that want to try this the VC were 6/8 and started with 1 sniper plus 1 SL Gr II + 6 rifles.  I then generated an additional squad 1 SL Gr II + 5 rifles + 1 SMG + 1 RPG.  The VC don't have to take anything.  They just have to prevent the ARVN from advancing to the markers for 8 turns.

Posted by FlightDoc at 7:17 PM