I told you I am reading a great book from teh Time Life series called Passing the Torch.  It is primarily about the French experience in Vietnam.  In addition I picked up an Osprey book cheap on the French Foreign Legion since 1945.  Beginning to see a thread here?  I decided I wanted to try the French Indochina war.  Both sides were better balanced and you get to use cool WW II vehicles.  That said, did not want to stop my ARVN platoon with evil Tong.  What to do?  Fortunately the french tried their own "Vietnamization" but went about it differently.  They had normall french organizations that were partially made up of ARVN units.  At the company level there could be 2 platoons of french infantry ( FFL) and 1 Vietnamese. Now granted the Vietnamese units were commanded by french officers but I can fudge that part a bit.
I downloaded FNG Operations years ago and for some reason pulled it out last week.  It fit perfectly with my story.  I would have a French FFL company with 2 platoons of FFL and 1 ARVN.  I streamlined it of course, changed the air rules around and meshed it with Platoon Forward/Grunt's Forward.  I have only done 2 full days of operations but we have "won over" the people slightly.  What follows is a mission my ARVN folks were sent on the first day.
Tong was glad to be on a mission.  He liked the opportunity to kill people.  They moved a click down the road from their base at Vieh Yen ( look it up) in the Red River delta to the village of Dong Hoa.  ( Don't look that one up!) It was suppose to be a base for local VM and contained a canning factory.
(I rolled up a Platoon attack.  I normally use only two squads as FOF/CP bogs down with more forces than that if I play solitaire.) 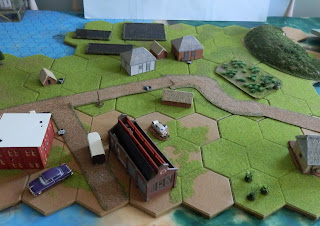 Village/factory including my 2 brand new battlefront Vietnamese huts.   Lt Pham's plan was to position their LMG on the hill with 2nd squad and have Tong advance towards the factory.  Tong wasn't thrilled with the plan. 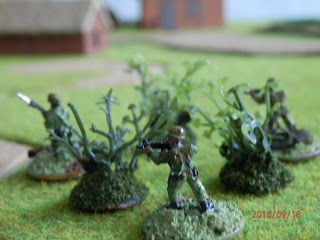 1st squad advances towards the factory... 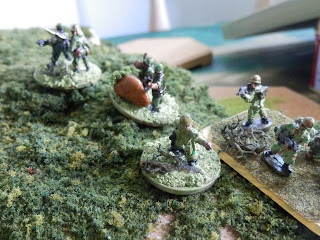 While 2nd squad with the officer's lapdog Chu waits safely on the hill.

40 yards from the factory pointman Tran Can sees movement and opens up with his rifle.  Unfortunately a LMG returns fire and 3 men go down.  Soon Sgt Dang is forced back dragging 4 casualties.  He wonders Where the hell is the mortar support!?!  ( Lt Pham could get it.  Second time in two games!)

With the attack faltering the LT sends 2nd squad on a sweep to the right. 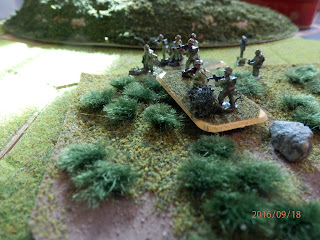 The are momentarily pinned but manage to... 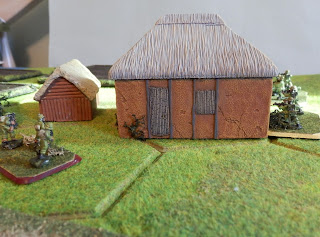 reach the stylish Vietnamese huts just as the VM get the same idea. 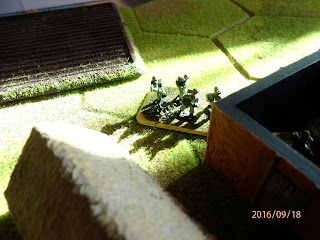 A rigorous hand to hand ensues with 2nd squad losing 3 against the VM's 1.

Sgt Trang is also forced to retreat.   Having failed along both sides, the ARVN platoon turns around and heads back to base.

Great battle but that is the second loss in a row.  They did feel a little better when a french platoon assaulted in the afternoon with the same result.  After the battle Sgt Dang manages to siphon off some ammo and give it to his government official friend.  Payback will be coming...
FNG Operations played well.  If it playtests well I will see if THW want's it or maybe release it free if they are okay with that.

For those that want to try the scenario I generated the following VM forces  ( 8/10 but random event dropped them to 8/8)
2 squads of 6 rifles with 1 Gr II leader and 1 Gr I leader.
1 LMG and 1 MMG